The bombing of two Bali nightclubs on October 12 last year caused 202 deaths, while destroying even more lives and any illusions that the Asia Pacific region might be immune from terrorism. This issue of the Journal commemorates the efforts of Australians involved in the aftermath of the bomb blasts.

Early on Sunday, 13 October 2002, a man with minor injuries arrived at Royal Darwin Hospital telling of his dramatic escape from a blast in Bali. The relative calm of the emergency department was about to be shattered. Palmer and fellow staff members recount what happened afterwards in the Australian hospital at the receiving end of our largest-ever offshore disaster (→ The Bali bombing: the Royal Darwin Hospital response).

Many victims were evacuated to Australia, as Balinese resources were rapidly overwhelmed and lacked specialist burns facilities. The complexities of coordinating the civilian aeromedical evacuation are described by Tran et al (→ The Bali bombing: civilian aeromedical evacuation). Qantas had a major role operating evacuation flights to return over 4500 people, including the injured, to Australia.

The grisly task of identifying severely burned and fragmented bodies at the bomb scene involved Australian experts such as Lain and colleagues (→ Forensic dental and medical response to the Bali bombing). Their report is not merely an account of the process but of their own responses to dealing with grieving relatives, others around them, and the sights, smells and political obstacles they encountered.

This issue canvasses some controversial aspects of stroke management: Hoffman's editorial asks whether enthusiasm for tissue plasminogen activator in acute ischaemic stroke has overtaken judgement (→ Tissue plasminogen activator (tPA) for acute ischaemic stroke: why so much has been made of so little), while previous MJA articles provoked some vigorous correspondence (→ Evidence-based care and outcomes of acute stroke managed in hospital specialty units).

Urinary iodine levels in a group of NSW children were on the low side. What does this mean? Guttikonda et al checked the children's thyroid volumes to find out (→ Iodine deficiency in urban primary school children: a cross-sectional analysis).

It was a hold-up, complained state premiers when asked by the federal government to sign the 2003 - 2008 Australian Health Care Agreements. Yet sign they did. So where does this leave our supposedly crisis-ridden health system? At the recent Australian Health Care Summit, health reform expert John Menadue AO gave a remarkably frank keynote address condemning leadership failure. His proposed solutions can be found in → Healthcare reform: possible ways forward, the first of several addresses at the Summit being published by the Journal.

Van Der Weyden echoes these sentiments, drawing on real life in NSW for an example of what happens when a state health minister uses his power for good, rather than being bedevilled by political inertia (→ Australian healthcare reform: ailments and cures). 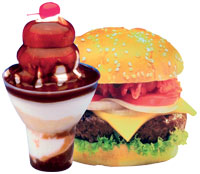 The MJA Practice Essentials — Endocrinology series starts now! The editorial by Series Editors Zajac and Chisholm foreshadows articles that will help us and policymakers catch up with the explosion of new endocrine tests and therapies (→ Endocrinology in the 21st century). Shaw and Chisholm discuss the epidemic of type 2 diabetes and metabolic syndrome: the photo says it all — or does it? (→ 1: Epidemiology and prevention of type 2 diabetes and the metabolic syndrome)

One black dog, many breeds

Mental Health Week and World Mental Health Day fall in the second week of October, and are marked by Parker's editorial on current diagnostic and treatment models for depression (→ Depressions black and blue: changing the Zeitgeist). Be prepared to have your paradigms challenged (and your vocabulary expanded)!

Even as students we all knew someone, sometime, whose dislocated shoulder was treated in a sling. But this time-honoured treatment may be sacrificed on the altar of evidence, according to Murrell's reading of recent studies (→ Treatment of shoulder dislocation: is a sling appropriate?).

The oracles also give short shrift to steam inhalation for croup, but they're a bit hazy on whether GPs should treat mild croup with oral steroids, say Fitzgerald and Kilham (→ Croup: assessment and evidence-based management). However, we do know the right moves for children with moderately severe croup turning up at the emergency department.