Treatment of shoulder dislocation: is a sling appropriate?

For thousands of years, perhaps even before Hippocrates, dislocated shoulders have been treated by using a sling with the arm internally rotated. Although, and perhaps because, this same treatment has been used for so long, there is little information on its efficacy. A number of studies of non-operative treatment for anterior shoulder instability have been unable to show that any given treatment is better than another, and all have been unable to reduce the rate of recurrence.1 Surgery has provided better outcomes in terms of preventing recurrence of shoulder dislocations,2 and even for symptoms of instability. A recent randomised clinical trial involving 40 patients and comparing sling immobilisation with arthroscopic surgery in first-time shoulder dislocation showed a recurrence rate in the surgical group of 16% at 2 years versus 47% in the sling group.3 Patients in the sling group whose shoulders had not redislocated also had worse functional scores than those in the surgical group. In particular, they were less able to participate, and performed at lower levels of sport and recreational activities than patients in the surgical group.

One reason for the poor outcomes in the non-operative treatment of dislocated shoulders may lie in their patho-anatomy, and the inability of non-operative methods to correct the problem. The labrum constitutes the fibrocartilagenous rim of the glenoid and contributes to shoulder stability by elevating the glenoid edge and providing attachment of the glenohumeral ligaments. When the shoulder dislocates, the major damage is disruption of the labrum and capsule from the anterior glenoid — a Bankart lesion4 (see Box 1). Most surgical procedures aim to reattach the Bankart lesion to the fibrocartilagenous rim of the glenoid. It was thought that, when treated non-operatively, this lesion was less likely to heal back to bone,5 explaining why surgical reattachment has much better rates of success.6

Recently, two independent research groups, one in Japan7 and one in Australia,8 have shown, using magnetic resonance imaging in patients and load sensors in cadavers, that by putting the arm in internal rotation — the way it is normally positioned in a sling — the labral detachment is actually more pronounced (Box 1[a]). However, when the arm is placed in external rotation, the labrum becomes reapposed to the glenoid rim (Box 1[b]). The Japanese study involved magnetic resonance imaging of shoulders with recent dislocations that were placed in both internal and external rotation.7 The Bankart lesion was more marked (detached) when the patients’ arms were internally rotated, and became far less obvious when they were imaged in external rotation. The second study artificially created Bankart lesions in cadaver shoulders and measured the force transmitted to the glenoid rim in different arm positions.8 There was no contact force generated on the glenoid edge when the arm was internally rotated, and maximal force when placed in 45 degrees of external rotation, indicating that the torn-off labrum was reapposed best when the arm was externally rotated. These studies may explain why recurrence rates are so high when an arm with a dislocated shoulder is placed in a sling, as in this internally rotated position the torn off labrum is not reapposed to the glenoid bone and is thus unlikely to heal to it.

Most recently, Itoi et al have shown in a randomised clinical trial that patients immobilised in 10 degrees of external rotation (Box 2) for three weeks following anterior dislocation had a recurrence rate of 0/20 at 13–15 months, compared with 6/20 when immobilised in internal rotation.9,10 It will be important to extend this trial and perform similar trials in other centres. We are in the era of evidence-based medicine (including surgery) and this work indicates that it is appropriate to challenge long-standing concepts with the outcomes of randomised clinical trials. 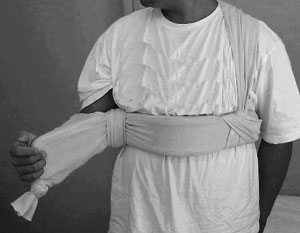 Digital photograph courtesy Professor Itoi, Department of Orthopaedic Surgery, Akita University School of Medicine, Akita, Japan. A video clip of how this splint is fitted is also available at www.ori.org.au/bonejoint/shoulder/ssfd/splint.mov