Setting, participants: All patients admitted with AMI (ICD‐10‐AM codes I21.0‒I21.4) to all public and most private hospitals in Australia and New Zealand during 2009‒2015.

Main outcome measure: All‐cause mortality up to seven years after an AMI.

Conclusion: AMI care in Australia and New Zealand is associated with high rates of long term survival; 7‐year rates exceed 80% for patients under 65 years of age and for those who undergo revascularisation. Efforts to further improve survival should target patients with NSTEMI, who are often older and have several comorbid conditions, for whom revascularisation rates are low and survival after AMI poor.

The known: Advances in care for patients with acute myocardial infarction (AMI) have reduced early mortality, but less is known about long term survival.

The new: In the first population assessment of long term survival in Australia and New Zealand, current AMI care was associated with 7‐year survival greater than 80% for patients under 65 years of age and those who underwent revascularisation. It was poorer for older patients with NSTEMI, for whom the revascularisation rate is low.

The implications: Improving survival after AMI will require multidisciplinary care of older patients, in whom multimorbidity is common, carefully balancing the risks and benefits of therapy.

Acute myocardial infarction (AMI) — ST elevation myocardial infarction (STEMI) and non‐ST elevation myocardial infarction (NSTEMI) — is a frequent cause of hospitalisation. Care for patients has advanced substantially during the past two decades, with highly sensitive biomarkers for rapid detection of disease,1 new antiplatelet and anticoagulant therapies,2 rapid access to coronary reperfusion and revascularisation facilitated by AMI networks of care,3,4,5 and better use of secondary preventive therapies6 improving outcomes for patients. The short term benefits of these interventions include lower early mortality.6,7

In contrast, less is known about long term survival after AMI in Australia and New Zealand; no national studies of survival have been reported, apart from follow‐ups of selected registry cohorts and state‐based evaluations.8,9,10 Population studies that provide unbiased estimates of long term survival are also sparse overseas.11,12,13,14 Robust estimates of contemporary survival and assessment of patient factors that may influence survival are critical for prognosis and for informing clinical and public health efforts to improve outcomes for patients. Accordingly, we assessed survival for up to seven years after hospitalisation with AMI by analysing national data from Australia and New Zealand, and evaluated a range of patient factors that influence long term survival.

We analysed data from the admitted patient data collections of each Australian state and territory and the New Zealand national minimum dataset (hospital events); these datasets record inpatient admissions to all public and an estimated 80% of private hospitals in the two countries. The datasets include data for a standardised set of variables, including patient demographic characteristics, primary and secondary diagnoses, procedures, and patient status at discharge. Previous studies have reported that management of AMI is broadly similar in the two countries.15,16 Diagnoses are coded according to the International Classification of Diseases, tenth revision, Australian modification (ICD‐10‐AM) and procedures according to the Australian Classification of Health Interventions (ACHI);17 the accuracy of administrative coding exceeding 85%.18 Data for New South Wales and the Australian Capital Territory, and for South Australia and the Northern Territory, were cross‐linked and treated as deriving from single regions.

We included adults (18 years or older) admitted to hospital with primary diagnoses of AMI (ICD‐10‐AM codes I21.0‒21.3 for STEMI, I21.4 for NSTEMI) during 1 January 2009 ‒ 31 December 2015. We excluded second and subsequent hospitalisations with AMI during the study period, patients with hospital lengths of stay of less than one day unless they had died or were transferred to another hospital (as they were unlikely to have had an AMI), and patients who discharged themselves against medical advice. Patients were stratified by AMI type (STEMI, NSTEMI), whether they underwent revascularisation, and by age group.

The study outcome was all‐cause mortality, including in‐hospital death, measured from the date of the AMI. In Australia, AMI hospitalisations were linked to jurisdictional deaths registries to track mortality after discharge. In New Zealand, hospital encounters are linked nationally by unique National Health Index numbers, and all deaths are recorded in the National Health Index socio‐demographic profile. Vital status was confirmed to 31 December 2015 for all patients, providing maximum follow‐up of seven years; data for patients still living at 31 December 2015 were censored.

Categorical variables are summarised as frequencies and proportions, continuous variables as means with standard deviations (SDs) if the data were normally distributed and as medians with interquartile ranges (IQRs) if they were not. Unadjusted event‐free survival curves were estimated by Kaplan‒Meier analysis. The influence of patient factors on long term survival was examined in a stratified Cox regression model; the proportional hazards assumption was met for all variables except AMI type (the effect of which varied with time). Patient factors included age, sex, presenting region, AMI type, revascularisation, and comorbid conditions (candidate variables for modelling: online Supporting Information, table 1). Comorbid conditions were defined according to the Condition Category classification, which groups ICD‐10 codes into 180 clinically meaningful conditions by selected secondary diagnosis codes for the index admission and primary and secondary diagnosis codes for hospitalisations during the preceding 12 months.19 Coronary revascularisation was defined as percutaneous coronary intervention (PCI) or coronary artery bypass grafting (CABG) within three months of an AMI, capturing all procedures related to the index event. All independent effects are reported as adjusted hazard ratios (aHRs) with 95% confidence intervals (CIs). Analyses were performed in SAS 9.4.

Overall 7‐year survival for people hospitalised for the first time with AMI in Australia and New Zealand during 2009‒2015 was 62.3%. The prognosis for patients under 65 years of age (38% of AMI hospitalisations) was excellent: 7‐year survival exceeded 85%. Long term survival was greater than 80% for patients with AMI who had undergone revascularisation, but was lower than 50% for patients who had not (a group that included 58% of patients with NSTEMI). Prognosis was poorer for older people; median survival for patients over 85 years of age was two years, considerably less than the general life expectancy for 85‐year‐old men (6.3 years in New Zealand, 6.4 years in Australia) and women (7.2 years in New Zealand, 7.5 years in Australia).20,21 Improving survival after AMI will require multidisciplinary care of older patients, in whom multimorbidity is common, carefully balancing the risks and benefits of therapy.

Our findings are based on the first population assessment of long term survival after AMI in Australia or New Zealand. There have been few population studies of long term survival after AMI. In the United States, 3‐year mortality among patients aged 65 years or more with NSTEMI was reported to be 40.3% during 2003–2006.14 In more recent data from England (2004–2010), 7‐year mortality was 31% for men and 47% for women (all ages) after a first AMI; overall mortality was probably higher, as patients who died within 28 days of an AMI (14% of the sample) were excluded.13 The best reported survival rates were for Sweden (2013‒2014), where 7‐year survival was about 70% for patients with STEMI and 60% for those with NSTEMI.11,12 The survival rates we report (76.2% at three years, 68.6% at five years, and 62.3% at seven years) exceed those reported in the United States and England, and are similar to the high rates in Sweden.

Improved, evidence‐based care is likely to explain the higher survival rates in Australia and New Zealand, where the use of secondary preventive therapies (statins, angiotensin‐converting enzyme inhibitors/angiotensin II receptor blockers, thienopyridine antiplatelet medications) has increased substantially since 2000.6,7,22,23 During 1999–2016, primary PCI rates for patients with STEMI in Australia rose from 43% to 71%,7 and a similar increase was reported in New Zealand.24 We found that 50% of patients with AMI had undergone revascularisation (PCI or CABG), a larger proportion than reported in England (20.4%)13 or the United States (43.3%),14 and similar to more recent revascularisation rates in Sweden.11,12 AMI networks of care, frequent inter‐hospital transfer,9 and high levels of access to timely reperfusion (over 90%)23 may explain our higher revascularisation rates. Nevertheless, fewer than one in two patients in Australia and New Zealand are referred to cardiac rehabilitation,25 suggesting an opportunity for further improving post‐AMI outcomes. Survival was poorer among women, a finding consistent with previous reports.26 We also found regional variation in survival, suggesting differences in AMI care.

The survival benefit of revascularisation was greater than determined by randomised clinical trials27 and should not be attributed to differences in revascularisation rates alone. Revascularisation is often not undertaken in very ill patients, in whom multimorbidity is common. Non‐cardiovascular comorbid conditions have rarely been fully considered by previous investigations, but we found that chronic diseases and age‐related factors, such as dementia and functional disability, influenced survival; the hazard ratios were often larger than for comorbid cardiovascular conditions. About one in five older people with AMI may be clinically frail,28 and frail patients are often excluded from clinical trials, receive less guideline‐based care, and experience more adverse therapy‐related events.

We found that one‐third of patients with NSTEMI did not undergo coronary angiography, although these patients have an absolute risk profile (14% mortality during the first year) that indicates high risk, and guidelines recommend an invasive approach as the standard of care.27 Patients who did not undergo coronary angiography were generally older than those who did, and comorbid conditions and age‐related syndromes associated with increased hazard of death were also more common in this group. These factors may explain the reluctance of clinicians to pursue an early invasive approach. However, the potential for absolute risk reduction with therapy is greatest for these patients. In an American study, for example, frail patients who underwent PCI or CABG were less likely to die in hospital than those who did not;28 longer term mortality was not assessed. The treatment of older people with AMI may therefore be suboptimal. Pragmatic trials in frail older patients with multiple comorbid conditions are needed to test approaches to improving outcomes and to study the effectiveness of conventional AMI therapies.

Administrative data are less specific than data collected for research purposes, but admitted patient data collections comprise the only source of national data in Australia and New Zealand. We could not include data from all private hospitals, but acute AMI care is rarely provided in private hospitals. Certain patient and presentation characteristics that may affect long term survival, such as the site and cause of infarct (type 1 or 2), left ventricular ejection fraction, thrombolysis, feasibility of revascularisation, secondary preventive therapies, body mass index, and other lifestyle factors (including smoking) are not recorded in administrative data. We did not examine the influence of socio‐economic status, ethnic background, or remoteness on survival.

In our population study of outcomes for patients with AMI in Australia and New Zealand, 7‐year survival was 62%. Survival was particularly good for patients under 65 years of age, and for those who had undergone revascularisation, for whom 7‐year survival exceeded 80%. Efforts to improve AMI care should target older patients with NSTEMI, who often have multiple comorbid conditions, and for whom revascularisation rates are low and the prognosis after AMI poor. 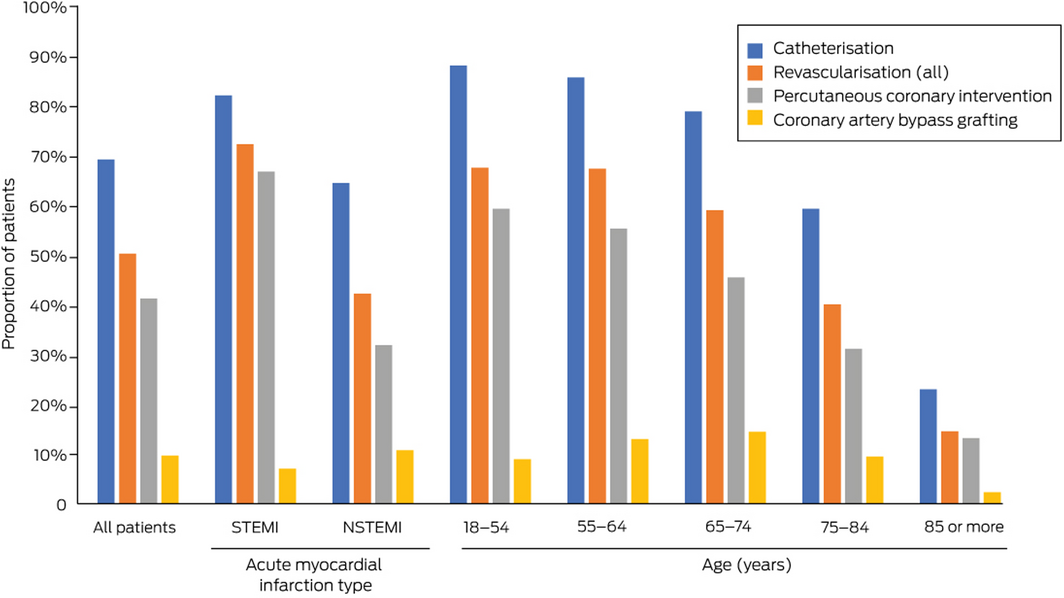 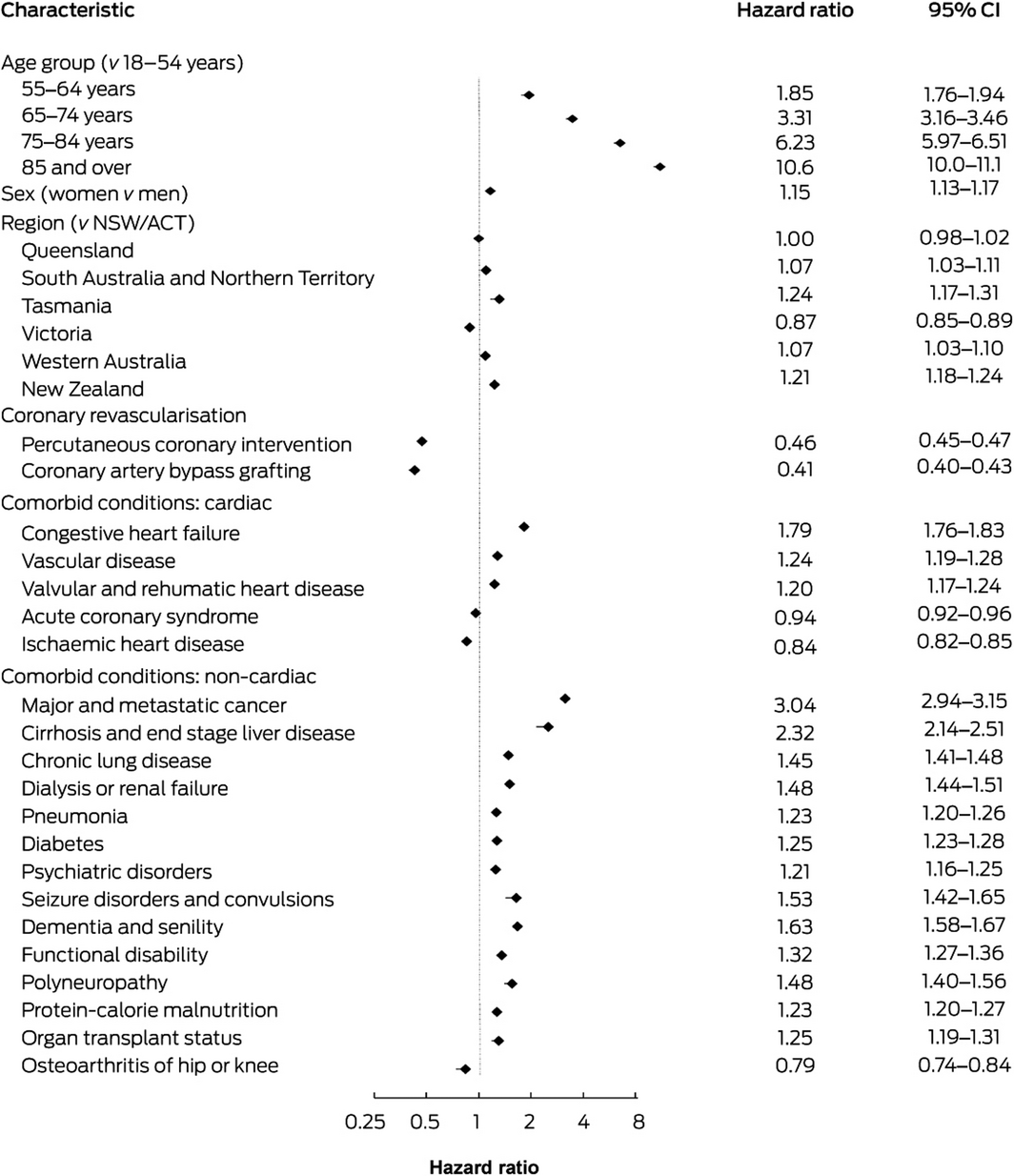 CI = confidence interval.
* The hazard ratio for infarction type (STEMI v NSTEMI) is not reported as it varied with time.