Iodine status of Indigenous and non‐Indigenous young adults in the Top End, before and after mandatory fortification

Objective: To assess the median urine iodine concentration (UIC) of young adults in the Top End of Northern Territory, before and after fortification of bread with iodised salt became mandatory.

The known: Iodine deficiency re‐emerged in Australia in the 1990s, motivating mandatory fortification of bread with iodised salt in 2009.

The implications: Although iodine fortification has generally been successful, targeted interventions are needed to improve intake by some Australians, particularly women of child‐bearing age.

Iodine deficiency returned as a significant public health problem in Australia during the 1990s.1 It had historically existed in the southeast of the mainland and in Tasmania,2 but deliberate strategies2 and unintentional iodine supplementation1 had led to its disappearance until it re‐emerged in some parts of Australia.3

Adding iodised salt to bread has been a strategy for improving population iodine levels at various times and locations since the mid‐20th century.2 In response to national data that indicated Australian children were mildly iodine‐deficient, fortification of salt used in bread has been mandatory across Australia since October 2009.4 Subsequently, several surveys of urinary iodine concentration (UIC) have indicated that this initiative improved the iodine status of children aged 8–10 years (internationally the sentinel age group for population iodine status assessment5). In the mainland states, national surveys found that the median UIC for younger children was higher in 2011–12 (177 μg/L)6 than in 2003 (104 μg/L).3 In Tasmania, the median UIC increased after voluntary replacement of salt in bread with iodised salt was introduced, and still further after it became mandatory.7

Prior to mandatory fortification, national data on the iodine status of the Australian adult population were limited to data for pregnant women.8 Iodine status was inferred from dietary data, as were the predicted effects of fortification options for adults.4 After fortification was introduced, biomedical data collected in national health surveys indicated that both the general Australian and the Indigenous adult populations had adequate iodine levels.6,9

The Life Course Program based in Darwin includes two complementary prospective cohorts: the Aboriginal Birth Cohort (ABC) and the non‐Indigenous Top End Cohort (TEC). The recruitment of the two cohorts has been described previously.11,12 Briefly, the ABC consists of 686 people recruited at birth, born to Indigenous Australian mothers at the Royal Darwin Hospital between January 1987 and March 1990.11 This group was followed up during 2006–200713 and 2013–15.14 The TEC comprises 196 non‐Indigenous people recruited and assessed during November 2007 – September 2009.12 Eligibility criteria were birth during 1987–1991 (ie, age‐matched with the ABC) in Darwin to a non‐Indigenous mother and residing in Darwin at the time of recruitment. The TEC participants were followed up during 2013–15, parallel to the follow‐up of ABC participants.15

The iodine status of the two cohorts was assessed before and after the implementation date for mandatory fortification. In this article, “pre‐fortification” refers to data from the 2006–2007 follow‐up of the Indigenous ABC group and the first assessment of the non‐Indigenous TEC group during 2007–2009, and “post‐fortification” to the 2013–15 follow‐up of both groups.

Comprehensive health assessments with the same procedures were undertaken in the participants’ communities of residence. Barefoot height was measured to the nearest millimetre with a portable calibrated wall‐mounted stadiometer, and weight in light clothing was measured to 0.1 kg with a digital electronic scale (Tanita TBF‐521) for calculating body mass index (BMI; kg/m2).

A random spot urine sample was collected and kept cool (on ice or in a refrigerator) until aliquoted into labelled microtubes and frozen (within 2 hours of collection); it was then transported to Darwin and stored at –80°C, before being transported on dry ice to the Institute of Clinical Pathology and Medical Research (ICPMR) at Westmead Hospital in Sydney. The ICPMR iodine laboratory participates in the External Quality Assurance Program, the Centers for Disease Control (United States) standardisation program for providing urinary iodine laboratories with independent assessment of their analytic performance, and is the regional reference laboratory for iodine assays in the Asia–Pacific region. Samples were subjected to ammonium persulfate digestion prior to assessment of iodine levels with the Sandell–Kolthoff reaction in microtitre plates.

Residence at the date of collection was classified as remote (remote community with an Aboriginal council) or urban (Darwin and rural towns). Women were classified as pregnant if they had reported they were pregnant when assessed or a birth was recorded in the NT Perinatal Collection registry up to 9 months after the assessment.

Median UICs (with interquartile ranges [IQRs]) were calculated for men and non‐pregnant women seen at either assessment time point, and separately for the subset of participants assessed on both occasions. The characteristics of this subset were compared with those of all available Indigenous and non‐Indigenous participants in Mann–Whitney U tests. UICs were log‐transformed as the distribution of values was skewed. The association between Indigenous status and area of residence was modelled by linear regression, with log‐normal iodine concentration the outcome variable, and Indigenous status, remoteness of residence, sex, and BMI the explanatory variables.

This study was approved by the Human Research Ethics Committee of the NT Department of Health and Menzies School of Health Research; this includes approval by the Aboriginal Ethics Subcommittee, which has the power of veto (ABC reference, 2013‐2022; TEC reference, 2013‐1986).

Among non‐Indigenous urban participants, the median UIC was significantly lower for non‐pregnant women than for men (P = 0.001); sex differences were not significant for remote (P = 0.08) or urban Indigenous participants (P = 0.07) (Box 3).

The median UIC among remote and urban Indigenous young people and urban non‐Indigenous young people in the NT Top End increased substantially after mandatory iodine fortification was introduced. However, the median UICs for remote Indigenous men and non‐pregnant women and for urban non‐Indigenous non‐pregnant women were still slightly below recommended levels. Our pre‐fortification data for the two cohorts are the only Australian data on the iodine status of non‐clinical adult populations.

Iodine fortification of salt used in bread is the most likely explanation for the increased urinary iodine levels. Our results are consistent with the change in urinary concentration predicted on the basis of the iodine concentrations in bread after fortification and the bread intake in remote areas reported in national surveys.16 The increase in dietary iodine intake by a non‐pregnant adult can be estimated from their body weight with a standard formula.17 For example, the estimated median intake by remote Indigenous women rose from 72 μg to 132 μg per day after fortification. Other possible explanations for increased urinary iodine levels include increased iodide levels in drinking water, greater consumption of dairy products and fish, and increased use of iodised salt. We did not assess fish or iodised salt consumption, but there were no changes in water sources in Top End communities during the study period. Bread consumption varies widely between individuals, and lower consumption could explain the smaller increases in some population groups.

The UIC interquartile range was generally broader after fortification became mandatory. This is expected, as the intervention added iodine to a dietary component that is not eaten in the same amounts each day. A similar phenomenon was observed in Tasmania during the voluntary iodine fortification program.18 Signs of iodine deficiency, such as intellectual impairment, are generally not evident in people with a mild deficiency. The UIC, however, is not an appropriate measure of the iodine status of an individual because it varies considerably according to time of day and recent intake, for example. Physical examinations and thyroid functions tests conducted as part of the comprehensive health check in our study did not find any abnormalities in participants (data not shown).

Despite the rises in median UIC with mandatory fortification, the values for women of child‐bearing age remained in the mildly deficient range; further, the median UIC for pregnant women was low, and the median UIC for pregnant Indigenous women in remote locations was less than half the recommended level for pregnant women, suggesting that iodine supplementation — recommended by the National Health and Medical Research Council for all pregnant and breastfeeding women19 — was not being practised. National surveys in Australia do not oversample pregnant women, so their characteristics cannot be explored in specific analyses. However, our limited data suggest that pregnant women living in previously iodine‐deficient parts of Australia may still be iodine‐deficient; this question requires further investigation.

The differences between our results and those of national surveys are probably explained by differences in the characteristics of participants in our Life Course Program, reflecting the fact that national and state‐level results can mask local variations. Most Indigenous people in the ABC live remotely (76%), and many reside either in remote communities with small populations (fewer than 500 people) or on outstations (fewer than 50 people). In the 2012–13 national study, only 40% of participants completed the biomedical component of the survey;20 further, the national study excluded some Indigenous communities “in the NT, in remote areas with a small number of Aboriginal and Torres Strait Islander households.”21

We found that the median urinary iodine concentrations of young people in the Top End of the NT increased following the introduction of mandatory fortification of bread in Australia. However, median levels for some groups, particularly pregnant women and women of child‐bearing age, remain in the mildly deficient range. Iodine requirements are greatest during pregnancy when the fetus is most vulnerable to the deleterious effects of iodine deficiency. Targeted interventions are needed to improve iodine intake in some sections of the Australian population, particularly women of child‐bearing age, to complement the broad population strategy.

Box 2 – Characteristics of men and non‐pregnant women who were assessed both pre‐ and post‐fortification, by Indigenous identification and location 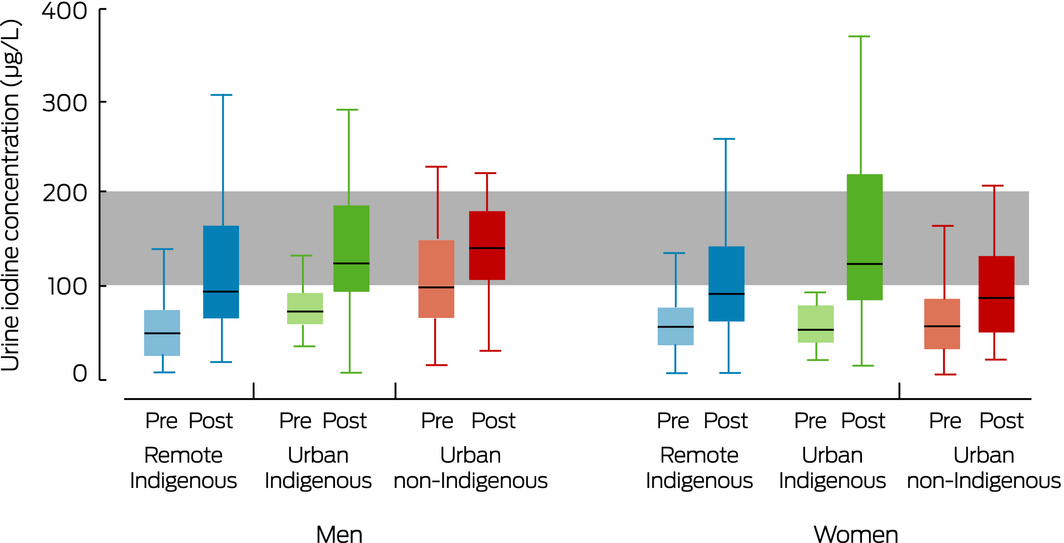 This investigation was supported by the National Health and Medical Research Council (APP1046391). We acknowledge past and present study teams who traced participants and collected the data, particularly the late Susan Sayers, founder of the ABC study. We thank Victor Uguoma for his statistical advice. We especially thank the young adults in the Aboriginal Birth and Top End Cohorts and their families and communities for their cooperation and support, and all the individuals who helped in urban and rural locations.