Improved iodine status in Tasmanian schoolchildren after fortification of bread: a recipe for national success

Design and setting: A cross-sectional urinary iodine survey of schoolchildren from classes that included fourth-grade students was conducted in Tasmania in 2011. Results were compared with surveys conducted before fortification and during a period of voluntary fortification.

Conclusions: Iodine status in Tasmania can now be considered optimal. Mandatory iodine fortification has achieved significantly greater improvements in population iodine status compared with voluntary fortification. However, surveys of schoolchildren cannot be generalised to pregnant and breastfeeding women, who have higher iodine requirements. Measurement of iodine status in population surveys is warranted for ongoing monitoring and to justify the appropriate level of fortification of the food supply into the future.

Iodine is an essential micronutrient required for thyroid hormone synthesis. Inadequate dietary iodine intake is associated with a spectrum of diseases termed iodine deficiency disorders. The most serious and overt consequences are neurocognitive disorders and endemic goitre.1 Urinary iodine excretion is a marker of recent dietary iodine intake and is typically used to monitor population iodine sufficiency. Population iodine status is considered optimal when median urinary iodine concentration (UIC) is between 100 µg/L and 199 µg/L, with no more than 20% of samples having UIC under 50 µg/L.1

Concern about the emergence of widespread mild iodine deficiency in Australia and New Zealand led to mandatory iodine fortification of yeast-leavened bread in 2009.2 Tasmania has a well documented history of endemic iodine deficiency, with iodine supplementation strategies implemented since the 1950s.3 The use of iodophors as sanitising agents in the dairy industry was thought to have provided protection; however, urinary iodine surveys of Tasmanian school children in 1998 and 2000 showed a recurrence of iodine deficiency.4

In this article, we describe the results of the 2011 urinary iodine survey of Tasmanian schoolchildren and compare these results to surveys conducted before fortification and during a period of voluntary fortification.

A cross-sectional urinary iodine survey of Tasmanian schoolchildren was conducted in 2011. Survey methods were comparable to those used during the period of voluntary fortification, as described elsewhere.5

A one-stage cluster sampling method was used to randomly select school classes that included fourth-grade students from all government, Catholic and independent schools in Tasmania (such classes may include children in third, fourth, fifth and sixth grade, as composite class structures are popular in Tasmania). A total of 52 classes (from 49 schools) were invited to participate. This included 42 classes that had been randomly selected for the final survey conducted during the period of voluntary fortification and an additional 10 classes randomly selected in 2011 to boost sample size. In total, 37 classes (from 35 schools) agreed to take part, representing a class participation rate of 71%. Of the 880 children in participating classes, 356 (40%) returned positive consent and 320 (36%) provided a urine sample for analysis. These participation rates are comparable with the rates reported from previous surveys.5

Spot urine samples were collected at home, returned to school and transported by a private pathology provider to a laboratory where they were frozen and stored. Batch analyses were completed by the Institute of Clinical Pathology and Medical Research, Westmead Hospital. UIC was measured using the ammonium persulfate digestion method based on the Sandell–Kolthoff reaction.6

UIC data from children of comparable age from prefortification surveys and from participants in the surveys from the voluntary fortification period were used for comparison with the data from this survey.

Data were analysed using Stata version 11 (StataCorp). Median UIC, interquartile range and the proportion of samples with UIC under 50 µg/L were calculated for each survey. To facilitate comparisons between medians and the proportion of UIC results under 50 µg/L across intervention periods (prefortification, voluntary fortification and mandatory fortification), data were combined from the two prefortification surveys (1998 and 2000) and from the four surveys conducted during the period of voluntary fortification (2003, 2004, 2005 and 2007). Differences in median UIC across intervention periods were compared using Kruskal–Wallis χ2 (corrected for ties) with post-hoc Wilcoxon rank-sum test.

Ethics approval was obtained from the Tasmanian Health and Medical Human Research Ethics Committee and the Department of Education Tasmania. Parent or carer consent was obtained for all participating children.

In the 2004 National Iodine Nutrition Study, a survey of schoolchildren found that Western Australia had the highest median UIC of all Australian jurisdictions, at 142.5 µg/L.9 Extrapolating the magnitude of increase in UIC from our surveys to that observed in WA would result in a UIC just under 200 µg/L (56 µg/L + 142 µg/L), which is at the upper level of the optimal range.1

To facilitate comparisons, the sampling method used in our 2011 survey was modelled on the method used in the surveys conducted during the period of voluntary fortification.5 Classes that included fourth-grade children were originally chosen as the sampling frame to be consistent with World Health Organization guidelines for assessing population iodine status.1 Staff from the Department of Education Tasmania advised that this age group would be sufficiently independent to provide a urine sample, while minimising self-consciousness likely in older children. It is yet to be seen whether the observed impact of mandatory fortification is representative of other population groups, such as adults. Published surveys of prefortification UIC of Melbourne adults offer a useful baseline for this purpose.10 The Australian Health Survey 2011–2013 is measuring UIC in adults and children across Australia, and we anticipate this will provide further evidence of the iodine status in the Australian population.

Comparisons with prefortification surveys should be interpreted with the knowledge that there were subtle differences in sampling methods. A two-stage stratified sampling procedure was adopted in the prefortification period (1998–2000), where schools and then students from within schools were randomly selected. Subsequent surveys used a one-stage cluster sampling method with classes that included fourth-grade students as the sampling frame. These sampling differences are not considered significant and have been discussed elsewhere.5 Any sample bias associated with factors such as socioeconomic status or geographic location is unlikely to affect the results, as an association between UIC and these factors has not been found previously.4

Although the 2011 results are consistent with iodine repletion in the general population, they cannot be generalised to high-risk subgroups such as pregnant and breastfeeding women, whose daily iodine requirements increase by about 40%.11 Prior research in Tasmania has shown persistent iodine deficiency in pregnancy despite the introduction of voluntary iodine fortification.12 Recent evidence suggests that while mandatory iodine fortification may have benefited breastfeeding women, only those consuming iodine-containing supplements had a median UIC in the adequate range.13 Future studies of iodine nutrition should specifically assess the adequacy in these groups. Similarly, ongoing awareness of the recommendation that pregnant and lactating women take 150 µg of supplemental iodine per day should not be overlooked, particularly in those parts of Australia where marginal iodine deficiency has been previously reported.14,15

Changes to the iodine content of food supply (such as the level of iodine in milk or the level of salt in bread) or shifts in dietary choice (such as a preference for staples other than bread) could jeopardise iodine status in the future.3,16 The value of ongoing vigilance in monitoring population iodine status has been highlighted by previous authors.12,17,18 In addition, monitoring iodine levels in the food supply will be required to inform future adjustments to the mandatory iodine fortification program. 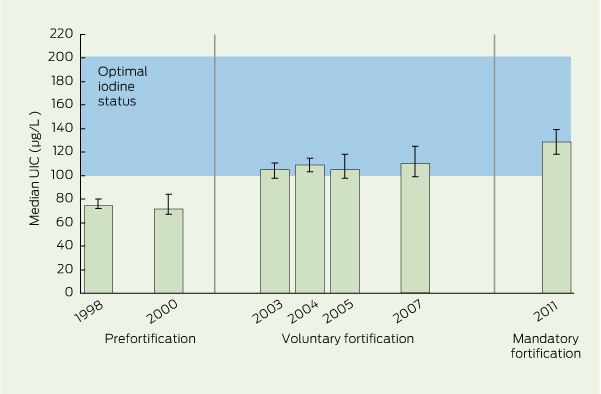 Permission was granted by the Tasmanian Department of Health and Human Services to use the 2011 urinary iodine survey data. Statistical analysis was undertaken by Michael Long. We are grateful to the school staff, parents, carers and children who participated in the urinary iodine surveys.