The re-emergence of mild iodine deficiency in Tasmania in the late 1990s1 led the state government to introduce a voluntary bread fortification program in 2001, under which the baking industry replaced regular salt in bread with iodised salt. This interim measure preceded the binational response to the widespread re-emergence of iodine deficiency in Australia and New Zealand, where iodisation of bread has been mandatory since 2009.

The impact of voluntary and mandatory fortification has been assessed in urinary iodine surveys of school children in Tasmania,2 consistent with the guidelines of the World Health Organization, the United Nations Children’s Fund, and the International Council for the Control of Iodine Deficiency Disorders.3 Representative samples of school children are assessed as a proxy group for the general population. Population iodine nutrition is considered adequate when the median urinary iodine concentration (UIC) is in the range 100–200 μg/L and fewer than 20% of samples have values under 50 μg/L.

The latest post-mandatory fortification survey was conducted during May–September 2016 (Human Research Ethics Committee [Tasmania] Network, reference, H0015521). Spot morning urine samples collected from 413 school children aged 8–10 years were analysed at the Institute for Clinical Pathology and Medical Research, Westmead (ISO-IEC 17025 accreditation). The median UIC was 130 μg/L; UIC was below 100 μg/L in 124 samples (30.0%) and below 50 μg/L in 13 (3.2%).

Improved iodine nutrition in regions formerly affected by mild iodine deficiency shows the success of fortifying bread with iodised salt as a method of population prophylaxis. After 7 years of mandatory fortification, the consistent median UIC from Tasmanian surveys indicates that the outcome of this public health initiative is stable and potentially sustainable. However, these conclusions cannot be extrapolated to all population groups, particularly pregnant and lactating women, as their greater requirement for iodine is unlikely to be met by mandatory fortification alone. The history of iodine nutrition in Tasmania indicates that ongoing monitoring of population iodine nutrition is needed to prevent a return to iodine deficiency. 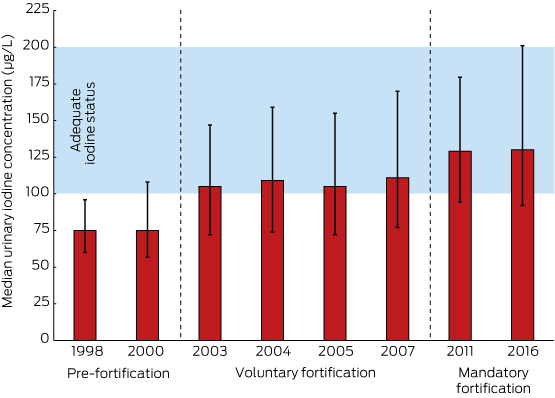 The 2016 Urinary Iodine Survey of Tasmanian Schoolchildren was funded by the Tasmanian Department of Health and Human Services.