Objective: To identify a level of iodine supplementation to recommend for pregnant and breastfeeding women in Australia.

Design, setting and participants: Dietary modelling indicated that mandatory fortification of bread with iodine by replacing salt with iodised salt would still leave a gap in iodine intakes in pregnant and breastfeeding women in Australia. Iodine shortfall was estimated by two separate methods: (i) analysis of data from published studies reporting mean urinary iodine concentrations in populations of Australian women who were pregnant or had given birth in the past 6 months; and (ii) modelling based on the postmandatory fortification iodine intake estimates calculated by Food Standards Australia New Zealand using food consumption reported by women aged 19–44 years who participated in the 1995 National Nutrition Survey.

Results: Estimations from both data sources indicate that a supplement of 100–150 μg/day would increase iodine intakes to a suitable extent in pregnant and breastfeeding women in Australia.

Conclusions: The final level of supplementation we recommend should be based on these calculations and other factors. There will be population subgroups for whom our general recommendation is not appropriate.

Dietary requirements for all nutrients are higher for women during pregnancy and lactation than when not pregnant or breastfeeding. During pregnancy, there is an increase of about 50% in maternal thyroxine production, a high rate of transfer of iodine and thyroxine from mother to fetus and increased maternal renal iodine clearance.1 Increased iodine requirements during breastfeeding allow for secretion of iodine in breastmilk. In Australia, the recommended iodine intake increases from 150 μg/day for non-pregnant adult women to 220 μg/day during pregnancy and 270 μg/day while breastfeeding2 (Box 1). The National Iodine Nutrition Survey conducted in 2003 and 2004 found that children living in south-eastern Australia were mildly iodine deficient.5 The results of several small contemporaneous studies of urinary iodine concentration in pregnant women were consistent with iodine insufficiency in pregnant women in the same states6-11 (Box 2).

Since October 2009, it has been mandatory to replace salt used in breadmaking with iodised salt, except in bread represented as organic.19 Food Standards Australia New Zealand (FSANZ) estimated that, in the general population of women aged 19–44 years, this strategy would increase mean iodine intake by 46 μg/day and reduce the proportion of women with inadequate intakes from 59% to 9%.19 Mean iodine intakes in pregnant and breastfeeding women were not calculated separately because there are too few of them in the dataset to allow separate estimation. Assuming that food consumption during pregnancy or lactation is the same as for the general population, FSANZ estimated that most of these women would still have inadequate intakes19 owing to their higher iodine requirements (Box 1).2

These concerns led to the National Health and Medical Research Council convening an expert group to consider if, and what level of, iodine supplementation should be recommended to pregnant and breastfeeding Australian women.20 As there is no nationally representative survey of iodine status in pregnant and breastfeeding women, the gap between the postfortification intake and the desirable intake was calculated using two different approaches and presented to the expert group. We describe these calculations and include more recent studies to update the information.

The two approaches we used to estimate iodine intake involved calculations based on (i) urine iodine concentrations and (ii) estimates of dietary intake. To this end, we selected 11 studies conducted before and/or after fortification of bread with iodine, that reported the median urinary iodine concentration (MUIC) in Australian women who were pregnant or had given birth in the past 6 months. To estimate iodine intake from diet, we used the datafile compiled by FSANZ using food consumption data from the 1995 National Nutrition Survey (NNS) and subsequent iodine analyses of food.

In addition to studies reporting MUIC data in pregnant Australian women6-11 described in earlier reviews,7,19,20 we identified four more recent studies13-16 and three reports on breastfeeding women (Box 2).13,12,17 One study (McElduff et al8) was excluded owing to the overlap of women with those of another study (Gunton et al6). Most studies took opportunistic samples from hospital clinics and did not describe whether women were using iodine supplements.

Pregnant women were recruited at stages of gestation ranging from early pregnancy to full term. Owing to lack of information about women’s weight in the studies, we applied a weight of 68 kg to all studies of pregnant women to back-calculate iodine intake from the MUIC. This allows for some of the weight gain during pregnancy compared with the reference bodyweight of 61 kg used to derive nutrient reference values for non-pregnant Australian women (Box 1).2 For simplicity, we used a target dietary intake of 250 μg (midway between the recommended daily intakes [RDIs] for pregnant and breastfeeding women) to calculate the gap in iodine intake in each study. The gap between calculated intake and the RDI of iodine for pregnant women (220 μg) or breastfeeding women (270 μg) can be determined by subtracting 30 μg from, or adding 20 μg to, respectively, the values shown in Box 2.

We performed dietary calculations using the datafile of iodine intake estimates (excluding supplements and corrected for within-person variation) generated by FSANZ during their work on iodine fortification.19 The prefortification estimate was calculated by applying the iodine content of Australian food analysed between 2001 and 2005 to the reported food consumption in the NNS. The amount of iodine in bread after mandatory replacement of salt with iodised salt (using an average of 45 mg iodine/kg salt), allowing for 10% loss of iodine with baking, was calculated for each woman based on her reported bread consumption.19

Because the data shown in the first five plots in Box 3 are not specifically for pregnant or breastfeeding women, the food-frequency data of key iodine-containing foods from a cohort study22 were also considered.

Before fortification of bread with iodine, the estimated gap between iodine intake and the target ranged from 84–172 μg/day (Box 2). Two studies were repeated after fortification. In Tasmania, after the implementation of a program that resulted in an estimated 80% of bread being made with iodised salt,18 the average gap was 113–121 μg/day compared with an average gap of 129 μg/day before the program was implemented.10 In Gippsland, there was no difference before and after the enforcement date for national mandatory fortification.16 The three small studies in breastfeeding women12,13,17 had MUICs at the lower end of the MUIC range for pregnant women.

Food-frequency data of key iodine-containing foods from a cohort study show that the intake of bread and dairy products is higher in pregnant and postpartum women, and this might increase iodine intake by about 20 μg/day compared with that of non-pregnant women.22 We added this to the 150 μg/day supplementation level in Box 3 (sixth plot) as an approximation for iodine intakes in pregnant and lactating women.

Results from analyses using urinary iodine concentration data or dietary modelling support a conclusion that iodine intake was inadequate in the locations studied before and after bread fortification. Despite using different data sources and assumptions, both methods identify a gap in iodine intake in the range of 100–150 μg/day. We believe that this is the first time that these types of complementary data have been used to derive an estimate of the level of iodine supplementation that should be recommended.

There are no urinary iodine concentration studies of pregnant or breastfeeding women in Western Australia and Queensland where the MUIC is between 100 and 150 μg/L in children.5 Studies such as those from Tasmania10,23 indicate that the MUIC in children provides an estimate of the MUIC in adults. MUIC in the range of 100–149 μg/L, while sufficient in children, indicates insufficiency in pregnant women.4 It is therefore possible that pregnant women in Western Australia and Queensland have insufficient iodine intake.

Most of the urinary concentration studies were in opportunistic samples of women. The large variation in MUIC among them may relate to differences in dietary intake, geographic influences such as the iodide content of local water, time of day when the samples were collected owing to diurnal variation in hydration, different stages of pregnancy of the women in the samples, or may have come about because some studies were conducted in tertiary hospitals while others were community-based.

There are few data about the dietary intakes of pregnant and breastfeeding women in Australia. Food frequency data in the 2003 Australian Longitudinal Study on Women’s Health showed similar consumption of key iodine-containing foods for both pregnant women and women after giving birth and these were slightly higher than consumption by non-pregnant women in the same cohort.22 Therefore, we believe that, in the absence of better data, the information from urinary concentration studies of pregnant women can be reasonably extrapolated to breastfeeding women to estimate their iodine intakes, and that the dietary data from the general adult female population do not substantially underestimate iodine intake in the groups of interest. Data on iodine intakes, urinary concentrations and supplement use are being collected in the 2011–2013 Australian Health Survey.25 The new data will show whether population iodine intake has changed substantially since 1995. This will allow some of the strategies aimed at improving iodine intake in the population to be assessed. Pregnant and breastfeeding women are not being oversampled which limits evaluation in these groups. A minimal effect on MUIC among pregnant women was reported after fortification.10,16 MUIC excludes additional iodine transferred to the fetus which may partly explain these results. The Tasmanian iodine fortification program achieved a smaller proportion of fortified bread than national regulation.10 The result from Gippsland16 is difficult to interpret without knowing when the samples were obtained and when bread fortification actually started during the year-long transition before the enforcement date in October 2009. Further information about current iodine status of pregnant and lactating women would be desirable.

Our calculations do not yield a single “correct” answer, but show the range of the gap in iodine intake. In addition to these numerical results (Box 2), other factors affect the supplement dose that should be recommended. A committee or organisation needs to consider what weighting should be given to each of the various non-representative studies, extrapolation of results in pregnant women to breastfeeding women and what prevalence of inadequate intake would be tolerable in the population. Other factors include whether a single recommendation to cover both groups could be made, whether the dose should be inflated to allow for missed days in supplement consumption, safety over the period of intended use for those with the highest dietary intakes, and whether it is possible to recommend a dosage that is currently available in the marketplace. A further consideration is how to factor in the uncertainty in the reference values (eg, the Food and Agriculture Organization/World Health Organization has the same recommendation for both groups [Box 1]) and the consequences of making or not making a recommendation.

In summary, two approaches using different types of data to estimate iodine intakes indicate that, after mandatory fortification of bread, supplementation in the range 100–150 μg of iodine per day would increase population iodine intakes in pregnant and breastfeeding Australian women to the levels recommended. The final recommendation depends on a range of other factors as well as these calculations. As with any population-level recommendation, there are subgroups for whom the general recommendation is not appropriate; in this case, women with established thyroid disorders. 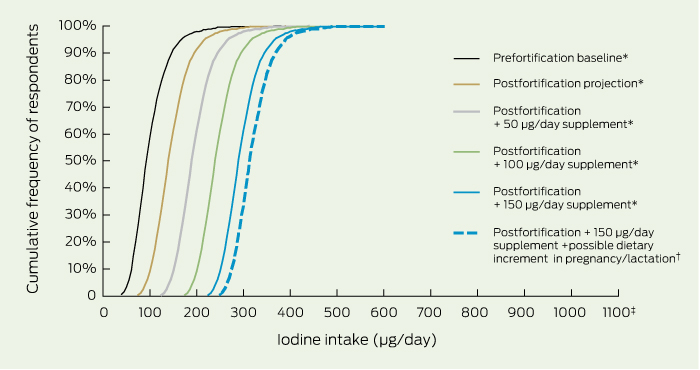 The upper level of intake recommended for adult Australian women is 1100 µg/day.2

We acknowledge permission from Food Standards Australia New Zealand to use the iodine intake datafile. Julie Boorman did the dietary modelling for the prefortification and postfortification iodine estimates that formed the basis for the current analysis.

The work for this study was done while we were both members of the National Health and Medical Research Council Expert Panel on Iodine Supplementation for Pregnant and Lactating women.