People in intensive care with COVID‐19: demographic and clinical features during the first, second, and third pandemic waves in Australia

Objective: To compare the demographic and clinical features, management, and outcomes for patients admitted with COVID‐19 to intensive care units (ICUs) during the first, second, and third waves of the pandemic in Australia.

Conclusion: The demographic characteristics of patients in intensive care with COVID‐19 and the treatments they received during the third pandemic wave differed from those of the first two waves. Adjusted in‐hospital mortality was highest during the third wave.

The known: The Delta variant of SARS‐CoV‐2 that emerged internationally in mid‐2021 was associated with higher mortality and greater demand for health care services than previous variants.

The new: The adjusted risk of dying in hospital was higher for people admitted to intensive care in Australia during the third COVID‐19 wave (second half of 2021) than during earlier waves, despite their lower median age and larger proportion without other medical conditions, and similar median severity of illness scores on admission.

The implications: Higher in‐hospital mortality during the third pandemic wave may have reflected the greater virulence of the Delta variant or the increased volume of COVID‐19‐related intensive care admissions.

The severe acute respiratory syndrome coronavirus 2 (SARS-CoV-2) has continuously evolved since its detection in 2019, with multiple discrete waves of infection and the emergence of new variants. At the same time, clinical practice has rapidly advanced with growing experience and the publication of several key trials.1,2,3 The impact of these changes on patients admitted to intensive care units (ICUs) in Australia has not been examined in detail.

National quarantine and social distancing measures constrained the number of SARS‐CoV‐2 infections during the first and second coronavirus disease 2019 (COVID‐19) waves in Australia,4,5 and hospital and ICU loads remained at near normal levels.6,7 However, the emergence of the Delta strain in mid‐2021 reduced the effectiveness of these measures, leading to increased community transmission.8 The aim of our study was to compare the demographic features, clinical presentation, management, and outcomes for patients admitted with COVID‐19 to ICUs during the first, second, and third waves of the pandemic in Australia.

We undertook a prospective, multicentre observational study of people aged 16 years or more admitted with polymerase chain reaction (PCR)‐confirmed COVID‐19 to the 78 Australian ICUs participating in the Short Period Incidence Study of Severe Acute Respiratory Infection (SPRINT‐SARI) Australia project.6 Data were collected using the case report form we have previously described6,7 and entered into a web‐based REDCap data management system, securely stored, and used for preparing regular reports. If a patient was transferred from one ICU to another ICU, the intensive care episodes were treated as a single ICU admission and the corresponding data combined.

ICU admissions were assigned to the first (27 February – 30 June 2020), second (1 July 2020 – 25 June 2021), or third COVID‐19 waves (26 June – 1 November 2021). The primary outcome of our study was in‐hospital mortality. Secondary outcomes were ICU mortality, ICU and hospital lengths of stay, and the use of supportive and disease‐specific therapies. We also collected information on patient and treatment characteristics, and on complications. Bed occupancy was defined as the proportion of beds in an ICU, as reported by the Critical Health Resources Information System (CHRIS), occupied by patients with COVID‐19.9 We extracted data for all patients admitted to 1 November 2021; outcomes data were censored at 8 December 2021. We report proportions based on the number of patients for whom data were available.

Time to ICU and hospital discharge is depicted in transition plots of outcomes; subdistribution hazard ratios for length of stay were estimated in a Fine–Gray competing risk model.10 ICU and in‐hospital mortality were compared in mixed effect, generalised linear models (binomial distribution), with ICU as first level and week of admission as the second level; we report risk differences (RDs) with 95% CIs.11 Duration of ventilation was compared in a quantile model (τ = 0.50), using an interior point algorithm;12 we report median differences with 95% CIs calculated after bootstrapping with 1000 samples.

Change in mortality risk over time by severity of illness (ventilated, non‐ventilated) was assessed in exponentially weighted moving average (EWMA) plots. The EWMA takes the entire history of a given output into account rather than treating each data point separately; each output (previous sample mean) is weighted, with the most recent samples receiving the greatest weight. The EWMA approach is sensitive to smaller and moderate shifts in the process assessed (here: in‐hospital mortality).13 We applied a weight of 0.005, with boundaries of predicted risk of three standard deviations. The predicted risk of death was derived from the admission APACHE II score, with admission attributed to respiratory infection. In the EWMA plot, we compared in‐hospital mortality to APACHE II‐predicted mortality to monitor changes over time. All analyses were conducted in R 4.0.3 (R Foundation for Statistical Computing).

The Human Research Ethics Committee of Alfred Health approved data collection and their analysis for this report, and waived the requirement for informed consent by individual patients (HREC/16/Alfred/59).

Characteristics of patients and admission processes

Crude in‐hospital and ICU mortality was similar during the three waves, except that in‐hospital mortality was greater during the third than during the second wave (281 of 1667 [17%] v 35 of 295 patients died [12%]; RD, 5.0 [95% CI, 0.62–8.8] percentage points) (Box 5; Supporting Information, figure 2). In adjusted analyses, risk of in‐hospital death was greater during the third than the first wave (RD, 9.60 [95% CI, 3.52–16.7] percentage points) (Box 6). Sensitivity analyses using different imputation strategies for missing data yielded similar results (Supporting Information, table 8), as did the transition plot of the status of patients up to 30 days after initial admission (Box 7). EWMA plots indicated that the period of higher mortality during the third wave was correlated with the peak in ICU admission numbers, and was chiefly linked with patients who received mechanical ventilation (Box 8).

Adjusted in‐hospital mortality among people admitted to intensive care with COVID‐19 was significantly higher during the third pandemic wave than during the first wave in Australia, particularly among patients who received mechanical ventilation. The peak in mortality risk corresponded to the peak in the number of ICU admissions. During the third wave, the median age of patients admitted to ICUs with COVID‐19 was lower, and larger proportions had no comorbid conditions or were pregnant than during the first two waves. During the third wave, a larger proportion of ICU beds were occupied by patients with COVID‐19 than in earlier waves, and non‐invasive respiratory support, awake and invasive prone positioning, and disease‐specific pharmacological therapies (eg, corticosteroids, interleukin‐6 antagonists) were used more frequently. ICU and hospital lengths of stay were each shortest during the third wave.

Our finding that adjusted in‐hospital mortality among patients with COVID‐19 admitted to ICUs was higher during the third wave than earlier in the pandemic in Australia7 may have several explanations: changes in the epidemiology of the pandemic, differences between states in non‐pharmaceutical interventions, and incomplete population vaccination that left some groups at greater risk of infection and severe disease. The SARS‐CoV‐2 Delta variant was more virulent than earlier strains14,15,16,17 and therefore more likely to cause disease requiring intensive care. It was also more transmissible and more likely to cause serious disease in younger people than previous strains, which had been greater threats for people over 60 years of age.15,18,19,20,21,22,23,24 We found that the median age of patients declined across the three waves, as did the proportion with other medical conditions, although median APACHE II scores on ICU admission were similar.

Pregnancy and obesity have been associated with increased risk of death from COVID‐19.18,25 We found that the prevalence of other risk factors for death, such as chronic cardiac failure and immunosuppression, was lower among intensive care patients with COVID‐19 during the third than during the first two waves. Despite evidence for the benefits of non‐invasive ventilation and awake and invasive prone positioning for patients with other disorders, these interventions may have had unexpected consequences for patients with COVID‐19, including delayed intubation. Some complications were more frequent during the third wave, such as bacterial pneumonia and pulmonary embolism, while others were less frequent, including bacteraemia, deep vein thrombosis, myocarditis, and cardiac arrhythmias.

The proportion of ICU beds occupied by people with COVID‐19 was larger during the third wave (19.1%) than during the second (4.6%) or first waves (2.8%). The greater number of patients, together with unmeasured factors (eg, re‐deployment of non‐ICU staff, ICU staff fatigue, limited ICU resources), may have reduced the capacity to provide usual health care.26 Importantly, we found that differences in mortality between waves were different for ventilated and non‐ventilated patients. The EWMA chart indicated that higher mortality during the third wave was chiefly among patients receiving mechanical ventilation, and was correlated with peak admission numbers. Health care systems overwhelmed by the number of people with COVID‐19, as in Italy and New York during the early phase of the pandemic, experienced inadequate resourcing and delays in admission to intensive care that were associated with higher mortality rates.27,28

Changes in ICU admission criteria may have led to selection bias, but median admission APACHE II scores were similar for all three waves. Data on bed occupancy were based on bed numbers prior to the re‐organisation of hospital facilities to meet the rise in demand. The SARS‐CoV‐2 Delta variant was predominant during the third COVID‐19 wave, but we did not have access to individual genotype information for patients. Further, as data on ICU resources, staff numbers, and non‐COVID‐19 ICU demand were not collected, we could not assess the overall hospital burden during each period, nor was information on other possibly relevant factors; for example, referral hospitals with the highest admission rates may also have been receiving the patients with the greatest clinical needs. Data from the first wave were derived from all states and territories, but from the second and third waves were almost exclusively from Victoria and New South Wales, reflecting the epidemiology of these two waves. Institutional characteristics not included in our analyses may have caused unmeasured confounding. Outcomes data were not available for all patients, but the results of sensitivity analyses using different imputation strategies were similar to those of our main analysis. Finally, as we did not adjust our analyses for multiple comparisons, all findings should be considered exploratory.

During the third COVID‐19 wave in Australia, the median age of patients admitted to intensive care was lower than during the first two waves, a larger proportion did not have other medical conditions, and the number who received less invasive therapies, including disease‐specific pharmacological treatments, was higher. Nevertheless, adjusted in‐hospital mortality was highest during the third wave; possible reasons include the greater virulence of the Delta SARS‐CoV‐2 variant, changes in public health measures, and the increased volume of COVID‐19‐related intensive care admissions, which may have hampered usual processes of care. Taken together, our findings reinforce the need to provide adequate resources and support for ICUs, particularly during times of unusually high demand. 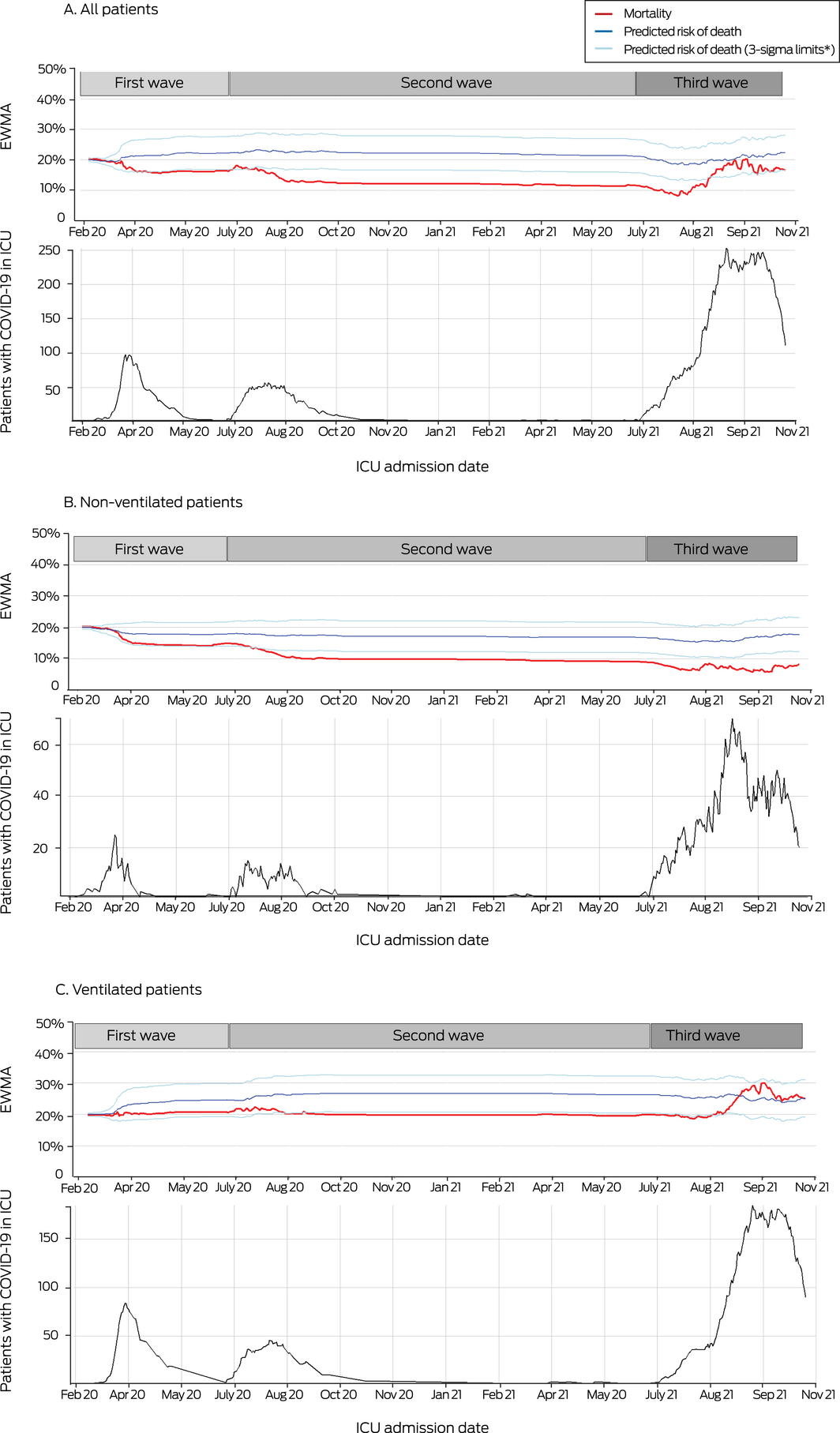 We thank the SPRINT‐SARI Australia investigators and all participating institutions (see full list at the end of the Supporting Information file).