Setting, participants: Subset of an adult population sample randomly selected in 2015 from the electoral rolls for the Newcastle and Gosford regions of New South Wales.

Conclusions: The prevalence of SR‐NCWS was similar in 2015 and 2018. Baseline (2015) and incident SR‐NCWS (2018) were each associated with functional gastrointestinal disorders. The number of people avoiding dietary gluten exceeds that of people with coeliac disease or SR‐NCWS, and general health considerations and abdominal symptoms are the most frequently reported reasons for avoidance.

The known: Self‐reported wheat sensitivity is common, affecting about 10% of people worldwide, but its incidence is not known. A notable proportion of people without coeliac disease avoid dietary gluten.

The implications: Many Australians unnecessarily subject themselves to gluten‐free diets. There is considerable overlap between people with non‐coeliac gluten sensitivity and those with functional gastrointestinal disorders.

Coeliac disease is an immune‐mediated systemic condition that affects about 1% of the Australian population.1,2,3 It manifests as a small intestinal enteropathy triggered by exposure to dietary gluten, for which the treatment is a lifelong gluten‐free diet.4 However, many Australians not diagnosed with coeliac disease also avoid gluten, having reported physiological symptoms they relate to gluten ingestion.1,5 Others avoid gluten because of its presumed general health benefits, despite evidence to the contrary.6,7,8,9

In recent years, non‐coeliac wheat or gluten sensitivity has been identified,10 characterised by gastrointestinal and other symptoms after ingesting wheat‐containing food that are not attributable to either coeliac disease (identified by serological testing and duodenal biopsy) or wheat allergy (IgE‐mediated immune allergy test).11,12 A formal diagnosis of non‐coeliac wheat or gluten sensitivity requires a labour‐intensive double blind crossover dietary challenge with gluten or wheat and placebo over at least 8 weeks,12,13 after which only a small fraction of people are found to have non‐coeliac gluten sensitivity.11 While specific clinical, serological, and pathological characteristics have been linked with the condition, no biomarkers have been established.14 Further, the relationship of non‐coeliac gluten or wheat sensitivity with other gastrointestinal disorders — including irritable bowel syndrome (IBS), functional dyspepsia, and wheat sensitivity disorders such as coeliac disease,15 wheat allergy, and eosinophilic oesophagitis16 — is yet to be defined.

A more practical working concept in clinical practice for people who report symptomatic benefit while on a gluten‐free diet is self‐reported wheat sensitivity (SRWS), or self‐reported non‐coeliac wheat sensitivity (SR‐NCWS) if coeliac disease has been excluded.17 The reported prevalence of SR‐NCWS ranges between 4.3% and 14.9%, with a pooled global prevalence of about 10%.17 We have previously reported significant overlap between SR‐NCWS and functional gastrointestinal disorders; 45% of people with SR‐NCWS fulfilled criteria for either functional dyspepsia or IBS.5 However, data on the incidence or natural history of SR‐NCWS have not been published.

Our aims in this study were to define the incidence of and factors associated with SR‐NCWS. We also aimed to describe the prevalence of gluten or wheat avoidance in the general Australian population and the reasons for avoidance.

The participant group was a subset of a general adult population group who responded to our 2015 Digestive Health and Wellbeing postal survey.5 In brief, 8499 adult participants (aged 18 years or more) were randomly selected from electoral rolls for the Newcastle and Gosford regions (metropolitan cities and their surroundings in coastal New South Wales; inclusion on the electoral roll is legally required for all Australian adults), of whom 3542 accepted invitations to participate in the 2015 survey.5 In 2018, we forwarded a second questionnaire to the 2330 respondents who had indicated they were willing to be contacted for follow‐up.

We forwarded participants the Digestive Health and Wellbeing survey in both 2015 and 2018 (Supporting Information). The survey included questions about a variety of factors:

Data linkage facilitated comparison of responses by participants to the two surveys.

A total of 2330 participants were forwarded the 2018 Digestive Health and Wellbeing survey in early 2018; we employed the Dillman total design method for following up non‐responders.20 The follow‐up protocol included a reminder/thank you letter mailed to all participants in week 1, a replacement survey sent to non‐responders in week 4, and a reminder/thank you letter sent in week 5 to those who had not responded by week 4. Participants received no remuneration for participation.

We have reported the first study to examine incidence and resolution rates of SR‐NCWS. The overall prevalence of SR‐NCWS according to the 2015 and 2018 surveys was similar (about 14%); similar proportions of surveyed participations reported new wheat sensitivity in 2018 (69 of 1301 respondents, 5.3%) or that their former wheat sensitivity was no longer evident (74 of 179 respondents in 2015, 5.7%). The factors associated with new SR‐NCWS were being younger or female, and having functional dyspepsia, each of which have also been associated with SR‐NCWS in other cross‐sectional prevalence studies.5 Functional dyspepsia was associated with lower odds of SR‐NCWS resolving between the two surveys, as was being male. IBS was associated with having SR‐NCWS in 2015.5 As being younger or female, which were associated with both baseline and incident SR‐NCWS, are recognised risk factors for functional gastrointestinal disorders,21,22 our findings are consistent with an epidemiological association between IBS and SR‐NCWS.

We found that almost one‐quarter of respondents were currently avoiding dietary wheat or gluten, but the prevalence of coeliac disease in Australia is only 1%. A 2016 Australian dietary survey with more than 86 000 adult participants (women, 73%) found that 12.1% were avoiding either wheat or gluten.23 Although this study was based on a voluntary online survey and therefore subject to ascertainment bias, the fact that this proportion was lower than our finding suggests that the number of people choosing to avoid wheat or gluten has increased. This interpretation is supported by an American study that found the prevalence of gluten‐free diet adherence had risen from 0.6% in 2009 to 2.1% in 2014, while the prevalence of coeliac disease was stable;24 these figures, however, are considerably lower than those for people reporting wheat‐ or gluten‐free diets in Australia (total avoidance by 3.8% of participants in our study).

Gluten avoidance was associated with having IBS in our study. Wheat is a source of fructans, food components excluded by the low FODMAP (fermentable oligo‐, di‐, monosaccharides and polyols) diet; as FODMAPs have been linked with symptom generation in IBS, this diet is now standard treatment for people with this disorder.25,26 Many people with SR‐NCWS are sensitive to fructans rather than gluten,27 which may explain the epidemiological overlap between SR‐NCWS and IBS.5 The relationship between functional dyspepsia and SR‐NCWS is less clear. Both gluten and fructans have been associated with functional dyspepsia in observational studies,28 and some patients with functional dyspepsia were found to have formal non‐coeliac gluten or wheat sensitivity in dietary crossover trials.29 Duodenal eosinophilia occurs in people with functional dyspepsia or non‐coeliac gluten or wheat sensitivity, suggesting a pathophysiological link.30,31

We found that the predominant motives for avoiding dietary wheat or gluten included general health and averting adverse reactions, which may explain why many more people avoid wheat or gluten than have coeliac disease or SR‐NCWS. A cross‐sectional survey of 99 Americans adhering to or who had previously adhered to gluten‐free diets identified weight loss, general health and well‐being, curiosity, and acne, narcolepsy or migraine prevention as motives, none of which have established connections with wheat ingestion.32 A large cross‐sectional survey in Argentina found that 0.9% of people (95% CI, 0.5–1.6%) chose gluten‐free diets for reasons unrelated to gut sensitivity, including weight control or general health.33

Identifying genuinely wheat‐sensitive individuals is important because the gluten‐free diet has a number of potential disadvantages, including adverse effects on cardiovascular risk, higher rates of micronutrient deficiency, and even increased ingestion of toxins such as arsenic.7,8,9,34,35,36,37 That gluten avoidance improves weight control or general health is not supported by published evidence. An Italian study found a high rate of metabolic syndrome in patients with newly diagnosed coeliac disease one year after commencing a gluten‐free diet (29.5%, compared with 2% at the start of the gluten‐free diet);8 a systematic review, however, did not identify similar findings in other studies.9 This is reassuring for patients with coeliac disease who require gluten‐free diets.

However, the safety of a gluten‐free diet for people with coeliac disease does not indicate that it has health benefits for those who do not, and few investigations of this question have been published. A study that assessed gluten intake in a large population sample (110 017 participants) with a validated food frequency questionnaire found that increasing estimated gluten consumption was associated with lower cardiovascular risk (highest v lowest gluten intake quintiles: adjusted hazard ratio, 0.85; 95% CI, 0.77–0.93).38 Together with our findings, this suggests that a large proportion of people in Australia avoid gluten or wheat for reasons of weight control or general health without convincing evidence supporting this choice.

Our study had a number of strengths, including the large sample size and high response rate at follow‐up. However, many of the comorbid conditions included in the risk factor analyses (including coeliac disease) were self‐reported, and dietary gluten avoidance was not examined in the initial survey, which prevented our estimating its incidence. The participants were from metropolitan areas, and our results may not be generalisable to rural or remote locations. Further, the 2015 cohort was probably representative of the population from which it was drawn, but the final 2018 cohort may have been subject to ascertainment bias, as it comprised people who were willing to return both the 2015 and 2018 questionnaires. Finally, surveys 3 years apart yield only partial insights into the natural history of SR‐NCWS and do not provide details about time to resolution of SR‐NCWS in affected participants.

Self‐reported non‐coeliac wheat sensitivity is common, and its prevalence in our population sample was similar in two surveys undertaken 3 years apart. Irritable bowel syndrome was strongly associated with baseline (2015) and functional dyspepsia was associated with incident (2018) SR‐NCWS. Gluten avoidance is also common, with 24% of our sample avoiding dietary wheat or gluten. 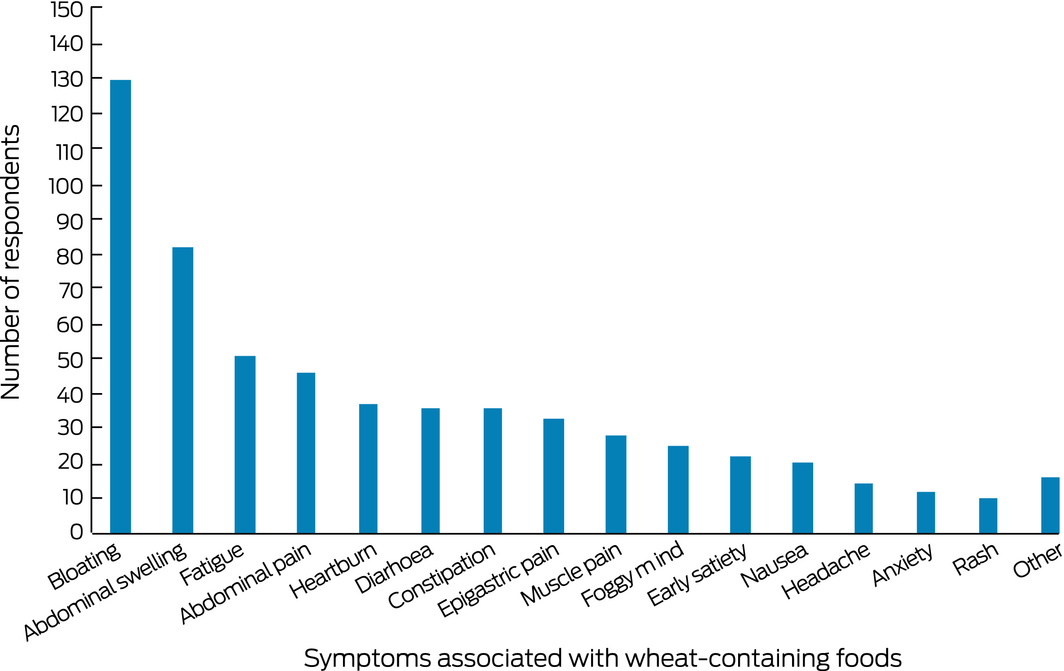 *Respondents could cite more than one symptom. 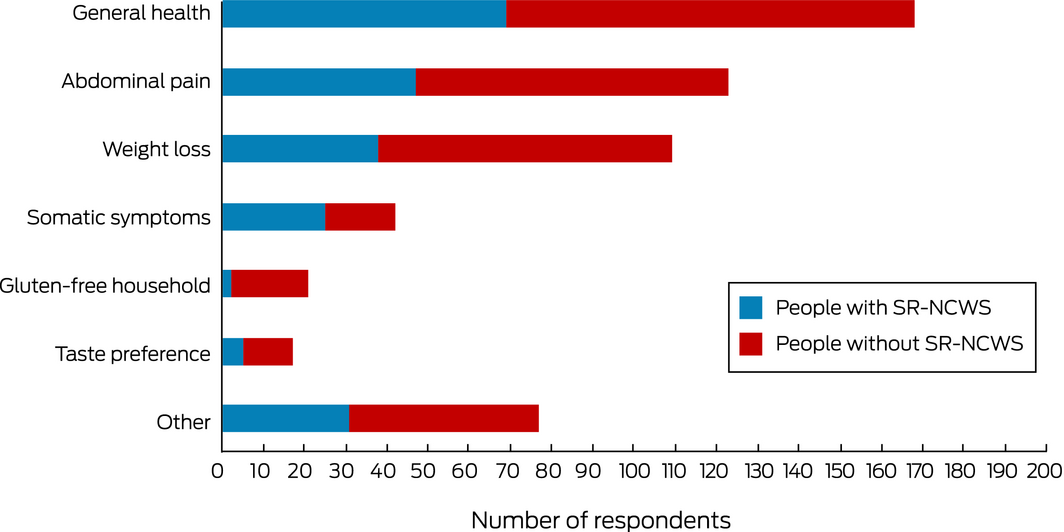 *Respondents could cite more than one reason.

This project was partially supported by a grant from Prometheus Laboratories.