The new: Frailty is common in Australian and New Zealand ICUs, affecting 39.7% of patients more than 80 years of age for whom frailty data were available. Frailty in these patients is associated with increased likelihood of death in hospital and of new admission of survivors to nursing home or chronic care facilities.

The implications: Intensive care and community health care planning needs to take into account that by 2030 more than one‐quarter of patients in Australian ICUs will be aged 80 years or more.

The number of older Australians will increase significantly over the next two decades; by 2036, the number of people aged 85 years or more will have doubled to one million.1 The demographic character of hospitalised patients, particularly the critically ill, will consequently change. The mean age of patients in intensive care units (ICUs) in our region is climbing rapidly, and it is forecast that by 2030 26% of all people admitted to Australian ICUs will be aged 80 years or more.2 This demographic change is likely to be accompanied by a shift in ICU practice, from a focus on managing patients with acute, reversible illnesses to caring for people, many near the end of life, with exacerbations of chronic disease.

One of the major challenges in caring for critically ill older people is frailty,3 a multidimensional syndrome characterised by reduced capacity to deal with external stressors. Frailty is common among critically ill older people; more than 40% of ICU patients over 80 are frail.4 Frailty in people with critical illness is associated with particularly poor outcomes: it doubles the risks of death and functional dependence, significantly increases health care use, and reduces quality of life.3,5,6 Neither the prevalence of frailty among older ICU patients nor the implications of our ageing populations for ICU resourcing and outcomes for frail older patients have been comprehensively explored in our region.

Accordingly, we conducted a multicentre retrospective cohort study of older patients in more than one hundred ICUs in Australia and New Zealand. We describe the demographic features and the admission characteristics and outcomes for frail ICU patients aged 80 years or more. We hypothesised that mortality would be greater among frail than non‐frail patients, and that a larger proportion would be discharged to residential care rather than home.

We conducted a retrospective population‐based cohort study, analysing data from the Australian and New Zealand Intensive Care Society (ANZICS) Adult Patient Database, which includes data on more than 80% of all admissions to ICUs in Australia and New Zealand.7 Data was gathered by the ANZICS Centre for Outcome and Resource Evaluation, which manages a clinical registry of participating ICUs for benchmarking purposes. Data dictionary use and automated validity checks were obligatory, and ongoing training and quality assurance review was provided for data abstractors.

All patients aged 80 years or more when admitted to an ICU between 1 January 2017 and 31 December 2018 were included in the study. Patients were excluded if they had been admitted to an ICU for organ donation or palliative care only. Only the first ICU admission during a hospital stay was included. Demographic data collected during ICU admission included age, sex, height, weight, admission diagnosis, limitations of medical treatment (because of patient wishes or medical futility; eg, not for intubation or cardiopulmonary resuscitation), Acute Physiology and Chronic Health Evaluation (APACHE) II and III‐j illness severity scores,8 and Australian and New Zealand Risk of Death (ANZROD) scores.9

Frailty was measured with a modified version of the Canadian Study of Health and Aging Clinical Frailty Scale, a judgement‐based nine‐point categorical scale found to be valid and reliable for assessing frailty in a variety of populations, including critically ill patients.3,10 The eight‐point Clinical Frailty Scale (CFS), the most used frailty measure in ICUs,11 categorises patients as CFS 1 (very fit), CFS 2 (well), CFS 3 (managing well), CFS 4 (vulnerable), CFS 5 (mildly frail), CFS 6 (moderately frail), CFS 7 (severely frail), or CFS 8 (very severely frail).10 We dichotomised scores according to accepted definitions, defining patients as frail (CFS 5–8) or non‐frail (CFS 1–4).3 Since 2017, frailty has been a non‐mandatory variable measured at the time of ICU admission, depending on the patient's level of physical function in the two months preceding admission. Scores were assigned by data collectors in each participating ICU from the clinical record; no specific education in CFS measurement was provided.

Results are reported as counts (with proportions), means (with standard deviations [SDs]), or medians (with interquartile ranges [IQRs]); comparisons of data for frail and non‐frail patients employed χ2 tests for binary and categorical data, two‐sample t tests for normally distributed data, and Wilcoxon rank‐sum tests for non‐normally distributed continuous data. Sensitivity analyses assessed the association between frailty and mortality, with sites assigned to three groups according to completeness of coding for frailty (< 10%, 10–50%, > 50%).

The primary outcome was in‐hospital mortality; secondary outcomes were length of stay (in hospital, in the ICU), re‐admission to the ICU during the same hospital admission, and discharge destination (including new chronic care or nursing home admission). Unadjusted and adjusted associations between frailty status and in‐hospital mortality were examined by mixed effects logistic regression, and results reported as odds ratios (OR) with 95% confidence intervals (CIs); associations between frailty status and discharge to a new nursing home or chronic care facility were assessed for patients who left hospital alive. All multivariable analyses were adjusted for region, sex, hospital type, and severity of illness (estimated with the ANZROD model),9,12 with patients clustered by site, and site treated as a random effect. ANZROD is a locally derived mortality prediction model that includes age, diagnosis, acute physiological disturbance, chronic comorbid conditions, and treatment limitations as factors, and applies separate regression equations for each major diagnostic group. It accurately predicts mortality of Australian and New Zealand ICU patients, and is well calibrated and has good discrimination (area under the receiver operating characteristic curve greater than 0.9 when applied to the entire ICU population).7 Statistical analyses were performed in Stata 15.1 (StataCorp) and SAS 9.4 (SAS Institute).

Rates of ICU re‐admission were similar for frail and non‐frail patients (4.4% v 4.1%); mean lengths of ICU and hospital stay were slightly longer for frail than non‐frail patients, and frail patients were more frequently discharged to a new nursing home or chronic care facility (4.9% v 2.8%) (Box 5). After adjusting for sex, baseline severity of illness, and variation between regions and hospital types, frailty in patients discharged alive from hospital was associated with an increased risk of discharge to new nursing home or chronic care (adjusted OR, 1.61; 95% CI, 1.34–1.95) (Box 6).

The prevalence of frailty among our patients (39.7%) was comparable with that reported by a European study of 5000 ICU patients aged 80 years or more (43.1%);4 the authors of the largest systematic review of frailty in critically ill adults (3030 patients aged 18 years or more) reported a lower pooled frailty prevalence (30%).13 We found that frailty was more frequent among women than men (44.6% v 35.4%), as previously reported for various populations, including ICU patients;3,14 various lifestyle, biological, and inflammatory factors have been invoked to explain this difference.15

Our adjusted odds ratio for in‐hospital mortality (1.87) is similar to the in‐hospital mortality relative risk reported by the large systematic review of frailty in adult ICU patients (1.71; 95% CI, 1.43–2.05).13 Overall in‐hospital mortality in our study (11.9%), however, was considerably lower than reported for other populations of critically ill older patients. In a 2014 study of 28 000 Victorian ICU patients aged 80 years or more, mortality was 24.1%;16 in a 2009 study of 15 000 Australian and New Zealand ICU patients aged 80 years or more, it was 25%.17 Mortality was 22.1% in a recent study of very old European ICU patients,4 and 35% in a similar Canadian study.18 The reason for the lower number of deaths in our study is unclear, but may be related to population differences (eg, the prevalence of sepsis was lower in our study than in other reports), the inclusion of patients with less severe illness (mean APACHE III score: our study, 61.3 v 2009 study, 67.517), and recent improvements in ICU outcomes.

We found that the proportion of patients with limitations of medical treatment on admission was larger for frail than non‐frail ICU patients, consistent with other studies,3,4,19 suggesting that clinicians more frequently apply restricted goals of care to older critically ill patients who are frail.

Our finding that a greater proportion of frail than non‐frail survivors of critical illness were discharged to residential care (7.6% v 3.1%) is consistent with the findings of the systematic review mentioned above (relative risk of home discharge [416 frail, 912 non‐frail patients], 0.59; 95% CI, 0.49–0.71).13 Our finding that the incidence of new residential care admission was higher for frail patients (4.9% v 2.8%), however, is novel.

The frailty measure we applied, the CFS, is the most employed frailty instrument in ICUs, and has been validated in a variety of hospital and community health care settings.9,20 We have recently reported that the CFS can be used to measure frailty in critical ill patients across the spectrum of health domains, and its performance in ICU patients is comparable with that of comprehensive multidimensional frailty assessment tools.21 Interest in using hospital coding data to generate automated frailty indexes is growing; for example, the Modified Frailty Index (mFI) was recently employed in a Brazilian study including more than 130 000 ICU patients.22 Nine of 11 variables in the mFI, however, are comorbid conditions, and it does not include information on important domains of frailty, such as mobility impairment, malnutrition, and cognitive deficits. Before such screening tools can be adopted in ICUs, it is important that they are validated against accepted frailty scales.

Implications of our findings

We found that frailty is prevalent among critically ill patients aged 80 years or more in Australia and New Zealand, and that it is associated with higher rates of in‐hospital mortality and discharge to residential care. That the risk of new residential care admission is 1.6 times as high for frail as for non‐frail very old patients suggests that post‐recovery impairment is greater for frail patients, a finding with major implications for health care and community resource planning for frail survivors of critical illness. We estimate that 9000 frail patients aged 80 years or more are admitted to participating ICUs in Australia and New Zealand each year, of whom 1600 die in hospital and 450 are discharged to new nursing home or chronic care.

Our study is the largest to have applied the Clinical Frailty Scale to very old critically ill patients, and the first large scale study of frailty in ICUs in Australia and New Zealand. The binational database upon which the study is based is large, and its data are regularly audited and validated, ensuring their high quality. However, we reviewed medical records to assign frailty scores, whereas previous CFS‐based studies have interviewed patients or their relatives.3,10 Inaccurate CFS scoring was therefore possible, although substantial inter‐rater reliability in CFS scores assigned on the basis of ICU medical records has been reported.23 Further, CFS scores based on chart review are comparable with scores based on direct ICU patient interview;24 the accuracy of retrospective CFS scores obtained in this manner, when compared with scores assigned after comprehensive geriatric medical assessments, has also been reported.25

A further limitation was that frailty status was not available for most ICU patients, as CFS reporting, a relatively recent addition to the ANZICS dataset, was not mandatory in the participating ICUs. However, differences in baseline characteristics and outcomes between patients with and without known frailty status were small and not clinically relevant. For example, overall in‐hospital mortality (11.9% v 12.9%), median APACHE III scores (58 v 59), and Australian and New Zealand Risk of Death score (4.9 v 5.0) were all similar for patients with and without frailty scores, and the distributions of diagnostic categories were also similar (Supporting Information, table 1). Further, frailty was associated with higher in‐hospital mortality both overall and when assessed in groups of ICUs classed by the degree of completeness of frailty score recording (except for ICUs with completion rates below 10%; however, the small proportions of patients with frailty data in these ICUs renders comparison difficult) (Supporting Information, table 5). 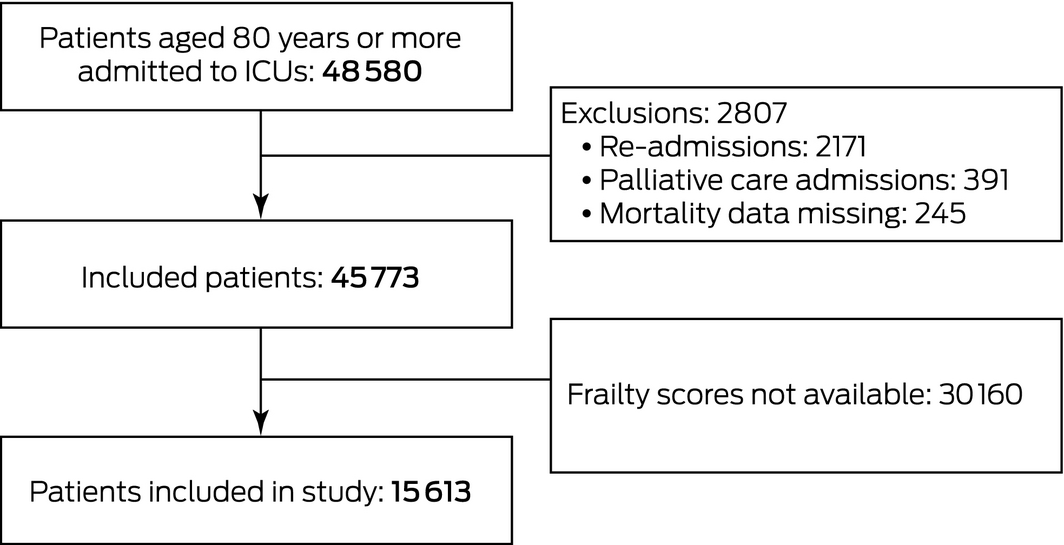 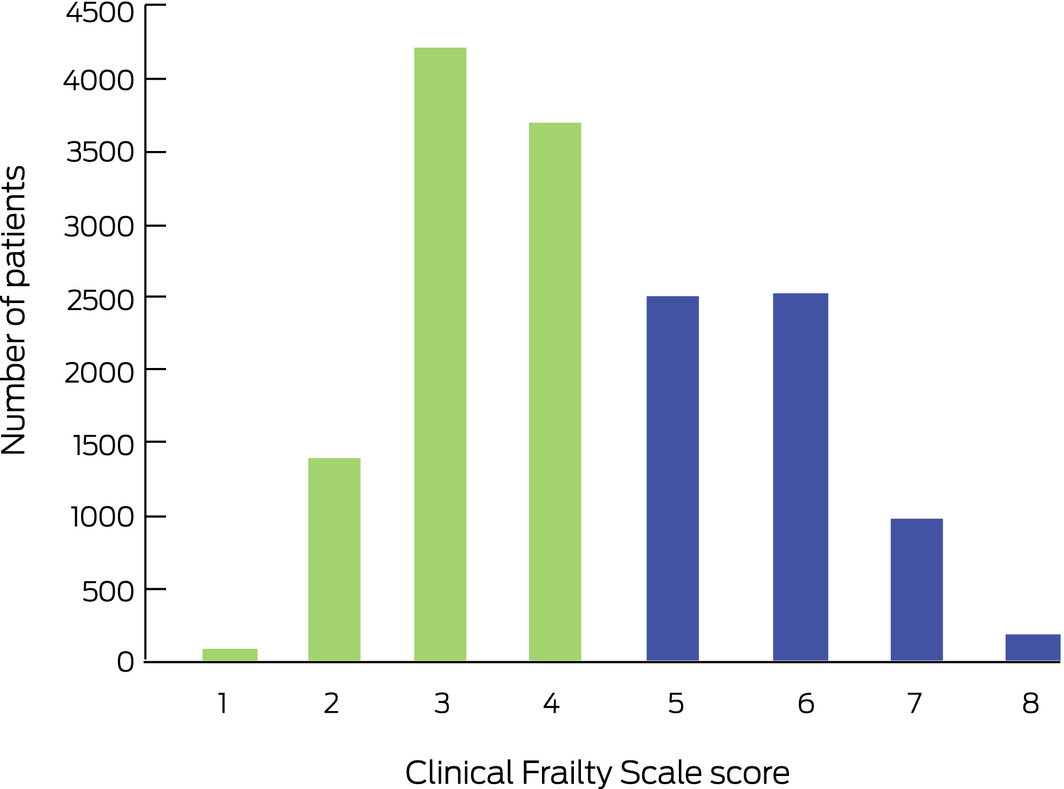 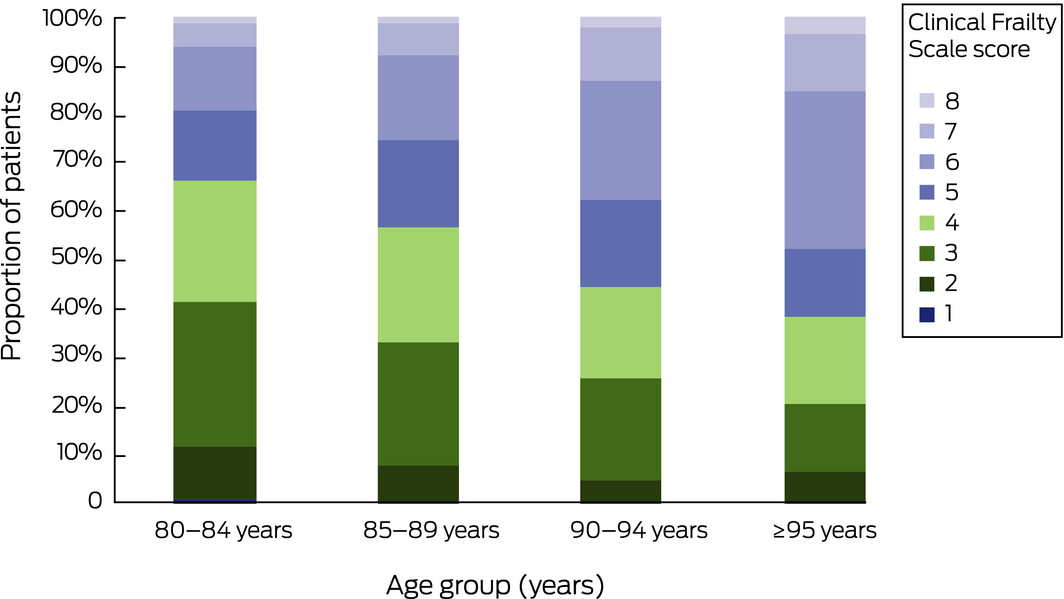 Sean Bagshaw is supported by a Canada Research Chair in Critical Care Nephrology.