Objective: To assess trends in service use and outcome of critically ill older people (aged ≥ 65 years) admitted to an intensive care unit (ICU).

Conclusions: Improved hospital survival without an increase in demand for ICU admission or RAC or an increase in LOS suggests there has been improvement in the care of the older age population.

Older people (those aged 65 years or more) comprise 14% of the Australian population and are expected to represent 26% of the population by 2051.1,2 Several recent reports warn of a rapid growth in demand for intensive care services by older patients, particularly the very old (80 years or older), arising from the combined effect of ageing demographics, expansion of intensive care services, advances in therapeutics and technology, and the evolution of community expectations.2-6

Providing intensive care services for any age group involves outcome, resource and ethical considerations.2-8 Intensive care may not benefit those with irreversible disease or extreme frailty. Thus, clinicians, patients, families and the community face complex management and end-of-life decisions about the appropriate use of life-support therapies.9

Age alone is an unreliable predictor of outcome8-10 and maybe a physiological self-selector.11 Providing invasive or complex interventions to the very old may still be justified in the setting of reversible disease.8-11 Mechanical ventilation therapy is the most common life-support therapy and accounts for 70% of the clinical workload in an intensive care unit (ICU), but also confers a threefold increase in mortality risk.12

Delivering quality intensive care services includes timely identification and assessment of the patient whose condition is deteriorating, access to relevant diagnostic and consultation services, and appropriate therapeutic and rehabilitation interventions, integrated with end-of-life care and palliation services when curative therapy is no longer beneficial. Without robust measures of morbidity and mortality, it is unclear if this is being achieved.

Our primary goal in this investigation was to identify temporal trends in resource use and outcome of critically ill patients aged 65 or more years admitted to an ICU in the public health care system in Victoria.

We undertook a retrospective cohort study of public hospital ICU admissions of people aged 65 years or older in Victoria between 1 July 1999 and 30 June 2011. The Victorian Department of Health provided the dataset and approved analysis and publication.

Population data from the Australian Bureau of Statistics were used to generate relevant age-matched prevalence rates.1 Hospital data were extracted from the Victorian Admitted Episodes Dataset (VAED), an administrative database of all public hospital admissions in Victoria.14 Public hospitals with an accredited adult ICU were eligible for inclusion.15 “Older age” was defined as being aged 65 years or older at the time of hospital admission, and “very old” as 80 years or older.2

We performed secondary analysis on the following subgroups: the very old (≥ 80 years2-5); those receiving mechanical ventilation in the ICU;12 and common diagnosis groups according to the classification system of the International statistical classification of diseases and related health problems, 10th revision, Australian modification (ICD-10-AM).16 We have included results for younger patients (under 65 years) admitted to an ICU, and for older people not admitted to an ICU, where relevant, for comparison.

The primary outcome was risk-adjusted hospital mortality. Risk-adjustment was performed using the COPE model for all ICU admissions, and the hospital outcome prediction equation.20,21 These validated models predict hospital mortality from pre-admission demographic variables and diagnosis on admission.

Secondary outcomes and surrogate measures of morbidity included length of stay (LOS) in ICU and hospital, and hospital discharge destination (home, rehabilitation facility, or residential aged care [RAC]). These data were extracted from the VAED.

The number of ICU beds per year, as a crude measure of resources, was estimated from the ratio of (total) ICU treatment days to the number of calendar days. ICU occupancy was calculated using either the age-matched state population (for prevalence rates), or the relevant hospital or ICU subpopulation (for resource use and proportional rates).

We analysed data with Stata/MP statistical software, version 11.2 (StataCorp). Data were grouped according to financial year and presented as mean and standard deviation (SD), or median and interquartile range (IQR) for skewed data.

Temporal trends in binary variables (eg, death) were assessed by logistic regression, including the year of observation with the COPE-predicted mortality (as a casemix and severity adjustor) and the presence of comorbid conditions as the explanatory variables. Trends in continuous variables (eg, bed numbers and LOS) were assessed by negative binomial regression22 using the same explanatory variables plus hospital LOS as the exposure variable. A P value < 0.05 was considered significant.

There were several important temporal trends in casemix, including increases in admissions after an emergency presentation (from 66.3% to 71.9%; P < 0.001) and in interhospital transfers (from 10.8% to 14.4%; P < 0.001). There was a substantial decline in cardiac medical and cardiac surgical admissions (P < 0.001), and a steady rise in admissions following gastrointestinal surgery, cancer and severe sepsis (P < 0.01; Box 1).

Further data are available in Appendix 1 and Appendix 2

Overall mortality rates among patients aged ≥ 65 years and ≥ 80 years who were admitted to hospital were 2.4% and 4.6%, respectively. Most of these patients (78.8%) were not admitted to an ICU.

There were 17 772 deaths among ICU patients aged ≥ 65 years, giving a mortality rate of 16.4%. Mortality rates were higher among those aged ≥ 80 years (24.1%) and those receiving mechanical ventilation in the ICU (24.6%). Comparative mortality rates for younger adults (aged < 65 years) admitted to hospital, admitted to an ICU, and receiving mechanical ventilation in the ICU were 1.2%, 8.4%, and 18.7%, respectively.12

Trend analysis showed a significant decline in (both crude and risk-adjusted) hospital mortality rates for ICU patients across all age groups, including the ≥ 65 years group (odds ratio for death, 0.97 per year; 95% CI, 0.96–0.97 per year; Box 2). Similar survival trends were observed in the mechanical ventilation subgroup and in the diagnostic groups (Appendix 2).

These favourable survival trends did not appear to be the consequence of a rise in the number of low-acuity admissions, as measured by comorbidity rates and predicted risk of death (P = 0.12; Appendix 3). Nor was there an increase in mortality rate among those not admitted to an ICU (and excluded from the study population); the risk-adjusted mortality rate for this group fell from 2.4% to 1.5% per annum (P < 0.001).

Of the 90 399 older people admitted to an ICU who survived to hospital discharge, most were either discharged home (58.9%) or transferred to a subacute facility for rehabilitation (30.2%); 1573 (1.7%) were discharged to an RAC facility for the first time. We identified no significant temporal trends in discharge destination.

Over 12 years, the growth in ICU resources (total beds) exceeded population growth by 4.7% per annum (an increase from 4.03 to 4.55 ICU beds per 100 000 population),16 but the prevalence of ICU admission for older people revealed an unexpected biphasic pattern.

ICU admission rates for those aged ≥ 65 years increased only during the first 4 years. A substantial fall in admissions of those aged 65–79 years over the last 8 years resulted in a net reversal in the prevalence trend after 2004 (− 1.7% per annum; P = 0.04; Box 3). A similar decline (− 1.6% per annum) was observed in the mechanical ventilation subgroup (Appendix 1).

More than 10 000 patients aged ≥ 65 years receive intensive care treatment in a public hospital in Victoria each year. Most (84%) survive after a short period of acute care (6–17 days), and most return home. We made several observations worthy of comment.

There were divergent age-related trends in ICU admission rates. In line with previous reports,2,3 the prevalence of ICU admission for very old patients has continued to rise. However, this was offset by a decline in the admission rate for those aged 65–79 years after 2004, resulting in a net decline in ICU demand by older patients (Box 3).

There was a substantial improvement in the inhospital survival rate of older ICU patients (Box 2) without any increase in LOS or demand for RAC. We saw the same trends in high-acuity subgroups, and these improvements did not come at the expense of deaths in other hospital wards. We have previously reported improved survival for older patients not admitted to an ICU.21

There are several plausible explanations for improved survival and the unexpected reversal in admission trends. It may simply reflect a global improvement in preventive health care and in treatment, together with a phase shift in disease presentation to an older age group (≥ 80 years). Several recent advances in health care may have contributed to this, such as screening, preventive health care strategies, ambulatory care programs, minimally invasive surgery, interventional cardiology and targeted pharmacotherapy. These may have improved patients’ access to, and the safety of, definitive treatment.

Survival gains did not appear to be secondary to restricting access to an ICU on the basis of age or acuity, or the result of protracted resuscitation in the ICU. Growth in the number of ICU beds (as a measure of resources) exceeded the growth of the population. Changes in demography and casemix were evident (Box 1) and these were accounted for in the risk-adjustment models.19-21 There was no evidence of a temporal decline in the acuity of patients’ conditions or in comorbidity scores, nor was there a rise in the surrogate markers of morbidity (LOS and demand for RAC beds).

Over 80% of all hospital deaths were in those aged ≥ 65 years and most (78%) were not admitted to an ICU before death. This proportion is lower than that reported in the United Kingdom23 and higher than that in the United States,24 presumably reflecting geographic variations in access, triage and models of health care.

Early referral and intervention before ICU admission, multidisciplinary management, and rapid response to patients whose condition is deteriorating25 are fundamental components of intensive care service delivery, and may be partly responsible for the observed improvements. End-of-life planning and access to palliative care are crucial for those with severe illness or irreversible disease.26

There are several important limitations to our analysis. These include the observational design and the absence of detailed clinical data or private sector workload (where casemix and service models differ from those in the public sector). We did not have data on cost versus benefit, or long-term or functional outcomes. Further research is required to investigate these areas. Until more data are available we cannot unequivocally claim that access to, and the outcomes of, care for older age patients has improved.

Despite these caveats, the results appear compelling. Declining demand for intensive care admission together with improved hospital survival, without an increase in surrogate measures of morbidity, are consistent with an improvement in the overall care of the important and potentially vulnerable older population. 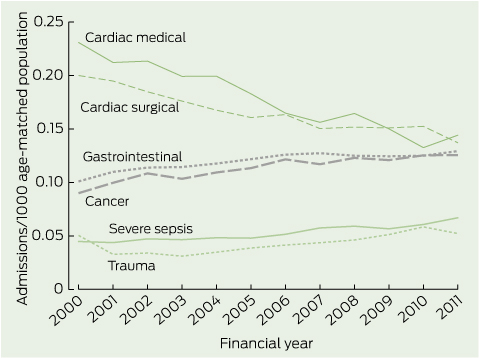 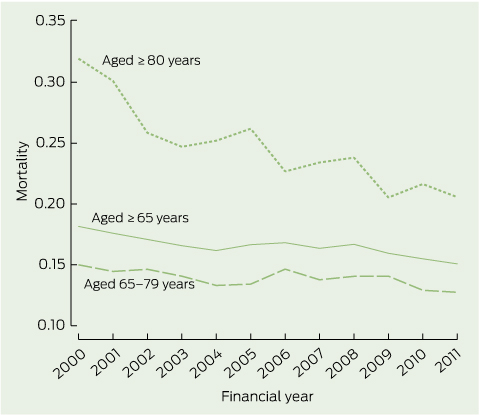 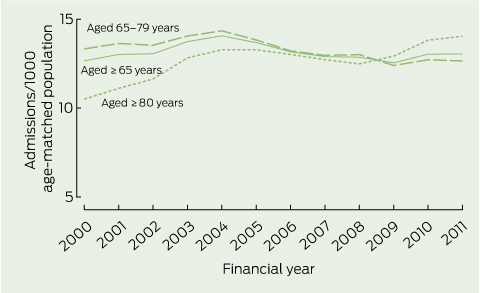 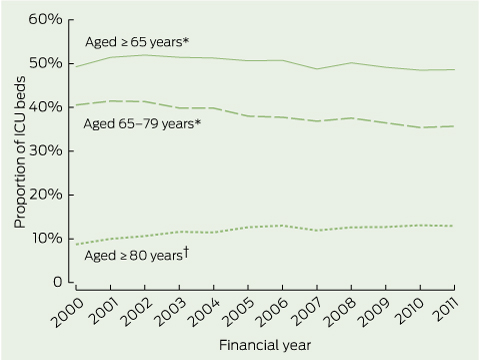