Conclusion: Disparities between Indigenous and non-Indigenous patients with end-stage kidney disease in access to kidney transplantation are not explained by patient- or disease-related factors. Changes in policy and practice are needed to reduce these differences.

The implications Changes in policy and practice are needed to improve the access of Indigenous patients to kidney transplantation.

The incidence and prevalence of end-stage kidney disease are higher among Indigenous than non-Indigenous Australians, particularly among those aged 15–64 years.1,2 Kidney transplantation is the preferred treatment for most patients with end-stage kidney disease, especially in this age group.3,4 Disparities between Indigenous and non-Indigenous Australians with regard to wait-listing and transplantation have been identified,5,6 but the relevant studies are relatively old for an area in which practice has changed substantially. Further, the waiting list information assessed was drawn from the yearly Australia and New Zealand Dialysis and Transplant Registry (ANZDATA) cross-sectional survey of renal units rather than directly from the waiting list and lacked important details, including the date of being placed on the waiting list.5

Since 2006, information about kidney transplantation waiting lists is directly incorporated into the ANZDATA registry, and the National Organ Matching Systems (NOMS) database provides the exact date of being added to the waiting list. Subsequent changes to waiting list status (eg, active, interim, removal), however, are not consistently coded. The availability of renal health care has changed substantially since the most recent published reports5,6 (especially in remote Australia), and the number of deceased donors has increased substantially. We therefore examined the likelihood of Indigenous Australians being placed on the waiting list for transplantation of a kidney from a deceased donor, and the likelihood of transplantation and of death while waiting for transplantation.

All patients registered with ANZDATA who started renal replacement therapy (RRT; dialysis or transplantation) in Australia between 28 June 2006 (NOMS database start date) and 31 December 2016 and were 18–60 years old when they commenced RRT were included. The ANZDATA registry collects data for all patients with end-stage kidney disease treated long term with RRT in Australia. The registry also receives the data from NOMS for all registered patients with end-stage kidney disease on the kidney transplantation waiting list. We analysed a de-identified extract from these data. The patients were classified according to their Indigenous status (Indigenous [Aboriginal and Torres Strait Islander] or non-Indigenous Australians) as reported by the treating hospital and recorded in ANZDATA.

The primary outcomes were:

We examined the association between predictors for wait-listing and the likelihood of placement on the waiting list, including Indigenous status, age at the start of RRT, sex, body mass index (BMI), primary renal disease, comorbid conditions (diabetes, coronary artery disease, cerebrovascular disease, peripheral vascular disease, chronic lung disease), late referral, year of RRT initiation, remoteness, and the state where RRT started. Types 1 and 2 diabetes were combined because of low patient numbers. The likelihood of transplantation and of death for those on the waiting list was compared by Indigenous status.

Frequencies are presented as medians with interquartile ranges (IQRs). Baseline characteristics were compared in Wilcoxon signed rank tests and Pearson χ2 tests. The frequencies of comorbid conditions in the two groups were compared using logistic regression. Time to wait-listing and time from wait-listing to kidney transplantation were assessed in Cox proportional hazards models, adopting a piecewise approach to maintain the proportional hazards assumption.7 The models were adjusted for age, sex, BMI, comorbid conditions, primary renal disease, period of RRT commencement (2006–2009, 2010–2013, 2014–2016), late referral, state where RRT was started, and remoteness. Remoteness was defined by Australian Bureau of Statistics (ABS) remoteness categories, by linking ABS postcode of residence concordance data8 with the postcode recorded in the ANZDATA record for the start of RRT. To account for variation in clinical practice that might affect wait-listing and subsequent transplantation, a shared frailty model9 was used for the state in which RRT started. Shared frailty is a random component designed to account for variability caused by unobserved individual-level factors unaccounted for by the other predictors in the model. Clinically significant interactions between Indigenous status and other variables (age, sex, BMI, smoking, coronary artery disease, chronic lung disease, cerebrovascular disease, peripheral vascular disease, late referral, primary renal disease, remoteness) were examined; they were included in the final multivariate model if statistically significant. P < 0.05 was deemed significant for main effects and interactions. Statistical analyses were conducted in Stata 15.0 (StataCorp).

The study was approved by the human research ethics branch of the Office of Research Ethics, Compliance and Integrity of the University of Adelaide (reference, H2016-096).

Patients waiting to be placed on the waiting list: baseline characteristics

Likelihood of wait-listing after commencement of renal replacement therapy

In the unadjusted model, the cumulative incidence of wait-listing grew more slowly and was less complete for Indigenous patients (Box 2).

For subsequent years of RRT, the adjusted HR (Indigenous v non-Indigenous patients) for being added to the waiting list was 0.90 (95% CI, 0.50–1.6; ie, no significant difference); there were no statistically significant interactions between Indigenous status and age or remoteness (data not shown).

Characteristics of patients on the kidney transplantation waiting list

Likelihood of transplantation among those on the transplant waiting list

Despite the increasing availability of nephrology services in recent years and national criteria for assessing patients to be placed on the kidney transplantation waiting list,10,11 Indigenous Australians undergoing dialysis are still substantially less likely than non-Indigenous Australians to be placed on the waiting list. Multivariate analysis indicated that this disparity was not explained by differences in kidney disease aetiology, BMI, comorbid conditions, late referral for RRT, location of treatment, or remoteness, and has not changed with time. The difference was greater among patients who are older and living in remote areas. For people on the waiting list, the likelihood of receiving a transplant is higher in the first year and is similar for Indigenous and non-Indigenous Australians (43.8% v 31.9% underwent transplantation in the first year of wait-listing), but is significantly lower for Indigenous patients in subsequent years.

We analysed more accurate and detailed information on the waiting list status of patients than earlier studies, including exact dates of listing5 and more recent data (2006–2016). Our findings therefore reflect current clinical practice, with nephrology services well established in more remote areas of central and northern Australia. It is notable, however, that the unexplained differences we found are similar to those reported 20 years ago.6

The difference in likelihood of wait-listing was significant for the first year of RRT and for patients in remote locations, but not during subsequent years of RRT. This is likely to reflect geographic factors (living further from major centres is a barrier to testing and clinical review as part of transplantation assessment)12 and factors associated with remoteness not assessed in our study, such as cultural differences, communication problems, and different understanding of health.5,13,14 In addition, patients in remote areas may spend much of their first year on dialysis dealing with problems of re-location and adjusting to the demands of treatment rather than assessment for transplantation. The reduction of these differences over time suggests that this situation can be improved.

The difference between Indigenous and non-Indigenous patients in the likelihood of being placed on the transplantation waiting list has not changed with time. Placement on the transplant waiting list is the culmination of a series of steps and assessments, including the patient deciding to pursue this path and the treating clinician registering this decision, initial medical assessment and referral for consideration for transplantation, education of the patient about the merits of transplantation, and assessment by the transplantation unit. We do not know how many patients in our study were not referred for wait-listing because they decided not to proceed. However, in a recent analysis of comprehensive interviews of 143 Indigenous patients with end-stage kidney disease from 26 urban, rural, and remote sites across Australia, 90% of participants expressed strong interest in receiving a transplant.15

Strategies for improving access to and use of renal services by Indigenous patients have been implemented in recent decades.16 Much more is known about challenges to providing high quality renal care for Indigenous patients,5,14 but there have been no specific national policy changes with the aim of improving access to transplantation. At the clinical level, outcomes after transplantation, in terms of both graft function and patient survival, are considerably poorer for Indigenous patients,17 particularly for those from remote areas.18 The potential benefits for patients must be balanced against these risks when making decisions about treatment.

The relatively small number of transplants received by Indigenous patients during 2006–2016, the limited data on comorbid conditions, and the difficulty of analysing the complex interactions involved in the effect of remoteness on access to transplantation all complicate interpretation of our findings. There are probably a number of other, unmeasured factors that influence wait-listing and transplantation rates.19 In particular, the ANZDATA registry does not record active infections or the severity of comorbid conditions, which may have led to our underestimating the effect of comorbid conditions on wait-listing and access to transplantation. Further relevant socio-demographic factors — including first language spoken, education level, health literacy, housing status — could also affect access to transplantation. Area-level socio-economic indices for the Indigenous residents of a postcode, rather than all residents, are not readily available. Further, registry data do not account for the re-location of many Indigenous Australians to receive dialysis treatment; that is, their postcode at the start of RRT may not reflect their community of origin. All these factors could delay wait-listing.13,14 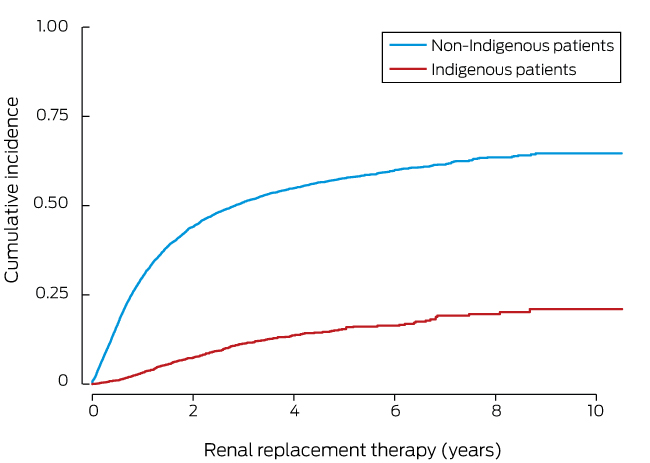 Box 3 – Multivariate Cox model of being placed on the waiting list for kidney transplantation, with frailty shared at state level 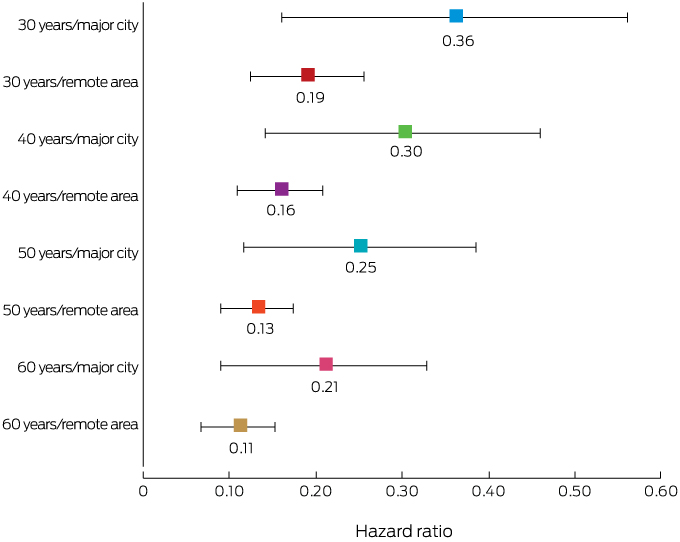 Box 6 – Multivariate Cox model of the likelihood of receiving a deceased donor kidney after being placed on the waiting list for transplantation, with frailty shared at state level

A correction to this article is available at https://www.mja.com.au/journal/2018/209/11/correction