Objective: To document the changing levels of tobacco smoking, respiratory symptoms, doctor-diagnosed asthma, and lung function in Busselton adults aged 46–65 years over the past 50 years.

Design, setting, participants: Repeated cross-sectional population surveys (1966 to 2010–2015) of adults registered to vote in the Busselton shire, Western Australia, including a modified version of the British Medical Research Council questionnaire on respiratory symptoms.

Conclusions: Smoking rates declined as a result of changes in pricing, prohibitions on smoking and the feedback of survey results to Busselton participants. Significant improvements in lung function were measured, and it can be anticipated that the prevalence of other smoking-related diseases will also decline.

The known Smoking rates have been decreasing steadily in Australia, but their relationship with respiratory morbidity has not been mapped over a long period in a single defined population.

The new The prevalence of smoking declined markedly in Busselton between 1966 and 2010–2015, and this was associated with significant improvements in measures of lung function in the population aged 46–64 years. However, the prevalence of specific respiratory symptoms has changed little, and that of doctor-diagnosed asthma has increased.

The implications The deleterious impact of cigarette smoking on lung function in middle-aged individuals is decreasing as smoking rates decline. It is anticipated that other health effects linked to smoking will also diminish.

Busselton is a coastal city in southwestern Western Australia. Eight population prevalence studies of respiratory disease and tobacco smoking in its adult population, predominantly of European origin, have been performed over the past 50 years: in 1966, 1969, 1972, 1975, 1981, 1994–1995, 2005–2007, and 2010–2015.1-3 These studies found that smoking was associated with accelerated age-related decline in lung function, that asthma is associated with reduced lung function present at the beginning of adult life as well as with a greater age-related decline, and that the long term effects of smoking and asthma on lung function are additive.1 Tobacco smoking rates in the population have declined over the period covered by the studies, and treatment regimens for people with airway diseases have improved with the introduction of aerosol steroids and long-acting bronchodilator aerosols.

In this study we analysed data for people aged 46–65 years during the 2010–2015 Busselton survey. This survey was part of a multidisciplinary ageing and health project based on an initial sample of post-Second World War “baby boomers” in this age range at the time of recruitment for the survey.4 Our aim was to document the levels of respiratory symptoms, smoking, medication use, and lung function in Busselton adults aged 46–65 years during the 2010–2015 Busselton survey, and to compare them with rates for adults of the same age group during previous surveys.

Dyspnoea was recorded if the participants responded that they were troubled by shortness of breath when hurrying on level ground or walking up a slight hill. Cough or sputum were recorded if they answered that they had a cough or sputum production on most days for up to 3 months each year. Current smokers were defined as those who had smoked at least one cigarette per day for at least one year; ex-smokers were defined as those who had stopped smoking at least one year before participating in the study.

Body weight in light clothing was measured with calibrated scales; height was measured without shoes with a stadiometer. Forced expiratory volume in one second (FEV1) and forced vital capacity (FVC) were measured (from 1979 according to American Thoracic Society guidelines6-8) with a dry bellows spirometer (McDermott) between 1966 and 1978, a dry wedge spirometer (Vitalograph) in 1981, a pneumotachograph spirometer (Welch Allyn) in 1994–1995, or an EasyOne Spirometer (NDD Medical Technologies) in 2010–2015. FEV1 and FVC were recorded as the highest values obtained from three technically satisfactory forced expiratory flow manoeuvres when the best two were within 10% of each other for both FEV1 and FVC. Measurements from mechanical spirometers were corrected for body temperature and pressure (saturated). Predicted levels of FEV1 and FVC were calculated from published data for previous Busselton surveys.9 COPD was defined by a combination of an FEV1/FVC value below 70% and an FEV1 value less than 80% of the predicted value.

Estimated prevalence was standardised to the age distribution of the 2010–2015 survey sample. Trends in prevalence and means across surveys were estimated in logistic or linear regression models, using generalised estimating equations with repeated measures on individuals. All analyses were conducted in SAS 9.4 (SAS Institute).

All studies were approved by the Human Rights Ethics Committee of the University of Western Australia (references, RA/4/1/0841, RA/4/1/2203).

Between 1966 and 2015, the prevalence of tobacco smoking declined among 46–65 year-old Busselton residents, from 53% to 12% in men and from 26% to 9% in women (Box 1). The prevalence of ever-smoking (ie, of current and ex-smokers) declined from 80% to 57% in men, but increased from 33% to 50% in women. Lung function — as indicated by FEV1 as a percentage of the predicted normal level — improved during the same period (Box 2). Consistent with this finding, the presence of COPD diagnosed according to spirometric criteria declined significantly (Box 3). All these changes were statistically significant (P < 0.001).

The questionnaire responses indicated that reliance on SABAs for both asthma and COPD has declined since the 1994–1995 survey (when medications were first recorded); the use of oral agents (OBDs, OCSs) also declined, while the use of long-acting aerosol bronchodilator medications (LABAs, LAMAs) for doctor-diagnosed asthma and COPD has increased over the same period (Box 7).

Smoking rates in the Busselton community have decreased over the past 50 years, although the decline appears to have slowed after the 1994–1995 survey. The decline in smoking rates has been attributed to efforts by health professionals, to statewide changes in pricing and prohibitions of smoking in certain areas, as well as to feedback of individual and overall survey results to the Busselton study participants and the local community. The reduction in smoking prevalence has not been associated with consistent reductions in rates of respiratory symptoms, but there have been significant improvements in objective indices of lung function.

Other explanations for our findings include the effects of improved and new medical treatments for established asthma and COPD. Bronchodilator regimens have improved and become more accessible over the past 50 years; other advances include treatment with high dose inhaled corticosteroids, metered dose inhalers and simple delivery devices for long-acting β-agonists and anticholinergic agents (since 1994–1995), education of patients about therapy in the community (including pharmacies), and increased compliance with recommended treatments. These factors are likely to have contributed to the changes we observed, together with the reduced smoking rates.

We previously reported that adult-onset asthma in Busselton in 1994–1995 was more prevalent among cigarette smokers.10 As many participants in the 1994–95 study would also have participated in the 2010–2015 survey, the observed improvements in lung function might have been expected because of the decline in smoking rates found by the earlier study.

We reported in a previous article that the prevalence of doctor-diagnosed asthma in the Busselton population increased between 1966 and 200511 (also seen in Box 5). This might be explained by diagnostic transfer resulting from the increased availability of more convenient and effective bronchodilator regimens, making the diagnosis of asthma more attractive to doctors, although a genuine increase in the prevalence of asthma in the population is also possible. Our 2010–2015 study and the findings in this report underline the difficulties of defining common airway diseases, and highlight the importance of objectively assessing chronic lung disease syndromes. The observed trends may reflect a combination of period and cohort effects, but disentangling the two would be difficult, particularly as our analysis was restricted to people aged 46–65 years during each survey.

The Busselton studies have been recognised as landmark population investigations12,13 because they have provided important epidemiological, clinical, and physiological information, as well as physical material for genetic studies. However, it is unlikely that changes in genetic characteristics could account for the changes we observed in this relatively stable and Australian population, predominantly of European background.

It might be anticipated that the prevalence of other smoking-related diseases in the Busselton population also declined over the 50-year period of the surveys. Consistent with the results of our study, it has indeed been reported that heart disease mortality in Busselton has improved.14 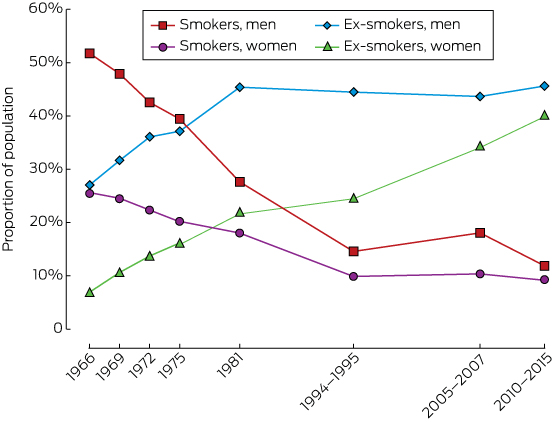 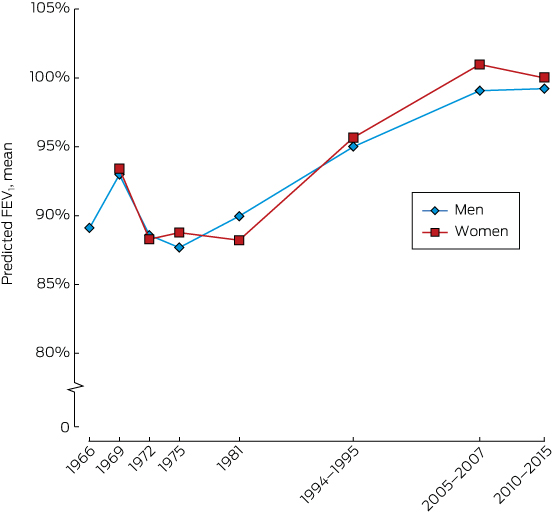 FEV1 = forced expiratory volume in one second. * Spirometric assessment of women was not undertaken in the 1966 survey. 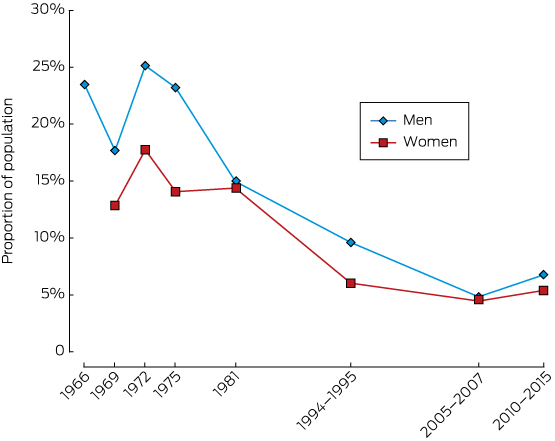 * Spirometric assessment of women was not undertaken in the 1966 survey.

Box 4 – Age-standardised prevalence of cough and phlegm among 46–65-year-old participants in the Busselton Health Study surveys, 1966–2015 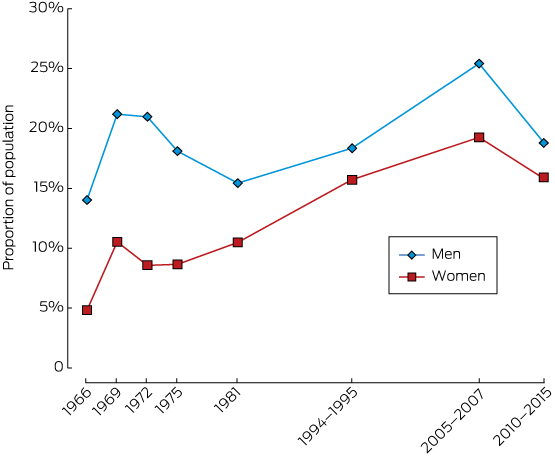 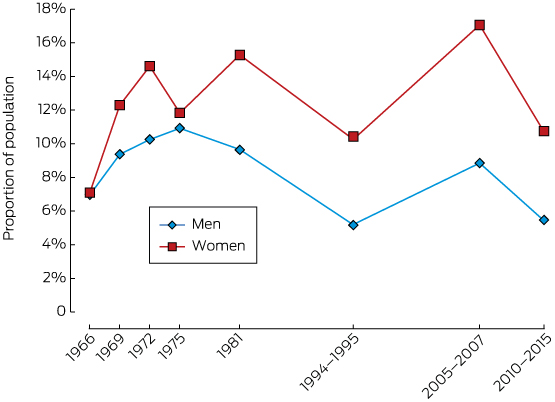 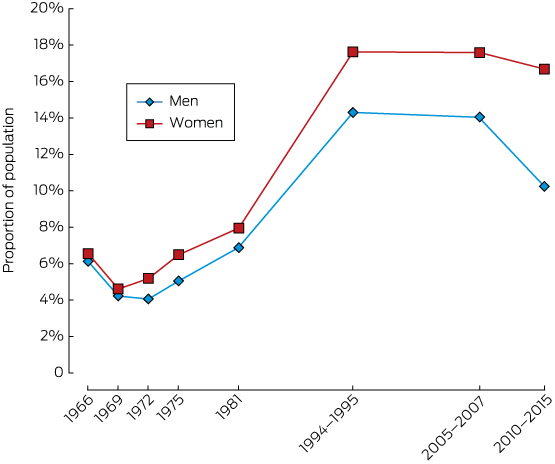 Box 7 – Numbers of 46–65-year-old participants in the Busselton Health Study surveys, 1994–2015, with a history of doctor-diagnosed asthma or bronchial asthma or of chronic obstructive pulmonary disease (COPD), and the respiratory drug therapies employed by these patients

We acknowledge the participation and support of the Busselton community. This investigation was funded by the National Health and Medical Research Council (grant 353532), Healthway WA, the Department of Health (Western Australia), and the Western Australian Office of Science.