Objective: To assess trends in cancer incidence and survival for Indigenous and non-Indigenous Australians in the Northern Territory.

Conclusion: The incidence of several cancers that were formerly less common in NT Indigenous people has increased, without a concomitant reduction in the incidence of higher incidence cancers (several of which are smoking-related). The excess burden of cancer in this population will persist until lifestyle risks are mitigated, particularly by reducing the extraordinarily high prevalence of smoking.

The known The incidence of some cancers (breast, bowel, prostate, melanoma) is lower among Indigenous Australians than among other Australians, while others (lung, other smoking-related cancers, cervix, liver) are more common.

Evidence has accumulated over the past 10 years of large disparities between Indigenous and other Australians in cancer incidence, diagnosis, treatment and outcomes. The incidence of some types of cancer, including breast, prostate and bowel cancers, is lower among Indigenous Australians, but the incidence of several high fatality cancers, including lung, other tobacco-related cancers, and liver cancer, is much higher; further, survival is lower for most types of cancer.1-3 Indigenous people with cancer are more likely to be diagnosed with advanced disease, and less likely to receive optimal treatment.1,4

Evidence about whether these disparities are being reduced is lacking, largely because of historical deficiencies in data on Indigenous Australians in cancer registers and other relevant data sources.2 The Northern Territory is the only Australian state or territory where long term trends in Indigenous health can be studied. High quality health data (including life tables) for Indigenous people are available for the NT; Indigenous identification is high, and the willingness to identify as an Indigenous person has been stable over several decades. Increases in the estimated size of the Indigenous population have been consistent with natural increase and low interstate migration. Registration of cases by the NT Cancer Register (NTCR) is close to complete, with reliable data on the Indigenous status of patients since 1991;5 the accuracy of Indigenous status as recorded by the NT Department of Health Client Master Index (the primary source of Indigenous status data for the NTCR) was estimated to be 94% in 1997 and 98% in 2011.6 It is thus possible to monitor cancer trends for the NT Indigenous population over two decades.

In this study, we examined trends in cancer incidence and survival for the Indigenous and non-Indigenous populations of the NT between 1991 and 2012.

We undertook a retrospective analysis of population-based cancer registration data. The following information on NT residents diagnosed with cancer during 1991–2012 was obtained from the NTCR: date of birth, sex, Indigenous status, location of residence, date of diagnosis, cancer site, date of death, cause of death. Cancer site and cause of death were classified according to the International Classification of Diseases, version 10 (ICD-10). ICD-10 categories C01–C14 were combined as “head and neck cancers”, and C18–C20 as “bowel cancers”. Estimated Resident Population (ERP) statistics for the NT (by year, sex, 5-year age group, and Indigenous status), produced by the Australian Bureau of Statistics, were used for calculating incidence rates.7 Population estimates for the NT non-Indigenous population were calculated by subtracting the Indigenous ERP from the total NT ERP.

Age-adjusted incidence rates for all cancers combined and for specific cancer sites were calculated and analysed according to Indigenous status, sex, and period of diagnosis (1991–1996 or 2007–2012), adjusted for the age distribution of the total Australian population in 2001. Age-adjusted incidence rate ratios (with 95% confidence intervals, CIs) compared cancer incidence rates for the NT Indigenous and NT non-Indigenous populations with that for other Australians (the combined populations of Victoria, Queensland, Western Australia, South Australia and Tasmania; data from the New South Wales and the Australian Capital Territory cancer registries were not available for the full study period) during 2007–2012. The relative changes between 1991–1996 and 2007–2012 in cancer incidence for the two NT populations were also compared with those for other Australians.

The study was approved by the Human Research Ethics Committee of the NT Department of Health and the Menzies School of Health Research (reference, 2014-2286).

The incidence of cancer of unknown primary site decreased between the two periods for both Indigenous and non-Indigenous people in the NT, but remained higher for both NT populations than for other Australians during 2007–2012 (Box 1, Box 2).

Mortality during the 5 years after diagnosis was higher for NT Indigenous than for NT non-Indigenous patients for all cancer sites examined, with the exception of liver cancer (Box 3). The excess hazard ranged from 40% for lung cancer to mortality that was four times as high for thyroid cancer and leukaemia. There was a consistent increase in survival for both Indigenous and non-Indigenous people between 1991–2000 and 2001–2010 for all cancer sites examined, but none of the differences were statistically significant (Box 4). In multivariable regression analysis of all cancer sites combined (adjusted for age, sex, and site), excess mortality in the 5 years after diagnosis was lower for those diagnosed during 2001–2010 than for those diagnosed during 1991–2000 (NT Indigenous patients: excess hazard ratio [EHR], 0.82; 95% CI, 0.72–0.93; NT non-Indigenous patients: EHR, 0.77; 0.71–0.83).

The very high incidence of liver cancer in NT Indigenous people is largely explained by the high prevalence of chronic hepatitis B virus infection.16 Universal childhood vaccination against hepatitis B commenced in the NT in 1990 and should eventually reduce the burden of liver cancer; as most liver cancer is diagnosed in people over 50 years of age, however, the protective effect of childhood vaccination is not yet apparent. There are also concerns that the vaccine is less effective in the NT Indigenous population because the vaccine is not matched to the dominant hepatitis B virus genotype in this population (C4).17

Cancer survival increased between 1991–1996 and 2007–2010 for both Indigenous and non-Indigenous cancer patients in the NT. The NTCR does not include data on stage at diagnosis, so it is not known whether improved survival is a result of earlier diagnosis (ie, more people being diagnosed with localised disease), more effective treatment, or a combination of the two factors. Despite the improvement, survival is still lower for Indigenous than for non-Indigenous patients. A study of NT residents diagnosed with five common cancers during the 1990s found that Indigenous patients were less likely to be diagnosed with localised disease, to commence curative treatment, and to complete curative treatment if they commenced it.18 Chronic disease comorbidity is also more common among Indigenous than other Australians, particularly in the NT, but there have been no studies of the effect of comorbidity on differences in cancer survival. Studies that compared survival of Indigenous and non-Indigenous patients with other serious conditions (acute myocardial infarct, stroke, kidney failure)19-21 have found that the higher prevalence of comorbid chronic diseases is partly responsible for lower survival among Indigenous patients. It is likely that the higher prevalence of chronic diseases in Indigenous people with cancer has a similar effect on their survival.

Why is this so? The lifestyle changes of Indigenous people, from nomadic hunter–gatherers to sedentary consumers, occurred later in the NT than in most of the rest of Australia, as late as the 1950s and 1960s for many people. This was followed by the introduction of the cash-based welfare economy during the 1970s, which increased the quantity and changed the composition of the food they consumed, and also increased their consumption of tobacco and alcohol. The lifestyle of many Indigenous people now in their 50s and 60s, particularly during their younger years, was dramatically different from that of their parents. Further, the lifetime cumulative exposure to cancer risk factors related to lifestyle and behaviour for Indigenous people who are currently middle-aged and older may be very different to that of the previous generation. No detailed data on cancer risk factors for the NT Indigenous population before the mid-1990s are available, so it is not possible to investigate the impact of major changes that occurred from the 1950s to 1970s on their exposure to such factors.

That cancer has a greater impact on Indigenous than on other Australians has been documented in the NT and elsewhere. We found that trends in cancer incidence over the past two decades have not been positive for the NT Indigenous population, except that the incidence of cervical cancer has declined. The improved cancer survival that we detected is a sign of progress, although from a low starting point. While recent developments in NT cancer services — most notably the opening of a specialised radiation and chemotherapy centre in Darwin in 2010 — may further improve cancer treatment and survival, the excess burden of cancer in NT Indigenous Australians (higher incidence and lower survival) will persist until exposure to lifestyle risks is reduced, particularly the extraordinarily high prevalence of smoking.

Box 1 – Incidence of cancer, 1991–1996 and 2007–2012, by cancer site, for Northern Territory Indigenous and non-Indigenous Australians, and for other Australians*

Box 2 – Percentage change in age-adjusted cancer incidence between 1991–1996 and 2007–2012 (with 95% CIs), by cancer site, for Northern Territory Indigenous and non-Indigenous Australians, and for other Australians*

Box 4 – Five-year relative survival (with 95% CIs) for the nine most common cancer sites, by Indigenous status and period of diagnosis 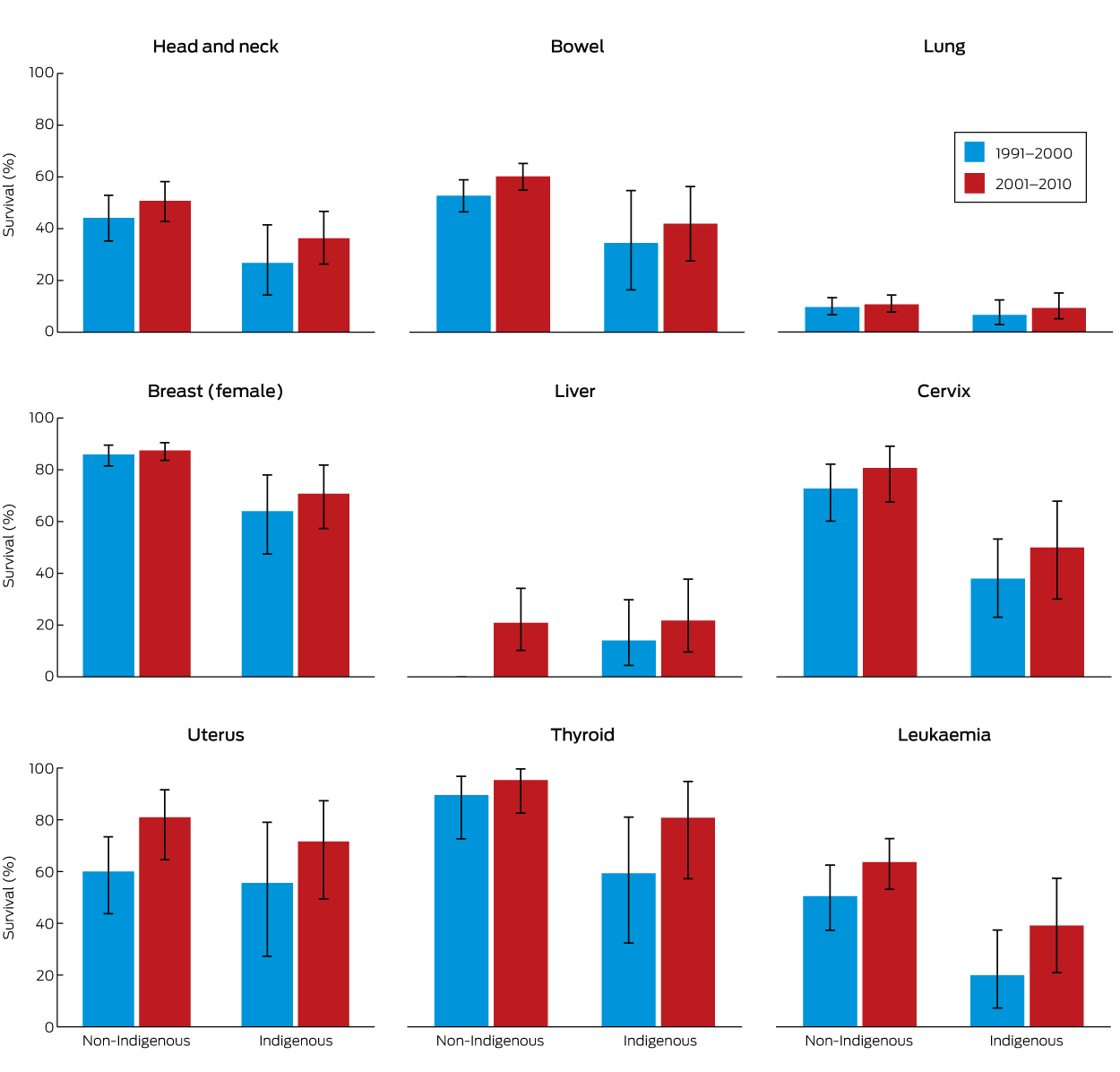 We are all current or recent employees of the Northern Territory Department of Health, which provides cancer prevention, diagnosis and treatment services for the people of the NT, and are currently or have recently been involved in the operation of the NT Cancer Registry.