Objective: To describe the epidemiology, clinical features, management and outcomes of hepatocellular carcinoma (HCC) in the Northern Territory over the past decade.

Design, setting and patients: An NT-wide epidemiology study covering the period 1991–2010 and a clinical cohort study including patients diagnosed during 2000–2011. HCC diagnoses were provided by the NT Cancer Registry and cross-checked against clinical records.

Conclusion: HCC incidence remains high in the Indigenous people of the NT. More resources are needed for HCC surveillance and management programs in this population.

Hepatocellular carcinoma (HCC) is a devastating complication of chronic viral hepatitis. It is the fifth most common incident cancer in the world, and the second most common cause of cancer death.1,2 HCC is among the fastest growing causes of cancer incidence and mortality in Australia,3,4 but its epidemiology in northern Australia has not been comprehensively described, and there are no published analyses from the past decade. Past reports of the incidence of HCC in the Northern Territory have shown it to be higher than the national level and 6–10 times higher among Indigenous Australians than non-Indigenous Australians.5,6 However, previous studies have been based only on registry data and have not described the clinical features and management of HCC in the NT.

The NT has a population of about 230 000 people, of whom 30% are Indigenous. Indigenous Australians have higher rates of chronic hepatitis B virus (HBV) infection than the general Australian population. Recent NT studies have found seroprevalence estimates for hepatitis B surface antigen (HBsAg) in adults of 3%–12%,7-11 compared with 1.0% for Australia as a whole.12 The NT also presents challenges of remoteness and cultural and linguistic barriers, making HCC surveillance and treatment problematic. A universal program of vaccinating infants against HBV has been in place in the NT since 1990, and although this has resulted in a falling prevalence of HBV infection,7 it is unclear if there has been any impact on the incidence of HCC thus far.

The study was approved by the Human Research Ethics Committee of the NT Department of Health and Menzies School of Health Research. We conducted this study in two parts: an NT-wide epidemiology study, and a retrospective cohort study including patients only from the Top End.

Data regarding all cases of HCC diagnosed among NT residents during 1991–2010 were supplied by the NT Cancer Registry, which routinely collects HCC notifications by three methods: histology reports, hospital discharge coding and death certificates. All cases from the NT Cancer Registry were cross-checked against hospital records to confirm the diagnosis. The diagnosis of HCC was defined according to the criteria proposed by the American Association for the Study of Liver Diseases.13 These criteria rely primarily on imaging findings; specifically, tumour size and appearance, and contrast enhancement characteristics.

Population denominator data were derived from the Australian Bureau of Statistics and the NT Government's Health Gains Planning Branch.14 Age-standardised incidence was calculated using the direct method, with 5-year age brackets and the year 2001 Australian standard population.15 The estimated resident population (ERP) for the midpoint of each time period used in the analysis was used as the denominator when calculating rates (eg, the 2000 ERP for the period 1991–2010, the 1993 ERP for 1991–1995).

Detailed clinical data were collected on all patients who were resident in the Top End of the NT and were diagnosed with HCC from 1 January 2000 to 30 June 2011. This part of the study was restricted to the Top End (Darwin urban, Darwin rural, East Arnhem and Katherine administrative regions), as it is the referral base for the Royal Darwin Hospital (RDH), where we had access to medical records and hospital databases. The patients were identified by three overlapping methods: a prospective register kept by RDH liver clinic (2007–2011), hospital discharge coding (International Classification of Diseases, 10th revision, codes C22.0 and C22.9) and the NT Cancer Registry. For each patient, clinical and demographic data were collected from paper medical records and hospital pathology and radiology databases. Mortality data were collected from the NT Government's client master index, which has recorded all deaths of NT residents occurring in the NT since 1995.

In 2006, a public liver clinic began operating at RDH, coordinating the diagnosis and management of HCC patients in the Top End using multidisciplinary input from Flinders Medical Centre in Adelaide. Before this, HCC patients were cared for by general surgery, oncology, general medicine or a private liver clinic. Even after 2006, not all HCC patients were managed through the RDH liver clinic. Hence, for the purposes of analysis of management and outcomes, we divided the study a priori into two periods (2000–2005 and 2006–2011), and within the second period divided patients into those managed through the RDH liver clinic and those managed by other medical practitioners. There is no coordinated program of HCC surveillance in the NT, but patients referred to the RDH liver clinic are offered HCC surveillance comprising a 6-monthly ultrasound scan and test for serum alpha-fetoprotein (AFP) level if they have cirrhosis or if they are high-risk and non-cirrhotic, as per international guidelines.13

Clinical data were collected on paper case-record forms by a trained data collector, and all forms were checked by a liver clinic specialist before data entry. Data were entered into an Access database (Version 12, Microsoft) and were analysed using Stata version 11 (StataCorp). Normally distributed continuous variables were described using mean and standard deviation, and were compared using the Student t test. Non-normally distributed continuous variables were described using median and interquartile range (IQR) and compared using the Mann–Whitney U test. The χ2 or Fisher exact tests were used when comparing categorical data between two groups. Incidence rates were compared by 5-year blocks and Indigenous status using Poisson regression. Kaplan–Meier survival curves were compared using the log-rank test. A two-sided P of less than 0.05 was considered statistically significant. Among patients with chronic HBV infection, individual annual risk of HCC was estimated by dividing the age-specific crude incidence rate by the seroprevalence of HBsAg and multiplying the result by the proportion of HCC attributable to HBV in the whole cohort. Cox proportional hazards models examining the first 12 months of follow-up were used for multivariate models of survival, with all-cause mortality as the outcome.

Just over half the patients (42) were managed with palliative treatment only. Of the remaining 38, 12 patients underwent surgical resection, 10 were treated with oral sorafenib, eight had transarterial chemoembolisation, seven had radiofrequency ablation and three underwent liver transplantation (some patients had more than one type of therapy). All patients who were candidates for curative or local ablation therapies were referred to Flinders Medical Centre in Adelaide.

The median time from diagnosis to death was 139 days overall. The median for Indigenous people (64 days) was lower than that for non-Indigenous people (172 days); the difference, although large, did not reach statistical significance (P = 0.07; Box 3, A). Although more patients were diagnosed at a potentially curable stage during the second half of this study, outcomes did not significantly improve (Box 4); however, within the second period, those managed by the liver clinic had better outcomes than those who were not (17/26 v 6/30 alive at 1 year; P = 0.001; hazard ratio for death, 0.32 [95% CI, 0.15–0.70]; Box 4 and Box 3, B). Among the small group of patients diagnosed at a potentially curable stage (ie, within the Milan criteria), curative treatment was received by 6/12 patients in the RDH liver clinic group and 0/7 patients managed in other settings (P = 0.02).

In a multivariate model controlling for age, sex, Indigenous status and cirrhosis, management through the RDH liver clinic remained the only significant predictor of survival at 1 year (adjusted hazard ratio, 0.35 [95% CI, 0.16–0.81]).

Despite the rising incidence of HCC in Australia as a whole, it remains about six times more common among Indigenous people than non-Indigenous people in the NT. The incidence rate for Indigenous people is similar to the relatively high population-wide rate in China. Hepatitis B infection is the most important aetiological factor among Indigenous people, and there was no decrease in HCC incidence or in the proportion of HCC attributable to HBV over the 20-year period after the introduction of universal infant HBV vaccination in the NT. We also found an independent association between management of HCC through a centralised service, in close liaison with a referral centre and coordinated care, and improved outcomes that were not explained by differences in the period, patient demographics or comorbidities.

Although the RDH is geographically isolated and is not a liver transplant centre, the outcomes we report are similar to those from comparable urban health care systems, although they are inferior to those from highly-selected case series in quaternary referral centres (Appendix 3).

International guidelines recommend 6-monthly surveillance for HCC17,18 using liver ultrasound in selected high-risk people, and this has been shown to improve outcomes,19 and to be cost-effective if the individual risk of HCC exceeds 0.2% per year.13 However, there are no specific recommendations for screening Indigenous Australians with HBV infection. Our study shows that the incidence of HCC is particularly high among Indigenous people once they pass the age of 50 years. The estimated individual annual risk, which rose from 0.34% for 50–59-year-olds to 0.86% for 70–79-year-olds, justifies a call for HCC surveillance in all Indigenous Australians with HBV infection from the age of 50 years.

The improved outcomes in patients managed through the RDH liver clinic may be partly attributable to earlier diagnosis and, thus, less advanced disease. However, even within the small group of patients diagnosed at a potentially curable stage, more patients received curative treatment in the RDH liver clinic group.

That there has as yet been no observable effect of the HBV vaccination program on HCC incidence does not imply that it is ineffective, but rather, that it has only recently been introduced, since most people diagnosed with HCC are over 50 years of age. HCC incidence in China and Alaska, where vaccination programs have been in place for longer, has already started to decrease.20,21 Since there is a large pool of people born before 1990 who have HBV infection, and a significant proportion of HCC is caused by factors other than HBV, HCC will continue to be an important public health problem in the NT for decades.

Ultrasound scanning is not available in most remote NT communities. Since about 60% of Indigenous patients in this cohort came from remote communities, any HCC surveillance program must include strategies to overcome this barrier. Although there are many competing priorities in Indigenous health care in the NT, we believe the high incidence of and mortality from HCC justify the consideration of an appropriately resourced surveillance program including outreach sonography services. HBV case finding and antiviral treatment have been shown to be cost-effective for preventing HCC in high-risk populations,22 so resources to reduce the impact of HCC should be broadly directed at HBV screening and treatment as well as HCC surveillance.

In conclusion, both incidence of and mortality from HCC remain unacceptably high among Indigenous people in the NT, but outcomes can be improved if tumours are diagnosed at an early and treatable stage and care is coordinated through a centralised service. Furthermore, Indigenous people aged over 50 years should be added to the previously designated groups at higher risk of HCC for whom surveillance is recommended. 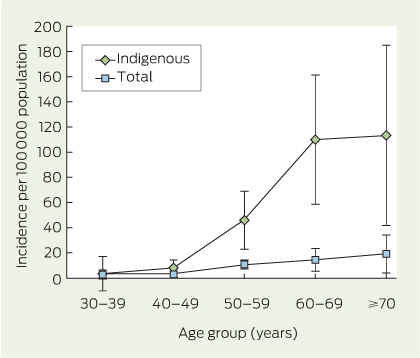 2 Clinical and demographic features of patients in the Top End, Northern Territory, who were diagnosed with hepatocellular carcinoma, 2000–2011

3 Kaplan-Meier survival curves comparing Indigenous and non-Indigenous patients diagnosed with hepatocellular carcinoma, 2000–2011 (A) and patients who did or did not receive centrally coordinated care through the liver clinic during 2006–2011 (B) 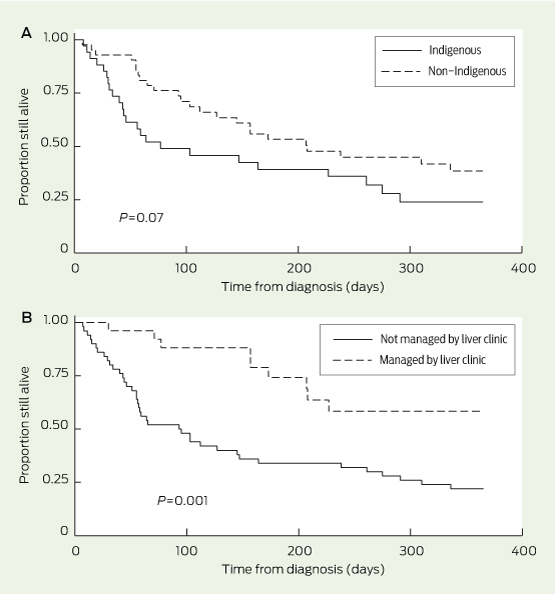 4 Tumour characteristics, demographics, management and outcomes of patients with hepatocellular carcinoma according to period of diagnosis