Objectives: To compare mortality rates for Indigenous and non-Indigenous Australians commencing renal replacement therapy (RRT) over time and by categories of remoteness of place of residence.

Design, setting and participants: An observational cohort study of Australia and New Zealand Dialysis and Transplant Registry (ANZDATA) data on Indigenous and non-Indigenous Australians registered with ANZDATA who commenced RRT from 1 January 1995 to 31 December 2009 and were followed until 31 December 2011.

Conclusions: Although unadjusted analysis suggests that the survival gap between Indigenous and non-Indigenous patients receiving RRT has closed, there remains a significant disparity in survival after adjusting for the variables considered in our study.

In the past 10 years, there have been concerted efforts across Australia to provide dialysis services in more remote areas.6 While providing support for self-care home haemodialysis and peritoneal dialysis in remote Australia has been challenging,7-9 haemodialysis units supported by nurses have been established in small towns and communities. The impact of remoteness on quality of life for Indigenous RRT patients has been well described,10 but its effect on survival has not. We do know that there is a small increase in the risk of death associated with increasing remoteness for non-Indigenous people receiving RRT.11

Emerging evidence in reports on the outcomes of RRT for Indigenous Australians suggests that there has been a significant gap in survival between Indigenous and non-Indigenous Australians in the past,12,13 but that this may have been narrowing.14 Past studies have predated service delivery changes, concentrated on specific regions only12,15 or examined dialysis modalities and transplant survival separately16-18 rather than consider the outcome from the start of treatment for all patients regardless of their initial or subsequent RRT modality.

The Australia and New Zealand Dialysis and Transplant Registry (ANZDATA) collects observational data on all patients receiving chronic RRT in Australia and New Zealand; these data are submitted by treating renal units. This study included all patients aged 15 years or more who commenced RRT between 1 January 1995 and 31 December 2009 and who were maintained on RRT for more than 90 days to create three equal 5-year period-inception cohorts (1995–1999, 2000–2004, 2005–2009, inclusive). Patients were followed until 31 December 2011. We compared Indigenous Australians (those who self-identify as being of Aboriginal or Torres Strait Islander origin) with non-Indigenous Australians (including those of any other ethnicity who commenced RRT in Australia).

Comorbid conditions reported at commencement of RRT included coronary artery disease, peripheral vascular disease, cerebrovascular disease, chronic lung disease and diabetes. Comorbid conditions were recorded in three categories: no, yes or suspected. For this analysis, “no” and “suspected” were combined. Body mass index (BMI) was calculated from height and weight data at commencement of RRT. Late referral was defined as commencing RRT within 3 months of being referred to a nephrologist and data were collected from 1 April 1995.

Postcode data at commencement of RRT were collected from 1 April 1995. An Australian Bureau of Statistics correspondence file19 was used to map postcodes onto the Accessibility and Remoteness Index of Australia (ARIA+), a system based on the physical distance by road from each location point to the nearest town or service centre. This creates a five-category classification of remoteness: major cities, inner regional, outer regional, remote and very remote areas.

The outcome for the study was all-cause mortality. Patient data were censored at 5 years after commencement of RRT, at the date of recovery of renal function or at the date of last known follow-up if they had not died previously.

The probability of survival to 5 years after the commencement of RRT was assessed by calculating Kaplan–Meier failure curves20 with groups compared by the log-rank test.

Using the Cox proportional hazards (PH) model, analysis of the hazard of death was performed using interaction terms between Indigenous status and cohort, and Indigenous status and remoteness category. Variables were added to this model to determine which contributed most to the outcome of the final model. Explanatory variables included cohort, Indigenous status, age, sex, comorbid conditions, BMI categories, late referral and remoteness category. Interactions between variables thought likely based on knowledge of the literature were modelled; the difference in calculated effect on the hazard ratio was less than 20% for all those assessed. For all Cox PH models, the Efron method was used for resolving ties and the PH assumption was assessed by two different graphical means.21 Sensitivity analysis was conducted considering only confirmed comorbid conditions compared with both confirmed and suspected comorbid conditions combined on the outcome of the full Cox PH model.

All analyses were conducted using Stata/MP4 12.1 (StataCorp). Approval for the study was granted by the combined Human Research Ethics Committee of the Northern Territory Department of Health & Menzies School of Health Research (HREC-2011-1634); this process included an assessment by an Aboriginal ethics subcommittee with veto powers.

This difference in mortality rates was attenuated but still clear in the fully adjusted Cox PH model that included all other comorbidity, late referral and remoteness terms (Box 4). There was no evidence of interaction by age or diabetes status or late referral on the relationship between Indigenous status and mortality (data not shown). However, different categories of remoteness interacted with the relationship between Indigenous status and mortality to varying degrees.

In this analysis of all people commencing RRT in Australia from 1995 to 2009, we found that there was a survival difference between Indigenous and non-Indigenous patients in the past that appears to have closed more recently when assessed by methods without adjustment for the substantial differences in the patient populations.

There are clear differences between Indigenous and non-Indigenous patients in their likelihood of being treated with different RRT modalities, particularly kidney transplantation. The difference between Indigenous and non-Indigenous survival is smaller if transplantation is considered separately (data not shown), suggesting that the lower transplant rate for Indigenous patients may be contributing to their higher risk of death after starting RRT, poorer outcomes notwithstanding.16,17 Since fewer Indigenous patients receive transplants, it is reasonable to assume that those few who do are carefully selected and that those Indigenous patients remaining on dialysis will include a number who may well have had a transplant if they were non-Indigenous. This latter group may have a better prognosis than other patients being treated by dialysis. To avoid this susceptibility bias, for our initial analysis, we assessed survival by pooling all patients together regardless of their initial or subsequent treatment modality, as was done in previous studies.22,23 Treatment modalities were not included as a term in any Cox PH models for the same reason. As a result, this study adds to previous work12-18 more recent data that are national in scope and encompasses all RRT modalities.

The increased hazard for death for Indigenous patients receiving RRT, once other baseline variables recorded within ANZDATA are taken into consideration, requires explanation. Of note, similar studies from overseas examining survival differences for people starting RRT have shown better adjusted survival rates for those from minority groups,23,24 or at least equal survival in the case of aboriginal patients from the Prairie Provinces of Canada.22 Many Indigenous Australians receiving RRT come from more remote settings than these overseas minority groups, but this does not explain the persistent increased hazard of death for Indigenous Australians from major capital cities. There may be different patterns of referral for RRT in different countries, although in all those quoted, the costs of RRT are covered by some form of national health insurance. The much lower likelihood of Indigenous Australian patients receiving a kidney transplant compared with non-Indigenous Australians accounts for only some of the difference between the two groups.

There are limitations inherent in this study. Data on characteristics such as social and economic circumstances that may confound Indigenous status are not collected within ANZDATA and are challenging to tease out even with existing Australian Bureau of Statistics Census area data.25 It is possible that the recorded postcode of residence for Indigenous people is inaccurate.3 Comorbidity data captured in ANZDATA are imperfect, in part because they are based on the opinion of the treating physician rather than objectively defined criteria. There is also no information on the severity of comorbid conditions. The analysis examined baseline characteristics only, rather than changes in comorbidity over time. This approach was taken to provide useful information to clinicians discussing prognosis with patients considering RRT.

The improving underlying probability of survival for both Indigenous and non-Indigenous patients starting RRT, once recorded factors are considered, makes the use of these data for predicting survival patterns challenging. Nevertheless, it is sobering to consider that the risk of death after starting RRT still outstrips that for many other diseases, including many cancers (Box 3). As a result, the highest priority must be to prevent as many people as possible (both Indigenous and non-Indigenous) from developing end-stage kidney disease in the first place.

1 Characteristics of the whole population of 27 488 patients at first treatment, by time period and Indigenous status

2 Years of follow-up, number of deaths and mortality rate for the whole cohort of 27 488 patients 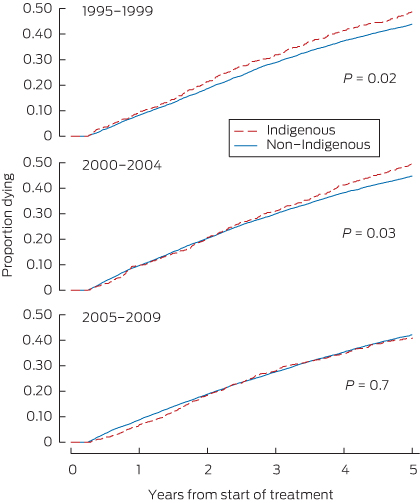 * No censoring for transplantation.

5 Adjusted risk of death* for patients in the three cohorts living in major capital cities, by Indigenous status 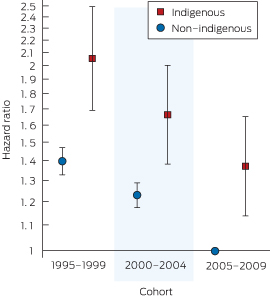 6 Adjusted risk of death* for remoteness areas for the 2005–2009 cohort, by Indigenous status 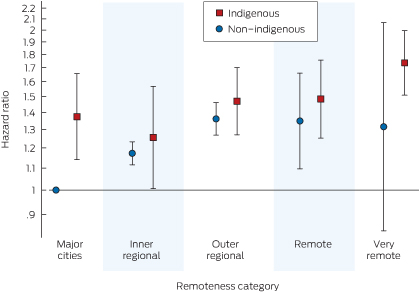 Paul Lawton is supported by a National Health and Medical Research Council (NHMRC) Postgraduate Scholarship (#1038529). Joan Cunningham is supported by NHMRC Senior Research Fellowships (#545200 and #1058244). Peter Baade is supported by an NHMRC Career Development Fellowship (#1005334). The data reported here were supplied by ANZDATA. We gratefully acknowledge the contributions of the Australian and New Zealand nephrology community in providing information for and maintaining the ANZDATA database, and the Health Gains Planning Branch of the Northern Territory Department of Health. The interpretation and reporting of these data are the responsibility of the authors and are not an official policy of or interpretation by ANZDATA, the NT Department of Health or the NHMRC.