Objective: To examine the impact of population density on incidence and outcome of out-of-hospital cardiac arrest (OHCA).

Conclusion: Population density is independently associated with survival after OHCA, and significant variation in the incidence and characteristics of these events are observed across the state.

Out-of-hospital cardiac arrest (OHCA) remains a significant national and global health problem, and is estimated to affect almost 25 000 Australians annually.1 Timely access to emergency medical service (EMS) treatment remains an integral aspect of the chain of survival, and has an important role in determining the provision and performance of EMSs across both urban and regional communities.2 Regional variation in the characteristics and outcomes of OHCA has been described internationally, although few authors have examined the contribution of population density on their reported outcomes.

Previous reports from Australia have found that population factors contribute to the variation in outcomes observed for conditions such as stroke,3 acute myocardial infarction4 and major trauma.5 Similarly, OHCA outcomes have been examined for spatial relationships across areas of Europe,6,7 North America8,9 and Japan;10 however, methods and findings have been inconsistent. In Australia, several authors have shown poorer survival outcomes for OHCA patients in regional areas, although these reports failed to account for the potential effect of population density on survival.11,12

In this study, we examine the contribution of population density to the reported incidence, characteristics and outcome of OHCA in Victoria, Australia.

We retrospectively extracted data from the Victorian Ambulance Cardiac Arrest Registry (VACAR) for all non-EMS witnessed OHCA events between 1 January 2003 and 31 December 2011. Adult patients aged more than 17 years who suffered a cardiac arrest of presumed cardiac aetiology were included in the sample. Ethics approval for this study was granted by the Monash University Human Research Ethics Committee.

As at 30 June 2007, about 5.2 million people inhabited the state of Victoria, Australia, covering a geographical area of 227 000 km2.13 The state comprises 205 inhabited statistical local areas (SLAs) ranging in population density from 0.2 to 7000 people/km2, and a further four uninhabited SLAs.13 The vast majority of its population, about 3.8 million people, reside in the city of Melbourne.

ALS and MICA paramedics are dispatched concurrently to suspected cardiac arrest events in the community. A first responder program for early defibrillation by firefighters and volunteer community teams operates in areas of Melbourne and select rural communities across the state.14 For patients with cardiac arrest, paramedic treatment guidelines follow the recommendations of the Australian Resuscitation Council.15 Resuscitation efforts can be withheld by paramedics in accordance with clinical practice guidelines, and include circumstances where there is strong evidence of prolonged cardiac arrest, or where patient injuries are incompatible with life.

The VACAR has been described previously.16 Electronically recorded patient data are synchronised daily with a central organisational clinical database. Potential cases are identified by VACAR using a highly sensitive search strategy, and individually screened for eligibility. All eligible cases are reviewed and entered into the registry according to the Utstein requirements.17 Hospital follow-up data are obtained from hospital medical records in as many as 99% of all transported cases.

Cardiac arrests are presumed to be of cardiac aetiology unless otherwise stated on the patient care record. The variable “EMS response time” is defined as the time from emergency call to arrival of the first emergency medical response team to the scene. Bystander cardiopulmonary resuscitation (CPR) is defined as any attempt at chest compressions, with or without ventilations. Survival to hospital is defined as a palpable carotid pulse on arrival at hospital as documented on the patient care record.

Spatial data of included cases were defined by region according to 209 SLAs. Geospatial mapping software MapInfo Professional version 11.5 (Pitney Bowes Software) was used to assign population characteristics according to the longitude and latitude coordinates of the case scene location. Scene address was used to generate approximate location coordinates in cases with missing data. Age-stratified population characteristics for OHCA cases were obtained from the Australian Bureau of Statistics for population estimates at 30 June 2007.13

The effect of population density on survival outcome was assessed using a logistic regression model in the overall EMS-treated population and the ventricular fibrillation or pulseless ventricular tachycardia (VF/VT) subgroup. Multivariate models were adjusted for factors with known associations to survival, including: EMS response time, age, sex, public location, the event being witnessed by a bystander, bystander CPR and VF/VT (EMS-treated population only). Independent variables were chosen on the basis of previous reports,16,18 and underwent testing in our models to evaluate potential interaction effects with survival (eg, EMS response time and population density). The very low density group was expressed as the reference category in all models. Effect sizes were presented as risk-adjusted odds ratios (AOR) and 95% CIs. P less than 0.05 was considered statistically significant. The predicted probability of survival was graphically depicted after conditional standardisation. Statistical analyses were undertaken using PASW Statistics 18 (SPSS).

A lower median age was observed in the lower population density groups when compared with higher density groups (P < 0.001, Box 1). EMS response time and the median distance of the nearest EMS station from the scene were significantly higher in the lower density populations. Arrests in public locations and aged care facilities were more frequent in higher density groups. With the exception of the very low density group, VF/VT accounted for about 40.0% of the first monitored rhythms. While the proportion of bystander-witnessed events was similar between the very high and very low density groups (62.2% v 61.6%, P = 0.962), the proportion of patients receiving bystander CPR varied significantly (45.2% v 59.0%, P < 0.001).

This study identifies that population density is independently associated with survival outcome from OHCA, with trends observed in its incidence and characteristics. The data collected for this study are representative of 99.5% of the inhabited regions of Victoria, and offer a key strength over previous reports, which may have been limited to data collected from select municipalities.6-8

Variation in the incidence of OHCA has been described previously,1,8 with the global variation of EMS-attended OHCA ranging between 24.0 and 186.0 per 100 000 person-years.1 In the current study, the highest incidence of OHCA was found in the very high density region, where the presence of modifiable cardiovascular risk factors is reportedly lower than the Australian average.19 This paradox can be partly explained by a shift in Melbourne's diurnal population where people commuting to areas of work create a sixfold increase in the normal resident population of inner Melbourne.20 This may also explain the increased public nature of arrests in the very high density group. Despite significantly better outcomes in higher density areas, lower density groups were associated with favourable baseline characteristics such as younger age, greater bystander CPR and increased VF/VT (low density group). While these findings are likely to be interdependent, they may also indicate selectivity in the EMS treated population, where poorer response time performance is often mitigated by the presence of younger patients and by bystander-initiated resuscitation.21

While previous authors have coupled poorer survival in regional areas to increased EMS response times, this study shows that the association between population density and survival is independent of known survival confounders. Authors from Japan have described similar findings,10 and suggest that combinations of prehospital and hospital-based factors are contributing to regional disparities in OHCA outcome. For example, our study showed a disparity in the availability of intensive care paramedics in less densely populated areas of Victoria. While the impact of paramedic skill level on OHCA outcome is yet to be well understood, an Australian report conducted in a similar EMS system showed that access to an intensive care paramedic was associated with a significant increase in survival to hospital discharge after OHCA.22 Reduced paramedic exposure to resuscitation practice in lower density areas is also likely to be a contributing factor, although evidence in this area remains scarce and requires further exploration. In addition, the frequency of preventable bystander delays after OHCA has undergone a recent evaluation, which shows that arrests occurring in rural regions were independently associated with emergency call delays and death after OHCA.21

Similarly, hospital-based factors have been associated with regional variation in OHCA outcomes. A recent report from Victoria established that the availability of a 24-hour cardiac interventional facility could partly explain the variation in regional survival from OHCA.23 The greatest survival benefit was observed in patients transported to two centralised trauma hospitals situated in the very high density population of Melbourne, and may partly explain the increased survival observed in this region. While the importance of regionalised trauma centres has been well established in Victoria, the implementation of centralised care pathways for OHCA is less certain.24 In fact, few randomised controlled trials have been conducted to examine the benefit of system pathways that improve access to sophisticated emergency teams and optimal post-arrest practices.2,24 These clinical trials are urgently needed, and will help inform the contribution of regionalised post-arrest care on OHCA outcomes in Australia.

We acknowledge several limitations in this study. First, its retrospective design carries inherent limitations. Higher levels of missing survival data were present in the lower density groups and may have introduced some bias. Second, our population density categories were arbitrarily chosen and may not be generalisable in cross-nation comparisons. Finally, other confounding factors such as transport time to hospital and paramedic skill level were considered, but not included in our multivariate analyses. Cases not involving intensive care paramedics were presumed to be overrepresented by futile attempts at resuscitation, and excluding them reduces the possibility of confounding in our models. Similarly, while transport time offers an appropriate surrogate of time to definitive care, its inclusion in multivariate models provides little prognostic information,25 and excludes patients whose resuscitation efforts are ceased at scene (greater in lower density areas).

Nevertheless, this study provides key insight into the variation in OHCA outcomes observed across a large Australian community, and indicates that population density is independently associated with survival outcome. However, the causative factors associated with the observed variation in outcomes remain speculative and require further investigation. Delineating prehospital and inhospital factors associated with improved outcomes in densely populated areas can be used to inform practice recommendations and service provision in sparse populations.

2 Crude and adjusted odds ratios (and 95% CI) for effect of population density on risk-adjusted odds of survival (95% CI) in population treated by the emergency medical service (EMS) and in ventricular fibrillation or pulseless ventricular tachycardia (VF/VT) subgroup, after adult out-of-hospital cardiac arrest of presumed cardiac aetiology in Victoria, 2003–2011* 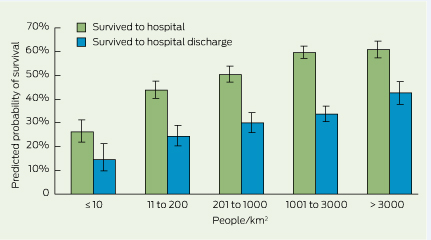 * Conditional probability of survival calculated for a 60-year-old man who suffers a bystander-witnessed ventricular fibrillation or pulseless ventricular tachycardia cardiac arrest in a public place and receives cardiopulmonary resuscitation from a bystander. Emergency medical service response time is 9 minutes.