Cardiovascular disease is the leading cause of death in Australia.1 Most of these deaths are unexpected and occur outside the hospital, and survival rates have been poor (< 5%).2,3 When emergency medical services arrive early, most cardiac arrest patients are found in ventricular fibrillation (VF).4

Defibrillation is the definitive treatment for VF, but is rarely successful if the duration of VF extends beyond 10 minutes.5,6 An audit of ambulance case records in Melbourne in 1995 showed that the mean ambulance response time (from processing of 000 call to ambulance arrival at scene) to cardiac arrest patients was 9.4 minutes (Box 1).3 When additional delays were factored into the response, such as delays in dialling 000, more than half the patients were defibrillated more than 10 minutes after the onset of VF.

To reduce emergency service response times and time to defibrillation for cardiac arrest patients, the Emergency Medical Response (EMR) pilot program was established in Melbourne in 1998. The simultaneous dispatch of fire fighters (trained in cardiopulmonary resuscitation [CPR] and equipped with automatic external defibrillators) and ambulance paramedics to suspected cases of cardiac arrest significantly reduced response times (Box 1).7 Based on results from the pilot program, in February 2000 the Victorian Government expanded the program across all of metropolitan Melbourne serviced by the Fire Brigade. This article describes the first year of the expanded program.

Ethics approval for data collection and analysis was obtained from the Monash University Standing Committee on Ethics in Research Involving Humans.

Implementation of the expanded program

The Metropolitan Fire and Emergency Services Board (MFESB) is an urban fire service staffed by professional fire fighters. All 47 fire stations (with 58 fire trucks staffed by personnel trained for the EMR program) were involved in the expanded program, and 1337 (91%) fire fighters were trained to be first-responders, with training continuing throughout 2001. The MFESB services an area of about 1096 km2 with a population of about 2 million people (Box 2).

Fire fighters were trained and equipped to respond to ambulance events and provide basic life support, including the use of a shock advisory defibrillator (which recommends when a shock is required), until the ambulance service arrived (Box 3). Training comprised an eight-day course, which provided three-year certification. In addition, ambulance paramedics provided continuing education in critical skill areas through regular (programmed) visits to fire stations.

Between 7: 00 and 22:30, the Metropolitan Ambulance Service has 68 ambulances responding each day, each staffed by two paramedics trained to perform CPR and defibrillation for VF or pulseless ventricular tachycardia. At other times there are 49 ambulances responding. Additionally, there are 17 mobile intensive care ambulances, each staffed by two paramedics trained to perform defibrillation and advanced life support, including intravenous administration of vasoactive and antiarrhythmic drugs and tracheal intubation. Ambulance treatment protocols for cardiac arrest patients are based on published national recommendations and involve the administration of CPR and advanced life support drugs, plus defibrillation when the rhythm is VF or ventricular tachycardia.8 Ambulance paramedics do not initiate resuscitation when patients are in asystole or pulseless electrical activity and there is clear evidence of prolonged cardiac arrest, or if a local medical officer instructs them not to resuscitate.

Both ambulances and fire trucks are dispatched from a central communications centre, which responds to an emergency phone number of 000 for metropolitan Melbourne via a computerised protocol-based dispatch system. The highest medical emergencies are those where the subject is suspected to be unconscious or non-breathing. When the dispatcher identifies a high priority event, the closest available ambulance, mobile intensive care ambulances and fire engine are dispatched simultaneously.

Results of the first 12 months of the EMR program are summarised in Box 4 and Box 5.

In the controlled EMR study,7 mean time to defibrillation was reduced from 10.1 to 8.6 minutes, and this was maintained in the expanded EMR program (8.75 minutes). Although this is an improvement, defibrillation should ideally be achieved within six minutes of receipt of call, because after this the probability of survival decreases sharply.9

To significantly increase survival rates a community approach is needed. Since 1991, the American Heart Association has promoted the concept of the "chain of survival" to explain the systematic changes necessary for successful resuscitation of victims of cardiac arrest.10 The elements of this are early access to emergency care, early cardiopulmonary resuscitation, early defibrillation, and early advanced cardiac life support.

Early access: Witnesses to a cardiac arrest are often agitated and do not immediately call for the emergency medical service. One study of cardiac arrests in western Melbourne found that 20% of bystanders called a local medical officer or relative first.3 Consideration of ways to increase public awareness of the need to call 000 immediately for cardiac arrest patients would be valuable.

Early cardiopulmonary resuscitation: Forty-seven per cent of witnessed arrests received CPR from a bystander during this program. However, the quality of CPR and how quickly it was initiated are unknown and will require further research. Earlier effective CPR might improve the low survival rate in Melbourne.5,11 The Victorian Government is currently offering free CPR lessons to the public through the "Key to Survival" program. In time we will be able to see if this initiative increases bystander CPR participation rates.

Early defibrillation: In addition to the MFESB, other professional groups may warrant consideration as first responders to cardiac arrests.12 The concept of public-access defibrillation, where defibrillators are placed in public buildings/sites, also needs to be explored through studies which map the location of arrest from VF.13

Early advanced cardiac life support: Even with the introduction of rapid defibrillation, a significant group of patients will rely on the ambulance to provide advanced cardiac life support.14 The Metropolitan Ambulance Service has implemented a program in which all ambulance paramedics will eventually be trained in the use of the laryngeal mask airway device and the administration of intravenous adrenalin. This initiative should improve the efficiency of defibrillation in borderline cases.

An important future analysis will involve the cost-effectiveness of the EMR program. Currently, the number of VF patients is too small to assess this. However, most of the cost was in the start-up of the program, the training and in a wage increase for fire fighters, which was implemented as part of an industrial agreement.

Acceptance of a medical first-responder role by fire fighters

As the number of VF patients is small, maintaining confidence among fire fighters is one of the challenges. In addition, the EMR program has expanded the role and activities required of them. However, results from a study using focus groups and a questionnaire suggest that the fire fighters have adapted well to their new role and view their skills as an important addition to their current expertise.15 Fire fighter motivation and skills have been maintained through regular in-station training sessions and the dissemination of information through newsletters and an in-house television channel.

The current program has been successful in maintaining reduced response times to cardiac arrest patients in Melbourne. Further research is needed to better establish the effect of the program on long-term survival and quality of life. Investigations of other strategies to deploy automatic external defibrillators are also an important priority.

2: Map of the Melbourne metropolitan area included in the expanded Emergency Medical Response program, and the number of high priority events, by postcode per year 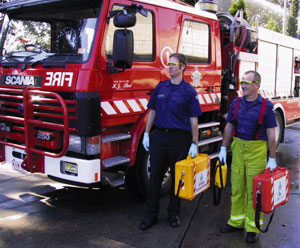 4: Results of the first 12 months of the Emergency Medical Response (EMR) program

5: Outcomes for the high priority events in the first 12 months of the Emergency Medical Response (EMR) program