Objective: To provide the first multinational survey of temporal trends in testosterone prescribing, given that anecdotal evidence indicates that it is increasing in some countries, including Australia.

Since the first report of clinical use of testosterone in 1937,1 2 years after its Nobel Prize-winning identification as the male testicular steroid,2,3 the sole unequivocal therapeutic indication for testosterone is in replacement therapy for pathological androgen deficiency (AD). This includes disorders of the testis, where damaged Leydig cells cannot produce sufficient testosterone, and of the hypothalamus and/or pituitary, where impaired pituitary luteinising hormone (LH) secretion reduces testosterone production by Leydig cells. Pharmacological androgen therapy — the use of testosterone (or its synthetic androgen analogues) beyond replacement therapy — exploits androgenic effects on muscle, bone, liver or brain in men.4 It can also be used to treat various functional AD states where an intact reproductive system responds adaptively to acute or chronic illness (eg, ageing, obesity, diabetes, cardiovascular disease, chronic infections or organ failure syndromes) by reducing testosterone secretion. These uses require high-quality clinical evidence of efficacy, safety and cost-effectiveness from trials featuring randomisation and placebo controls; however, few such trials are available.5

Using the World Health Organization definition of standardised dosing (WHO Collaborating Centre for Drug Statistics Methodology, http://www.whocc.no; described in detail elsewhere6,7) the defined monthly dosage of testosterone was calculated for each product category, country and year. Testosterone products were grouped into four categories as injectable, implantable, oral or transdermal and, using a standard dosage regimen, sales of units were converted into monthly dose equivalents. For each country and region, total testosterone units were calculated for each product category per year. These total use estimates were adjusted to a population basis using annual national population estimates obtained from the US Census Bureau based on annual estimates for national population. This method uses commercial (wholesale) sales of testosterone products as a surrogate for testosterone prescribing and assumes (i) a constant proportion of adult males in each country’s population over time and between countries, and (ii) a steady state existing between purchase, prescribing and clinical use of testosterone products according to their approved regimens.

Over 11 years, total testosterone sales increased 12-fold globally, rising from $150 million in 2000 to $1.8 billion in 2011. For all regions and 37 of 41 countries, there was a progressive and increasingly steep increase in per capita use over that period (Box 1). This rise was markedly steeper from the middle of the decade, consistently in almost all countries (Box 2). In parallel, the proportion of testosterone sales as transdermal products also increased overall as well as in each region, especially in the second half of the decade for most countries (Box 1).

This study shows a large and progressive increase in testosterone prescribing across a wide range of countries over more than a decade. This is not due to any new indications for testosterone, and the rising trend accelerated over the last half decade of the survey period. The most dramatic increases in per capita testosterone prescribing were observed in Canada, which displayed an almost fourfold higher rate than the next country, its southern neighbour the US (however, a similar pattern did not occur between the US and its southern neighbour Mexico). This increase is most probably due to internet pharmacies physically based in Canada, which appear not to be subject to national prohibitions of import and export controls of androgens as restricted drugs and are beyond the US Food and Drug Administration’s regulatory reach. In contrast, other national data are likely to reflect use only within a country. These findings closely resemble, and widen, the spectrum of prescription drug misuse, which has been described as a modern epidemic12 involving the misuse of psychoactive drugs such as opioids, sedatives and stimulants, as well as non-psychoactive drugs such as antibiotics.13,14 Notably, testosterone has long been known to have mood-elevating effects,15 reflected in its modest efficacy as an adjuvant antidepressant,16,17 and hypomania as an overdosage side effect.18

Testosterone prescribing was already increasing before 2000 when this survey commenced.6,8 The reasons for this coordinated global increase in testosterone prescribing are speculative. The dramatic differences between even neighbouring countries is an indication that differences in local or regional marketing are responsible as shown previously for Australian states.6,8 The impact of direct-to-consumer advertising in the US, materially unchanged during the period of survey, would be largely confined to North America. More likely, a major contributor, especially in the second half of the decade, appears to be the permissive US19 and European-based20 guidelines for testosterone prescribing, first published in 2005–2006 and republished virtually unchanged 4 years later.21,22 The European-based guidelines appeared in seven different peer-reviewed journals, and both guidelines have been frequently cited (> 1300 times; Thomson Reuters Web of Knowledge, 20 June 2013, http://wok.mimas.ac.uk/news/2013/20130620.html). These guidelines are widely understood to define and endorse testosterone prescription for age-related functional AD (also known as andropause or late-onset hypogonadism).23 In eliminating the distinction between pathological and functional AD, these guidelines promote unproven off-label testosterone prescribing, particularly for older men, bypassing the need for high-quality evidence from randomised placebo-controlled clinical trials.5

The rising proportion of transdermal products may reflect that the increased testosterone prescribing was primarily for older men, although the age and indications for treatment were not available for this analysis. Daily-use testosterone products are a convenient surrogate metric for testosterone prescribing for older men, as short-acting products allow for rapid cessation with a new diagnosis of prostate cancer. In contrast, younger men, facing a lifetime of treatment, prefer long-acting injections, which facilitate the continuity and convenience of long-term treatment.24

The known prevalence of pathological AD (about 0.5% of men24) equates to about 15 defined monthly doses per year per 1000 population. Population-linkage registry data from the UK25 and Denmark26 indicate severe underdiagnosis of Klinefelter syndrome (KS), the most frequent cause of pathological AD. Nevertheless, it is highly unlikely that recent steep increases in testosterone prescribing can be attributed to rectifying underdiagnosis of KS. Not only does total testosterone prescribing in some countries exceed the maximum amount that could be attributed to pathological AD, there is no evidence that the diagnosis of KS has increased in recent years.6,27 In contrast, the estimated population prevalence of age-related functional AD among older men is up to 40%,28 more usually 10%–25%,29-31 with even the lowest estimates of 2%–3%32 representing major (five- to 100-fold) increases in potential market size over pathological AD.

Limitations of this study include that no information on patient age or the indications for prescribing was available. However, it is most likely that the increased prescribing was for older men with functional AD. The study also did not include testosterone sold by compounding pharmacies. Androgens (including testosterone) obtained illicitly via the internet or other non-medical sources are at least partly included, to the extent that virtually all testosterone originates from commercial production facilities that supply wholesalers. 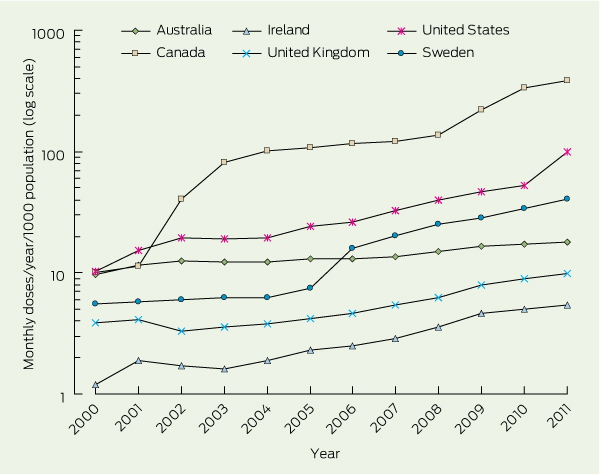 I thank Lam Ly for his help with data management and Nicole Sweetman of IMS Health for providing the data.