Pharmacoepidemiology of testosterone prescribing in Australia, 1992–2010

Objective: To describe patterns of testosterone prescribing in Australia over the past two decades by state or territory and by product type.

Conclusions: The progressive increase in PBS-subsidised testosterone prescribing without changes in proven medical indications or improvements in diagnosis of pathologically based androgen deficiency are likely to be due to promotion-driven non-compliance with PBS prescribing criteria, indicating that more effective implementation of the criteria is needed.

Since the Nobel Prize-winning characterisation of testosterone as the mammalian androgen responsible for male reproductive function and virilisation in 1935,1-3 and its introduction into clinical practice 2 years later,4 the only unequivocal indication for prescribing testosterone has been physiological androgen replacement therapy for men with androgen deficiency due to pathological disorders of the hypothalamic–pituitary–testicular axis.5

PBS data (including the Repatriation Pharmaceutical Benefits Scheme) on all testosterone products were obtained from the Medicare Australia website. Available data included numbers of units prescribed and expenditure for each state and territory, and for each testosterone product, by month from January 1992 to December 2010. No health or anthropometric information on the people who filled the prescriptions was available.

To compare dosing regimens of different testosterone products, the prescription unit of each product was converted into defined monthly doses (ie, the number of months covered by one prescription unit) (Box 1), based on the average dose registered for use in adults (obtained from the approved product information) and consistent with the conventional definition of standardised dosing (WHO Collaborating Centre for Drug Statistics Methodology, http://www.whocc.no). Expenditure data were adjusted for inflation, according to the consumer price index, by using the Reserve Bank of Australia inflation calculator (http://www.rba.gov.au/calculator).

Testosterone prescribing data were also obtained from IMS — a company that provides national sales data by year by pooling data from the Australian Pharmaceutical Index and the Australian Hospital Index (http://www.imshealth.com/portal/site/ims). For each testosterone product, it provided the number of units prescribed and expenditure for each year (1993 to 2010, inclusive), but not monthly or state- and territory-based data. IMS data include PBS-subsidised prescribing, private (non-PBS) prescribing and hospital-based prescribing.

When viewed as total testosterone prescribed in monthly defined dose units, testosterone prescribing increased over the two decades with consistent parallelism between the two data sources (Box 2). For both data sources, there was a strikingly steeper rise in cost relative to dose from 2005 onwards. According to the PBS data, there was a greater increase in expenditure (4.5-fold [adjusted for inflation]) than in total prescribing (2.5-fold).

When testosterone prescribing was analysed by state and territory, there was a 2.1-fold difference between the states and territories with the highest and lowest rates of prescribing in 1992 (New South Wales v Western Australia and Tasmania) and a 2.2-fold difference in 2010 (Queensland v Tasmania) (Box 3; PBS data only). Over the two decades of observation, testosterone prescribing increased in all states and territories, with the increase ranging from 1.5-fold (New South Wales) to 4.3-fold (Western Australia).

Over the past two decades, testosterone prescribing in Australia has progressively increased, predominantly via community pharmacies and even after adjustment for inflation and population growth. There was a greater increase in expenditure than in total prescribing because of substitution of more expensive newer testosterone products for older testosterone products; this is striking for an old, off-patent product in which the active ingredient represents only about 1% of the marketed product cost. Although the Pharmaceutical Benefits Advisory Committee aims to restrict opportunistic price increases for new products (via reformulation of old drugs) by benchmarking against older products, the range of existing marketed testosterone products provides alternatives that can be used to avoid the lowest cost comparator. However, accepting some price inflation may be an opportunity cost that should be traded off against having newer products available. By contrast, neither oral nor injectable testosterone undecanoate have ever been marketed in the United States, thereby restricting prescribing options.

Given the prevailing eligibility criteria, the substantial increases in PBS-subsidised testosterone prescribing must reflect either improved diagnosis of androgen deficiency, consistent with the eligibility criteria, or increasing evasion of the criteria. It is well established that, even in countries with effective national health systems that provide universal access to health care, most men with Klinefelter syndrome (the most common pathological cause of androgen deficiency) are never diagnosed during their lifetime.12,13 Hence improved diagnosis of Klinefelter syndrome might increase testosterone prescribing. However, there is no suggestion or evidence of such improvement,6,13 and the increase in testosterone prescribing could not be explained solely by increased diagnosis of Klinefelter syndrome. A more plausible explanation is the promotion of testosterone prescribing driven opportunistically by new product launches for speculative, non-approved indications such as “andropause” and male sexual dysfunction. It remains paradoxical that concurrent with underdiagnosis and undertreatment of genuine androgen deficiency, there is growing overuse of testosterone in older men as an anti-ageing tonic and non-specific treatment for sexual dysfunction, for which sound evidence is lacking. Although it cannot be excluded that, in the future, pharmacological testosterone treatment might prove effective and safe in such non-androgen deficiency conditions,14 in the interim, it is highly marketable with an easily confected popularity which creates a demand that bypasses sound clinical practice.

1 Testosterone products on the PBS

2 National expenditure and defined monthly doses for testosterone products, according to PBS and IMS data, 1992–2010 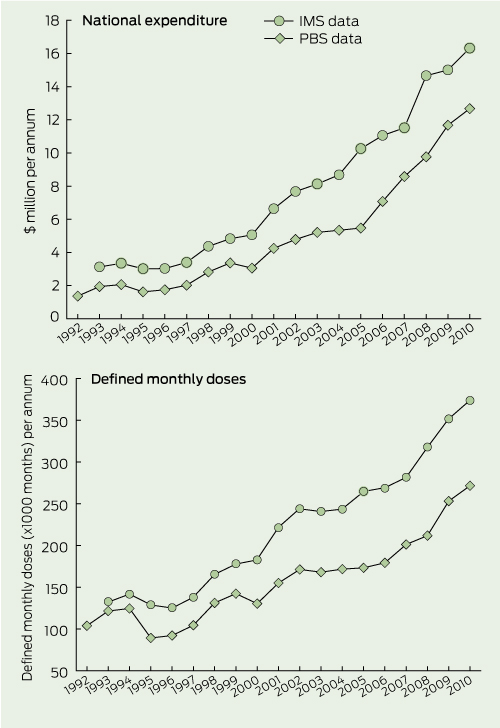 3 Defined monthly doses of testosterone products by state and territory, according to PBS data, 1992–2010 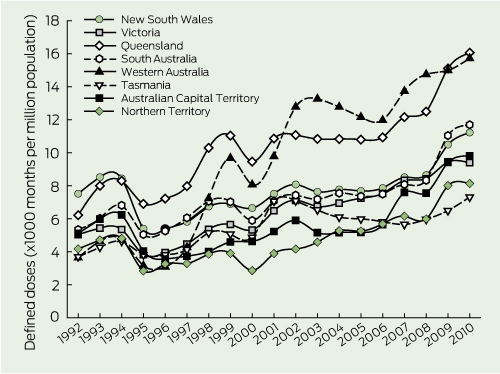 4 National expenditure on testosterone products by product type, according to PBS and IMS data, 1992–2010* 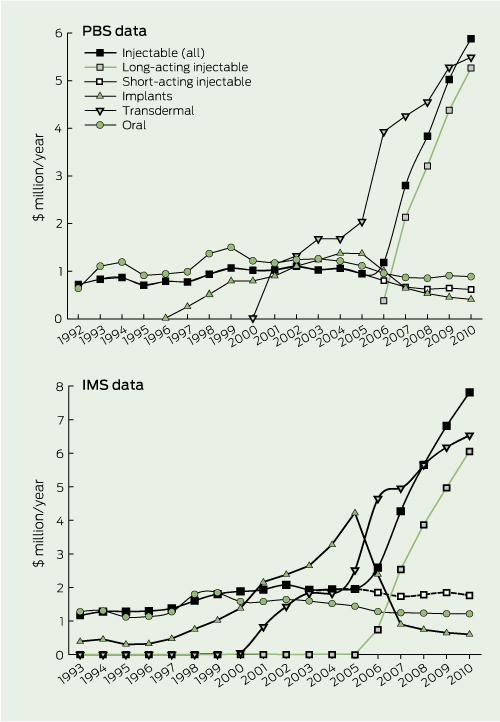 I am grateful to Chris Proctor and Nicole Sweetman (IMS) for providing access to IMS data and to Lam Ly for assisting with the data analysis.

I have received investigator-initiated research funding for work not directly related to this study from all companies that have marketed testosterone products in Australia.