Close the Gap: ask the experts

Planning the next steps in an Indigenous-led journey 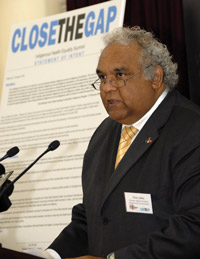 When Prime Minister Kevin Rudd made his much anticipated formal Apology to Indigenous Australians in early 2008, he described it as a

first step [towards] a future where we harness the determination of all Australians, Indigenous and non-Indigenous, to close the gap that lies between us in life expectancy, educational achievement and economic opportunity.

Every journey requires preparation before the first step can be taken, and this one was no exception. In his 2005 Social Justice Report, the Aboriginal and Torres Strait Islander Social Justice Commissioner, Tom Calma, highlighted the huge gap in health and life expectancy between Aboriginal and Torres Strait Islander peoples and the rest of the Australian population, and issued an inspiring challenge for closure of the gap within 25 years. By early 2007, “Close the Gap” had become a national campaign supported by more than 40 Indigenous and non-Indigenous organisations and many thousands of individual Australians, and at the end of the same year the Council of Australian Governments promised that all Australian states would work with (and fund) Indigenous communities to address this issue. Soon after Rudd’s Apology, the government signed a Statement of Intent with peak Indigenous health bodies to work together to achieve equality in health status and life expectancy, and established the National Indigenous Health Equality Council. In the past year, targets have been set and considerable funding allocated for ongoing Close the Gap initiatives. The journey has indeed begun!

Scattered throughout this special MJA Indigenous Health issue are brief contributions from some of the key organisations in the Close the Gap campaign (Social justice, Psychology, National Indigenous Health Equality Council, Dentistry, Aboriginal community controlled health services, Oxfam Australia, Nursing, Australian Indigenous Doctors Association). We asked each of them to outline one or two things that will make the most difference in the short term to the longer-term goal of closing the gap. Ranging from personal, through practical to political, their responses share a common thread: the importance of true partnerships with Aboriginal and Torres Strait Islander peoples at every step along the way.

Closing the gap began as an Indigenous-led movement, but it has now inspired Australians at every level and become the foundation for unprecedented political focus on our nation’s biggest challenge. Many of the contributors of these short pieces are telling us that they know what to do next to keep us on track to reach our final destination. Partnerships with and continued leadership by Aboriginal and Torres Strait Islander peoples will be key to the journey’s success.