In Australia, levels of consumer trust in vaccines are justifiably high. But, as health authorities in the United Kingdom discovered when the measles - mumps - rubella vaccine was mistakenly linked with autism, such trust is quickly eroded by reports of adverse events. Vaccines do have many components and additives. For providers and consumers who have sensitivities, allergies, or additional concerns, the description of vaccine components and their possible effects by Eldred et al will be an invaluable resource (→ Vaccine components and constituents: responding to consumer concerns). How common are adverse reactions to vaccines in Australia? Thanks to an excellent monitoring system in this country, Wood and Isaacs can provide an accurate and reassuring answer to this question (→ Monitoring vaccine reactions in Australia).

In these days of changed industrial conditions, privacy concerns, rapid patient turnover and the division of medical practice into silos, the tradition of “morning report”, in which the night doctors hand over new or non-stabilised patients to the day staff, has fallen by the wayside in many Australian hospitals. Tenacious Tasmanians Fassett and Bollipo felt that the concept was so important that they re-invented it three times for the staff at Launceston General Hospital. They share their experiences in “Morning report: an Australian experience”.

The MJA editors love learning so much that this issue contains not one but two Lessons From Practice. In “Dissecting haematoma of the oesophagus masquerading as acute myocardial infarction” Amott and Wright explain why an elderly woman with retrosternal chest pain, nausea and sweating was not having an acute myocardial infarction. Hilmer and colleagues’ patients presented with diarrhoea. Their collected experiences add lansoprazole to the list of drugs that can be associated with microscopic colitis (→ Microscopic colitis associated with exposure to lansoprazole).

Heart of the nation

Because early cardiac failure can be relatively silent, prevalence estimates that rely on hospital data or clinic samples will underestimate the size of the problem. In the first Australian study of its kind, Abhayaratna et al took up the challenge of obtaining a true community prevalence estimate by inviting a random sample of 60-85-year-old Canberrans to undergo an examination by a cardiologist and echocardiography (→ Prevalence of heart failure and systolic ventricular dysfunction in older Australians: the Canberra Heart Study). Krum and Stewart agree that the patients who present with symptoms represent the tip of the iceberg of cardiac dysfunction and suggest that the Canberra Heart Study is a wake-up call to a neglected public health issue (→ Chronic heart failure: time to recognise this major public health problem). 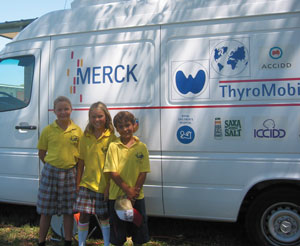 Tasmania has historically been an area of iodine deficiency, resulting in initiatives to fortify bread in that state. Based on a survey of school children in four mainland states (Li et al, “Are Australian children iodine deficient? Results of the Australian National Iodine Nutrition Study”), the rest of Australia may be wise to join in.

Couples using assisted reproductive technologies (ART) such as in-vitro fertilisation face many choices, and recently public attention has focused on the costs and benefits of ART techniques for society as a whole. Two articles in this issue attempt to inject some facts into the current debate. In a research paper that was first published on the eMJA last December, Chambers et al calculate the cost per live baby for women in different age groups (→ Assisted reproductive technology treatment costs of a live birth: an age-stratified cost-outcome study of treatment in Australia); and Wang et al make the case for implanting one rather than two embryos per cycle, to avoid the excess risks to mother and baby associated with multiple pregnancy (→ Reducing multiple pregnancy from assisted reproduction treatment: educating patients and medical staff).

Philosophers have long known that some problems don’t have simple linear solutions. Now public health proponents are coming to the same conclusion. For instance, while, biologically, weight maintenance might mean kilojoules eaten versus those expended, there are multiple confounding issues to consider when trying to get the whole population to slim down. Enter the Oxford Health Alliance, an eclectic new group which seeks pragmatic solutions to public health problems by working in unity with government, society and even big business! The University of Sydney has recently joined the alliance, which Leeder and Colagiuri describe in “The Oxford Health Alliance: old problems, new approaches”.

As our onging series MJA Practice Essentials — Sports Medicine has demonstrated, the evidence base in sports medicine is rapidly expanding. In the next article in the series (5. Recent advances in sports medicine) Brukner et al discuss what recent research has revealed about the diagnosis and treatment of four common lower limb problems.

The universal iodizing of salt had been objected to on the grounds that it was an unjustifiable interference with the people’s rights; but the method had been evolved from the careful biological study of the goître problem and no dangers were incurred.