Histopathology of colonic biopsies from the patients described† 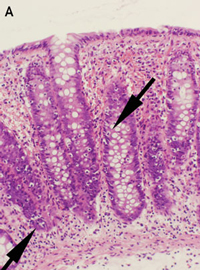 A: Biopsy from Patient 1 shows mild diffuse increase of lymphocytes within the crypt and surface epithelium (arrows). Inflammatory cell infiltration of the lamina propria is minimal and there is no collagen deposition.‡

A 78-year-old woman who normally had one to two bowel motions a day presented with a 3-week history of gradual onset of more frequent and looser motions up to six times a day and occasionally at night. She had urgency and episodes of faecal incontinence. Her motions were watery. There was no improvement after she was treated with tinidazole. Her regular medications were alendronate, hydrochlorothiazide, irbesartan, raloxifene, thyroxine, temazepam, aspirin, thiamine, vitamin C, glucosamine, and evening primrose oil. She had also taken lansoprazole (30 mg capsules) daily for 2 months to treat possible reflux. Sigmoidoscopy showed yellowish, watery stool with mucus and a few tiny scattered patches of intramucosal haemorrhage. Biopsy (Figure A) showed mild lymphocytic colitis (defined by the presence of more than one lymphocyte per 20 epithelial cells). Lansoprazole therapy was ceased and the diarrhoea settled within 24 hours. 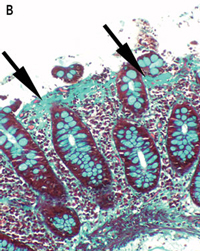 B: Biopsy from Patient 2 shows mild increase in plasma cells in the lamina propria and an obvious subepithelial band of collagen (arrows). There is patchy detachment of the surface epithelium.§

A 53-year-old woman presented to hospital with a 2-month history of diarrhoea and abdominal pain. She was admitted with suspected diverticulitis. Nine months before presentation, she had started taking lansoprazole (30 mg capsules) daily for heartburn. She described having bowel motions seven or eight times per day, and occasionally at night. The diarrhoea had not responded to tinidazole, metronidazole or norfloxacin. Her regular medications were gemfibrozil, tibolone, indapamide and perindopril. Colonoscopy did not detect significant abnormalities. Biopsy showed mild collagenous colitis (Figure B). Lansoprazole therapy was ceased. She was treated with loperamide, then cholestyramine and budesonide. Within 6 months, she was symptom-free without antidiarrhoeal medication. 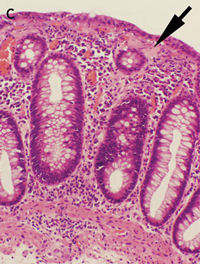 C: Patient 3, there is a mild increase in lymphocytes within the epithelium, and of plasma cells in the lamina propria. The surface epithelium is mildly degenerate, and there is a suggestion of abnormal subepithelial collagen deposition (arrow).‡

A 79-year-old woman had been seen in hospital with a sudden onset of diarrhoea 5 weeks before admission, associated with 10 kg weight loss. She had taken lansoprazole (30 mg capsules) daily for 2 weeks before the diarrhoea began. She had had up to 12 watery motions per day. The diarrhoea had not responded to norfloxacin. Her regular medications were alendronate, perindopril, potassium chloride, chlorthalidone and celecoxib. Appearance on sigmoidoscopy was normal, but biopsies (Figure C) showed mild lymphocytic colitis with occasional subepithelial collagen suggesting transition to collagenous colitis. Lansoprazole therapy was ceased, and she was treated with codeine. Her condition was much improved without antidiarrhoeal medication within a month. When reviewed 6 months later, she was having two loose motions daily, and the celecoxib (200 mg daily) was withdrawn.

* All three patients had negative results on serological tests for coeliac disease (transglutaminase and endomysial antibody) and normal serum IgA levels. † Follow-up biopsies were not taken. ‡ Stained with haematoxylin and eosin. § Stained with Masson Trichrome, which shows collagen in green.

Microscopic colitis is increasingly recognised as a major cause of persistent diarrhoea.1 It is an idiopathic clinicopathological syndrome of chronic watery non-bloody diarrhoea associated with a normal appearance on colonoscopy and specific histopathological changes of lymphocytic and/or collagenous colitis. There is a high rate of spontaneous resolution and relapse in microscopic colitis, and effective treatment is limited.

The pathogenesis of microscopic colitis is poorly understood and is thought to be related to a poorly regulated epithelial immune response to luminal or epithelial antigens including bile acids, toxins, or infectious agents.2 Microscopic colitis has been associated with autoimmune diseases and with exposure to medications, predominantly non-steroidal anti-inflammatory drugs, and, rarely, salicylates, simvastatin, ticlopidine, ranitidine, carbamazepine, Cyclo 3 Fort (a combination of Ruscus aculeatus extract, hesperidin methylchalcone, and ascorbic acid), flutamide, gold salts, and, recently, lansoprazole.2

Lymphocytic and collagenous colitis are probably aetiologically related, and may be a spectrum of the same disease.3 This is supported by our report of three lansoprazole-associated cases, in which one showed lymphocytic colitis, one showed collagenous colitis and one showed transitional features of both on histopathological examination. The inflammatory infiltrate and collagen deposition in these cases was less severe than that seen in typical cases of lymphocytic and collagenous colitis, probably because of the limited periods of exposure to the inciting agent. Interestingly, Patient 2 had the greatest collagen deposition and the longest exposure to lansoprazole. The rapid resolution of the symptoms on cessation of lanzoprazole therapy in Patient 1 may be related to the very mild lymphocytic infiltrate and lack of collagen deposition, or perhaps lansoprazole caused diarrhoea through another mechanism in this case.

Adverse drug reactions can only be recognised if doctors maintain a high index of suspicion. It is not possible to know every possible reaction to the medications that patients are exposed to, and some may not have been recognised before. The absence of an immediate temporal relationship between a drug and the associated disorder (as was seen in the cases presented here) may contribute to failure to diagnose a drug-induced disease.

Drugs and their metabolites may affect the colon directly through their pharmacological actions, or through hypersensitivity reactions. Drugs also act indirectly on the colon by altering colonisation by gastrointestinal organisms.4 The association between lansoprazole and microscopic colitis may be related to its action on the colonic proton pump, affecting colonic secretions and pH, which may affect colonic flora and bile salt solubility.5 Alternatively, there may be an idiosyncratic direct hypersensitivity reaction by the colonic mucosa.

Our cases illustrate the importance of considering exposure to medication as a cause of chronic diarrhoea and particularly microscopic colitis, and that adverse drug reactions are not always class effects. Stopping the causative medication may reverse the abnormality in this difficult-to-treat condition. In patients with persistent watery diarrhoea, biopsies should be performed even if colonoscopic appearances are normal, and pathologists should be informed of the clinical possibility of microscopic colitis, as the histological changes may be subtle.