Rheumatic heart disease (RHD) and its antecedent acute rheumatic fever (ARF) cause preventable morbidity and early mortality in many disadvantaged communities; the incidence of ARF in Aboriginal and Torres Strait Islander communities is among the highest in the world.1 In Australia, ARF and RHD are notifiable except in the Australian Capital Territory, Tasmania, and Victoria,2 and their epidemiology is relatively unexplored in these jurisdictions.

We analysed routinely collected hospital admissions data for Victorian residents for whom ARF/RHD was the principal diagnosis (1 July 2006 – 30 June 2018) in the Victorian Admitted Episode Dataset (VAED), and death data for Victorian residents for whom ARF/RHD was the primary cause of death (1 July 2006 – 31 December 2017; later data not available) in the National Cause of Death Unit Record File. We estimated hospital admission and mortality rates (based on Australian Bureau of Statistics annual census data) and calculated incidence rate ratios (IRRs) using Poisson regression. As ARF is a disease of children and young adults,1 we confined our ARF analyses to people under 40 years of age. We report analyses of RHD admissions of Indigenous Australians both for those under 40 years of age and for all ages (further details: online Supporting Information). The University of Melbourne Faculty of Medicine, Dentistry and Health Science Human Research Ethics Sub‐Committee approved our study (reference, 1852332).

In Victoria, RHD was less frequent in people under 40 years of age than in older people, but ARF and RHD were more frequent among Indigenous than non‐Indigenous people under 40. An earlier analysis (for the period 2015–17) found that the crude ARF/RHD hospital admission rates for Indigenous and non‐Indigenous Victorians were similar (7.8 v 10.8 per 100 000 population)3 — lower than the national rates (80.5 v 14.5 per 100 000 population), but similar to those for New South Wales (11.7 v 13.3 per 100 000 population)3 — but combining rates for both disorders and all ages may obscure differences. We did not have Victorian data for people from other ethnic groups with links to countries with high burdens of ARF/RHD, including New Zealand Māori and Pacific Islanders.4

The considerable morbidity and mortality caused by ARF and RHD could be reduced by regular treatment and monitoring.1 A patient register and control program for Victorians under 40 years of age would help achieve this aim, similar to New South Wales, where ARF and RHD are notifiable conditions and the burden is similar to that in Victoria. A register would improve patient management, better define disease epidemiology, and assist the evaluation of interventions. The differences in hospitalisation rates we found for younger people at risk of poor outcomes lends weight to considering a Victorian registry. 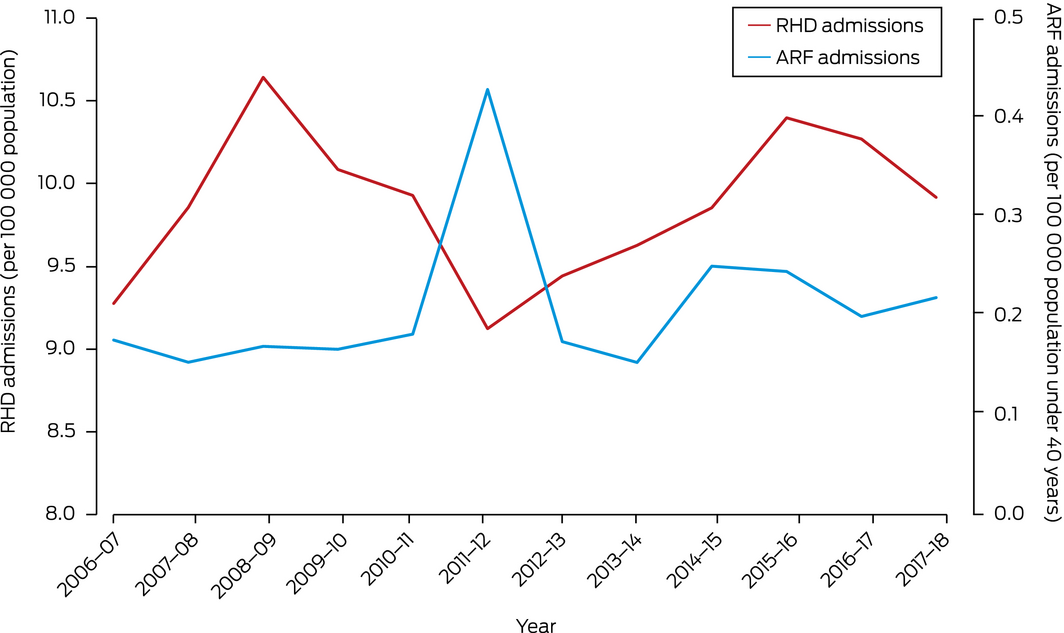 Kate Francis (Clinical Epidemiology and Biostatistics Unit, Murdoch Children’s Research Institute) performed the analyses presented in the Supporting Information table. Ailish Learmonth (Deakin University) assisted with development of the Streptococcus A Diseases Data Linkage in Victoria study protocol and with the ethics approval application. We thank Kathleen Bapaume and Tom Liu at the Centre for Victorian Data Linkage, Victorian Department of Health and Human Services, for providing the linked data.