Main outcome measures: Practice location types eight years after graduation (2019/2020) as recorded by the Australian Health Practitioner Regulation Agency, classified as rural or metropolitan according to the 2015 Modified Monash Model; changes in practice location type between postgraduate years 5 (2016/2017) and 8 (2019/2020).

Conclusion: The distribution of graduates by practice location type was similar five and eight years after graduation. Recruitment to and retention in rural practice were higher among graduates with extended RCS experience. Our findings reinforce the importance of longitudinal rural and regional training pathways, and the role of RCSs, regional training hubs, and the rural generalist training program in coordinating these initiatives.

The known: The Australian government supports programs that encourage doctors to practise in rural and remote locations, including the Rural Clinical Schools program.

The new: The proportions of 2011 medical graduates working in regional and rural communities were similar five and eight years after graduation from universities with rural clinical schools (about 14%). Rural origin and extended rural clinical school placement (for both rural and metropolitan origin students) were each associated with moving to and remaining in rural practice.

The implications: Retention is the key feature of a sustainable rural medical workforce. Increasing the opportunities for extended rural placement may be critical to achieving this aim.

The Australian government has invested heavily in programs encouraging doctors to practise in rural and remote areas. For example, the Rural Clinical Schools program places medical students in rural towns for at least one year.1 The first collaborative study that collated data from several Australian universities with rural clinical schools (RCSs) examined the influence of graduates’ geographic origin (rural or metropolitan) and extended RCS placement during training on practice location after graduation; RCS placement increased the likelihood of graduates working in rural areas five years after graduation.2 Similar findings have been reported by single university studies in Australia3,4,5,6,7,8 and another national study,9 reducing the likelihood of institutional bias or differences in rural work opportunities between states.

A sustainable rural workforce is critical to health care in Australia, and the literature proposing relevant principles, measures, and benchmarks is growing.10,11,12 The inadequate level of the rural medical workforce, limited training opportunities, fears of social and professional isolation, and restricted employment opportunities for partners influence junior doctors when deciding where to train and practise. It has been reported that rural and remote health service managers consider “two years to be a reasonable length of employment for doctors”,10 while others regard seven years as realistic.11 Attracting appropriately trained graduates is insufficient: increasing retention is central to overcoming expectations that rural practice is only transitory.

Early medical career practice location is often determined by the availability of traineeships, personal relationships and commitments, and medical speciality.13,14,15 As most specialist training (other than general practice training) is provided in metropolitan areas, many graduates remain in cities until they attain vocational qualifications. One study found that “many junior doctors — even those with a strong interest in rural practice — feel pressured to choose to train in metropolitan locations.”16 However, serving a rural internship is associated with later rural practice.17

It is important to follow medical graduates over time to assess whether their early intentions about practice location are later realised. We therefore assessed associations between the geographic origin and extended RCS experience of graduates and practice location eight years after graduation, as well as with changes in practice location between postgraduate years 5 and 8.

We asked twelve member universities of the Federation of Rural Australian Medical Educators (FRAME; https://ausframe.org) to provide de‐identified 2019/2020 practice location data for domestic graduates from their 2011 graduating classes, as listed in the Australian Health Practitioner Regulation Agency (AHPRA) register. The twelve universities all had RCSs or regional medical schools and had contributed postgraduate year 5 (PGY5) data to an earlier study.2 Most universities provided 2019/2020 data (PGY8) in such a way that it could be linked with their 2016/2017 practice location (PGY5)2 using unique student codes. The participating universities were located in New South Wales (four), Victoria (three), Queensland, Western Australia, Tasmania, and the Australian Capital Territory (one each); six had graduate entry medical programs, three had undergraduate entry programs, and two offered both pathways.

Practice locations were classified according to the 2015 Modified Monash (MM) Model: MM1 areas were classified as metropolitan, MM2 as regional, and MM3–MM7 as rural.18 Graduates were grouped according to their geographic origin (metropolitan, or rural: defined as living in Australian Standard Geographic Classification remoteness areas 2–5 for at least ten years in total or five consecutive years1) and whether they had had an extended RCS placement (at least one year in an RCS). To encourage participation by universities, we collected only information on graduates’ sex, origin, extended RCS placement, and postcode for this study.

The statistical significance of differences between groups was assessed in Pearson χ2 and McNemar tests, in SPSS 25 (IBM). For regional and rural practice eight years after graduation, we estimated absolute risk differences (ARDs), and relative risks (RRs) with 95% confidence intervals (CIs) in Stata 14.2.

Eleven of the twelve universities that had participated in PGY5 data collection2 provided practice locations eight years after graduation for 1631 graduates. Origin status information was missing for 118 graduates and RCS status for one, 25 graduates were practising overseas, one had died, two were not practising medicine, and 56 were not included in the AHPRA database. As matched practice locations were not available from one university (107 graduates), its data were omitted. Accordingly, we included data for 1321 graduates in our analysis; 696 were women (52.7%), 259 were of rural origin (19.6%), and 413 had participated in extended RCS placements (31.3%) (Supporting Information, table).

Change in practice location between postgraduate years 5 and 8

Building on an earlier study,2 we examined differences in the proportions of medical graduates working in rural, regional, and metropolitan areas five and eight years after graduation. One key finding was the net increase in the proportion of 2011 graduates practising in rural areas, from 7.6% five years to 9.4% eight years after graduation. This suggests that some graduates who trained in metropolitan or regional areas moved to rural communities after completing training that could not be undertaken there. This is consistent with the finding of a longitudinal study of University of Western Australia RCS graduates,19 which found that the number working in rural locations increased over 18 years, at the end of which period most postgraduate training would be complete.

It is unclear whether specialty training type influenced our findings, as graduate specialty is only registered with AHPRA after a fellowship is awarded. For some universities, only about 25% of graduates had completed their vocational training eight years after graduation, most frequently general practice, which has a relatively short fellowship pathway (data not shown). Rural general practice training is strongly associated with practice in rural areas up to five years after fellowship award, particularly for doctors with rural backgrounds.13,20 Only limited training in other specialties, however, can be undertaken in rural locations.12 Including the registered specialty in future analyses and longer term follow‐up could clarify its influence (and that of the training pathway) on the choice of practice location.

An adequate rural medical workforce is critical for continuity of care and the health and well‐being of rural communities.11,13,14 As turnover in rural areas is relatively high among early career doctors,14 the good overall retention level we found is encouraging. It is perhaps notable that about 25% of medical students who graduated in 2011 received federal government Bonded Medical Places or Medical Rurally Bonded Scholarships.21

Rural background and extended RCS placement each increase the likelihood of a doctor practising in rural areas during their early postgraduate years, and the two factors are synergistic.2,3,7,8,22 We found that continuing to practise in rural areas eight years after graduation was more likely for rural origin graduates and for graduates who had completed extended RCS placements. Further, movement from metropolitan to regional or rural practice was more frequent among graduates with extended RCS experience, regardless of their origin (Box 3). These findings indicate that early selection and training interventions influence the recruitment and retention of doctors for rural practice beyond the initial postgraduate period.

Our findings suggest that the rural medical workforce could be enlarged by increasing the proportions of rural origin students admitted to medical schools and the availability of extended RCS training. RCS placements increase the likelihood of metropolitan origin graduates practising in rural areas, and should be offered to these students, the majority of medical trainees.19 However, rural origin students should be given priority when extended RCS capacity is limited, as they are even more likely to take up practice in rural areas.

Our findings complement other evidence for the importance of building the capacity for providing general practice and other specialty medical training in regional and rural areas.7,12,22 This critical work, undertaken by RCSs, regional training hubs, and rural generalist training programs, could connect and coordinate rural training pathways across medical school, pre‐vocational, and vocational training, facilitating extended continuous rural clinical training beyond the 12‐month period discussed in our study. These programs should be evaluated with mixed methods approaches to assess workforce supply and retention, the available mix of medical specialities relative to community needs should be examined, and the adherence of the programs to principles for developing a sustainable rural workforce should be reported.12

As the primary AHPRA practice location data do not permit assessment of short term rural rotations or rural clinical outreach activities (eg, telehealth), we may have underestimated the contributions of graduates to meeting the health care needs of rural communities. The question of rural retention can be more urgent for specific communities, but we could not examine movement at this level; future studies could use registered practice postcodes to assess graduate movement within geographic areas, including between rural communities. Further, we pooled data from universities in very different geographic areas. While all participating universities share the goals of the Rural Health and Multidisciplinary Training program, the specific aims of individual universities determine whether rural workforce outcomes are successful, limiting the extent to which conclusions can be drawn. Our study was designed to facilitate simple, rapid data collection and hence participation by as many universities as possible. Our analysis is consequently limited by not including demographic characteristics that might influence the choice of medical practice location.

The findings of our national study suggest that early educational interventions — selection of students with rural backgrounds, and extended RCS placements — continue to influence choices regarding regional and rural medical practice eight years after graduation. The net movement of doctors from metropolitan to rural practice could be augmented by recruiting more rural origin students and broadening opportunities for extended rural training. Our findings reinforce the importance of developing and maintaining longitudinal rural and regional training pathways, and of the RCSs, regional training hubs, and the rural generalist training program in coordinating these initiatives. 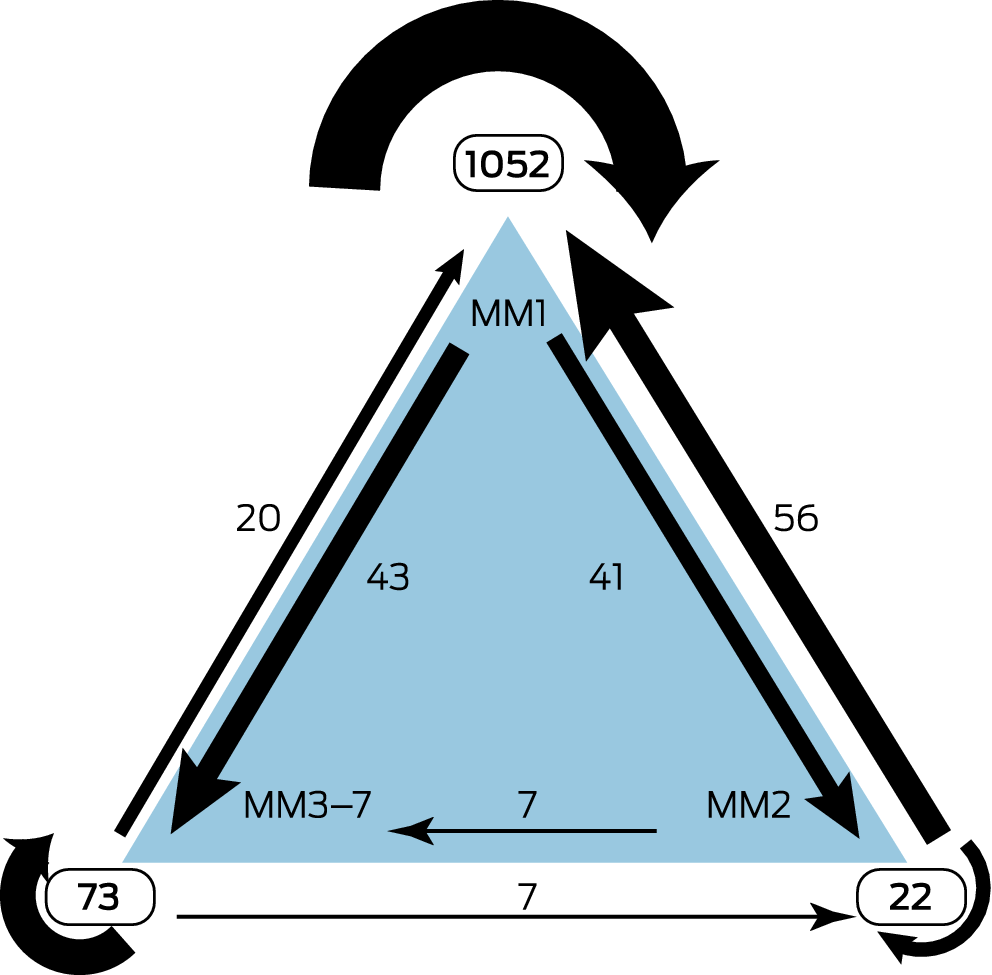