Design, setting and participants: Retrospective cohort study of University of Queensland (UQ) medical graduates who graduated during the period 2002–2011 (contacted via internet, telephone and mail, using information obtained from UQ, the Australian Health Practitioner Regulation Agency, and telephone directory and internet searches) who completed an online or hard copy questionnaire during the period December 2012 to October 2013.

Conclusions: This study strengthens evidence that, after adjusting for multiple confounders, a number of exposures are independent predictors of rural medical practice. The strong positive interaction between rural background and rural clinical school exposure, and the duration-dependent relationships, could help inform policy changes aimed at enhancing the efficacy of Australia's rural clinical school program.

In developed countries, including the United States, Canada and Australia, a fifth to a third of the population live in rural areas yet the number of medical practitioners employed per 100 000 population in those areas is about half that of major cities.1-4 It has long been recognised that rural doctors are more likely to have a rural background and to have had some medical training (undergraduate or postgraduate) in rural areas,5-16 although the effect of undergraduate rural exposure has been questioned.17 Other factors associated with rural practice include being single, having children, having a partner with a rural background, rural primary and secondary education, intention or desire to practise rurally, sex, age, having a bonded scholarship, and medical school attended.18-20

From the early 1990s, the Australian Government introduced national initiatives aimed at encouraging rural practice. This included funding medical schools to increase enrolment of students with a rural background and provide short-term undergraduate rural exposure.21,22 In 2001, to increase the duration of rural exposure, universities began to establish rural clinical schools (RCSs); by 2008, 17 were operating. Participating universities are funded to train 25% of domestic students who are publicly funded (those have a Commonwealth-supported place) in a rural area, defined by Australian Standard Geographical Classification – Remoteness Area (ASGC-RA) categories ASGC-RA2 to ASGC-RA5.23

To track students through medical school and training, the Australian Government has supported a large prospective cohort study involving all Australian medical students — the Medical Schools Outcomes Database and Longitudinal Tracking Project.24 In the future, this study will generate robust data (currently, most participants are undergraduates or are in early postgraduate training).

This study was part of the UQ Medical Graduates Cohort Study — a retrospective cohort study of UQ medical graduates who graduated during the period 2002–2011. Lists of eligible participants (those who had been domestic students [ie, Australian citizens and permanent residents]) and their current contact details, if available, were obtained from UQ. If not available, current suburb and postcode were sought by searching the Australian Health Practitioner Regulation Agency (AHPRA) register of practitioners. This information was used to narrow telephone directory and internet searches. Potential participants were invited by email, post or telephone and sent a link to an online questionnaire, or a hard copy if requested. Since UQRCS attendance was a critical exposure variable but only 20% of potential participants would have attended UQRCS, we targeted this group to improve the power and efficiency of the study.

The questionnaire comprised questions on demographics, family information (parents' rural background, partnership status and partner's rural background), residential history (birth place and location during preschool, primary school, high school and post-school years), boarding school attendance, gap year after high school, scholarships (including bonded scholarships), rural health club membership, tertiary education and postgraduate training, year of medical school graduation, and location of current clinical practice (primary location for those with more than one). The outcome of interest was location of current clinical practice categorised as rural. The primary predictor variables of interest were attendance at UQRCS and rural background; the latter was defined as having resided in a rural area in Australia for at least 5 years since commencing primary school and before commencing UQ medical degree, as per funding parameters.

Of 2833 medical graduates who graduated during the period 2002–2011, 2478 were domestic students. Of these, contact information (email address, postal address or telephone number) was available for 1714. Of these potentially contactable graduates, 142 were initially excluded — emails bounced for 127 (no other contact details were available) and 15 declined to participate. The questionnaire was sent to the remaining 1572, of whom 754 completed it during the period December 2012 to October 2013 (response rate, 48.0% [likely to be an underestimate as the status of sent emails could not be verified]). Characteristics of the participants are shown in Appendix 1.

To explore the effect of the duration of rural background on the adjusted predictive probability of current rural practice, we developed a logistic regression model with explanatory variables: UQRCS attendance v MCS attendance, years spent in a rural area (since primary school and before commencing UQ medical degree) as a continuous variable, and an interaction term between these two variables (Box 3). The predicted probabilities are divergent across the range of years spent in a rural area. In UQRCS attendees with 10 and 20 years of rural exposure, the predicted probabilities of rural practice are 54% (95% CI, 46%–62%) and 79% (95% CI, 69%–89%), respectively.

To determine the representativeness of our sample, we linked 2360 of the 2478 domestic medical graduates (95.2%) to the AHPRA database to determine current practice location. Characteristics of these two groups and crude ORs of rural practice for them are shown in Appendix 3. All characteristics for these two groups are similar except there was a higher proportion who attended UQRCS in the group of 2478 students from which we recruited participants than the group of 2360 for whom data linkage was done (36.6% v 19.8% [476]), which is consistent with our recruitment strategy.

It also shows that there is a strong positive interaction between rural background and UQRCS attendance in enhancing the probability of rural practice. In contrast, training students with a rural background at an MCS or training students with a metropolitan background at UQRCS does not have a statistically significant effect on probability of rural practice (although trends exist [ORs, 1.46–1.83]). Our finding that having a bonded scholarship is associated with rural practice is not unexpected given that these graduates are financially committed to working in a rural area or an underserviced area, many of which are rural.

Few studies have used multivariate analysis to identify independent determinants of rural practice. A retrospective survey of 264 rural and 179 urban practitioners in Ontario, Canada, found that rural background and any rural undergraduate training were independent predictors of rural practice (ORs, 3.31 and 2.46, respectively), as were rural postgraduate training, medical school location and being male.19 In this survey, the main effects were reported but the interactions were not.

A multivariate logistic regression analysis with seven variables using a sample of 359 medical graduates in the US found that the only independent predictors of rural practice were rural background and intention at medical school entry to become a family physician.18 Interaction between the variables was not reported.

At the University of Minnesota (UMN) Medical School, 27% of students had one or two different rural exposures — first 2 years of undergraduate training in a regional city (UMN-Duluth) and/or 9 months with a primary care preceptor in a rural community in their third year (Rural Physician Associate Program [RPAP]).25 In multivariate analysis for the outcome of current rural practice, RPAP, UMN-Duluth and rural background were independent predictors of rural practice (ORs, 4.6, 4.1 and 2.8, respectively). Other confounders were not assessed. When two- and three-way interactions were assessed, only UMN-Duluth training plus rural background was statistically significant and the interaction was negative (OR, 0.56 [95% CI, 0.33–0.96]), in contrast to our finding.

In a recent data-linkage study conducted by the Rural Clinical School of Western Australia (RCSWA), rural practice of 1017 medical graduates who graduated during the period 2002–2009 was determined from the AHPRA register and rural background was defined by medical school entry through a quarantined rural pathway.26 In a multivariate model with interactions, the OR for rural practice for students with rural background who attended RCSWA compared with those with metropolitan background who did not attend RCSWA was 7.5 (95% CI, 3.5–15.8) — a very similar result to ours.

Although the study did adjust for age and sex, no adjustments were made for other confounders. Further, the proportion of graduates practising rurally in the Western Australian and Queensland cohorts is markedly different (7.7% and 27.2%, respectively), which may be partly due to the lower proportion of the population living, over the study period, in areas categorised as RA2 to RA5 in Western Australia compared with Queensland (27% v 42%).

Our study has strengths and limitations. The main strength is that extensive data were available on sufficient numbers of graduates with different exposures to provide power for multivariate analyses with interactions on the outcome of rural practice. The study was conducted in a single large medical school with a uniform curriculum across 4 years, except that in year 3 and/or year 4 clinical training was delivered at UQRCS or an MCS. The findings may be generalisable to other Australian medical schools that offer MCS and RCS placements but perhaps not to regional medical schools that have much higher proportions of rural background students and routinely deliver rural exposure across multiple years of their courses.27

Our sample represents only 30.4% of domestic 2002–2011 medical graduates from UQ, so there could have been participation bias. However, a previous study with a response rate of 64% found that 40% of UQRCS attendees were in rural practice28 — a very similar result to ours (42%). In addition, the consistency of the result for rural practice between 2007–2011 graduates and 2002–2006 graduates (Appendix 2) suggests no participation bias relating to time since graduation. Further, our analysis of representativeness suggests that sampling would not have caused significant bias in the results.

Our results may be affected by self-selection bias regarding clinical school attended — that is, students who attend UQRCS may do so because they intend to enter rural practice. In the first few years of teaching at UQRCS, most students were conscripted, but in recent years 70%–90% have had UQRCS placement as their first preference. However, other factors influence students' first preferences, such as free or highly subsidised accommodation, academic reputation, patient and teacher access, lifestyle and work opportunities.24,29 Rural intention has been shown to be associated with other rural exposures (rural background or rural upbringing, having a spouse who had lived in a rural area),30,31 which we adjusted for. Also, other unknown confounders may have influenced our results.

Between 2002 and 2012, the number of full-time equivalent doctors practising in Australia per 100 000 population (FTE rate) increased by 33% in metropolitan areas but increased by 50%–75% in rural areas,32,33 indicating reversal of the previous downward trend seen for GPs.1 Nevertheless, the FTE rate remains 33%–39% lower in rural areas for all doctors and 48%–78% lower for specialists, so more needs to be done.

Rural clinical placements are limited and more expensive than metropolitan clinical placements, so policy measures that maximise the cost-effectiveness of RCS programs are warranted. Our results suggest that the probability of rural practice could be increased by policies that increase the proportion of RCS attendees who have a rural background and who attend for more than one year. In addition, preferential recruitment of students with a background of longer-term rural residence should be considered. 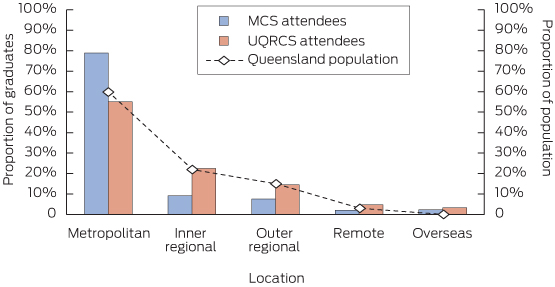 3 Predicted probabilities of current rural practice, according to duration of rural background, by clinical school attended* 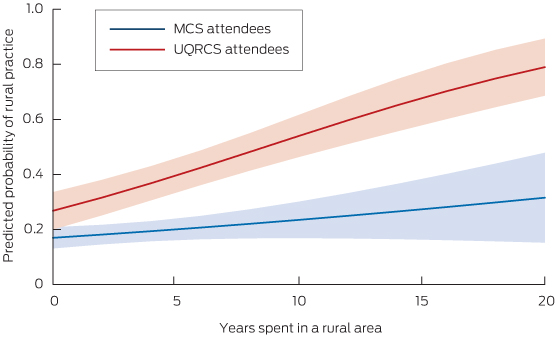 MCS = metropolitan clinical school. UQRCS = University of Queensland Rural Clinical School. * Based on a logistic regression model with the following as explanatory variables: UQRCS attendance v MCS attendance, years spent in a rural area (since primary school and before commencing University of Queensland medical degree) as a continuous variable, and an interaction term between these two variables. Shaded bands represent 95% CIs.

This study was funded by the Australian Government Department of Health and Ageing under the Rural Clinical Training and Support program.