Objectives: To assess the chemical composition of electronic cigarette liquids (e‐liquids) sold in Australia, in both their fresh and aged forms.

Main outcome measures: Chemical composition of 65 Australian e‐liquids — excipients/solvents, flavouring chemicals, other known e‐liquid constituents (including nicotine), and polycyclic aromatic hydrocarbons — before and after an accelerated ageing process that simulated the effects of vaping.

Results: The measured levels of propylene glycol and glycerol often diverged from those recorded on the e‐liquid label. All e‐liquids contained one or more potentially harmful chemicals, including benzaldehyde, menthol, trans‐cinnamaldehyde, and polycyclic aromatic hydrocarbons. Nicotine or nicotyrine were detected in a small proportion of e‐liquids at extremely low concentrations.

Conclusions: Australian e‐liquids contain a wide variety of chemicals for which information on inhalation toxicity is not available. Further analyses are required to assess the potential long term effects of e‐cigarette use on health.

The known: E‐cigarettes are increasingly popular in Australia, but little is known about the chemicals inhaled by users. Evidence is mounting that e‐cigarettes are not benign and can pose significant health risks.

The new: Our comprehensive chemical assessment of Australian e‐liquids identified a wide range of potentially harmful chemicals in these liquids, both in their purchased forms and after simulated vaping.

The implications: Australian e‐liquids include potentially toxic chemicals, for many of which no information on inhalation health effects are available. Despite the sale of nicotine‐containing e‐liquids without prescription being illegal, trace amounts were detected in some samples, with implications for their effects on health and addiction.

Electronic cigarettes (e‐cigarettes) are a relatively recent development, and are often marketed as alternative nicotine delivery systems for tobacco smokers.1 Research into e‐cigarettes has increased substantially in recent years, together with debate about their role in tobacco harm reduction and in normalising cigarette smoking. Central to the discussion are the potential health effects of e‐cigarettes, many of which are related to the chemical composition of the “e‐liquid” used.2

E‐liquids typically consist of a glycerol and propylene glycol base, flavourings, nicotine, and other chemicals that are heated, aerosolised, and inhaled. An emerging body of evidence suggests that e‐liquids often contain a range of potentially toxic chemicals.2,3,4,5,6,7,8,9,10 However, information about the composition of e‐liquids used in Australia is limited. This is important, as the Australian regulatory status of e‐cigarettes and e‐liquids is complex, differentiating the market from that of many other countries. E‐cigarettes and e‐liquids that do not contain nicotine are largely unregulated in most states, and no devices have been approved for therapeutic use.11 However, we have previously reported that e‐liquids labelled “nicotine‐free” often contain nicotine.6 Further, there is evidence that some common e‐liquid ingredients react with each other9 or with components of the e‐cigarette device,12 or may be converted into other chemical species when heated.

Analysis of e‐liquids that have been “aged” by repeated heating and cooling may therefore provide additional information about the potential effects on health of e‐cigarette use. We employed gas chromatography‒mass spectrometry to analyse 65 Australian e‐liquids for common excipients, flavourings, nicotine, polycyclic aromatic hydrocarbons, and other chemicals, both in their fresh state and after subjecting the e‐liquids to an accelerated ageing process that simulates the effect of “vaping”.

We purchased a range of e‐liquids from Australian online and brick‐and‐mortar stores. Online suppliers of e‐liquids were deemed eligible sources if they were operational, were based in Australia, sold e‐liquids (some stores sold only e‐cigarette devices), and sold their own brand of e‐liquids. Online suppliers were identified in a Google search (February 2020) for the term “Australian e‐liquid”. Of the first 25 search results, ten were for eligible online e‐liquid suppliers; we purchased the five best selling e‐liquids from each supplier, as reported on their websites. We also purchased 15 e‐liquids from brick‐and‐mortar stores in our home state, Western Australia, selected as a cross‐section of local brands and manufacturers at the time of purchase; three were manufactured in New South Wales, 12 in Western Australia. All 65 e‐liquids were described as being nicotine‐free, and they encompassed a wide range of flavours, including ice/menthol, fruit, dessert, and tobacco (Supporting Information 1).

Selection of chemicals for analysis

Our analytical methods are fully described in online Supporting Information 2. Briefly, analytical standards for each chemical were purchased from Sigma‐Aldrich Australia, Rowe Scientific, or Cayman Chemical. As a simple solvent does not reflect the sample matrix of commercial e‐liquids, standards were prepared for analysis in 50% propylene glycol/50% glycerol.

Analytes were extracted from the sample matrix by solid phase micro‐extraction, which enables solventless extraction using a fused silica or stainless steel fibre coated with a thin film polymer. Headspace (gas phase) analysis using solid phase micro‐extraction removes a large fraction of the interference by the propylene glycol/glycerol matrix (> 90% of the sample by mass), and has previously been used for the analysis of volatile compounds, additives, and flavours in e‐liquids.13 We used a divinylbenzene/carboxen/polydimethylsiloxane fibre for all analyses (Supelco). Polar compounds were separated on a 30 m × 0.25 mm HP‐INNOWax (polyethylene glycol) analytical column (Agilent J&W), with a film thickness of 0.25 µm and 4‐bromophenol‐2,3,5,6‐d4 as internal standard. Non‐polar compounds and PAHs were analysed on a 30 m × 0.25 mm Zebron ZB‐5MS analytical column (Phenomenex) with a film thickness of 1 µm and biphenyl‐d10 as internal standard. Analytes were detected by mass spectrometry (Agilent 6890N GC/Agilent 5973 network mass selective detector) in electron impact ionisation mode (70 eV); to optimise sensitivity, compounds were quantified in selected ion monitoring mode.

To evaluate chemical changes resulting from vaping (aerosol generation from evaporation and condensation), which can cause thermal decomposition, oxidation, and polymerisation of e‐liquid components, we developed a method for simulating the ageing of e‐liquids (Supporting Information 2). After accelerated ageing, e‐liquids were re‐analysed using the same techniques as for fresh e‐liquids.

Ethics approval was not required for this study.

Benzyl alcohol, a solvent/flavour enhancer, was found in 42 of 65 e‐liquids and 32 of 65 aged e‐liquids, at levels of up to 1687 mg/L (Supporting Information 1). Benzyl alcohol, also found in e‐liquids by other studies,8,14,15 is a dermal sensitising agent and skin allergen that elicits severe reactions in some people.16

Nicotine was found in trace amounts in six fresh e‐liquids (maximum, 3.25 mg/L) but not in aged e‐liquids (Box 2; Supporting Information 1). In our earlier study, six of ten e‐liquids contained nicotine (maximum, 2900 mg/L).6 The results for our more recent samples may indicate cleaner manufacturing processes, or that nicotine was present as nicotine salts rather than as freebase nicotine.17 Nicotine is relatively common in “nicotine‐free” e‐liquids,18 with implications for health and addiction. Nicotine in Australian “nicotine‐free” e‐liquids could be the result of accidental contamination or poor quality control during manufacture.

Nicotyrine, formed by the dehydrogenation and oxidation of nicotine,5 is not usually detected in e‐liquids unless they have been exposed to air, in which case it accumulates over time. We detected it in seven fresh (including two that also contained nicotine) and nine aged e‐liquids (maximum, 2.9 µg/L), indicating that they had previously contained nicotine.

A range of flavouring chemicals were detected in fresh and aged e‐liquids (Box 3; Supporting Information 1). Some, including furfural, thymol, and 4‐(4‐methoxyphenyl)‐2‐butanone were found only infrequently or at very low levels. Benzaldehyde, added to e‐liquids for its almond‐like flavour, was detected in 60 fresh and 61 aged e‐liquids at concentrations ranging from 11.4 µg/L to 17.3 mg/L. Benzaldehyde inhibits microsomal cytochrome P450 2A6 (CYP2A6)19 — increasing systemic nicotine exposure and blood nicotine concentrations in smokers20 — reduces phagocytosis,10 and is an inhalation irritant.21 Benzaldehyde can also react with propylene glycol in e‐liquids, producing aldehyde propylene glycol acetals9 that activate airway irritant receptors.22

Other flavouring chemicals we found frequently or at high concentrations were:

The high frequency of detection and the high concentrations of these chemicals have concerning health implications. Menthol enhances the addictive properties of nicotine23 and inhibits nicotine metabolism.20 Menthol was detected in most e‐liquids, but only a small proportion were labelled as being “menthol”‐ or “ice”‐flavoured. Conversely, one “menthol” e‐liquid contained no menthol, and may have instead contained potentially carcinogenic analogues such as pulegone, or synthetic “coolants” such as N‐ethyl‐p‐menthane‐3‐carboxamide.

Ethyl maltol is added to e‐liquids as a sweetener. The effects of heating and inhaling it are largely unknown, but it increases free radical formation in e‐cigarette aerosols.4 Free radicals induce oxidative stress, which affect cell survival and proliferation, and inflammation. Ethyl maltol reacts with iron and copper (potentially present in e‐liquids as coil residue) to produce toxic hydroxypyranone complexes.12

Ethyl vanillin is used widely in foods, beverages, cosmetics, and drugs for its potent vanilla odour and flavour. In e‐liquids, it reduces oxidative burst10 and inhibits in vitro free radical formation.4 Like benzaldehyde, both trans‐cinnamaldehyde and ethyl vanillin react with propylene glycol in e‐liquids to produce aldehyde propylene glycol acetals.9

We found 2‐chlorophenol in 27 fresh and 30 aged samples, at concentrations of up to 206 mg/L (Box 2; Supporting Information 1). Similar chemicals have been identified as pesticide or herbicide residues or decomposition by‐products in canola oil,24 from which glycerol is derived. While not as ubiquitous as in our earlier study,6 this acutely toxic chemical, used in disinfectants and insecticides, remains a problem for the e‐liquid manufacturing process.

PAHs are produced during the thermal decomposition of organic material, including tobacco and fossil fuels. Lower temperature thermal decomposition in e‐cigarettes generally produces a greater proportion of low molecular weight PAHs, such as acenaphthylene, fluorene, and anthracene. Most PAHs are known or suspected carcinogens, and exposure has been linked with a range of adverse health effects in humans.25 The health effects of inhaling specific individual PAHs, however, have not been studied in detail. We generally detected PAHs at very low levels (Box 4; Supporting Information 1). The accelerated ageing process did not increase the levels of any PAH; those of benzo[a]pyrene, benzo[b]fluoranthene, benzo[k]fluoranthene, and pyrene were all markedly lower in aged than in fresh e‐liquids; indeed, benzo[a]pyrene and benzo[b]fluoranthene were not detected in aged e‐liquids. These high molecular weight PAHs may have been chemically modified to low molecular weight PAHs (which we did not analyse), or PAHs formed during the ageing process may have been preferentially volatilised and not recovered.

Our findings support and build upon earlier reports on the chemical composition of e‐liquids. We found that a range of harmful chemicals are present, and that the heating/cooling/ageing process can affect e‐liquid chemical composition. We acknowledge some limitations to our investigation, including the fact that we measured only a pre‐determined selection of chemical analytes. Future studies would benefit from a discovery approach to identifying novel chemicals in e‐liquids. Further, we acknowledge that the chemical composition of e‐liquids is not entirely representative of the aerosol inhaled by e‐cigarette users. Nevertheless, our finding that every e‐liquid tested contained one or more chemicals potentially harmful to health provides a clear motivation for further investigations.

Box 1 – Propylene glycol and glycerol content of 62 e‐liquids, as proportions of the labelled amount* 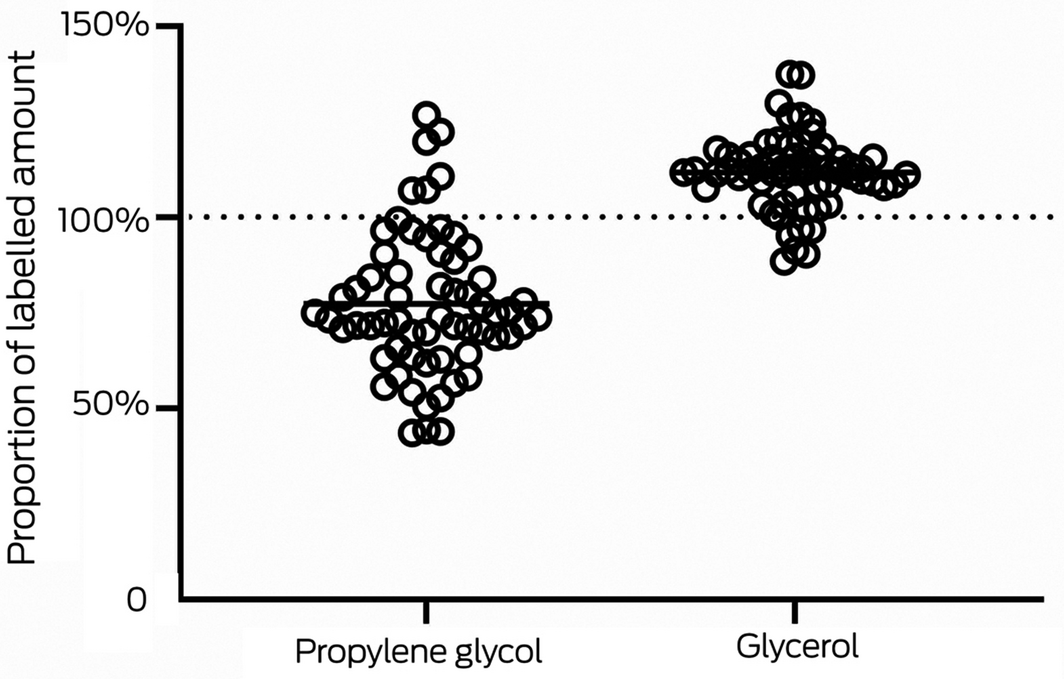 Box 2 – Concentrations of non‐flavouring chemicals in 65 Australian e‐liquids, fresh and after ageing

The values for individual products are included in the online Supporting Information 1.

Box 3 – Concentration of flavouring chemicals in 65 Australian e‐liquids, fresh and after ageing 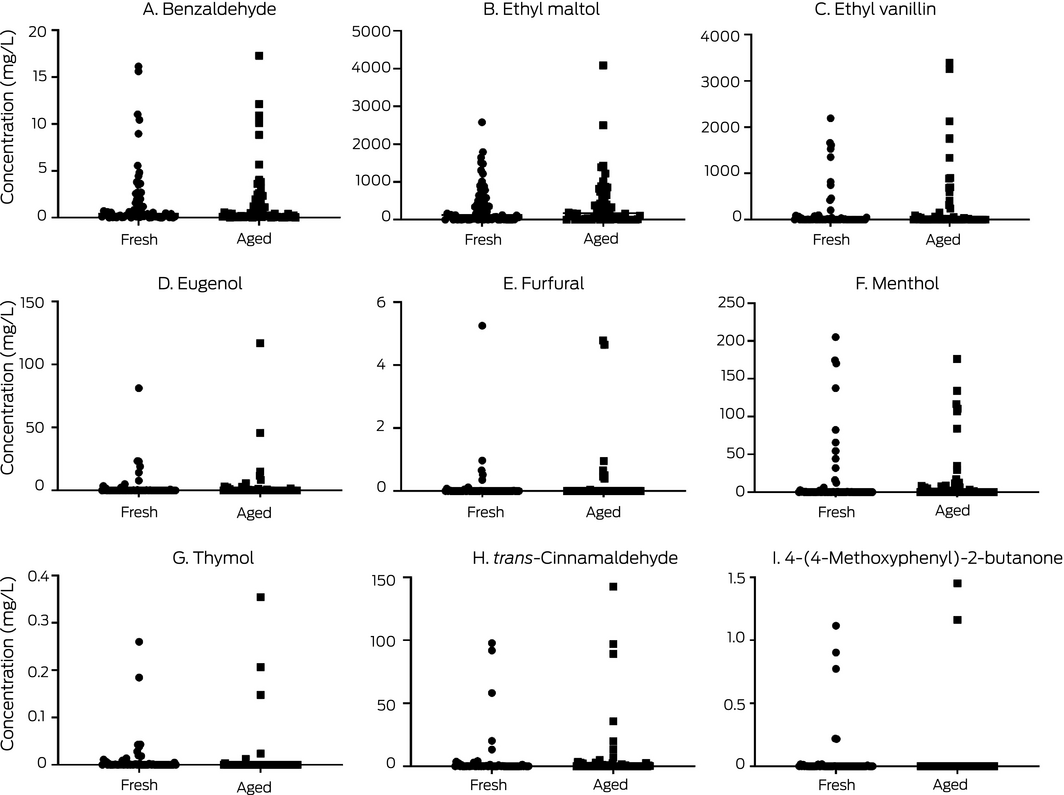 The values for individual products are included in the online Supporting Information 1.

Box 4 – Concentration of polycyclic aromatic hydrocarbons in 65 Australian e‐liquids, fresh and after ageing 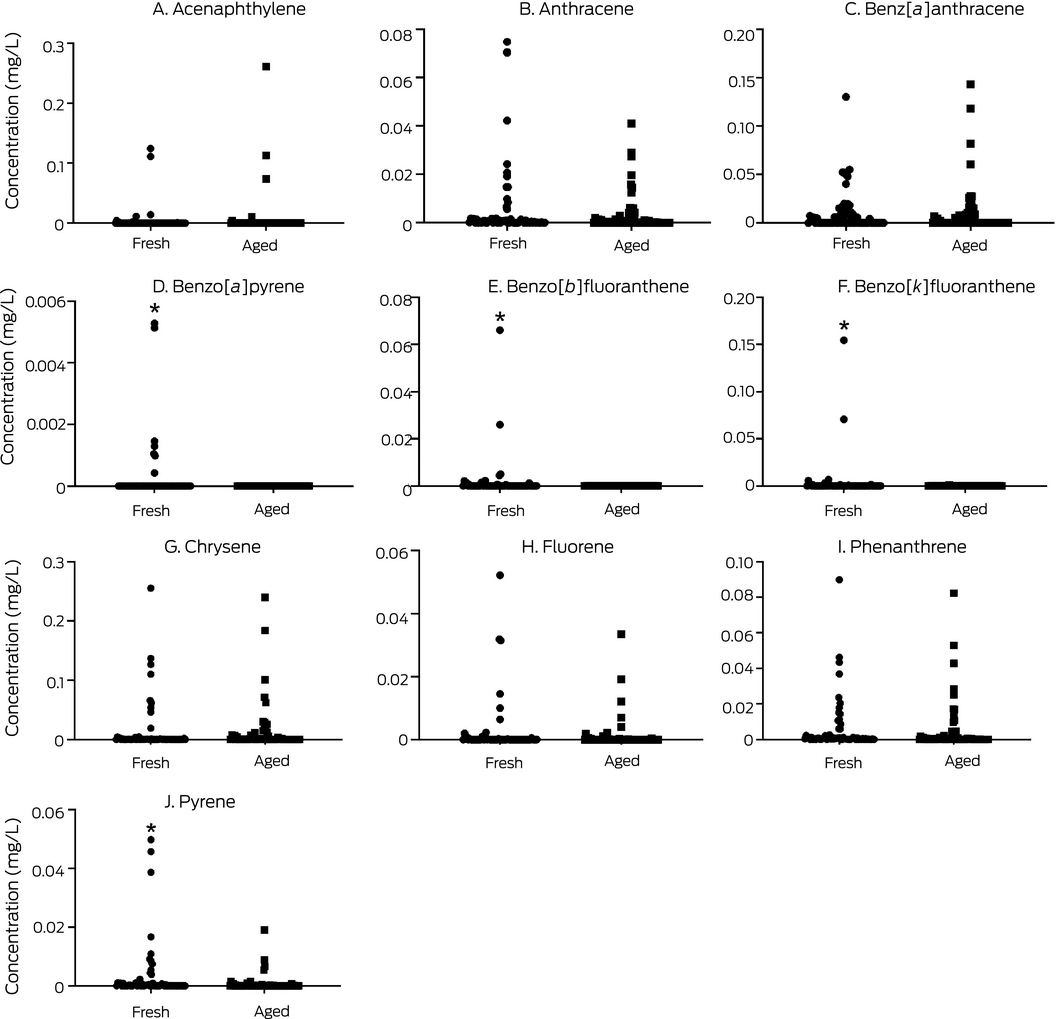