Objective: To compare the characteristics and outcomes of drug‐induced liver injury (DILI) caused by paracetamol and non‐paracetamol medications, particularly herbal and dietary supplements.

Conclusion: In our single centre study, the proportion of cases of people hospitalised with DILI linked with herbal and dietary supplements has increased since 2009. Ninety‐day transplant‐free survival for patients with non‐paracetamol DILI, especially those with supplement‐related DILI, is poorer than for those with paracetamol‐related DILI.

The known: Drug‐induced liver injury (DILI) is the most frequent cause of acute liver failure in Western countries. The proportion of cases caused by herbal and dietary supplements has increased overseas.

The implications: Rigorous regulatory oversight of herbal and dietary supplements and improved, culturally appropriate community education about their risks are needed in Australia.

Among the increasing range of prescription and non‐prescription pharmacological agents are some that can cause drug‐induced liver injury (DILI) through direct or indirect hepatotoxicity or as the result of an idiosyncratic reaction.1 DILI is responsible for 10% of hospitalisations following abnormal liver function test results2 and for 3–5% of hospitalisations with jaundice.3 It is a leading cause of liver‐related death, and the most common cause of acute liver failure in Western countries.1

Although medication packaging (eg, stronger, standardised warnings in package inserts), design (informed by pre‐clinical toxicity screening models), and safety monitoring have improved,1 paracetamol‐related and non‐paracetamol DILI remain important clinical problems, as their incidence has not declined.4 A recent analysis found that hospitalisations for paracetamol‐related DILI in Australia increased by 108% during 2004–2017.5 There are DILI registries in the United States, Europe, and Asia, but the epidemiology and prognosis of non‐paracetamol DILI have not been investigated in detail in Australia.

We undertook a retrospective analysis of data for all adults (18 years or older) admitted with DILI to the A.W. Morrow Gastroenterology and Liver Centre, Royal Prince Alfred Hospital, Sydney, during 1 January 2009 – 31 August 2020. Cases of DILI were identified by the International Classification of Diseases, tenth revision (ICD‐10) code for “toxic liver disease” (K71) and by searching our liver transplant database for patients who underwent transplantation following acute liver failure secondary to DILI. Patients were excluded if liver injury was not drug‐induced or if they developed DILI during hospital admission for other reasons, as were patients with paracetamol poisoning (ICD‐10 code T39.1) without “toxic liver disease”. All cases of DILI were independently confirmed in patient medical records by two investigators.

Patient data, including baseline laboratory values on admission, were extracted from electronic medical records. Acute liver failure was defined as the presence of hepatic encephalopathy and an international normalised ratio (INR) of more than 1.5 within 26 weeks of symptom onset, in the absence of chronic liver disease. We assessed cases with the following scores and criteria:

Statistical analyses were performed in SPSS 22.0 (IBM). Continuous variables were summarised as means with standard deviations (SDs) or medians with interquartile ranges (IQRs). The statistical significance of differences between groups was assessed in χ2 or Fisher exact tests (categorical parameters) and Student t or Mann–Whitney tests (continuous parameters). The primary outcome was 90‐day transplant‐free survival (time to death or transplantation); factors associated with the primary outcome were assessed in a multivariable Cox regression model. Potential variables were selected on the basis of information in published literature and clinical knowledge, followed by application of the least absolute shrinkage and selection operator (LASSO) method; the tuning parameter was selected to minimise the mean square error in tenfold cross‐validation. Selection‐adjusted confidence intervals (CIs) and P values for the LASSO estimate using the chosen tuning parameter value were estimated. Multicollinearity between covariates was assessed with a variance inflation factor; values exceeding 5 were deemed significant. Cumulative probability of study endpoints was estimated in Kaplan–Meier analyses. Time‐to‐event curves for groups were compared in log‐rank tests.

The study was conducted according to the Declaration of Helsinki, and was approved by the Sydney Local Health District Human Research Ethics Committee, which waived the requirement for informed consent by patients (X20‐0108 and 2020/ETH00726).

Among the 69 patients with non‐paracetamol‐related DILI, the most frequently implicated medications were antibiotics and antifungal medications (19, 28%), herbal or dietary supplements (15, 22%), anti‐tuberculosis medications (six, 9%), and anti‐cancer medications (five, 7%) (Box 4). Most of these medications are listed in the LiverTox database15 as causing DILI. The implicated medication was initiated a median of 57 days (IQR, 25–84 days) before admission for a median stay of 38.5 days (IQR, 19–76 days). The likelihood of the implicated medication having caused DILI was rated by RUCAM as possible in eleven cases (16%), probable in 57 (83%), and highly probable in one case (1%). Liver biopsy was performed for 36 patients (52%); all had histopathology consistent with DILI. As treatment, 24 patients received corticosteroids (35%) and 12 ursodeoxycholic acid (17%).

Sixty‐two of the 112 cases of paracetamol‐related DILI for which the relevant information was available (55%) were intentional single overdoses (median, 21.5 g; IQR, 13–36 g) and 50 were staggered ingestions (median, 5.5 g per day; IQR, 4–9 g per day). Thirty‐eight of 113 patients had co‐ingested other medications (34%), including 14 who had taken codeine and 12 who had taken non‐steroidal anti‐inflammatory drugs. The likelihood of paracetamol causing DILI was rated as possible for one patient (1%), probable for 46 (43%), and highly probable for 60 patients (56%; RUCAM not available: eight patients). Intravenous N‐acetylcysteine was administered to 113 patients (98%) a median of 16 hours (IQR, 6–39 hours) after paracetamol ingestion.

Admission to intensive care with complications of acute liver failure (84 of 155, 73% v 24 of 69, 35%) and haemodialysis (56 of 115, 49% v 8 of 69, 11%) were each more frequent for patients with paracetamol‐related DILI than for those with non‐paracetamol DILI. Within the latter group, the rates were similar for cases in which herbal or dietary supplements were or were not implicated (data not shown).

DILI is a leading cause of acute liver failure and liver‐related death, particularly in Western countries. Data on its epidemiology in Australia are limited, especially on cases caused by drugs other than paracetamol. Our study is the first to specifically investigate cases of non‐paracetamol DILI causing hospitalisation in Australia over a period of several years.

In our study, the proportion of DILI cases linked with herbal and dietary supplements increased over time. The overall proportion of non‐paracetamol DILI cases attributed to supplements (22%) was similar to that reported in the United States (20% in 2013)7 and Iceland18 (2010–2011: 16%). As in other Western countries, bodybuilding and weight loss supplements were implicated in half of these cases, but the number in which traditional Chinese medicines were implicated was higher than in other reports,6,19 perhaps unsurprising in light of the strong demand for traditional Chinese medicines in Australia.20 Most patients with supplement‐related DILI had hepatocellular patterns of liver injury, as previously reported for similar cases.21,22 Such patients have a poorer prognosis than people with DILI caused by conventional medicines, and they have higher rates of liver transplantation.1,7,23 A larger proportion of patients with supplement‐related DILI in our study met Hy’s law criteria (93%) than of patients with DILI of other aetiology, reflecting the greater severity of liver injury. However, we found no significant difference in transplant‐free survival between cases in which supplements were implicated and those involving other non‐paracetamol medications, perhaps because the numbers of patients were relatively small. Further, we found no difference in survival between cases of paracetamol‐related DILI and those of non‐paracetamol DILI in which herbal and dietary supplements were not implicated.

Our findings have several important clinical implications. First, paracetamol‐related DILI remains a problem and public health measures, including further reductions of pack sizes, should be considered.5

Second, the rise in the proportion of non‐paracetamol DILI cases in which herbal and dietary supplements were implicated reflects the rise in supplement use in Australia over the past two decades. During 1993–2007, the prevalence of complementary medicines use increased from 49% to 70%; many people use them without knowing the evidence (or lack thereof) for their therapeutic claims.20 The lack of regulatory oversight in the preparation and marketing of herbal and dietary supplements has attracted criticism.1,24 In Australia, the Therapeutic Goods Administration (TGA) classifies them as “listed” (more than 12 000 lower risk products) or “registered” (about 200 higher risk products).20 However, overseas herbal and dietary supplements purchased online evade Australian regulatory oversight. While the TGA assesses the safety and quality of the ingredients of all supplements, only high risk medicines are assessed for efficacy. The post‐marketing surveillance of adverse reactions to medicines required by the TGA is critical to maintaining safe use. However, reporting adverse reactions is voluntary, relying on the diligence of physicians and pharmacists.25 Although the regulation of herbal and dietary supplements has improved, it remains imperfect.

Third, community education is important. Australia has a culturally diverse population, and this is reflected by its use of herbal and dietary supplements.20 About half of the patients in our study with supplement‐related DILI had non‐European ethnic backgrounds, compared with fewer than 20% of patients with non‐paracetamol DILI caused by other medications. Rates of herbal and dietary supplement use are higher in Asia, Africa, and Latin America (as high as 80%) than in Australia, the United States, or Europe,22 but cases of acute liver failure secondary to DILI are less frequent in these areas than those caused by acute viral hepatitis (types A, B, E). Migrants transport their cultural beliefs and traditions about supplement use to their new homes, contributing to the their rising use in Western countries.20,22 Culturally and linguistically diverse communities should therefore be targeted for appropriate education about the potential dangers of herbal and dietary supplements.

First, the retrospective nature of our study means our conclusions rely on the accuracy and completeness of the data we analysed. However, RUCAM assessments indicated at least “probable” causality for the drugs implicated in 84% of cases of non‐paracetamol DILI without re‐challenging. Our study design was the most feasible for assessing DILI patterns over a 12‐year period. Further, all collected data were independently verified by two investigators, and hard endpoints were chosen as study outcomes to minimise subjectivity. Second, we examined data for patients hospitalised with DILI at a single quaternary referral centre, skewing our sample toward more severe DILI, and our findings may not be generalisable to the community or to non‐transplantation medical centres. Nonetheless, changes over time were similar to those reported by national DILI registries overseas.5,6,7,19 Finally, our patient sample was relatively small, limiting our ability to detect statistically significant differences. Larger DILI databases are needed. The Australian Drug Induced Liver Injury Network (AusDILIN) was established in 2020, and currently links 16 tertiary referral hospitals across Australia; it facilitates the prospective entry of non‐paracetamol DILI cases into a database for research purposes and to provide regular feedback on their incidence and prevalence.

The number of people hospitalised in our Sydney liver transplant referral centre with DILI caused by herbal and dietary supplements increased during 2009–2020. Ninety‐day transplant‐free survival for patients with non‐paracetamol DILI, especially cases caused by supplements, was poorer than for people hospitalised with paracetamol‐related DILI. Further, survival was poorer for patients with higher MELD scores, irrespective of the medication implicated. DILI remains an important clinical problem that requires more investigation, regulatory changes for the substances involved, and patient and community education. 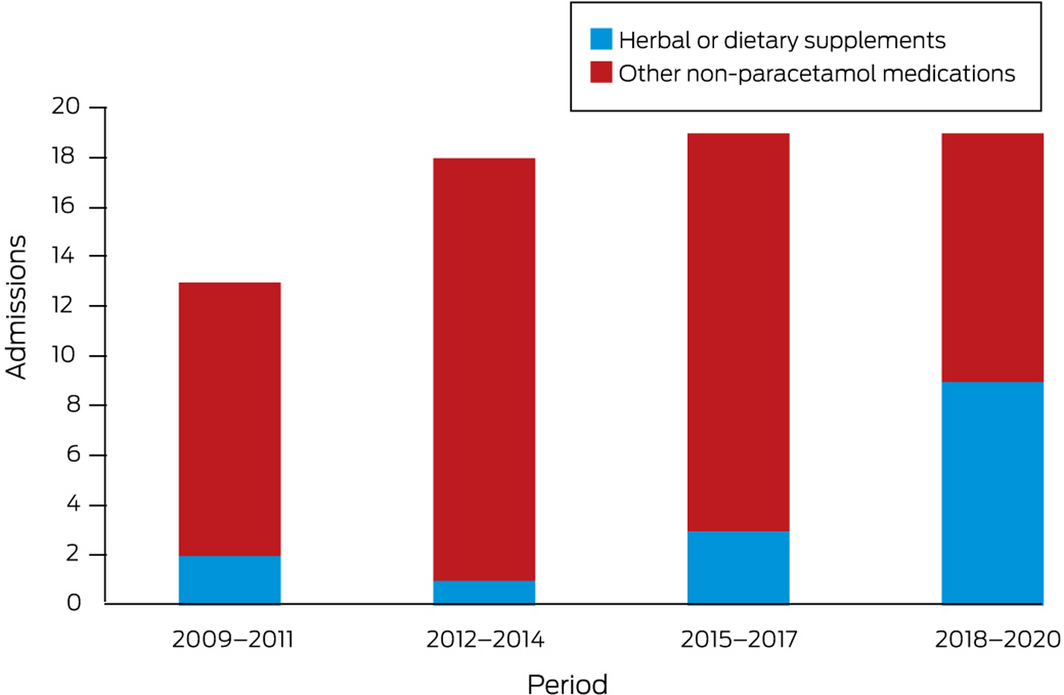