Objective: To examine relationships between changing general practitioner after entering residential aged care and overall medicines prescribing (including polypharmacy) and that of psychotropic medicines in particular.

Setting, participants: 45 and Up Study participants in New South Wales with dementia who were PBS concession card holders and entered permanent residential aged care during January 2010 ‒ June 2014 and were alive six months after entry.

Main outcome measures: Inverse probability of treatment‐weighted numbers of medicines dispensed to residents and proportions of residents dispensed antipsychotics, benzodiazepines, and antidepressants in the six months after residential care entry, by most frequent residential care GP category: usual (same as during two years preceding entry), known (another GP, but known to the resident), or new GP.

Conclusions: Increases in medicine use and rates of psychotropic dispensing were higher for people with dementia who changed GP when they entered residential care. Facilitating continuity of GP care for new residents and more structured transfer of GP care may prevent potentially inappropriate initiation of psychotropic medicines.

The known: People with dementia in residential aged care are frequently prescribed psychotropic medicines, but significant benefit from such treatment is often unlikely.

The new: On entering residential care, the GPs for 72% of people with dementia changed; 44% were attended by GPs previously unknown to them. Polypharmacy and psychotropic medicine initiation were more common for these people than for other aged care residents.

The implications: A change of regular GP when entering residential care is an important factor in psychotropic medicine initiation. Better organisation of GP care handover and facilitating continuity of care could prevent potentially inappropriate psychotropic prescribing for aged care residents.

Aged care systems around the world are under pressure because of ageing populations and the increasing prevalence of dementia. Systemic weaknesses have been widely recognised,1,2 and inappropriate medicine use was among the problems scrutinised by the Australian Royal Commission into the Quality and Safety of Aged Care, particularly the use of antipsychotics and sedatives as chemical restraints.2,3 Polypharmacy is common in residential aged care,4,5 as is potentially inappropriate prescribing.4,6 In Australian aged care facilities, psychotropic medicines (antipsychotics, benzodiazepines, antidepressants) are often dispensed to people with dementia,7 especially soon after entry into residential care, a critical transition point.8

Changed prescribing for people entering residential care may reflect events that precipitated their entry or their adjustment to their new surroundings.9 For example, antipsychotic medicines can be indicated for treating the behavioural and psychological symptoms of dementia, including hallucinations and agitation.3 However, given the risk of adverse events (including stroke and death),10 it is recommended that such treatment be of short duration3 and that non‐pharmacological approaches, such as behavioural management therapy, be preferred. Despite efforts to reduce prescribing of antipsychotics,11,12 rates remain high in residential aged care.8

One potential major adjustment for people during the transition to residential care is a change in general practitioner.13 GPs are the major prescribers in Australian residential aged care,14 but little is known about how many residents change GPs when they enter aged care facilities, or the effect this has on their care. For people with dementia, a new environment can be distressing, and the impact can be exacerbated by having an unfamiliar GP. Assuming care of a new patient with dementia can be difficult for GPs because of communication barriers and lack of familiarity with the patient and the reasons for their admission. The Royal Commission noted that restraining patients, including pharmacologically, arises from a “lack of knowing the person as an individual person.”2

The importance for high quality primary care of maintaining a continuous patient–GP relationship is widely recognised.15 However, the Australian Medical Association has recently highlighted concern among Australian GPs regarding their ability to support patients when they enter residential care.15 While the number of GP consultations in residential aged care has increased,16 more than one‐third of GPs have reported that they intended to reduce their number of visits.15

We explored GP continuity for people with dementia entering residential care and how it influences their medicine use, examining associations with both overall prescribing (including polypharmacy) and that of psychotropic medicines in particular.

Our retrospective data linkage study was part of the Exploring the relationship between Social care, primary and secondary Health service use and adverse health OUTcomes (SHOut) project. We analysed data from the Sax Institute 45 and Up Study17 for a prospective cohort of 267 153 New South Wales people aged 45 years or more, randomly selected from the Services Australia enrolment database and recruited during 1 January 2006 – 31 December 2009. Participants joined the study by completing a questionnaire and providing written consent to long term linkage of their data with administrative health datasets (online Supporting Information).

We included 45 and Up participants with diagnoses of dementia who entered permanent residential aged care during 1 January 2010 ‒ 30 June 2014 and were alive six months after entry, who had been dispensed medications during the preceding two years only as concessional beneficiaries, and for whom at least three GP claims had been lodged prior to entry and at least one after entry into residential care. People with dementia were identified using previously described criteria:18 any claim for dementia‐specific medications (donepezil, rivastigmine, galantamine, memantine), or dementia diagnosis codes in hospitalisation records, aged care assessments, or the Aged Care Funding Instrument (used to assess required level of care) between July 2006 and entry into permanent residential care.

We counted the number of unique medicines dispensed during the six months before and the six months after entry into residential care, by seven‐digit World Health Organization anatomical therapeutic classification (ATC)19 groupings (chemical substances). Cumulative polypharmacy was defined as five or more20 and cumulative hyperpolypharmacy as ten or more concomitantly prescribed medicines. Psychotropic medicines were grouped as in similar investigations:8 antipsychotics (ATC codes N05A*, excluding prochlorperazine and lithium), benzodiazepines (N05BA*, N05CD*, N05CF*, N03AE*), and antidepressants (N06A*). Initiation was defined as new dispensing of a drug to a resident who had not been prescribed the drug during the preceding two years.

Socio‐demographic factors, self‐reported health conditions, risk factors, and other health care utilisation characteristics that might confound the relationship between GP category and medicine use were included as covariates (Supporting Information, table 2).

Characteristics of residents by GP category are summarised as descriptive statistics. Multinomial propensity scores were calculated by generalised boosted regression, including all measured covariates in the model. The inverse of the propensity score provides an inverse probability of treatment (IPT) weight for balancing covariates across groups.

We conducted all weighted analyses in the survey package21 for R 4.0.2020 (R Project for Statistical Computing).

The 45 and Up Study was approved by the University of New South Wales Human Research Ethics Committee (HC 15408). The SHOut study (including data linkage) was approved by the human research ethics committees of NSW Population and Health Services (HREC/15/CIPHS/57), the Aboriginal Health and Medical Research Council of NSW (1172/16), the Department of Veterans’ Affairs (E017/011), and the Australian Institute of Health and Welfare (EO2016/2/254).

After applying IPT weighting, reasonable balance was achieved across groups (indicated by a standardised mean difference of less than 0.1), with the exception of prior emergency hospitalisation and number of hospital days (Supporting Information, table 4). As these two variables were highly correlated, only the variable with the greatest imbalance (prior emergency hospitalisation) was included in our models.

We found that most people with dementia changed GPs when they entered residential care: 44% to previously unfamiliar GPs, and 29% to GPs known to them but not their usual GPs. There are no national data with which to directly compare our estimates, but an earlier study in South Australia similarly found that 62‒76% of patients discharged from hospital to residential aged care facilities changed GPs.24 A recent Canadian study found that only 12% of new long term care residents saw their rostered family physician in the first six months after entry,25 a smaller proportion than in our study (28%).

Residents seeing new GPs were dispensed more medicines, including antipsychotics and benzodiazepines than other new residents with dementia, the increase in dispensing after entering residential care was greater for these people, and the proportion subject to polypharmacy was larger. New GPs may appropriately initiate new treatments in response to recent changes in a patient’s needs or a differing view of these needs. Polypharmacy in older people can be appropriate, but it also increases the risks of medication errors and hazardous interactions.26 The expected benefits of antipsychotics and benzodiazepines for older people with dementia are small and the risk of adverse effects is high, prompting recommendations to first try non‐pharmacological alternatives.3

Prescribing could be reduced by recognising the difficulties faced by GPs caring for new patients in residential care. Better support could be provided by promoting continuity of care or more structured handover of GP care, such as multidisciplinary care planning during residential care entry, including geriatrician and medication reviews. The Royal Commission into the Quality and Safety of Aged Care noted that remuneration for GPs attending people in residential care is unsatisfactory, providing no incentive to take the time to adequately assess patients.2 While it may be impractical for GPs to continue caring for all their patients who enter residential care, removing financial and administrative barriers, as highlighted by the Australian Medical Association,15 may assist continuity of care. However, proposals to promote GP specialisation and accreditation in aged care may further fragment GP care.27

The major strengths of our study were the large sample size and our adjusting for a wide range of socio‐demographic and health factors. Our study was observational, and causal inferences can therefore not be drawn, but the use of IPT weighting strengthens the reliability of our conclusions.

We relied on administrative data for identifying people with dementia, GP care, and medicine use, but we have previously found that drawing on multiple administrative datasets detects most people with dementia in a population sample.18 We will have underestimated usual provider care by assessing MBS claims if a GP used more than one provider number for the treatment of single patients; this is unlikely, and, in any case, misclassification would probably reduce differences between groups. A pharmaceutical dispensing claim does not necessarily indicate that a dispensed medicine was taken. However, for most residents there were multiple claims, and our findings were not markedly affected by restricting analysis to drugs for which there were two or more claims, suggesting active use of the medicine. We had no information about clinical indications for prescribing, and it therefore was not possible to determine its appropriateness for individual residents. We limited our study to people who lived in residential care for at least six months to allow adequate assessment of GP patterns, but this limitation also avoided confounding by end‐of‐life prescribing patterns. Finally, we did not have access to residential aged care facility identifiers, and had only limited information about GP and care facility characteristics that influence prescribing patterns, such as the GP care model.

Medicine use increases to a greater degree and psychotropic drugs are dispensed at higher rates for people with dementia who change GP when they enter residential aged care than for people who continue seeing their regular GP. Facilitating GP continuity of care and better supporting GP handover processes could help prevent potentially inappropriate initiation of psychotropic medicines. 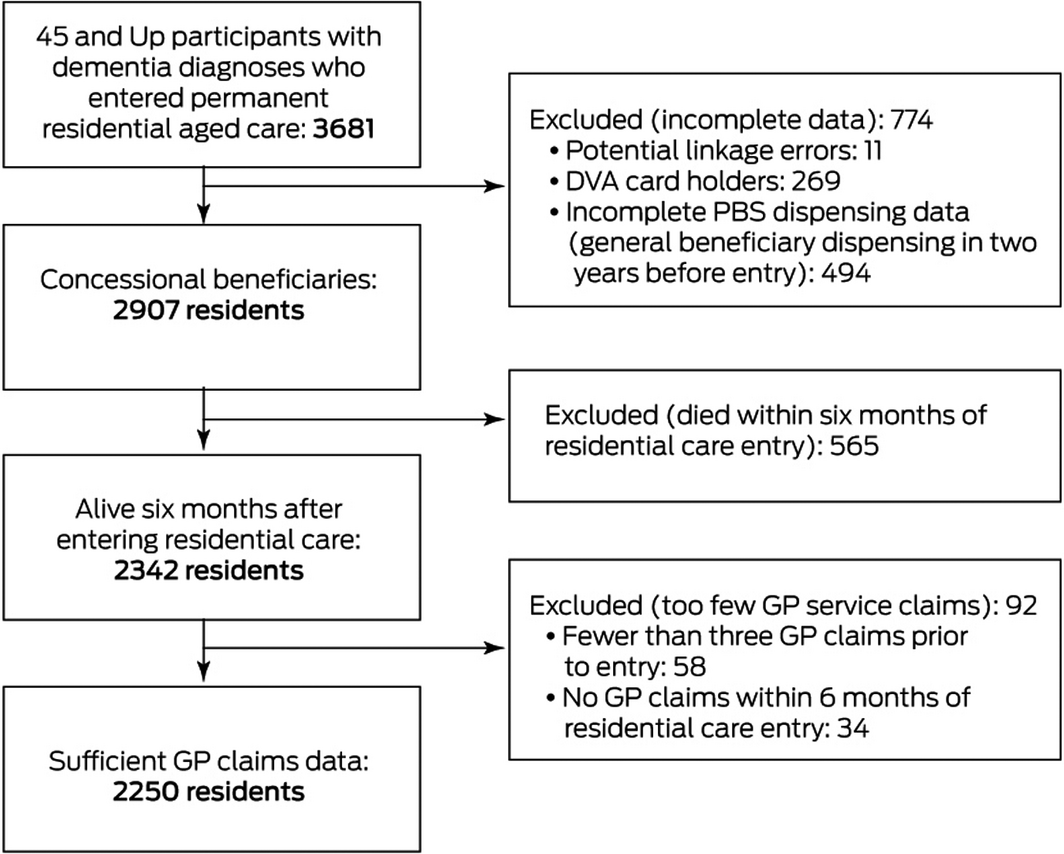 Box 3 – Numbers of medicines dispensed per person before and after entry into residential aged care, by residential care general practitioner category*

* Mean values are inverse probability of treatment‐weighted to balance the differences in covariates between general practitioner categories (Supporting Information, table 3). 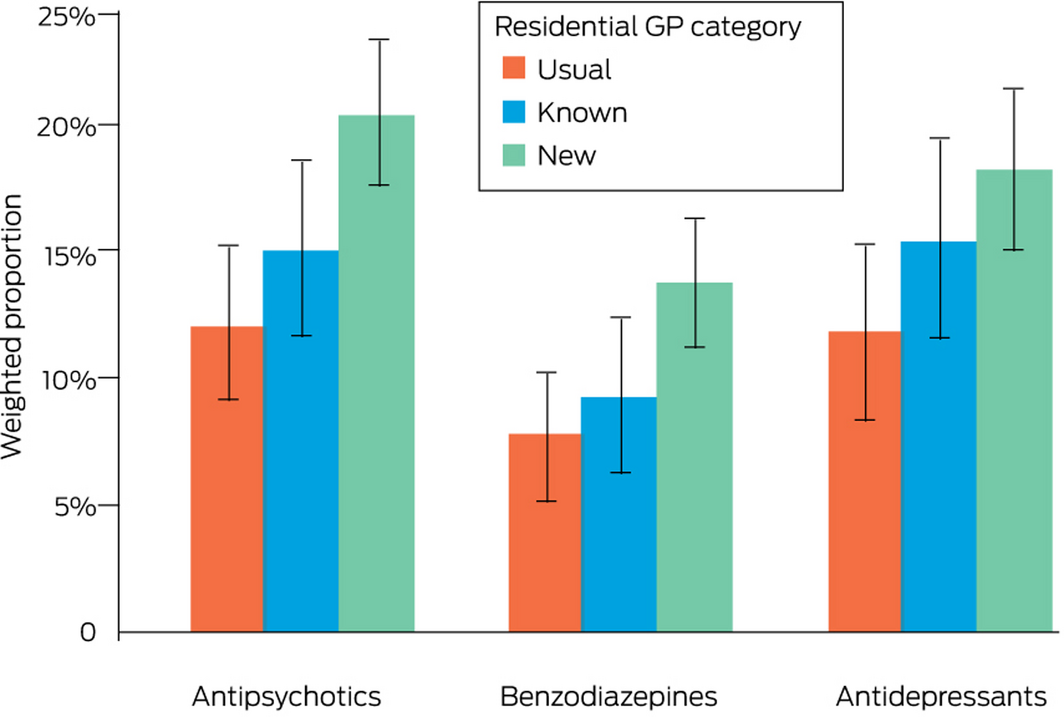 * At least one instance of dispensing to a resident for whom the medication type had not been prescribed during the two years preceding entry into residential care; proportions weighted by inverse probability of treatment based on differences in covariates between general practitioner categories (Supporting Information, table 3).

Heidi Welberry was supported by an Australian Government Research Training Program scholarship and a PhD top‐up through the Maintain Your Brain NHMRC Boosting Dementia Research program (1095097).