A guide to the management of atrial fibrillation in Santa Claus

Atrial fibrillation (AF) is the most common cardiac rhythm disturbance in the world, with a lifetime risk estimate of 1 in 3.1 Unlike other prominent world figures, Santa Claus’ medical background is strictly confidential and not explicitly stated in the medical literature. However, it seems highly probable that, given his advanced age and risk factors, he will one day present with new onset AF. Despite this pressing issue, guidelines on the management of AF in Santa Claus are lacking: we performed a search on PubMed of “Santa Claus” AND “atrial fibrillation” on 25 December 2020 and found no results. To aid fellow clinicians, we have developed a guide on this topic, underpinned by the latest North Pole Institute for Christmas Excellence (NICE), Elvish Society of Christmas (ESC), and Nativity, Holidays and Festivities Association (NHFA) guidelines.2,3,4 For simplicity, we propose the following mnemonic: SANTA CLAUS (Box). This stands for: Screen for atrial fibrillation; Anticoagulate; Normalise heart rate; Treat comorbidities; Anti‐arrhythmic drugs; Cardioversion; Lifestyle measures; Ablation treatment; Understand emotional and psychological impact; Save Santa Claus.

Understandably, Santa Claus is a busy individual who may not have the time for regular medical check‐ups. As opportunistic AF screening is known to be a cost‐effective strategy in older people,5 we suggest that the heads of state of each country designate one household every year to leave out a hand‐held ECG monitor alongside any food and drink on Christmas Eve, with centralisation of results. We don’t want to be Scrooge, but there is a risk of overdiagnosis.5 Bah humbug.

If a new diagnosis of AF is made in Santa Claus, all health care professionals’ thoughts should first be focused on stroke risk reduction. We estimate Santa Claus’ CHA₂DS₂‐VASc score to be 2, given his age of about 1750 years old.6 This would confer an estimated stroke risk of 2.2% per year.7 Although the CHA₂DS₂‐VASc score has not been validated in patients of this age, it can be presumed that his stroke risk cannot feasibly be any lower, and may certainly be higher. The first line choice of treatment in Santa Claus is a NOel AntiCoagulant (NOAC), in particular Apixieban due to its wide availability in the North Pole as a result of frequent use in elves. Warfarin is contraindicated due to its pharmacological interaction with Brussels sprouts8 and cranberry sauce.9 Bleeding risk can be estimated using the ChristmHAS‐BLED score.3

To improve symptom burden, rate control should be the next step in the management of AF in Santa Claus. Beta‐blockers and non‐dihydropyridine calcium channel blockers (eg, verapamil and diltiazem) are preferred over digoxin because of their greater effectiveness at high sympathetic tone. Indeed, Santa Claus has several risk factors leading to a propensity to tachycardia and increased sympathetic drive. These include commonly getting stuck in the chimney,10 either anterograde or retrograde, frequently kissing children’s mummies,11 and his insistence on wearing an ill‐considered fur‐lined red suit despite the highly variable climes in which he works,12 ranging from the snowy wilderness of Siberia, to the blistering heat of an Australian beach on Christmas Day. A resting heart rate of less than 110 beats per minute should be the initial target of therapy.13

Comorbidities such as hypertension and type 2 diabetes mellitus are known to contribute towards the development and the perpetuation of AF,14,15 and given Santa Claus’ epicurean food and alcohol intake, it is highly likely he may suffer from both. As such, physicians overseeing the management of AF in Santa Claus should be familiar with the general management of these conditions. The recommended first‐line drug therapy for type 2 diabetes mellitus in Santa Claus is Metformincepie. If glycated haemoglobin response is suboptimal, second‐line agents include Linagliptinsel and Santagliflozin. For hypertension management, recommended antihypertensive therapy includes Candysartan, Stollenolactone, and Aten‐lordsaleaping‐olol. In the event of a hypertensive crisis requiring hospital admission, intravenous O Holy Nightroprusside can be considered.

If rate control does not result in symptomatic improvement, anti‐arrhythmic drug therapy should be considered, particularly if it is nearing Christmas and other rhythm control strategies (such as elective electrical cardioversion and catheter ablation) are more difficult to organise at short notice during the festive period. We don’t want to make Santa late, as that could prompt a referral to the Gingerbread Men Council (GMC).

Once adequately anticoagulated (a minimum duration of two cycles of the Twelve Days of Christmas), electrical cardioversion can be considered if Santa Claus’ AF persists. When performing electrical cardioversion, care should be taken to ensure that the machine is synchronised to recognise the peak of Santa Claus’ QRS complex on electrocardiographic monitoring, in order to prevent the delivery of a shock on a T wave, as this can precipitate ventricular fibrillation (a phenomenon known as QRS‐T‐mas induced ventricular arrhythmia). Christmassy AF is one thing, Christmassy VF is quite another.

In view of Santa Claus’ raised body mass index (40.2 kg/m2),16 his likelihood of obstructive sleep apnoea is significant. The prevalence of undiagnosed obstructive sleep apnoea in patients with AF is high, and treatment of the condition is thought to improve AF control.17 Weight loss,18 cardiac rehabilitation,19 and continuous positive airway pressure devices should be strongly considered in the management of AF in Santa Claus, although data from randomised controlled trials are absent. Although given that Santa Claus must travel at 1.56 × 106 metres/second,20 in an open‐topped wooden sleigh, one presumes dosage of continuous positive airway pressure at that speed will not be insignificant. Imagine sticking your head out of a car travelling at 0.5% of the speed of light. Less ho ho ho, more woah woah WOAH.

If there is failure of response or intolerance to at least one class I or III antiarrhythmic drug, AF catheter ablation for pulmonary vein isolation is recommended to improve symptoms of AF recurrences. This is usually performed with catheters with more than a north and south pole, something Santa Claus may find disturbing.

One must not overlook the considerable impact of AF on Santa Claus’ quality of life, compared with other saints, due to frequent paroxysms with a fast ventricular response. The Eggnog, Holly and Reindeer Association (EHRA3) score from I (no symptoms) to IV (disabling symptoms) can be used to calculate the severity of symptoms and the impact on daily activity.

The morbidity and mortality associated with AF are significant. The adequate management of AF in Santa Claus is pivotal to the successful delivery of presents to 2.2 billion children each Christmas. After all, he’s making a list, he’s checking it twice and he’s gonna find out who’s naughty or followed NICE guidelines.2 So be good for goodness’ sake! 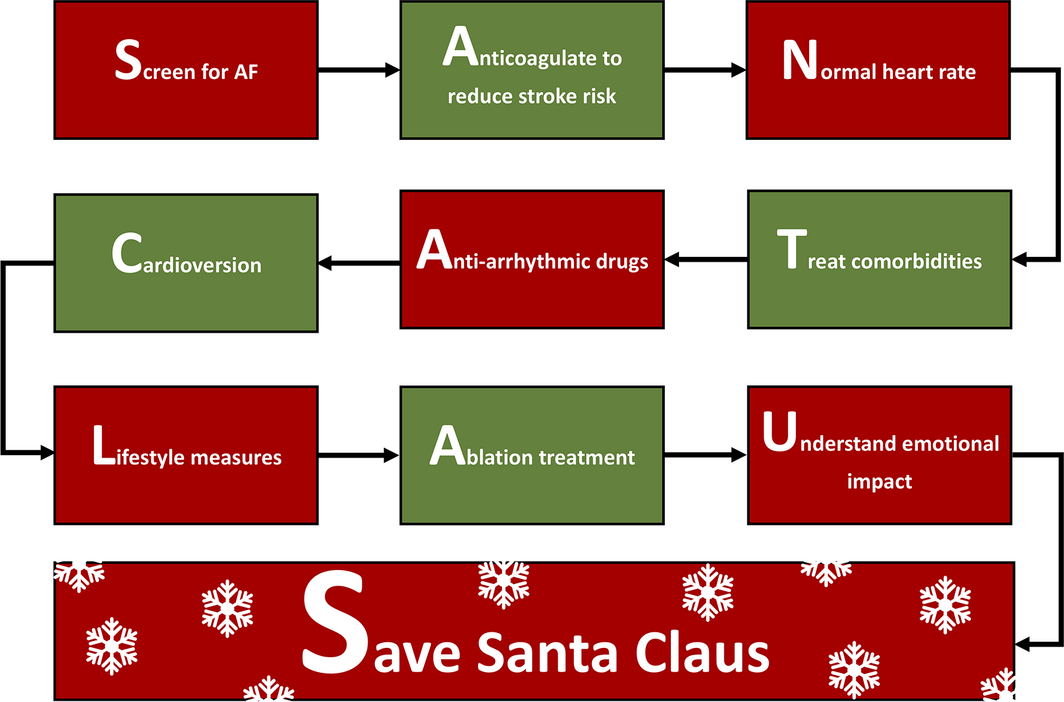 The guidance provided in this article is inspired by the National Institute for Health and Care Excellence (NICE),2 the European Society of Cardiology (ESC),3 and the National Heart Foundation of Australia and Cardiac Society of Australia and New Zealand (NHFA)4 guidelines. Our advice applies only to the management of atrial fibrillation (AF) in Santa Claus, and should not be used in other individuals with AF. Important areas of AF management not covered in our guidance include the prevention of AF, left atrial appendage occlusion for stroke prevention, and the surgical treatment of AF in Santa Claus.

No patients or public were asked for input in the creation of this article, but we did send a copy to Santa Claus along with our Christmas list for 2021.