Late mortality in people with cancer: a population‐based Australian study

Objectives: To investigate causes of death of people with cancer alive five years after diagnosis, and to compare mortality rates for this group with those of the general population.

Design, setting, participants: Retrospective cohort study; analysis of South Australian Cancer Registry data for all people diagnosed with cancer during 1990–1999 and alive five years after diagnosis, with follow‐up to 31 December 2016.

Conclusions: Mortality among people with cancer who are alive at least five years after diagnosis was higher than for the general population, particularly cardiovascular disease‐related mortality. Survivorship care should include early recognition and management of risk factors for cardiovascular disease.

The known: Data on late mortality in people with cancer, and the relative contributions of cancer and non‐cancer causes to mortality, are limited.

Advances in the diagnosis and treatment of cancer have increased the number of cancer survivors, many of whom have comorbid chronic conditions.1,2,3 Cancer and its treatment can exacerbate existing conditions and lead to new ones and competing mortality.4,5 In order to develop better models of care, it is important to understand the relative contribution of comorbidity to mortality, especially for long term survivors, whose survival ideally should approximate that of people without cancer.

Few studies have compared the relative contributions of cancer and non‐cancer causes to mortality among people with cancer. In 2016, a study of death records from the United States Surveillance, Epidemiology and End Results (SEER) database indicated that the comparative risks of cancer and non‐cancer death differed markedly by cancer type, and that more than 40% of non‐cancer deaths were from cardiovascular disease.6 In Australia, an analysis of 1946 non‐cancer deaths among 21 000 people with cancer found cardiovascular disease to be the most frequent cause of death, and that the standardised mortality ratio (SMR) for cardiovascular disease was higher than for people without cancer.7 Both studies found that SMRs were highest during the first year after diagnosis, probably reflecting the toxicity of anti‐cancer treatment. In the Korean national cancer registry study, including nearly 3 million patients, 87% of the more than one million deaths were attributable to cancer, but cardiovascular disease increased 20‐fold during 2000–2016 and the risk of suicide was higher than in the general population.8

These three studies raised awareness of competing causes of death among people with cancer. However, their inclusion of both early and later deaths made interpretation of their findings difficult. Acute treatment toxicity, rather than cancer itself, can contribute to early death, which may be attributed to cancer rather than organ failure. Patients with a comorbid condition may not be offered the most effective cancer treatment, leading to selection bias. Further, cancer‐specific mortality for these patients may be higher because of less effective treatment, and they may be at greater risk of treatment toxicity and death because of their comorbid conditions.

Only one population‐level study in the past 20 years has examined late mortality in adults with cancer, a Korean analysis of national cancer registry data (including 26 498 deaths). It found that the SMR for patients alive five years after diagnosis (median follow‐up, 7.9 years) was 2.56; higher mortality was primarily driven by cancer‐related deaths, but 24% of deaths were from causes other than cancer.9 The risks of non‐cancer death (except for suicide) were lower than for the general population, and the cardiovascular death rate was similar to that for the general population.

No other studies of late mortality have included adult patients with cancers of diverse tumour types. We therefore examined the causes of death among South Australians with cancer alive five years after diagnosis, and to compare mortality rates for this group with those of the general population.

In our retrospective cohort study, we analysed data from the South Australian Cancer Registry (SACR). Data for all patients with invasive cancers diagnosed during 1 January 1990 – 31 December 1999 and alive five years after their index cancer diagnosis were included, with follow‐up data until death or 31 December 2016 (final censoring date), whichever occurred first.

The outcomes of interest were time and cause of death. International Classification of Diseases (ICD)‐9 codes were provided for deaths prior to 2007, and ICD‐10 codes for deaths from 2007. ICD‐9 codes were converted to ICD‐10 codes using the SEER program conversion tables.11 Given the small numbers in some categories, the 73 ICD cancer categories were collapsed to ten categories. Causes of death were classified according to World Health Organization recommendations.12

All‐cause and cancer‐specific mortality were calculated for each cancer group. Overall mortality and mortality by index cancer diagnosis topography were estimated in survival analyses. Patient study time was calculated from their index cancer diagnosis until death or 31 December 2016, whichever occurred first. The cumulative incidence function for mortality is reported, using a competing risks model to explore cancer cause‐specific mortality, adjusted for other causes of death. The cumulative incidence function applies an overall survival function that counts deaths from competing events as well as the event of interest, thereby reducing the risk of overestimating the probability of death from the event type of interest.13 The impact on survival (all‐cause and cancer cause‐specific mortality) of patients’ characteristics was examined in multivariable Cox regression models; adjusted hazard ratios are reported with 95% confidence intervals (CIs).

Overall mortality rates were compared with those for the SA population using standard cohort techniques.14,15 As the life table for SA was available only for 1995–2015,16,17,18 data for patients diagnosed during 1995–1999 (about half the study population) were used to compare overall all‐cause mortality with that of the SA population; the censoring date was accordingly set to 31 December 2015 for this analysis, and the number of person‐years at risk calculated from five years after first diagnosis to the censoring date. The 429 people in the 1995–2015 study subsample with multiple cancers (2.4%) were excluded from this analysis.

The SMR was defined as the ratio of deaths in the study group to the estimated number of deaths in the corresponding component of the general population, calculated from the number of person‐years at risk for each specific sex, 5‐year age group, and one‐year calendar period stratum and the corresponding population mortality rate. Cardiovascular disease was defined by the ICD‐10 codes I10–I15, I20–I25, I26–I28, I34–I38, I42, I47–I49, I50–I51, I60–I71.

Our investigation was approved by the Human Research Ethics Committee of the South Australian Department for Health and Wellbeing (reference, HREC/16/SAH/72).

In this large population‐based study, long term mortality among people with cancer and alive five years after diagnosis exceeded that for the general SA population, with cardiovascular disease a major competing cause of death.

The deaths of 4612 people with cancer and alive five years after diagnosis were attributed to cardiovascular diseases; that is, 26.7% of all deaths and 56.1% of non‐cancer deaths. These estimates are higher than those derived from a recent analysis of cardiovascular mortality data in the SEER database, in which 11% of all deaths and 43% of non‐cancer deaths were attributed to cardiovascular diseases,19 and those of the 2010 Korean study (7.5% of all deaths, 31% of non‐cancer deaths).9 Our finding is probably explained by our longer follow‐up and our inclusion of long term survivors and a smaller number of early cancer‐related deaths. We found that by 13 years after the index cancer diagnosis the cumulative number of cardiovascular deaths exceeded that of cancer cause‐specific deaths, underscoring the importance of longer follow‐up. Our findings are also consistent with the steady rise in cumulative cardiovascular mortality reported by an Australian study of early competing causes of death among patients with cancer.7

While the risks of cardiovascular disease in people with cancer have previously been reported, our study was unique in its focus on long term survivors and its longer follow‐up period. Our findings may partly reflect the high prevalence of and mortality from cardiovascular disease in Australia,20 but we also found that cardiovascular mortality was higher than in the general population, consistent with an earlier Australian study of non‐cancer mortality among people with cancer.21 Our findings suggest an interaction between cancer or its treatment and cardiovascular risk factors. The interaction may reflect a biological phenomenon (such as a direct toxic effect of anti‐cancer treatment on the heart or vascular system),22 or it may reflect lack of prioritisation of cardiovascular disease by patients, or health care focused on treating cancer.23 It is notable that cardiac failure was a relatively infrequent cause of death (2.2% of all deaths), suggesting that treatment toxicity, which tends to cause cardiac failure, may lead to earlier mortality, but that later mortality from cardiovascular disease is driven more by existing risk factors and background population risk. The relative contributions of these factors in patients with different cancer types should be further examined.

Death from cardiovascular disease annuls any benefits of anti‐cancer treatment, and identifying cancer survivors most at risk of cardiovascular disease is critical. Specific risk estimates have been reported for some cancers, such as Hodgkin disease,24 but not for other cancer types. Managing cardiovascular disease risk factors and providing interventions for the people at greatest risk (men, older people, Indigenous patients with cancer and comorbid conditions), for whom outcomes are inferior to those of other patient groups,25,26 should be prioritised. Treating comorbid conditions has recently been identified as an important component of survivorship care,27 but management of cardiovascular risk factors has not always been a routine part of cancer care; the emergence of cardio‐oncology may change this situation.28

The long follow‐up period and complete population data were strengths of our study. But it is possible that cancer had been incorrectly recorded as the cause of death for some people with histories of cancer, potentially leading to underestimation of non‐cancer causes of death. Further, the estimated mortality rates for the general population are based on data that also include people with cancer, leading to underestimation of the difference between mortality rates for people with and without cancer. We had no information about comorbid conditions or prior cancer treatment for patients, and therefore could not assess their impact on mortality and causality. These findings suggest that it would be useful to include data on these variables in the routine cancer registry dataset.

We found that mortality among long term cancer survivors exceeds that of the general population, with cardiovascular disease a major competing cause of death. Cancer control systems should incorporate monitoring of long term survivorship outcomes, including non‐cancer‐related mortality, and manage risk factors for premature death from non‐cancer causes.

Box 2 – All‐cause, cancer‐specific, and non‐cancer mortality (per 1000 person‐years) for people alive 5 years after being diagnosed with invasive cancer during 1990–1999 and followed until 31 December 2016, by index cancer diagnosis

Box 3 – All‐cause and cancer cause‐specific mortality for people alive 5 years after being diagnosed with invasive cancer during 1990–1999 and followed until 31 December 2016: Cox regression analyses 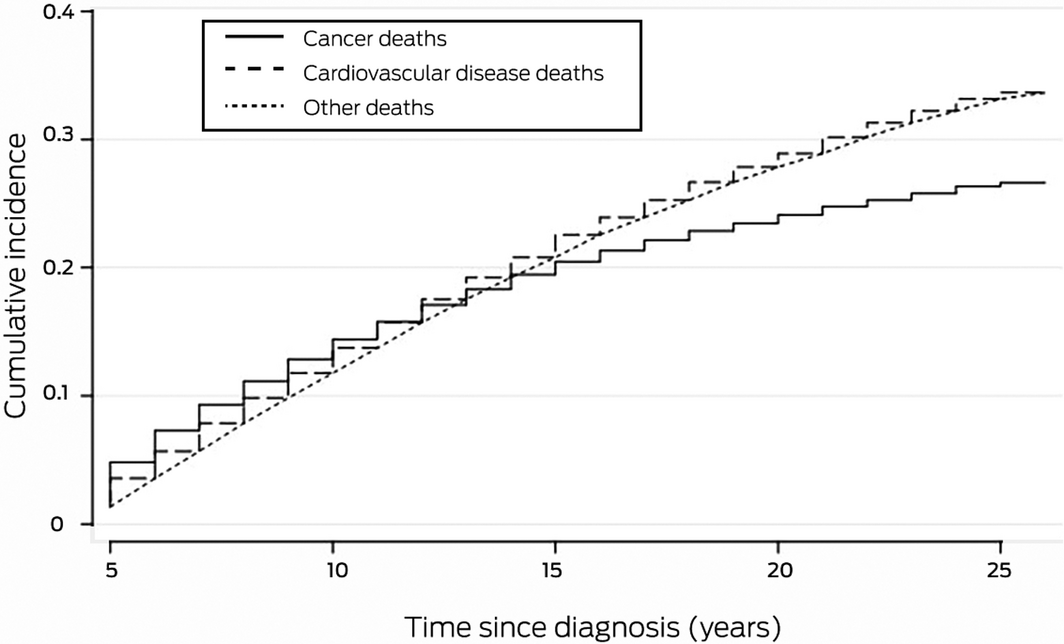