Participants: All singleton births in Australia of 23–42 completed weeks’ gestation and with spontaneous onset of labour, 2004–2013. Births initiated by obstetric intervention were excluded to minimise the influence of decisions to deliver small for gestational age babies before term.

Results: Gestational age, birthweight, sex, and labour onset data were available for 2 807 051 singleton live births; onset of labour was spontaneous for 1 582 137 births (56.4%). At pre‐term gestational ages, the 10th centile was higher than the corresponding centile in previous Australian birthweight charts based upon all births.

The known: Most population‐based birthweight centile charts are biased at pre‐term gestational ages because a disproportionate number of small for gestational age babies are delivered before term by obstetric intervention.

The new: We derived new birthweight charts, based upon the most recent available Australian population data for births with spontaneous onset of labour. Excluding deliveries by intervention minimised the influence of pre‐term small for gestational age babies on the definition of the threshold 10th centile.

The implications: Our new birthweight charts may facilitate more accurate diagnosis of small for gestational age babies and improve obstetric and neonatal care.

Centile curves of birthweight by gestational age are widely used in obstetric, paediatric and general medicine. During pregnancy, they are used to assess fetal growth and to screen for small and large fetuses at increased risk of antenatal and intrapartum complications; in the postnatal period, they are used to identify neonates at increased risk of complications such as hypoglycaemia and to assess their growth. The 10th centile, in particular, is often used to define small for gestational age (SGA) babies, who are at increased risk of perinatal complications and death.1,2 The exact centile cut‐offs therefore have important implications for diagnosis and management during the ante‐ and postnatal periods. Given the potential consequences of inaccurate birthweight charts, it is essential to review and update them to incorporate the most recent population data and methodology for constructing the charts.3,4

Birthweight charts can be descriptive (population‐based) or prescriptive (based on a restricted subset of “normal” pregnancies).5 They can also be derived from two different methods of measurement: ultrasound estimates of fetal weight in utero6,7 or birthweights recorded at birth.8 Each approach has limitations. Ultrasound estimates are subject to measurement error,9,10 while a descriptive chart based on actual birthweights from an unselected birth cohort will be skewed to lower birthweights for pre‐term babies (earlier than 37 weeks’ gestation) because a disproportionate number of infants born pre‐term are SGA.11,12 This bias may influence the diagnosis of intra‐uterine growth restriction in a pre‐term fetus, affecting the decision to expedite delivery and subsequent neonatal care.

Births can be classified as deliveries by intervention (in which the obstetric team has made a decision to intervene to end the pregnancy) or as spontaneous deliveries (in which labour has commenced without intervention). Removing the intervention group from birthweight‐based growth curves excludes a significant source of bias and leads to more accurate diagnosis of pre‐term SGA, better identifying infants at risk of stillbirth and neonatal problems.13

In our study, we applied this improvement in methodology to develop new birthweight‐based reference charts for Australian neonates, incorporating updated population data from the National Perinatal Data Collection.

Data were extracted from the Australian Institute of Health and Welfare (AIHW) National Perinatal Data Collection, a population‐based surveillance system for all births of at least 400 g birthweight or at least 20 weeks’ gestation.14 The National Perinatal Data Collection includes data on gestational age, birthweight, infant sex, and onset of labour for each birth. The onset of labour is described as “spontaneous”, “induced”, or “no labour”; for our analysis, the latter two categories were deemed to indicate delivery by intervention.

Our study population comprised all Australian liveborn singleton infants during the ten calendar years 2004–2013, the most recent 10‐year period for which National Perinatal Data Collection data were available. Perinatal data are collected by birth attendants and collated by the relevant state or territory health department. The estimated gestational age is based on the last menstrual period (if known), ultrasound earlier in the pregnancy, or clinical examination at birth if there was no prior antenatal care; the exact method of estimation, however, is not recorded in the database.

Given the paucity of data for shorter and longer gestations, we limited our analysis to infants with recorded gestation periods of 23–42 completed weeks, allowing construction of centile growth curves for 24+0 to 42+0 weeks’ gestation. Birthweights below 400 g or exceeding 6000 g were excluded from our analysis because of the dubious accuracy of such weights. Records with missing values for gestational age, onset of labour, or birth outcome, and for babies of indeterminate sex were also omitted.

Our analysis and reporting of results were informed by the STROBE guidelines.15

Statistical analysis was performed in SAS 9.4 for Windows. Centile curves for birthweight by gestation for each sex were prepared by quantile regression, as previously used for preparing growth curves,13,16 including the additional explanatory variable of labour onset (spontaneous, intervention). The statistical significance of the interaction between labour onset and gestational age was also determined. Polynomial functions of order 4 were fitted to the data, an approach we have previously validated.13 The centile curves were checked against raw centiles for additional validation.

In a sensitivity analysis, curves prepared after removing outliers with a modification of the Tukey method17 were compared with our main centile curves.

Our centile birthweight curves for singleton infants born to mothers in Australia after spontaneous labour onset are depicted in Box 3 and Box 4. The birthweights for selected centiles are listed in Box 5; more comprehensive tables are included in the online Supporting Information, file 2.

In a sensitivity analysis in which we recalculated the 10th, 50th, and 90th birthweight centiles after removing outliers (birthweight data points more than four times the interquartile range from the mean), the largest resulting difference was 10 g (data not shown).

To check for consistency across the 10‐year data period, we also divided the births into two 5‐year periods (2004–2008, 2009–2013) and calculated the 10th centile curve for each period. The 10th centile birthweights in the more recent group were slightly larger (1–2% for most gestational ages) (data not shown).

Comparison of our curves with previously published curves

The 10th centile curves for spontaneous and intervention births are compared in Box 6 with the 1991 ultrasound estimates by Hadlock and colleagues,6 an example of a widely used prescriptive fetal growth chart for a population of healthy pregnant women (that is, excluding pre‐term deliveries of SGA babies). Consistent with our previous report,13 we found that the birthweights of infants born pre‐term after obstetric intervention were generally lower than for spontaneous births, and that the curves for infants born following spontaneous labour approximated ultrasound‐based curves for a healthy population.

We report new birthweight charts based on data for spontaneous singleton births in Australia. By restricting our analysis to spontaneous births, our charts more closely reflect normal growth and delivery trajectories by excluding the impact on growth curves for pre‐term fetuses of the early delivery by intervention of SGA babies. Our curves will allow more accurate assessment of fetal growth in Australia than previous charts based on unselected populations, which tend to underdiagnose SGA in pre‐term fetuses. The potential magnitude of underdiagnosis of SGA is illustrated by the fact that only 3.0% of all spontaneous births of less than 34 weeks’ gestation in our study lay beneath the Dobbins 10th centile for birthweight,8 suggesting that a substantial proportion of SGA pre‐term fetuses are not recognised as such in Australia, where descriptive birthweight charts are commonly used.

Although the bias associated with obstetric intervention deliveries is most marked for the pre‐term period, we restricted our analysis of birthweight at all gestational ages to spontaneous births. This approach reduces potential bias at later gestational ages, such as that associated with term intervention deliveries of babies with suspected macrosomia. We also found that more complex analytic approaches (eg, including only spontaneous births up to an arbitrary gestational age limit, and all births thereafter) yielded very similar centile curves (data not shown).

It would be appropriate to test the effect of using our birthweight charts in clinical settings. Some fetuses previously regarded as “normal” will now be identified as SGA and may benefit from additional surveillance. More frequent diagnosis of SGA will increase the burden on health care, but may reduce the incidence of poor clinical outcomes for neonates.

With one notable exception,19 most published birthweight‐based growth charts have not taken the problem of pre‐term SGA bias into account. Ultrasound‐based charts, such as the Hadlock charts6 and those of the Fetal Growth Longitudinal Study,7 circumvent this problem, but at the cost of measurement error; further, they are limited to select population samples, introducing selection bias that does not affect population‐based birthweight charts.

Another approach is to construct prescriptive standardised charts based on birthweights for a cohort of women with low risk pregnancies, as in the INTERGROWTH‐21st project; however, the small number of early pre‐term births limited the value of the resulting curves to later gestational ages.20 Such standardised charts also inevitably include some pregnancies with fetal growth restrictions that result in obstetric intervention, as it is not possible to prospectively exclude all such pregnancies.

The major strength of our study was the size of the dataset, comprising more than 1.5 million spontaneous labour births and with few exclusions, thereby avoiding selection bias and producing robust estimates. The dataset is sufficiently large to allow confident estimation of birthweights for as early as 24 weeks’ gestation.13 Our centile curves are applicable across Australia, and possibly also in other multi‐ethnic populations with similar demographic features.

An additional strength was the use of quantile regression, which produces smoothed centile curves with no assumptions about the distribution of error terms, unlike traditional least squares regression.21 The method could be used to generate birthweight charts that are also adjusted for factors such as maternal height by including these variables in the regression models.

The major weakness of our analysis is that it depends on the accuracy of the included data, particularly information about onset of labour. The classification of labour is not always straightforward, and events such as artificial rupture of membranes or augmentation with oxytocin can obscure whether labour onset was ultimately spontaneous or induced. This uncertainty could bias our centile curves in either direction. National Perinatal Data Collection reporting could be improved in this regard by more reliably differentiating between induction of labour and interventions during spontaneous labour.

The impact of interventions for delivering large for gestational age (LGA) babies at term is more complex. Delivery by intervention of LGA fetuses at 38–40 weeks’ gestation probably pushes the 90th centile up, leading to underdiagnosis of LGA at gestations of this length. However, our 90th centile for spontaneous births may be low from 40 weeks, as the proportion of LGA fetuses that reach this gestational age is small. Comparison with cross‐sectional ultrasound‐based charts6,13 suggests that this bias is small (Box 6). Accurate diagnosis of LGA is becoming increasingly important as rates of maternal obesity and diabetes rise.26 Maternal health, nutrition, and ethnic background may also influence fetal weight, but data on these parameters were not available for our study.

Finally, we noted a small increase between 2004–2008 and 2009–2013 in the 10th centile birthweights at all gestational ages. We could not assess the significance of this result, nor whether it was linked with earlier interventions for delivering SGA fetuses, a change in population demographic characteristics, or another factor. However, it would be advisable to periodically recalculate and update centile curves using the most recent data available.

We have reported a new set of fetal birthweight charts that, in particular, allow improved diagnosis of SGA in Australia. Our methods could be applied to constructing growth charts for other populations for which the local obstetric database reliably differentiates between spontaneous deliveries and deliveries by intervention. 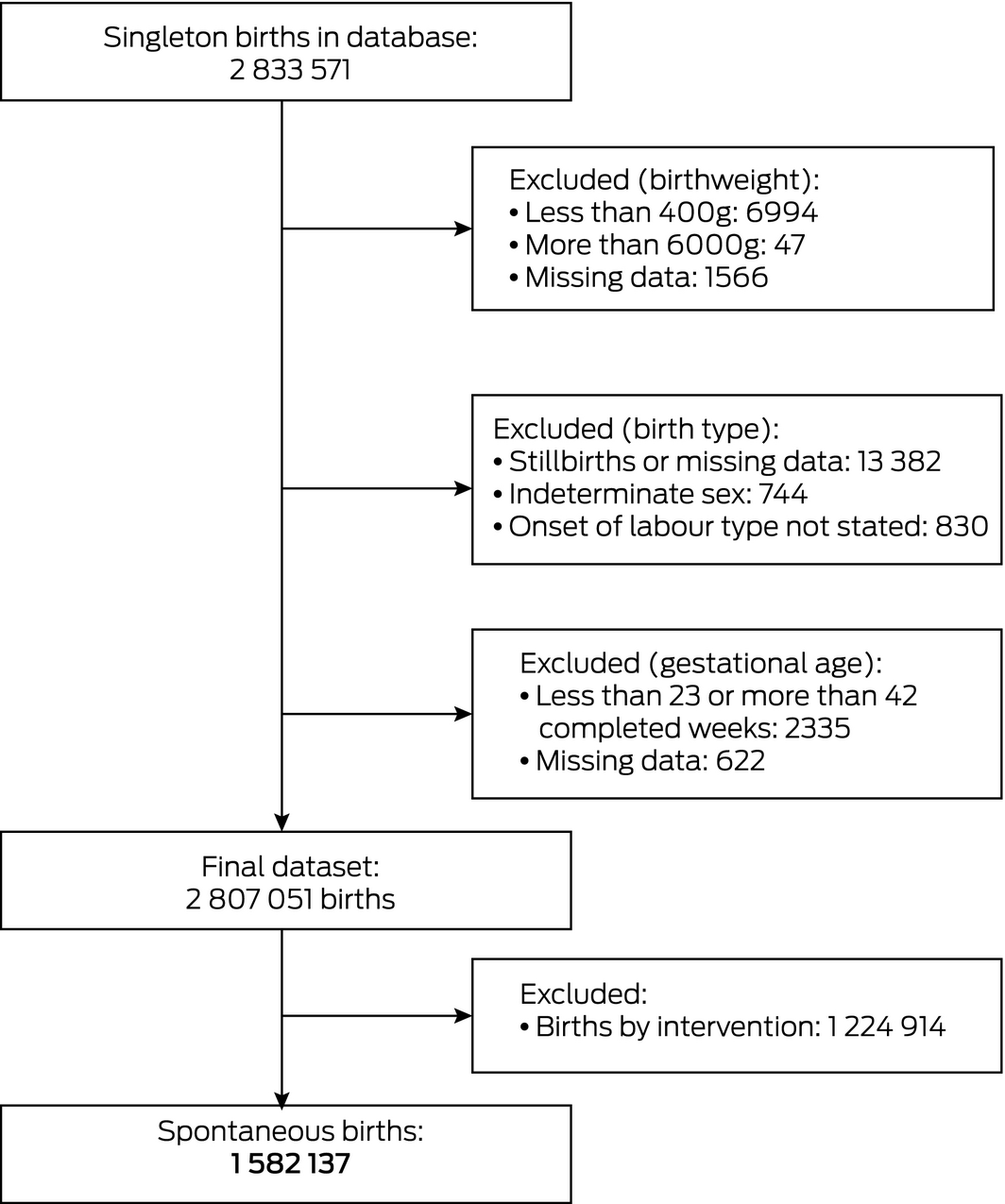 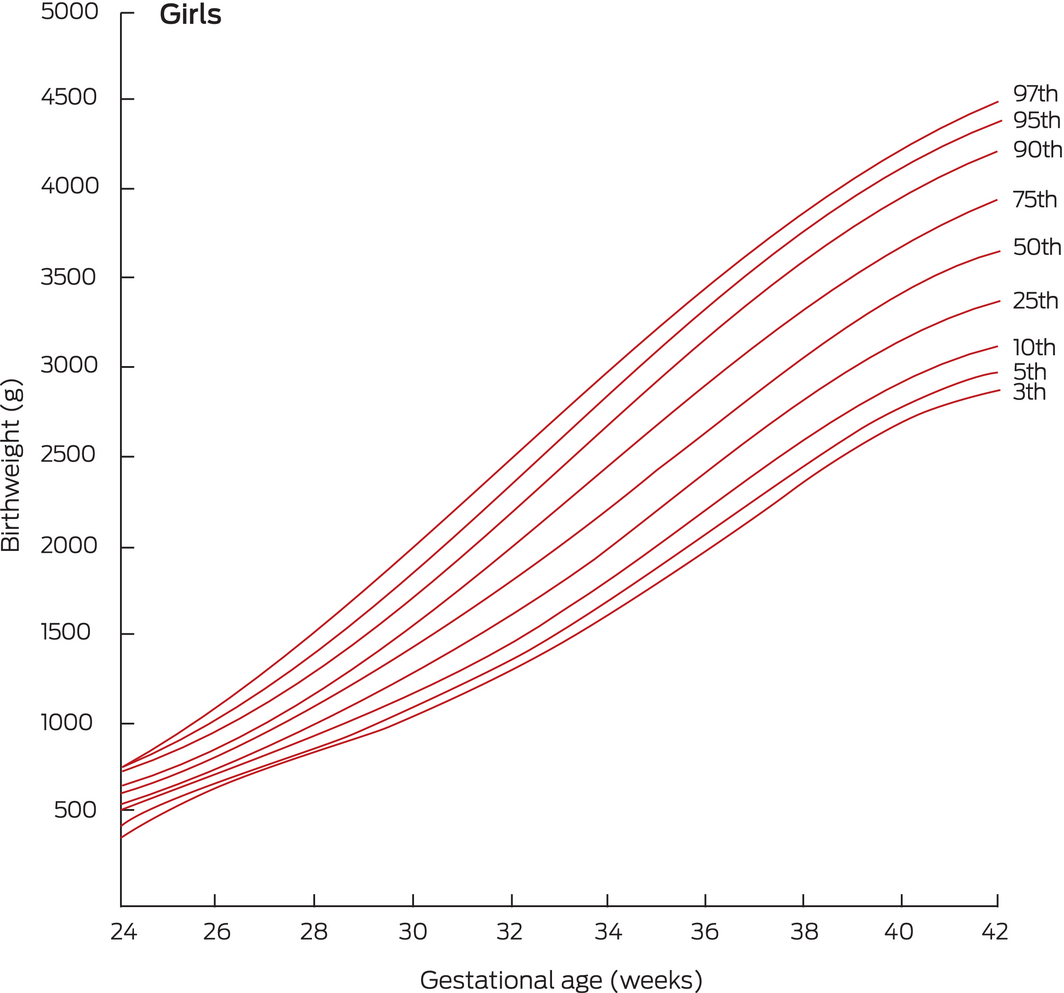 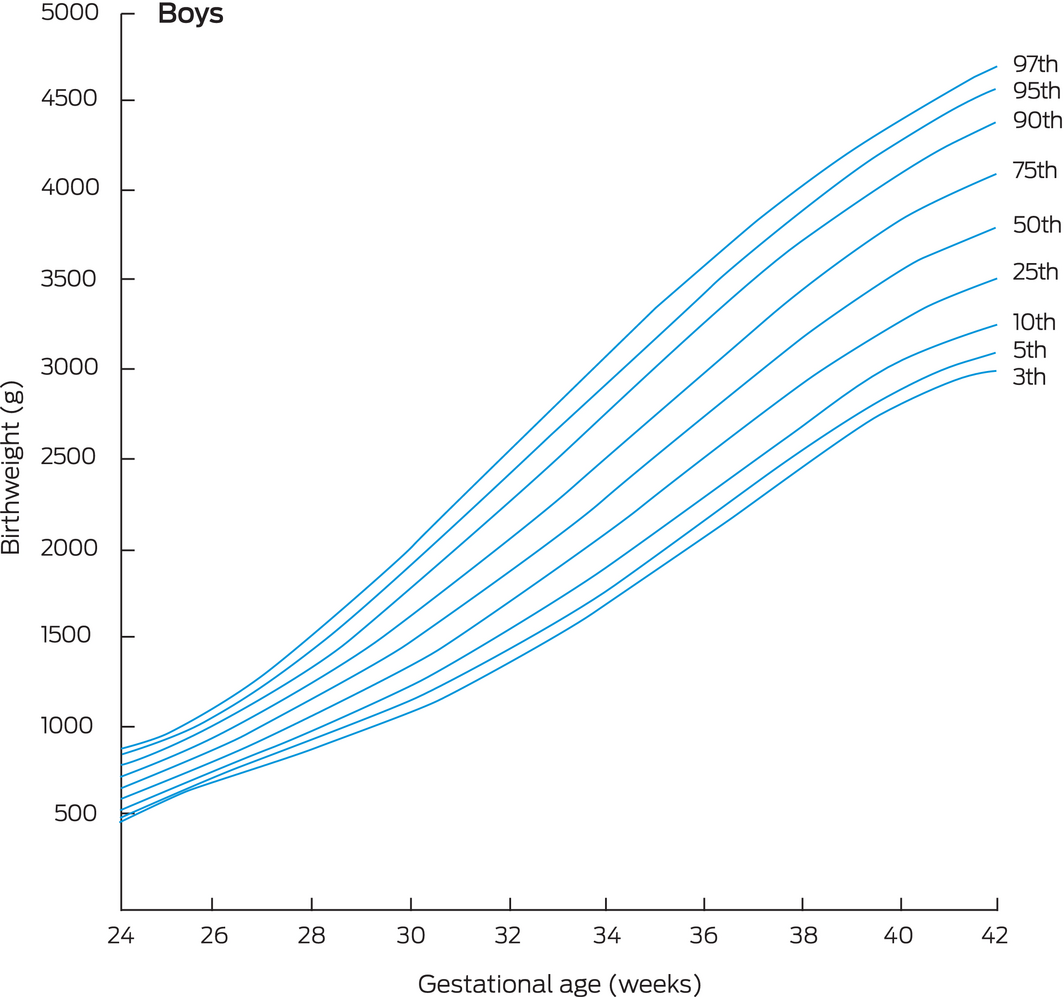 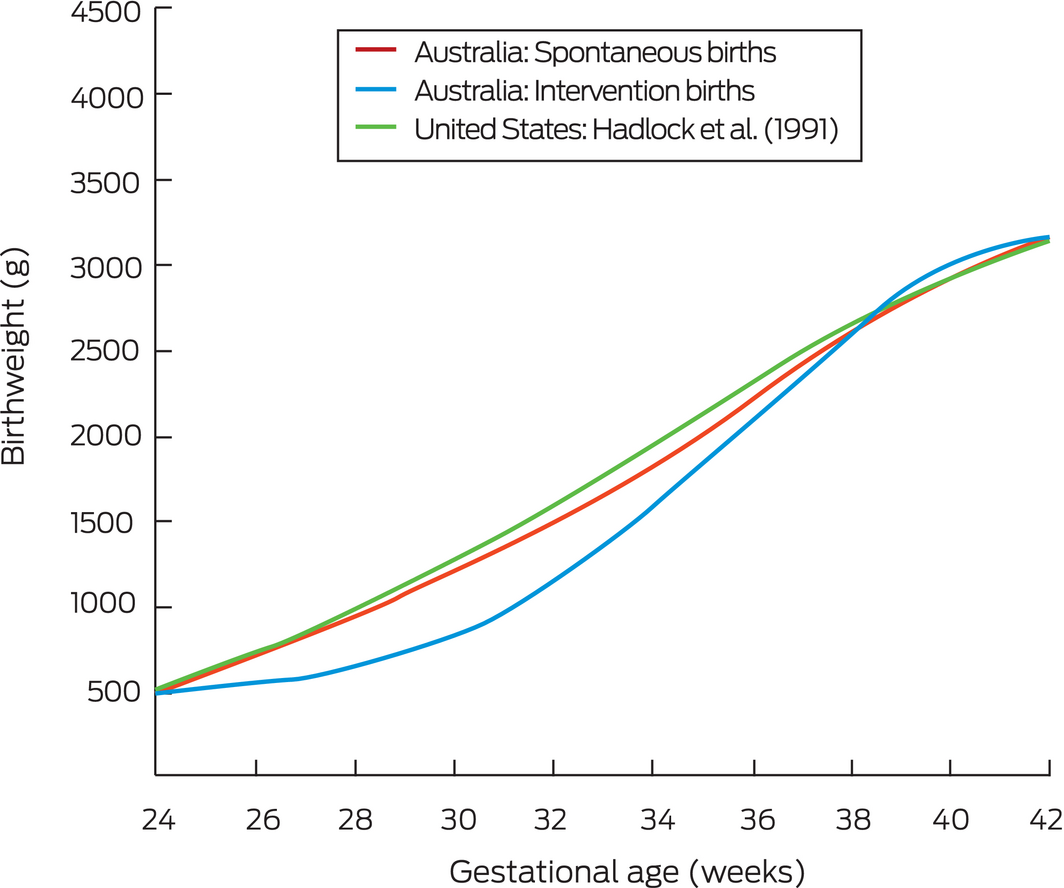 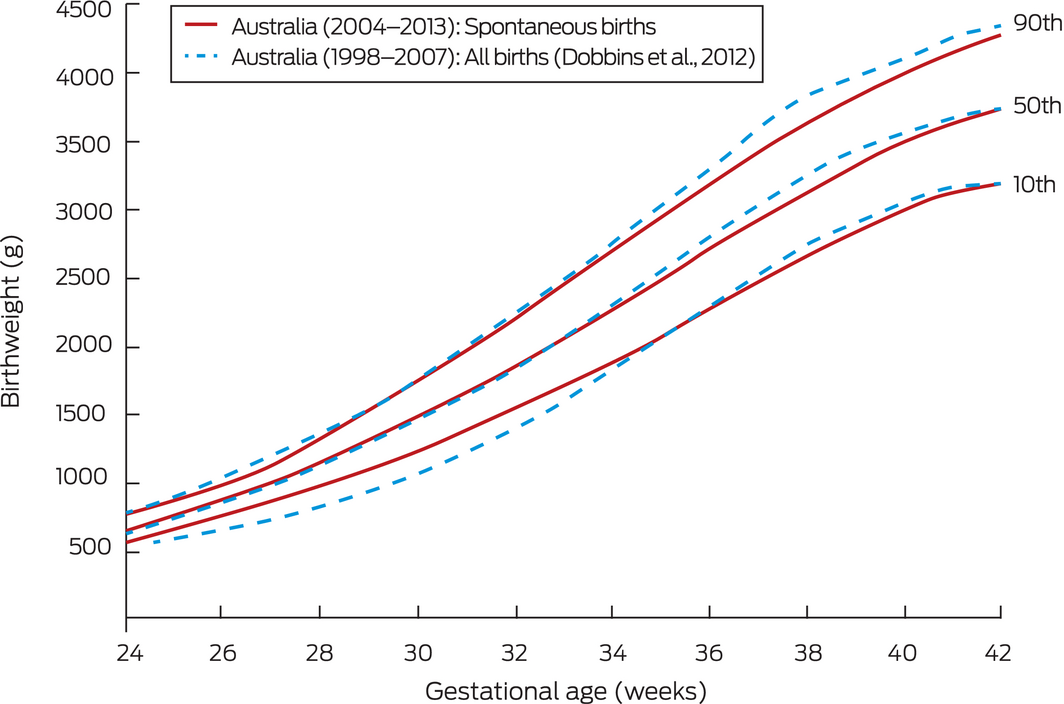 * The Dobbins curves are raw centiles, not regression curves.