Design and setting: Cross-sectional population-based study of 2.53 million singleton live births in Australia between 1998 and 2007.

Results: Between 1998 and 2007, women in Australia gave birth to 2 539 237 live singleton infants. Of these, 2 537 627 had a gestational age between 20 and 44 weeks, and sex and birthweight data were available. Birthweight percentiles are presented by sex and gestational age for a total of 2 528 641 births, after excluding 8986 infants with outlying birthweights. Since the publication of the previous Australian birthweight percentiles in 1999, median birthweight for term babies has increased between 0 and 25 g for boys and between 5 g and 45 g for girls.

Conclusions: There has been only a small increase in birthweight percentiles for babies of both sexes and most gestational ages since 1991–1994. These national percentiles provide a current Australian reference for clinicians and researchers assessing weight at birth.

Birthweight remains one of the strongest predictors of infant mortality and morbidity,1,2 and it has been established that assessing an infant’s birthweight requires summary data that account for gestational age.3 Birthweight percentiles form a reference incorporating weight and gestational age of infants at birth and are used as an adjunct for detecting neonates at higher risk of neonatal and postneonatal morbidity and growth impairment. A birthweight small or large for gestational age, often defined as being lower than the 10th percentile or higher than the 90th percentile, provides an indication of risk of perinatal morbidity and mortality.4

Australia’s first birthweight percentiles based on national population data were published in 1999.5 The period since this publication has seen numerous changes in maternal characteristics:

Our study presents national birthweight percentiles for all male and female singleton infants born in Australia over the 10-year period between 1998 and 2007.

We obtained data on singleton live births between 1998 and 2007 from the National Perinatal Data Collection (NPDC) of the Australian Institute of Health and Welfare (AIHW) National Perinatal Statistics Unit. Information is included in the NPDC for all births in Australia of at least 400 g birthweight or at least 20 weeks’ gestation. Birthweight is recorded to the nearest 5 g, with gestational age recorded in completed weeks based on the first day of the last menstrual period or the best available clinical estimate (including early pregnancy ultrasound examination).

We included births from all mothers, including mothers not born in Australia. Births were not classified by Indigenous status because of ethical restrictions on the use of the perinatal data collection.

The study was approved by the AIHW Ethics Committee (EC341). Approval for use of data was provided by all states and territories.

The birthweight percentiles presented are based on 10 years of high-quality population data that have been shown to be accurate and complete.18 Our percentiles provide a reference for babies born in Australia and update those published in 1999 to better reflect the characteristics of Australian mothers. The data are sufficient in number to provide reliable percentiles for babies of early gestational age. Our approach to excluding implausible birthweights has been used in constructing birthweight percentiles in other countries.4,19 The high quality of Australian birthweight data is demonstrated by the fact that the percentiles from the remaining observations resulted in curves that did not need smoothing.

It is noteworthy that the mean birthweights are relatively stable over time, with a maximum variation over a decade of 13 g for male infants, and 6 g for female infants, in spite of changes in maternal characteristics associated with birthweight.9 This apparent contradiction can be explained by the fact that the mean birthweights are not adjusted for gestational age. For example, while rates of smoking during pregnancy have decreased, there has been a reduction in gestational age (with preterm births increasing from 6.8% of all births in 199120 to 7.4% in 20077). Hence, the expected increase in average birthweight as a result of reduced maternal smoking may have been offset by decreased birthweights from preterm births. It is difficult to assess how other changes in maternal characteristics act together to explain the stability in mean birthweights, highlighting the need for birthweight percentiles to be presented separately by sex and gestational age.

Customised birthweight percentiles have been recommended,21 but their usefulness has been debated.22 There are two recognised features of customised percentiles: first, they use regression-based coefficients adjusted for maternal factors; and, second, they use estimated fetal weight. It is primarily the estimate of fetal weight that contributes to improved prediction of adverse perinatal outcomes, rather than adjustment for maternal characteristics.22 However, fetal (in-utero) weights are not routinely assessed in current practice. Furthermore, the proposition that identifying small for gestational age from customised percentiles, rather than from population reference curves, better predicts adverse outcomes is based on inconsistent evidence.23,24 A simulation study demonstrated that the use of customised percentiles did not improve the identification of infants with intrauterine growth restriction, and concluded that, for the customisation to be useful, the factors used in the customisation model would need to explain an unrealistically high amount of variability in actual birthweight.22 Whether differing points of view and fine areas of disagreement on customised and conventional birthweight percentiles for gestational age have important practical research or clinical implications is questionable.25

Australian birthweight percentiles continue to be used in clinical practice and research.15 The percentiles presented here have a role as a basis for identifying high-risk babies and are recognisable, practical and easily incorporated into charts and presentations. These percentiles provide an up-to-date reference for clinicians and researchers. 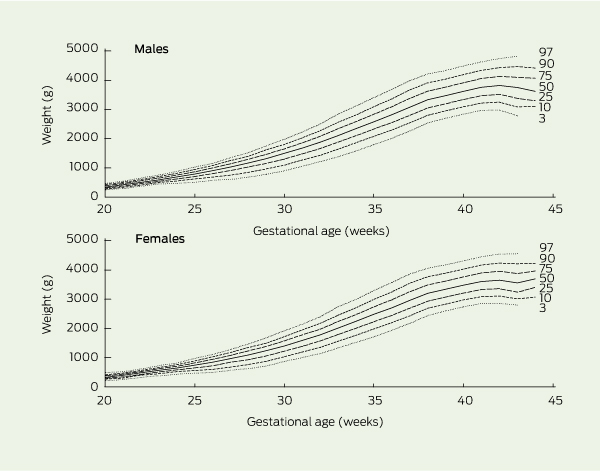 This article is based on data made available by the Australian Institute of Health and Welfare (AIHW). The analysis and views expressed are those of the authors, and do not necessarily reflect the views of the AIHW. Christine Roberts is supported by a National Health and Medical Research Council Senior Research Fellowship (#457078). We thank Zhuoyang Li, Research Officer, Perinatal and Reproductive Epidemiology Research Unit, School of Women’s and Children’s Health, University of New South Wales, for assistance with data processing.