Main outcomes: Mortality (in‐hospital, and 12 months and 8 years after admission to ICU), by Indigenous status.

Conclusions: Adjusted long term mortality and median number of potential life years lost are higher for Indigenous than non‐Indigenous patients after intensive care in hospital. These differences reflect underlying population survival patterns rather than the effects of ICU admission.

The known: Aboriginal and Torres Strait Islander (Indigenous) Australians admitted to intensive care are typically younger and have a heavier burden of chronic disease than non‐Indigenous patients, but in‐hospital mortality is similar for the two groups.

The implications: Rigorous follow‐up of Indigenous patients recovering from critical illness, particularly those who have discharged themselves from hospital, is essential.

Nevertheless, short term outcomes, including hospital survival, are reported to be similar for Indigenous and non‐Indigenous patients admitted to intensive care.2 However, most studies have assessed outcomes only until discharge from hospital, and estimates of hospital survival may be inaccurate if patients from remote or regional areas are transferred from a central ICU to hospitals nearer home, as the ultimate outcome for these patients will be unknown.

The only data on outcomes after intensive care for Indigenous Australians beyond the index hospital admission were collected in a prospective cohort study of 25 patients (including 19 Indigenous patients) in Alice Springs Hospital.9

An episode of critical illness is often a pivotal change in the trajectory of a person's health.10 For example, early post‐discharge mortality was reported to be higher for people with diabetes admitted to intensive care, so that they lost a greater number of life‐years than patients without pre‐existing chronic disease.11

Given the generally poorer long term outcomes for ICU patients with chronic disease, the larger proportion of Indigenous ICU patients with chronic disease, and the sparsity of longitudinal data on Indigenous people discharged from intensive care, we conducted a data linkage cohort study to evaluate the admission and discharge patterns and long term outcomes for Indigenous Australians admitted non‐electively to ICUs in South Australia.

Demographic, hospital episode, and intensive care admission data for patients were extracted for the period 1 January 2007 – 31 December 2016. The data, collected prospectively at each ICU, had been submitted to the Australian and New Zealand Intensive Care Society Adult Patient Database (ANZICS APD).13 The ANZICS APD captures clinical, physiological, and laboratory data for the initial 24 hours of ICU admissions, as well as admission, discharge, and hospital outcome data for all patients admitted to ICUs in Australia and New Zealand. APD data are collected by trained collectors who classify patients as Indigenous, non‐Indigenous, or of unknown Indigenous status according to information in the ICU admission summary and progress notes.

ICU episodes were excluded from our analysis if they were non‐index admissions (that is, repeat ICU episodes within a single hospital admission), planned elective admissions, or the patients were less than 16 years of age (and consequently unable to provide consent for medical procedures in SA). For our analysis of long term outcomes, the first non‐elective hospital encounter was included. Coding for Aboriginal or Torres Strait Islander status in the ISAAC dataset follows the ABS metadata standard for defining Indigenous status;18 patients were deemed to be Indigenous if the Indigenous status field in either the APD or ISAAC datasets recorded this as their status.

Data are reported as frequencies and proportions (categorical variables), or as means with standard deviations (SDs) or medians with interquartile ranges (IQRs) (continuous variables). The significance of between group differences was assessed in χ2 tests (or Fisher exact tests when cell counts were 5 or less), Student t tests, or Wilcoxon rank sum tests as appropriate. Concordance of Indigenous status classification in the APD and ISAAC was expressed with the Krippendorff α coefficient.

The primary outcomes were in‐hospital mortality and mortality 12 months and 8 years after admission to intensive care. As death registry data were available only for South Australia, long term follow‐up was limited to patients with South Australian residential postcodes. Mortality was analysed by univariate and multiple variable logistic regression, with robust standard errors adjusted for clustering by ICU and effect estimates reported as odds ratios (ORs) with 95% confidence intervals (CIs). Covariate models were constructed by step‐forward regression, retaining covariates for which P < 0.1 in univariate analyses and P < 0.05 in the final model, as well as variables deemed clinically important, such as diabetes status.

Changes over time were assessed for non‐linearity, and study year was then entered as a continuous variable, together with an interaction term for Indigenous status. Survival is depicted in Kaplan–Meier curves; the significance of between‐group differences was assessed in log‐rank tests. Adjusted analyses used Cox proportional hazards models with ICU site as a shared frailty; the effect estimates are reported as hazard ratios (HRs) with 95% CIs.

Secondary outcomes included relative survival (at 1, 4, 8 years after discharge from hospital), potential years of life lost, lengths of ICU and hospital stays, mechanical ventilation, ICU and hospital discharge destinations, and numbers of hospital and ICU admissions. Relative survival, referenced to ABS life tables for the general and Indigenous South Australian populations, was used to estimate the residual effect of ICU admission on subsequent life expectancy for patients who survived to hospital discharge; cumulative relative survival was expressed as proportions with 95% CIs. Potential years of life lost were calculated using group‐specific ABS life tables, with an upper reference age of 75 years.

Missing data were not imputed, and the proportion of missing data reported only when it exceeded 10%. P‐values were not adjusted for multiple comparisons. All analyses were performed in Stata/MP 16.0.

A total of 62 371 patient episodes were recorded for the four ICUs during 2007–2016, of which 39 784 were non‐elective index ICU admissions, including 2035 of patients who identified as Indigenous Australians (5.1%; 1837 in ISAAC, 1007 in the APD). Of these patients, 1461 (72%) had South Australian residential postcodes (Box 1; Supporting Information, table 2); most other Indigenous patients had home addresses in the Northern Territory (472, 23%) or New South Wales (65, 3.2%) (Supporting Information, table 3). The overall proportions of patients admitted to individual South Australian ICUs who identified as Indigenous Australians ranged between 3.3% and 6.8%. Concordance of Indigenous status classification in the APD and ISAAC datasets was weak (α = 0.55).

For patients with South Australian postcodes, unadjusted mortality at discharge, and at 12 months and 8 years after ICU admission was lower for Indigenous than non‐Indigenous patients. After adjusting for age, sex, diabetes, APACHE II score, and APACHE IIIj diagnostic group, however, mortality was similar for both groups at discharge, and greater for Indigenous patients at 12 months (adjusted OR, 1.14; 95% CI, 1.03–1.26) and 8 years after admission to intensive care (adjusted HR, 1.23; 95% CI, 1.13–1.35) (Box 4, Box 5).

The number of potential years of life lost was higher for Indigenous (median, 24.0 years; IQR, 15.8–31.8 years) than non‐Indigenous patients (median, 12.5 years; IQR, 0–22.3 years), consistent with the difference in median age of the two groups.

For patients who survived their index hospital admissions, relative survival (that is, compared with background population life expectancy) was similar for Indigenous and non‐Indigenous patients at 1, 4 and 8 years after discharge from hospital (Box 3; Supporting Information, figures 2 and 3).

Our major findings are that, after adjusting for major demographic and clinical factors, in‐hospital mortality was similar for Indigenous and non‐Indigenous intensive care patients, but mortality at 12 months and 8 years after admission was greater for Indigenous patients. Higher levels of chronic disease, remoteness, lower socio‐economic status, and difficult access to health care for Indigenous patients20,21 are probable contributors to higher long term mortality. Comparable studies have reported similar differences in age, chronic disease status, and intensive care admission diagnoses for critically ill Indigenous Australians,3,4,6,12 as well as a greater burden of chronic disease after episodes of critical illness.9

Self‐discharge rates for Indigenous hospital patients are the highest in the world22 and may reflect unfavourable patient perceptions of the hospital environment, institutionalised racism, perceived differences in care,23,24 or communication problems. The median age of Indigenous patients who discharged themselves from hospital was lower than that of those medically discharged, their hospital re‐admission rate was higher, and their 8‐year mortality, after adjusting for age, disease severity, and diagnostic group, was greater. This subgroup of patients is at particular risk of higher mortality after a critical illness.

Our findings underline how pivotal an episode of critical illness can be for Indigenous people, and how health outcomes and mortality risk are affected beyond the end of their hospital admission. While in‐hospital mortality is similar for Indigenous and non‐Indigenous Australians, the difference in long term mortality shows the importance of community‐level health care after non‐elective admissions to intensive care.25 Rigorous follow‐up of Indigenous patients recovering from critical illness, particularly those who have discharged themselves from hospital, is essential.

We have described the largest study of long term outcomes for critically ill Aboriginal or Torres Strait Islander patients. Classification of patients was rigorous, Indigenous status being ascertained and cross‐referenced in complementary datasets (the APD and ISAAC). In our study, fewer than 50% of Indigenous people were identified as such in the APD, and this shortcoming may have influenced findings that have relied on this dataset for identifying Indigenous patients.1,6 Linkage with ABS datasets allowed comparison of post‐hospital survival with underlying population life expectancy.

As with all retrospective data linkage studies, missing and inaccurate data may limit the robustness of our conclusions. However, the proportions of missing data were small, typically less than 5%, and several demographic fields were cross‐checked by linkage between the ICU and ISAAC datasets; fewer than 2% of ICU admissions were unmatched.

Death registry data were available only for South Australia, limiting long term follow‐up to patients with South Australian residential addresses. Not only did this reduce the analysis dataset size, but movement of South Australian patients interstate after discharge from hospital may have biased our 12‐month and 8‐year mortality estimates. The uncertainty of ABS life tables with respect to Indigenous people has been documented;26 these tables were nonetheless the best available data sources for our analysis. 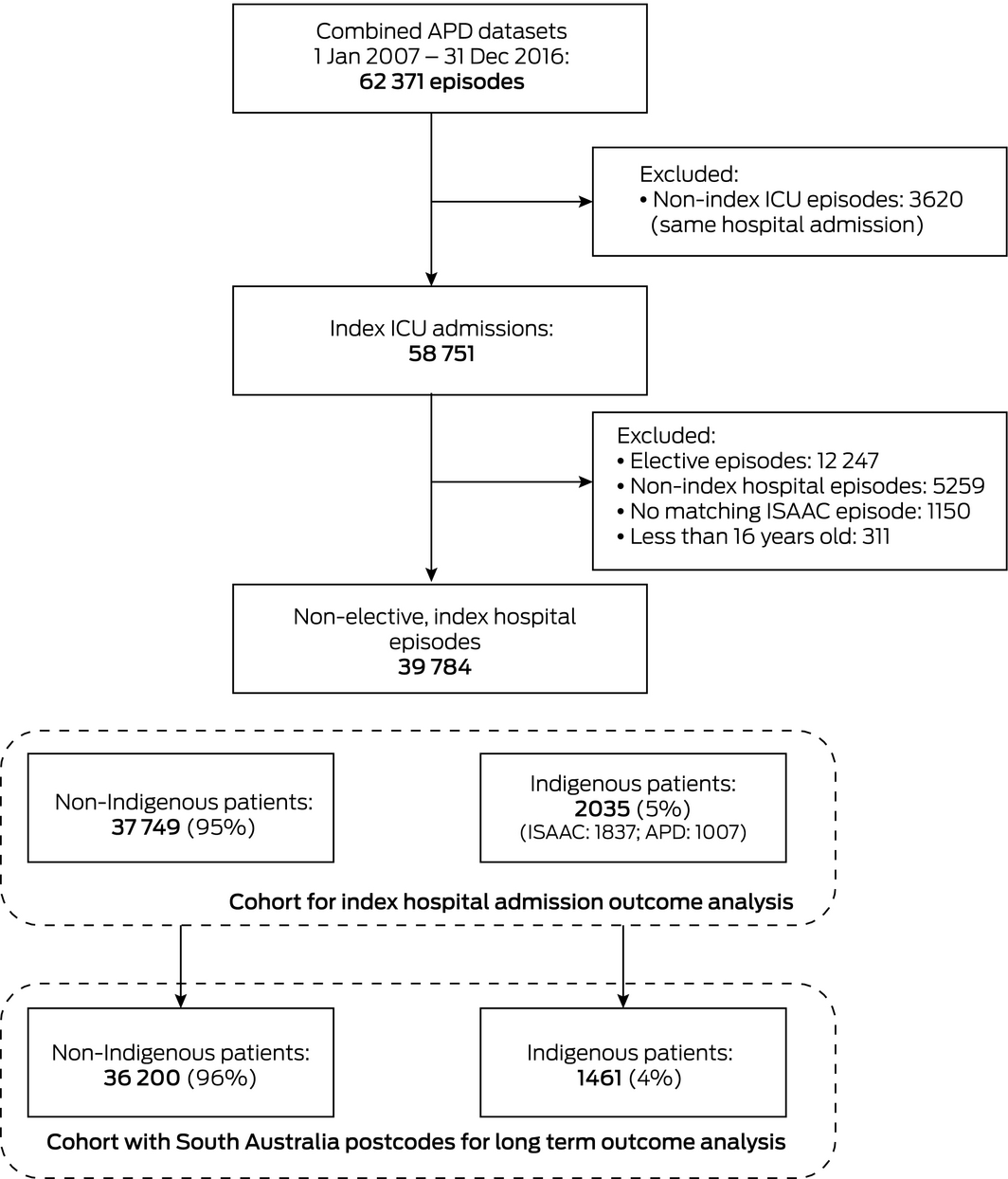