Study design: Studies that assessed the accuracy of FC testing for differentiating between IBD or organic GID and functional GIDs were reviewed. Articles published in English during January 1998 – June 2018 that compared diagnostic FC testing in primary care and outpatient hospital settings with a reference test and employed the standard enzyme‐linked immunosorbent FC assay method with a cut‐off of 50 or 100 μg/g faeces were included. Study quality was assessed with QUADAS‐2, an evidence‐based quality assessment tool for diagnostic accuracy studies.

Conclusions: FC testing is clinically useful for distinguishing organic GID (including IBD) from functional GIDs, and its incorporation into clinical practice for evaluating patients with lower gastrointestinal symptoms could lead to fewer patients with functional GIDs undergoing colonoscopy, reducing costs for both patients and the health system.

Gastrointestinal symptoms are the reason for 5–10% of primary care consultations, and not all patients need to be referred to specialist care.1,2 Confidently distinguishing on the basis of symptoms alone between patients with functional gastrointestinal disorders (functional GIDs) and those with organic gastrointestinal diseases (organic GIDs), such as inflammatory bowel disease (IBD), colorectal cancer, larger polyps (> 1 cm), and diverticulitis, can be difficult for both general practitioners and specialists.

Functional GIDs are chronic, idiopathic disorders, and their typical symptoms include abdominal pain, diarrhoea, bloating, constipation, and alternating bowel habits. But patients with organic GID can present with similar symptoms. Functional GIDs are much more frequent than organic GIDs; the most common functional GID, irritable bowel syndrome (IBS), affects about 10–20% of the population, with onset between 20 and 40 years of age.3,4 Once a functional GID has been diagnosed, further diagnostic tests are not required and patients can be managed in primary care.5 In contrast, several organic GIDs result in inflammation of the colon, and patients with these conditions are best assessed by specialists, often with colonoscopy or cross‐sectional imaging. In young adults (20–40 years of age) the most common organic GID is IBD (including ulcerative colitis and Crohn disease), which affects 0.4% of people under 50 years of age.6

In young adults, faecal calprotectin (FC) is often assessed to distinguish between IBS and IBD, but this approach is not usually recommended as the sole screening tool for people over 50 because of their higher risk of organic GID, including neoplasms.7,8,9,10,11,12 The high prevalence of IBS and low incidence of organic GID in people over 50 have led to suggestions that diagnosing functional GIDs in people over 50 should be based on their medical history, and that the number of investigations, including FC testing, should be kept to a minimum.7,8,9,10,11,12 Despite recommendations that functional GIDs be diagnosed and managed in primary care, large numbers of patients with probable functional GIDs are unnecessarily referred for further assessment, including colonoscopy.13,14,15

Inflammation is the key characteristic that distinguishes organic from functional GIDs. FC assessment is a non‐invasive predictive test with high sensitivity for detecting organic GID (including IBD) and high specificity for diagnosing IBD.16,17 Further, FC is superior to other biomarkers, such as C‐reactive protein and erythrocyte sedimentation rate, in that it localises inflammation to the bowel.16 Nevertheless, few comprehensive evaluations of the clinical effectiveness of FC testing have been published.

Our study was conducted in accordance with the Preferred Items for Systematic Reviews and Meta‐analysis [PRISMA] guidelines.18 Our systematic review was registered with the International prospective register of systematic reviews (PROSPERO) on 17 August 2018 (reference, CRD42018105078).

The titles, abstracts, and study types of retrieved studies were assessed by two of the authors (SC, JB) for eligibility for full text review by two other authors (YA, DP). The study inclusion criteria were:

We excluded studies that included patients with red flag signs or symptoms, such as positive faecal occult blood test, overt rectal bleeding, iron deficiency anaemia, abdominal or rectal masses, or a family history of bowel cancer that would require endoscopic evaluation.

All included studies were graded for methodological quality by two authors (YA, DP) with the revised tool for the Quality Assessment of Diagnostic Accuracy Studies (QUADAS‐2).19 QUADAS‐2 assesses the quality of diagnostic accuracy studies in four domains: patient selection, index test, reference standard, and flow and timing. Each domain is assessed in terms of the risk of bias and (for the first three domains) the applicability of the study results. A study was graded as high quality when there was low risk of bias in at least six of the seven subdomains, and as low quality when there was high risk or unclear risk in four or more subdomains; all other studies were graded as moderate quality. Any disagreements were resolved by discussion with a third reviewer and majority consensus.

In our meta‐analysis we followed the guidance of the Cochrane Handbook for Systematic Reviews of Diagnostic Test Accuracy.20 Our initial aim was to assess the effectiveness of FC testing for distinguishing between IBD and functional GIDs in patients with lower gastrointestinal symptoms. As the number of publications reporting this outcome was insufficient for a meta‐analysis, and studies examining its usefulness for distinguishing between organic GID (including IBD) and functional GIDs were more frequently reported, we added this second testing aim to our meta‐analysis.

We also conducted two unplanned analyses: first, we assessed the effectiveness of FC for distinguishing between people with organic GID or IBD and people with functional GIDs (as patients with possible organic GID or IBD require further investigation by a specialist, usually a colonoscopy, to confirm the diagnosis, it is useful to consider the two groups together); second, we assessed the effect of the choice of FC testing cut‐off value (50 or 100 μg/g) on accuracy in distinguishing between organic and functional GIDs.

The results of diagnostic two‐by‐two table analysis and diagnostic performance measures are reported for each research question. Forest plots (with 95% confidence intervals [CIs]) depict sensitivity and specificity by report. When studies applied both 50 and 100 μg/g cut‐off values to the same patient, we used the 50 μg/g value for our analysis. When a study included results for an individual patient in several comparisons, we analysed only the results associated with FC testing for distinguishing organic from functional GIDs; that is, we included an individual patient's results only once per indication.

We conducted two secondary analyses. First, we calculated the diagnostic odds ratio for each study, a measure of test effectiveness incorporating both sensitivity and specificity that is defined as the ratio of the odds of a test being positive if the patient has a condition and the odds of the test being positive if they do not have the disease; a higher ratio indicates greater accuracy. The diagnostic odds ratio can summarise overall test accuracy when prevalence differ between studies.21 Diagnostic odds ratios were summarised across studies using the random effects model approach of DerSimonian and Laird.22

Second, we applied the method of Reitsma and colleagues23 to generate summary receiver operating characteristic (sROC) curves (sensitivity v false positive rate). The sROC summarises overall test accuracy (the ratio of true positives to false positives), based on all relevant studies and FC cut‐offs (50, 100 μg/g). We present sROC curves for each research question, together with point estimates of the true positive and false positive rates for each study. Summary estimates of sensitivity and specificity (with 95% CIs) were calculated in bivariate analyses according to the approach of Reitsma and colleagues.23 Positive and negative predictive values were calculated from the overall sensitivity and specificity estimates for estimated prevalence rates of 0.1% and 1%.

All analyses were performed in R 3.5.1 (R Foundation for Statistical Computing) with the package mada (version 0.5.8; https://rdrr.io/rforge/mada).

The titles and abstracts of 115 publications (after removal of duplicates) were screened: 93 publications identified by the database search and 22 in reference lists. Thirty potentially eligible studies were selected for full text review: ten had examined the effectiveness of FC testing for distinguishing IBD from functional GIDs, and 18 publications reported on its effectiveness for distinguishing organic from functional GIDs (Box 1).

Study quality was high for eleven studies, moderate for four, and low for three studies. Concerns regarding the subdomains of patient selection and reference standard were the most frequent; in twelve studies, patient selection did not reflect a genuine primary care population, while in others34,35,41 the reference standard test that confirmed the final diagnosis was not clear (Box 2, Box 3).

Seven studies applied both FC pathology cut‐off points for diagnosing organic GID (Supporting Information, table 1). Sensitivity was generally lower and specificity higher at the cut‐off of 100 μg/g (Box 8), but the effect of cut‐off value on log(DOR) was not statistically significant (P = 0.49).

When considering an invasive test such as colonoscopy, the risk of harm associated with the procedure must be balanced against the risk of a missed diagnosis. Given its high negative predictive value (100%) in low prevalence populations (0.1–1% for organic GID), FC testing is suitable for primary care screening of patients for organic GID, although, given its low positive predictive value, further investigations will be required for patients with elevated FC levels. The main benefits of FC testing in primary care would be to confirm the clinical diagnosis of a functional GID by general practitioners, allowing patients to be appropriately managed, and to reduce the risk of delayed diagnosis of organic GID. This approach would greatly reduce the number of referrals to specialist care of young adults without alarm features, and also the number of more expensive investigations, such as cross‐sectional imaging and colonoscopy.

Our analysis found that FC testing is effective for identifying patients presenting with abdominal symptoms who require further investigation. It therefore supports guideline recommendations7,8,9,10,11 that symptomatic patients with FC levels below 50 μg/g can be confidently diagnosed with a functional GID and do not require further testing or evaluation by a specialist.

FC testing in primary care facilitates effective and appropriate allocation of resources and reduces unnecessary risk and expense for both the patient and the health system. For patients with non‐specific lower gastrointestinal symptoms, FC testing reduces the risk of missing an organic GID and ensures prompt specialist review if required. A recent Australian study found that FC testing, combined with a routine panel of blood tests, identified patients who needed prompt review by a specialist, improving the safety of local triage practices.42 By excluding organic GID, findings of non‐elevated FC levels also enable early and reliable diagnosis of a functional GID by general practitioners without gastroenterology referral or further testing. Confident diagnosis of a functional GID in primary care is likely to improve patient acceptance of their diagnosis and their uptake of effective management.5

Accurate diagnosis of a functional GID reduces the number of referrals for more expensive and invasive investigations, including colonoscopy. An audit of colonoscopies in an Australian hospital found that 12% were for patients with functional gastrointestinal symptoms; further, 79% of patients seen in a public hospital who were diagnosed with a functional GID had undergone an endoscopic procedure, at an overall cost (including indirect costs) of $187 million, with an additional $2.4 million per year in emergency department presentations and hospital admissions.43 FC testing has consistently been associated with significant cost savings compared with colonoscopy.15,43 Reducing the number of referrals of patients with functional gastrointestinal symptoms to public health secondary care allows limited clinical resources to be used more effectively and appropriately.

Our analysis indicates that FC testing is clinically effective for distinguishing organic GID (including IBD) from functional GIDs in primary care. We strongly encourage its wider implementation as a screening test for patients presenting with lower gastrointestinal symptoms, and for determining whether referral to specialist care conforms with Australian and international guidelines. 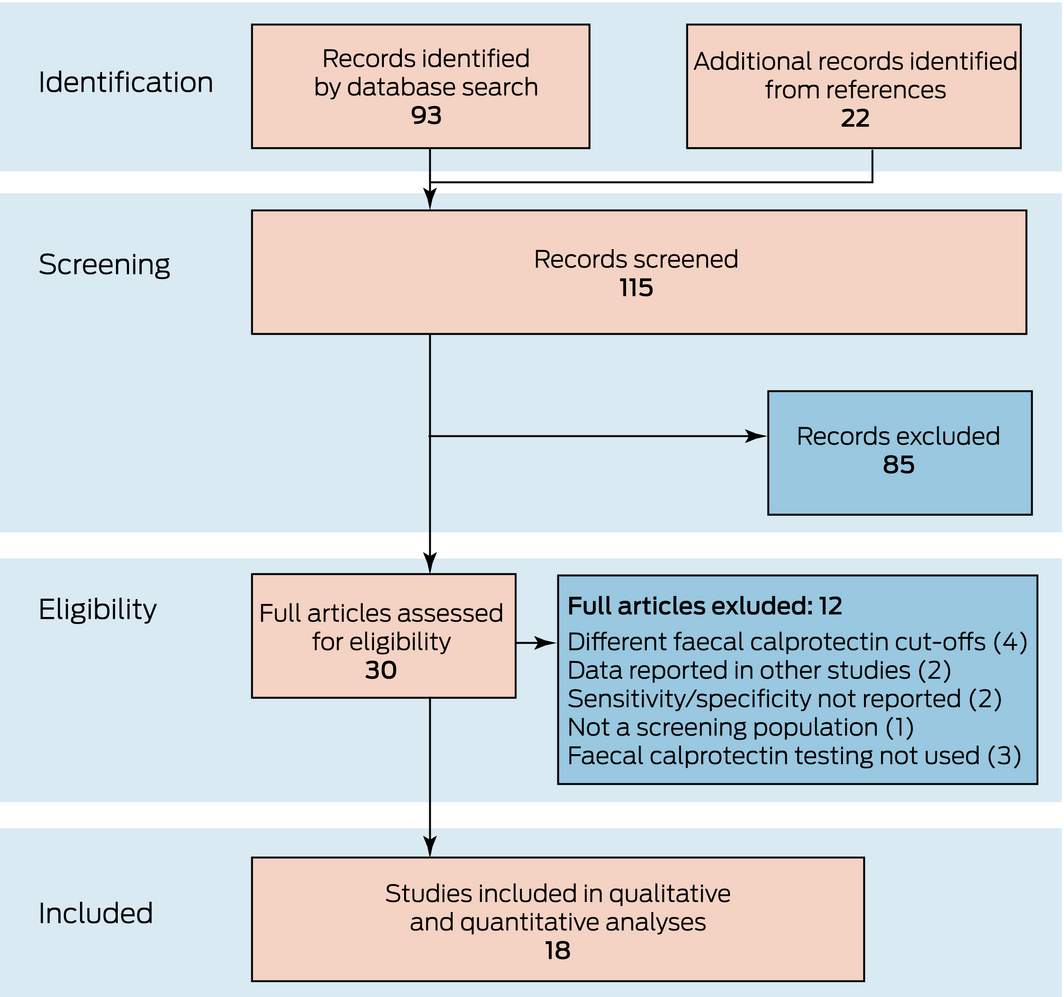 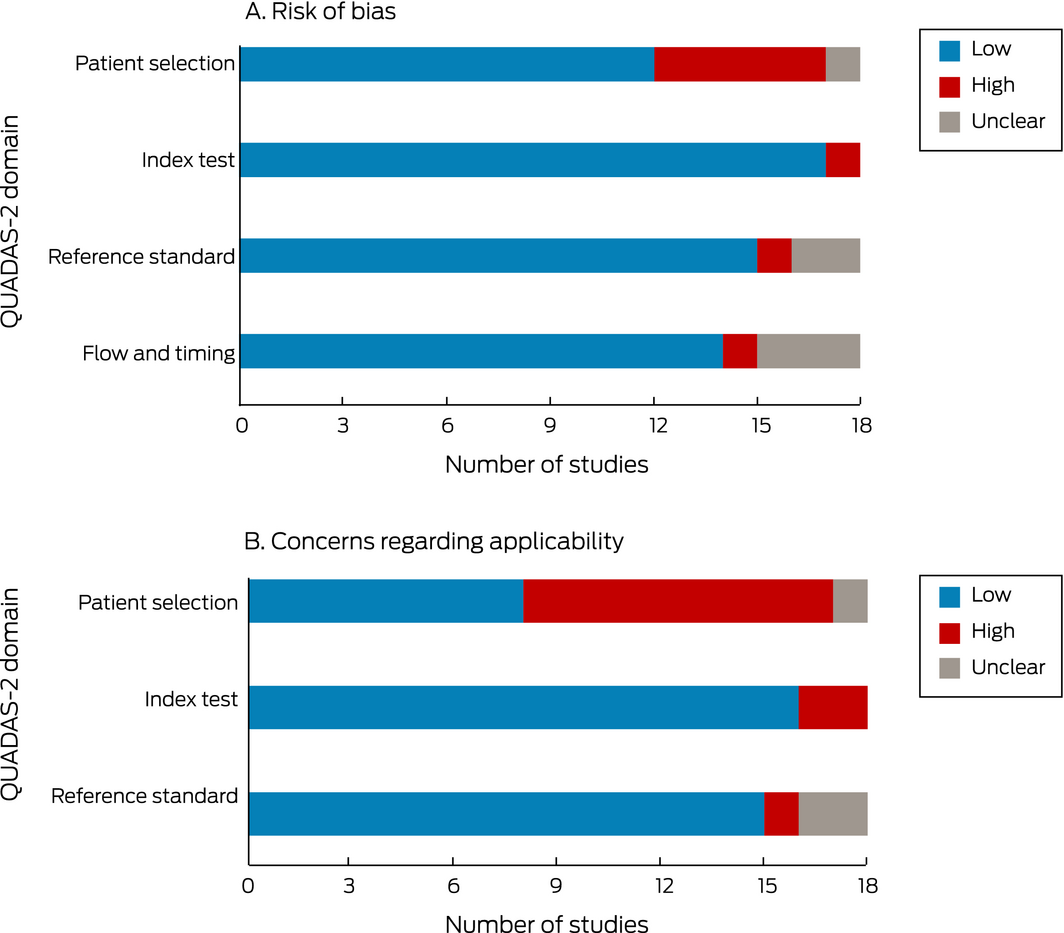 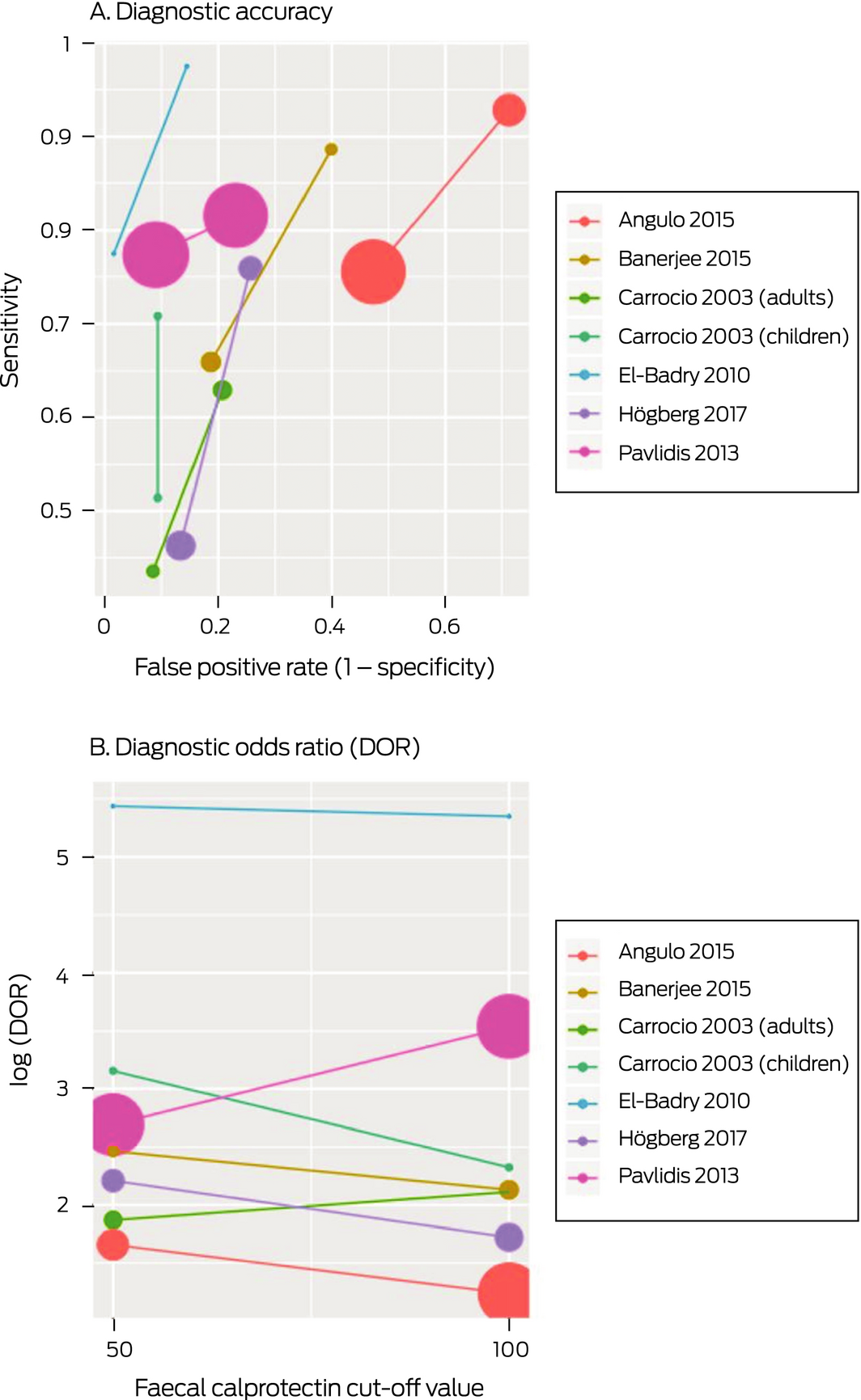 * The area of each symbol is proportional to the inverse variance of the estimate. In panel A, the lower left symbol of each pair corresponds to a cut‐off of 100 μg/g, the higher right symbol to one of 50 μg/g.