Design: Retrospective population-based study; analysis of data from the Oncology Analysis System, an online reporting tool for cancer incidence and outcomes in Queensland.

Participants: Patients over 15 years of age diagnosed with lymphoma in Queensland during 1993–2012.

Conclusion: Relative survival for patients with B-cell non-Hodgkin lymphoma improved significantly with the introduction of rituximab as first-line therapy in Australia.

The known There is a paucity of data on outcomes for patients with different lymphoma subtypes in Australia. It is unknown whether relative survival has improved in recent decades with changes in treatment.

The implications Rituximab has significantly improved relative survival for patients with B-cell non-Hodgkin lymphomas in Australia and is a vital part of current management.

Lymphoma encompasses a diverse group of cancers derived from the transformation and proliferation of lymphocytes. Lymphomas are broadly divided into Hodgkin and non-Hodgkin lymphomas, then further into B- or T-cell origin lymphomas, and finally into aggressive or indolent according to morphology and clinical assessment. In 2017, lymphoma was the sixth most commonly diagnosed cancer in Australia (6232 new cases) and the 12th most common cause of death from cancer (1481 deaths). The prevalence of lymphoma is increasing as more people are diagnosed and survival improves; the age-standardised incidence increased from 15 cases per 100 000 persons in 1982 to 22 cases per 100 000 persons in 2013.1

There is a paucity of data on outcomes for patients with different lymphoma subtypes in Australia. The past decades have seen significant improvements in the diagnosis and classification of lymphoma and the introduction of positron-emission tomography scans. However, chemotherapy protocols (such as cyclophosphamide/hydroxydaunorubicin/oncovin/prednisolone [CHOP] and adriamycin/bleomycin/vinblastine/dacarbazine [ABVD]), stem cell transplantation and radiation have not undergone similarly radical changes. Analyses of randomised trials2-4 and overseas population-based registries have indicated that rituximab, an anti-CD20 monoclonal antibody, improves survival of patients with B-cell non-Hodgkin lymphoma;5 an Australian analysis found some benefit for the addition of rituximab to standard chemotherapy.6

A number of Australian and overseas studies have identified differences in survival for patients from rural and urban regions with cancer.7-9 While inferior survival rates for non-urban residents with solid tumours are often reported, corresponding information on rural and urban patients with lymphoma is limited. Similarly, lower socio-economic status is presumed to predict inferior survival, but whether place of residence or socio-economic status influence outcomes for patients in Australia with lymphoma is unknown.

Data analysed in our study were obtained from the Oncology Analysis System (OASys), the population-based online reporting tool for cancer incidence and outcomes in Queensland. OASys is operated by Cancer Alliance Queensland, which includes the Queensland Cancer Registry (QCR) and the Queensland Cancer Control Analysis Team (QCCAT). QCR records of cancer diagnoses for patients living in Queensland since 1982 and further linked data are consolidated by QCCAT into a single database, the Queensland Oncology Repository (QOR), the basis of OASys.

Patients were included in our analysis if they were more than 15 years old and had been diagnosed with lymphoma in Queensland during the calendar years 1993–2012. Demographic information included age at diagnosis, sex, and region (remoteness) and socio-economic status of residence. Remoteness was categorised according to Australian Standard Geographical Classification (ASGC) at diagnosis,10 and grouped into urban (Brisbane, Gold Coast, Townsville) and rural categories (inner/outer regional, remote, very remote regions). Socio-economic status was classified according to the Socio-Economic Indexes For Areas (SEIFA) Index of Relative Socio-economic Disadvantage (IRSD; quintile 1, most disadvantaged; quintile 5, least disadvantaged), which is based on the characteristics of the area of residence (primarily census data on income, education, employment, occupation, and housing).11 Patients diagnosed prior to 1993 were excluded because lymphoma subtype diagnoses were less precise and therapy less uniform before 1993. Data on disease stage, treatment received, response to therapy, and relapse were not available for individual patients.

“Rituximab era” was defined according to when the drug was first listed by the Pharmaceutical Benefits Scheme for first-line therapy. For diffuse large B-cell lymphoma (DLBCL), this was from July 2003 for patients aged 60 years or more and from April 2005 for patients under 60; for patients with untreated advanced stage follicular lymphoma, it was December 2006.

Lymphomas cannot be analysed as a single group in epidemiological studies because of the marked heterogeneity in disease biology, treatment, response to treatment, and curability. We therefore included common subtypes for which the histological diagnosis is likely to have been consistent during the study period: DLBCL, follicular lymphoma, highly aggressive lymphomas (eg, Burkitt lymphoma, plasmablastic lymphoma), Hodgkin lymphoma, and peripheral T-cell lymphomas (PTCLs).

The 20-year study period was divided into 5-year eras for assessing the impact of treatment changes and rituximab availability. In the primary analysis, we estimated the relative survival of patients with each lymphoma subtype, employing a cohort approach and the Ederer II method.12 Relative survival is defined as the ratio of the number of observed deaths in a cancer cohort to the observed number of deaths in a cohort of individuals without cancer. We compared the mortality of lymphoma patients with that of the general population using age-, sex-, and calendar period-generated (expected) mortality rates from Queensland life tables in OASys compiled from Australian Bureau of Statistics population and death data.13

Overall survival — the proportion of patients still living at a given time point — was determined by the Kaplan–Meier method.

Seven patients for whom data for place of residence or socio-economic status were missing were excluded from the relevant analyses. Statistical analyses were performed in Stata 13.1 (StataCorp).

Significant improvements in relative survival were evident for B-cell non-Hodgkin lymphoma subtypes after the introduction of rituximab as first-line therapy. The 13 percentage point increase in overall survival and 17 percentage point increase in relative survival for people with DLBCL after the introduction of rituximab was the first major improvement in outcome since the introduction of CHOP chemotherapy in the 1970s;16 the improvement for people with follicular lymphoma was similar in magnitude. These findings are consistent with the reported results of randomised trials3-5 and registry studies.6 Rituximab was not available during the study period for treating highly aggressive lymphomas, such as Burkitt lymphoma; the improvement in relative survival for these lymphomas coincided with the widespread uptake of brief, high intensity chemotherapy regimens inspired by those employed in paediatric oncology.17,18

The lack of improvement in relative survival for patients with Hodgkin lymphoma or PTCLs is consistent with other reports.19,20 The relative survival rate for Hodgkin lymphoma was already high during 1993–1997 (81%), and novel agents (such as brentuximab vedotin and PD1 inhibitors) were not available until after 2012. Conversely, the outcomes of CHOP chemotherapy for patients with PTCL are still poor, and this indicates an unmet medical need.

Our finding that relative survival was lower for rural patients with DLBCL than for urban patients data is consistent with overseas reports of lower survival rates among people with lymphoma in regional communities or with solid cancer.21,22 Relative survival was also lower for rural patients with follicular lymphoma, Hodgkin lymphoma, or PTCL, but the differences were not statistically significant in our multivariate analysis. Higher age, more advanced disease, worse performance status, lower curative chemotherapy administration rates, and delays in receiving curative chemotherapy have been advanced as reasons for differences in outcomes between rural and urban patients with lymphoma.21 Similarly, higher socio-economic status was associated with higher relative survival of patients with DLBCL, follicular lymphoma, or Hodgkin lymphoma in our univariate analysis, but not in the multivariate analysis. This suggests that the effects of living in rural or disadvantaged areas are modulated by other variables, such as having higher proportions of older patients, for whom survival outcomes are poorer. After adjusting for these factors, our study may not have had the power to detect small differences in relative survival.

In Australia, treatment of lymphoma is universally available through the public health system. Patients with lymphoma during the study period were predominantly treated in tertiary hospitals in capital cities or in a small number of larger regional hospitals. Across the 20-year period, cancer services expanded considerably and new centres were established in regional areas to improve accessibility to therapy. In addition, transfer and support schemes have been introduced to assist rural residents with their travel to tertiary referral centres. To improve their relative survival, patients living in rural or lower socio-economic status areas should be referred to tertiary hospitals early. In contrast to most solid cancers, many lymphoma subtypes, even at an advanced stage, are curable. Although indolent lymphomas such as follicular lymphoma are considered incurable by chemo-immunotherapy, access of patients to effective treatment is clearly associated with improved overall survival.

Information regarding disease stage, prognostic information (eg, international prognostic index23), and comorbid conditions is not collected by OASys, so their influence on survival could not be analysed. Place of residence and socio-economic status were determined by the patient’s address at the time of diagnosis, but many patients from remote areas will have travelled to urban centres for treatment. Place of residence and socio-economic status may be less relevant for outcomes, particularly for urgent treatment of patients with aggressive lymphomas.

In our population-based assessment of survival of Queensland people with lymphoma, we found that relative survival significantly improved for patients with B-cell non-Hodgkin lymphoma subtypes (DLBCL, follicular lymphoma) following the introduction of rituximab as first-line therapy, and for patients with highly aggressive lymphomas after the shift to more aggressive chemotherapy regimens. Patients travelling from rural and lower socio-economic status areas to tertiary referral centres should be assisted, to ensure equity of access to effective treatment. Given the geographic size of Australia and the relatively favourable outcomes for patients with most lymphoma subtypes compared with those for patients with solid cancers, it is important that all treating medical practitioners be aware of the benefits of coordinated care in the tertiary setting for rural patients. Our data should serve as a benchmark for future survival analyses in Australia. 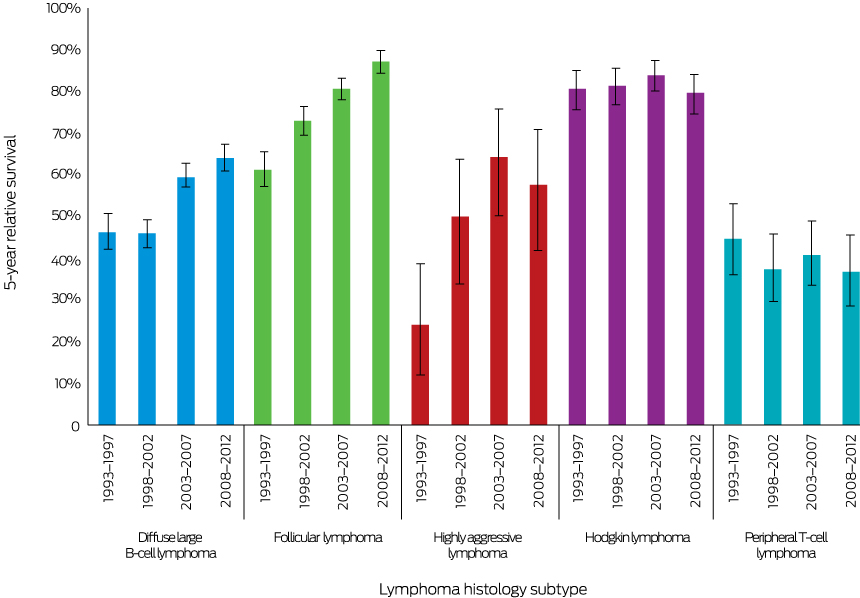 Box 3 – Overall survival for each lymphoma subtype, by treatment era