Bushfires and hazard reduction burns routinely expose Australians to fine particulate matter with an aerodynamic diameter of less than 2.5 μm (PM2.5) with a range of health effects, including premature mortality.1 Exposure to landscape fire smoke (LFS) will rise as the frequency of bushfires increases with climate change.2 To estimate the health effects of PM2.5 exposure attributable to LFS in Sydney, we assessed all-cause mortality and hospitalisations for cardiovascular and respiratory disease in the Sydney Greater Capital City Statistical Area3 (GCCSA) during 2001–2013.

Our methods are described in the online Appendix. In brief, we quantified the population-level health effects attributable to pollutant exposure on the basis of risk estimates from epidemiological studies and local estimates of exposure and disease incidence. Dates of verified LFS events affecting Sydney were retrieved from a previously validated database4 that included events identified in media archives, agency records, and satellite images for all days on which 24-hour mean PM2.5 levels exceeded the 95th percentile of the long term daily city-wide averages. For each day with a validated LFS event, the background PM2.5 level was estimated from the mean of the values for the 30 nearest non-LFS calendar days in each year. Daily PM2.5 concentrations were interpolated to Sydney GCCSA Statistical Area 3 (SA3) averages. The health burden was estimated for each SA3 from death and hospitalisation incidence rates, daily PM2.5 exposure, and epidemiological risk estimates recommended by the World Health Organization.5 Formal ethics approval was not required for this analysis of publicly available data.

Exposure estimates were based on a small number of air pollution monitors (six). Our conservative methods were similar to those applied in a recent assessment of hazard reduction burning near Sydney during May 2016 which estimated that 14 premature deaths were caused by LFS exposure.6 Our results indicate that the health impact of LFS exposure during 2001–2013 was similar to having a May 2016-like event every 12 months.

Our analysis suggests that LFS is an important contributor to overall air pollution and the related population health burden. Our health risk estimates assumed short term, immediate impacts of increased PM2.5 levels, but extended exposure is likely to have greater effects. Further, we included in our analysis only LFS events associated with PM2.5 levels exceeding the 95th percentile of background values; our exposure estimates may therefore be conservative. The excess deaths caused by LFS exposure are likely to be in vulnerable groups, such as older people and those with chronic diseases.

Seventy-seven deaths in New South Wales were directly attributed to bushfires during 1901–2011.7 Our study indicates that a substantial additional health burden is associated with the indirect effects of smoke from bushfires and hazard reduction burns. We recommend that the health risks of fire smoke pollution be explicitly factored into managing fires through collaboration between health, environment, and fire management agencies. 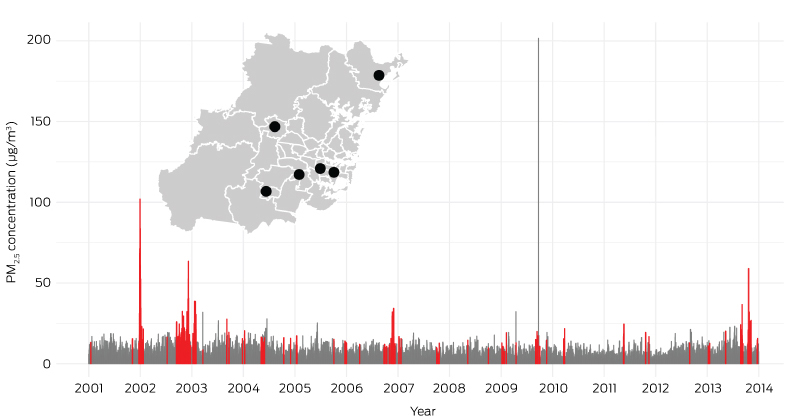