A rapid assessment of the impact of hazard reduction burning around Sydney, May 2016

Hazard reduction burning reduces the risks associated with bushfires,1 but produces fine particulate matter air pollution (particles of less than 2.5 μm diameter, PM2.5), which has recognised effects on health.2 In May 2016, hazard reduction burns around Sydney caused smoky conditions with high PM2.5 concentrations on several days. We describe a rapid assessment of the impact of smoke-related PM2.5 on all-cause mortality, and on hospitalisations for cardiovascular and respiratory conditions in the Sydney Greater Capital City Statistical Area (GCCSA) during May 2016.

Detailed methods are provided in the Appendix at mja.com.au. Briefly, air pollution impact assessment allows quantification of the local effects of a pollutant. It integrates scientific evidence of the pathological response to air pollution with local information about exposure and incidence of disease. We analysed public air pollution data from the New South Wales Office of Environment and Heritage (OEH), population and mortality data from the Australian Bureau of Statistics, and hospitalisation data from the NSW Ministry of Health.

To estimate the effect on health, the population-weighted mean PM2.5 concentration and baseline incidence rates (baseline death and hospitalisation rates) were combined with the short term concentration–response coefficients recommended by the World Health Organization.3 These coefficients are generally similar to or lower than many fire smoke-specific estimates4 and are routinely used for health impact assessments of population exposure to particulate matter.

The Box shows the spatial and temporal distribution of smoke-related PM2.5 in the study region. Six days were identified as being clearly smoky; the mean smoke-related PM2.5 concentration over these days was 24 μg/m3 (SD, 6). As review of satellite data identified smoke around Sydney on several other days in May, this was probably a conservative estimate.

We estimated that 14 premature deaths (95% confidence interval [CI], 5–23), 29 cardiovascular hospitalisations (95% CI, 5–53) and 58 respiratory hospitalisations (95% CI, 0–124) were attributable to smoke from hazard reduction burning on the six smoky days. The breadth of the CIs for our estimates only reflect imprecision in the concentration–response coefficient employed.

Exposure to PM2.5 elicits measurable pathophysiological responses, including inflammation, changes in blood coagulability, oxidative stress, reduced endothelial function, and autonomic reactivity.5 Although not common, these responses can precipitate serious clinical outcomes (including cardiac arrest and premature death) in people with pre-existing illness. Our study highlights the potential scale of the public health impact when smoke affects a population of nearly 5 million people for several days.

Our estimates are based on standard methods, the health profile of the Sydney population, and conservative assumptions about the relationship between smoke concentrations and health outcomes. Further work evaluating the sensitivity of the results to these assumptions, currently underway, will allow more precise estimates.

We do not suggest that hazard reduction burning should be stopped. The risks from air pollution must be evaluated in the wider context of the effects of bushfire and of community safety. However, managing smoke should be integral to planning of hazard reduction programs. Close collaboration between health, environment and fire management agencies is essential for achieving the best overall outcomes for community wellbeing. 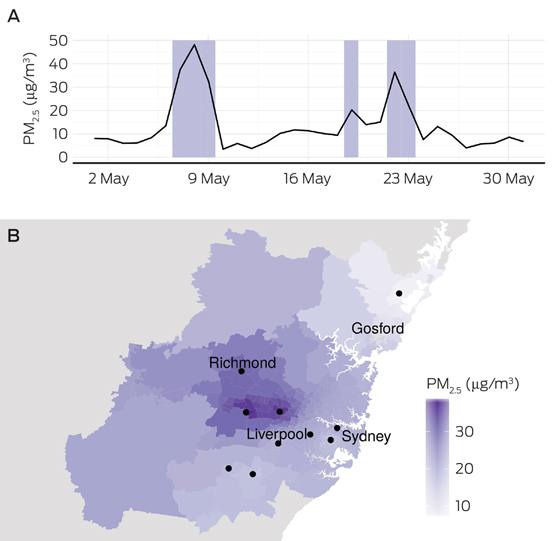