Changing trends in the incidence of invasive melanoma in Victoria, 1985–2015

Objectives: To estimate the incidence of cutaneous malignant melanoma in Victoria; to examine trends in its incidence over the past 30 years. Secondary objectives were to examine the anatomic location and thickness of invasive melanoma tumours during the same period.

The known The incidence of cutaneous malignant melanoma has stabilised in recent years.

The new The incidence of invasive melanoma is declining among Victorians under 55 years of age, but is still increasing in those aged 55 or more, but at a slower rate than before the mid-1990s.

The implications Melanoma remains a significant health problem in Victoria. Prevention and early detection campaigns should take into account differences in presentation between men and women and in different age groups.

The most recent report on cancer in Australia by the Australian Institute of Health and Welfare recorded 12 744 new cases of invasive melanoma during 2013,1 making it the third most commonly diagnosed cancer in both men and women. Its incidence is greater in more northern parts of Australia; melanoma is the second most common cancer diagnosed in Queensland and New South Wales.2-4

Intermittent sun exposure and sunburn have long been recognised as major modifiable risk factors for melanoma.5,6 Accordingly, public health campaigns for the prevention of melanoma and of skin cancers in general have focused on sun protection.7 The stabilisation of the incidence of invasive melanoma in Australia has largely been attributed to these efforts.8,9

Monitoring the incidence of invasive melanoma remains important for policy makers, health care professionals, and the public. Understanding trends and characteristics in its incidence can guide health care professionals in identifying the patients at greatest risk, as well as informing the evaluation of public awareness campaigns and decisions about where future efforts should be directed. We therefore examined recent trends (1985–2015) in the incidence and characteristics of melanoma in Victoria.

We undertook a population-based, descriptive study of registry data. All Victorian Cancer Registry (VCR) records of melanoma diagnosed during 1985–2015 were reviewed. The VCR is managed by Cancer Council Victoria (CCV) on behalf of the Victorian Department of Health and Human Services. Hospitals and pathology laboratories in Victoria are legally required to report details of all diagnosed melanomas. The only inclusion criterion for our study was that patients were Victorian residents at the time of diagnosis. Our primary focus was invasive melanoma. Only the first instance of melanoma for a patient was included in the incidence analysis, consistent with standard international practice.10 Information recorded for each tumour included anatomic site (according to the International Classification of Diseases for Oncology, version 3 [ICD-O-3]) and Breslow thickness.

Changes in melanoma incidence were assessed in a joinpoint analysis.13 Joinpoint regression models are useful for assessing changes in incidence trends by identifying combinations of trends that provide a statistically significantly better fit to a data series than a single trend line. The logarithm of the age-standardised rates was assumed to have a linear trend between joinpoints, with errors following a Poisson distribution. Estimated annual percentage changes between joinpoints were determined from the fitted trends. Joinpoints were investigated by grid search and additional joinpoints were incrementally tested, with a minimum of four observations between joinpoints.

The statistical independence of sex differences in the distribution of anatomic sites (ICD-O-3) and tumour thickness were analysed in χ2 tests, with Bonferroni correction for multiple comparisons. P < 0.05 was deemed statistically significant.

The investigators were granted approval from the CCV for access to and analysis of the data. The protocol for this study was approved by the Northern Sydney Local Health District Human Research Ethics Committee (reference, LNR/17/HAWKE/206).

The distribution of tumour thickness classes was similar for both sexes in 2015 (P = 0.29; Box 4), and was fairly constant throughout the study period (data not shown). The proportion of thicker tumours (> 2 mm) was larger in older age groups of both sexes (online Appendix, table 3); the proportion was larger for men than for women (19% v 14%) (Box 4). Almost two-thirds (66%) of tumours more than 4 mm thick and less than one-third (32%) of those less than 1 mm thick were in people age 70 or more. The scalp and neck were the anatomic sites with the greatest proportion of thick tumours; the site with the greatest proportion of thin tumours was the trunk (online Appendix, table 4).

The incidence and cumulative lifetime risk of invasive melanoma in Victoria was higher in men than in women; in 2015, one in 16 men developed invasive melanoma by the age of 85, compared with one in 26 women. The difference is largely attributable to the higher incidence in older men. Since the mid-1990s, the increase in the incidence of invasive melanoma has slowed in both sexes; in women, the rate has plateaued. The incidence remains higher in more northerly states, but the trends are similar to those in other Australian states and for Australia overall.3,4,8,9 However, our findings are not congruent with a recent report than the incidence of melanoma is declining in Australia.9 The inconsistency may reflect differences in trends for different states; for example, there is greater latitude in Queensland for improvement because of the relatively higher incidence.2,14 Further, our study covered 4 more years than the earlier report;9 together with differences in the base populations used for age standardisation, this may also have contributed to our divergent findings.

The incidence of melanoma is higher in Australia and New Zealand than elsewhere in the world,8,9 but is rising in the United States and several European countries, including Norway and Sweden, where the overall incidence is about 30 cases per 100 000 population.8,9 In Europe, the incidence in several countries has been rising by about 5% each year (eg, Norway and Sweden, 2004–2011; United Kingdom, 1991–2011).9 However, the incidence of melanoma in New Zealand and the United States appears to have stabilised,8,9 similar to our findings for Victoria.

A promising finding was the declining incidence in people under 55 years of age of both sexes, with annual decreases since the mid-1990s of 1.4% for men and 1.9% for women. Similar age-related differences have been reported in the US.15 More substantial decreases in younger age groups have been reported in Queensland: annual declines of 3.8% (men) and 3.4% (women) for people under 40, and of 2.6% (men) and 1.7% (women) for people aged 40–59 years, with the incidence stable for those aged 60 years or more.14 In Victoria, the overall incidence of melanoma is elevated by the continued increases in incidence among older people, but it may stabilise as the rate of increase in older age groups decreases as currently younger people reach these age groups.

These results attest to the effectiveness of skin cancer prevention campaigns since the early 1980s, such as the Slip! Slop! Slap! and SunSmart campaigns.7 Given the long latency between excessive sun exposure and the clinical presentation of melanoma, the first observable changes attributable to primary prevention campaigns would have reasonably been expected in the mid-1990s.

Melanoma thickness is a key prognostic marker,21,22 and we found little change in the distribution of the thickness of invasive tumours over time. The higher proportions of face, scalp and neck tumours in older age groups, particularly in older men, could be related to occupational and lifelong sun exposure rather than intermittent extreme exposure,23,24 and a greater proportion of tumours at these anatomic sites were thick tumours. The persistence of thick tumours might be partially explained by the frequency of nodular melanomas, which grow rapidly and are difficult to detect early.25

The difference between men and women in the anatomic distribution of melanoma tumours was marked. The higher proportions of tumours on the face, scalp and neck in men and of tumours on the upper and lower limbs in women may both be explained by current clothing and grooming trends, with men generally having shorter hair and women more likely to routinely expose more of their limbs more frequently.

The risk of subsequent melanoma after an initial melanoma diagnosis is widely recognised. Standardised incidence ratios (SIRs) in Australia for the excess risk following a diagnosis of cancer are generally lower than for other countries because of the high background incidence of melanoma.26,27 The VCR has previously reported SIRs for men of 7.9 (under 65 years) and 6.6 (65 or over) and for women of 7.3 (under 65 years) and 7.2 (65 or over).26 We could not calculate accurate SIRs because the population at risk could not be defined without data on deaths.

There is an opportunity to both improve patient health and to achieve economic savings. The cost-effectiveness of skin cancer prevention campaigns has been demonstrated.28,29 Similarly, identifying and monitoring patients at high risk of melanoma has been shown to provide better patient outcomes and to be cost-effective.30 To complement the skin cancer prevention messages that are largely directed to the young, public awareness campaigns could specifically target older people and men to improve earlier detection by encouraging self-screening and having suspicious lesions and moles investigated. Promoting early detection in these groups, in which the incidence of invasive melanoma is highest, could reduce the prevalence of thick tumours, which are associated with poor prognoses and high economic costs.21,30

One limitation of our study was that our analysis was restricted to Victoria. Further, investigating trends in melanoma subtype would also be a useful extension of our analysis.

Our finding that growth in the incidence of invasive melanoma in Victorians under 55 has slowed since the mid-1990s is encouraging. However, complacency is not appropriate. Melanoma remains a significant health problem in Victoria, and its incidence is still increasing in older people. Less encouraging is that the proportion of thicker tumours remains steady and therefore, despite recent progress in systemic therapies, continues to be a problem. The higher rates of thicker tumours in older people show the importance of early detection in these patients, and this should be the focus of public awareness campaigns. 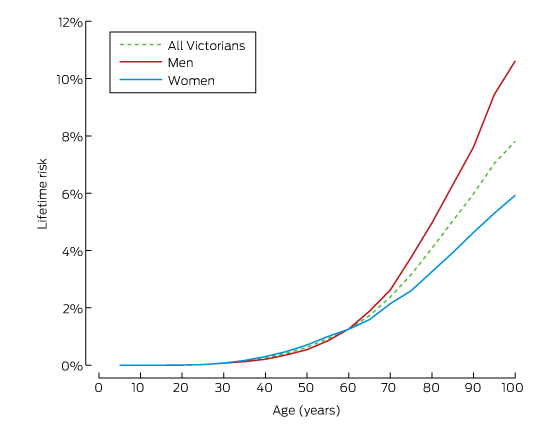 Box 2 – Age-standardised incidence of invasive melanoma, by year and sex (A, males; B, females), with joinpoint analysis-fitted trends

Box 3 – Age-standardised incidence of invasive melanoma, in Victoria, 2015, and estimated annual percentage changes in incidence, by sex and joinpoint segment*