Frenotomy for tongue-tie in Australian children, 2006–2016: an increasing problem

There is no universally accepted definition of tongue-tie or ankyloglossia, but it may be described as a congenital abnormality of the lingual frenulum that limits the range of movement of the tongue, interfering with feeding or speech.1,2 There is little consensus among health professionals about how tongue-ties should be managed,1 and little reliable evidence for the benefits of frenotomy.2 A range of techniques are employed to treat clinically significant ties surgically (frenotomy or frenectomy), including scissors and laser surgery. Increases in the number of tongue-tie diagnoses and in lingual frenotomy rates have recently been reported in Canada and the United States.3,4

Clinically significant tongue-tie in breastfeeding pairs was overlooked during the second half of the 20th century. Tongue-tie (and the newer diagnoses of upper lip tie and posterior tongue-tie) have received increased attention following the resurgent commitment of women to breastfeeding over the past decade and the growth in numbers of breastfeeding support professionals.1,5

Our results indicate that frenotomy rates in most of Australia have increased significantly over the past decade. Increases have similarly been reported for British Columbia in Canada (2004–2013: 89% increase) and the United States (1997–2012: 866% increase).3,4 Medicare data underestimate the frenotomy rate, as this information does not capture frenotomies in public hospitals, where Medicare rebates are usually not applied. More significantly, Medicare data do not capture frenotomies performed by dentists, particularly laser frenotomy. In the ACT, however, the limited availability of laser frenotomy before 2016 means that Medicare data probably capture most procedures not undertaken in public hospitals. The almost 40-fold increase in the rate of Medicare-rebated frenotomies in the ACT was much greater than the nevertheless marked increases in other Australian states. The magnitude of this increase may provide an indication of how the national frenotomy rate will increase over the next few years, and lead us to question whether this surgical management approach is supported by sufficient evidence. 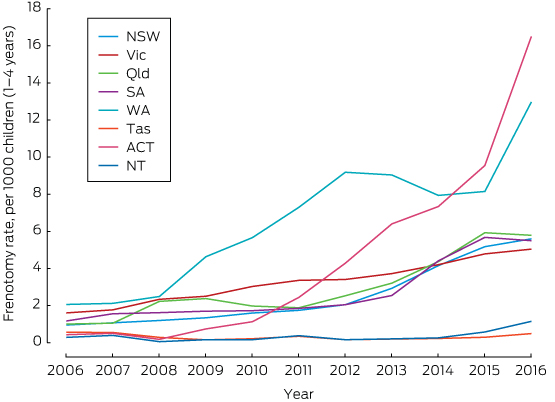