Methods: Participants underwent an interviewer-administered questionnaire that collected socio-demographic information and past ocular care history, including cataract surgery. For those with visual acuity worse than 6/12, anterior segment photography and slit lamp examinations were conducted.

Results: Cataract surgery coverage rates calculated with the NEHS definition 1 of vision impairment (visual acuity worse than 6/12) were lower for Indigenous than non-Indigenous participants (58.5% v 88.0%; odds ratio [OR], 0.32; P < 0.001). According to the World Health Organization definition (eligibility criterion: best-corrected visual acuity worse than 6/18), coverage rates were 92.5% and 98.9% for Indigenous and non-Indigenous Australians respectively. Greater age was significantly associated with higher cataract surgery coverage in Indigenous (OR, 1.41 per 10 years; P = 0.048) and non-Indigenous Australians (OR, 1.58 per 10 years; P = 0.004).

The implications The availability and use of cataract services in Indigenous communities should be improved.

Cataract surgery is the most common elective surgical procedure around the world, with an average annual global treatment cost of US$573 million.1 In Australia, 229 693 operations were performed during 2013–14.2 Growth in demand for cataract surgery is driven by the increasing prevalence of cataract associated with population ageing, coupled with improvements in the safety and efficacy of the procedure.3-5

As cataract is the leading cause of blindness (51% of cases internationally)6 and surgery usually restores vision,7 the World Health Organization selected cataract surgery coverage rates as core indicators of the success of its “Universal eye health: a global action plan 2014–2019”, a program that aims to eliminate avoidable blindness.8 Consequently, it is imperative that signatory nations, including Australia, document cataract surgery coverage rates. The WHO defines the coverage rate as the proportion of people with both bilateral cataract and vision impairment (VI) or blindness — visual acuity worse than 6/18; that is, not able to read letters on a chart at 6 metres that a person with normal vision (6/6 vision) can read at 18 metres — who have had their vision corrected by cataract surgery on one or both eyes.8 However, given that cataract surgery may be clinically indicated for people with visual acuity better than 6/18 and that the definition of VI varies between countries, the definition of the coverage rate may need revision.9,10

Cataract surgery coverage rates may vary across the Australian population. There is significant heterogeneity in the availability and uptake of eye health services, including cataract surgery, for Indigenous and non-Indigenous Australians, and for people in areas of different geographic remoteness.11-13 A recent assessment of variations in waiting times for surgery by remoteness found that the disparity for cataract surgery was greater than for any other surgical procedure.2 As eye health surveys have not adequately stratified the non-Indigenous population by remoteness, it is unknown whether their cataract surgery coverage rates vary according to geographic location or other socio-demographic and health factors.

The sampling methodology of this study is described in detail elsewhere.14 In summary, Australian census 2011 data were used to randomly select 1738 Indigenous Australians aged 40 years or more and 3098 non-Indigenous Australians aged 50 years or more from 30 different geographic sites between March 2015 and April 2016. The younger age for selecting Indigenous participants reflects the earlier onset and more rapid progression of eye disease in this population.15 Population clusters were stratified by remoteness of residence (Major City, Inner Regional, Outer Regional, Remote, and Very Remote). Trained recruiters visited each household and enrolled participants with a standard script. Based on consultations with local Aboriginal medical services and community elders, methodological adjustments (eg, telephone and word-of-mouth recruitment, as well as recruitment from nearby health clinics) were required to adapt recruitment procedures to local circumstances at each site.

A standardised interviewer-administered questionnaire was used to collect data on socio-demographic factors, stroke and diabetes history, past ocular history, and eye care service history. Examiners asked participants whether they had ever been told by a health practitioner that they had cataracts, whether they had ever undergone cataract surgery, and on which eyes and how long ago (in years and months). A trained examiner then performed a series of eye tests, including visual acuity measurement with pinhole and auto-refraction in those with visual acuity (VA) worse than 6/12, anterior segment assessment, intraocular pressure testing, perimetry, and fundus photography. VI was defined as bilateral presenting visual acuity (PVA) worse than 6/12, measured with a logMAR chart at 3 metres. Participants with VI in either or both eyes had anterior segment photographs of the impaired eyes taken with a Digital Retinography System (DRS) camera (CenterVue) to determine whether vision loss was caused by anterior segment pathology. Verbal feedback about test results was provided, and participants were referred to a local doctor or optometrist if abnormalities were detected.

Two graders independently assessed anterior segment photographs and fundus photographs taken with a DRS camera to categorise participants into one of three groups: no cataract; probable cataract; or definite cataract. High inter-rater reliability (85%) and intra-rater reliability (94% and 96%) were achieved. Discrepancies were adjudicated by an ophthalmologist. In cases where photographs were unavailable, a cataract grade was assigned on the basis of an anterior segment examination by a trained clinician using a handheld slit lamp (Keeler Ophthalmic Instruments). Participants with probable or definite cataract were deemed to have cataracts for the purposes of this study.

Cataract surgery coverage rates were calculated with the formula:

Socio-demographic variables were assessed for participants who had undergone cataract surgery and for those with bilateral vision loss and unoperated cataract. For NEHS definition 1 and the WHO definition, coverage rates were disaggregated by age, sex, place of birth, language spoken at home (English v other), and geographic remoteness. Associations between cataract surgery and the following covariates were examined in multivariable logistic regression: Indigenous status, age, sex, education, language spoken at home, and geographic remoteness. Given the differences in inclusion criteria for Indigenous and non-Indigenous participants, regression was performed separately for each population. Adjusted coverage rates by age derived from logistic regression were plotted for Indigenous and non-Indigenous participants. All analyses were adjusted for sampling weights and non-response. Associations were deemed statistically significant if P < 0.05 (two-tailed). Stata 14.2 (StataCorp) was used for all analyses.

Geographic remoteness did not significantly affect cataract surgery coverage rates among non-Indigenous Australians, with high rates across all levels of remoteness (Box 2). Greater variation was observed in the coverage rates for Indigenous Australians, from 28% in Very Remote to 78% in Remote areas, although these differences were not statistically significant (Box 2, Box 3).

We have reported the cataract surgery coverage rates for Indigenous and non-Indigenous Australians across all levels of geographic remoteness in Australia, and identified socio-demographic factors associated with cataract surgery.

Cataract surgery coverage rates varied according to the definition applied. According to the WHO definition, rates were well above the 85% recommended by the International Agency for the Prevention of Blindness for both Indigenous (92.5%) and non-Indigenous (98.9%) people.8 However, the WHO definition is more relevant to developing nations where service availability is poor, rates of vision loss are high, and surgery is not routinely performed on people without profound vision loss. In Australia, cataract surgery is often performed on individuals with visual acuities better than or equal to 6/12,16 and it is therefore likely that a substantial proportion of the participants who had undergone surgery had better pre-operative vision than the 6/18 BCVA level in the WHO definition.

The NEHS definitions set 6/12 as the threshold VA level. This is consistent with the bulk of cataract surgery research in Australia, and also corresponds with the minimum legal sight requirement for driving a motor vehicle in Australia.17-20 NEHS definition 2, which uses BCVA rather than PVA, may be less relevant in the Australian context than NEHS definition 1, as patients with cataracts and corrected VA better than or equal to 6/12 may still undergo surgery;9 excluding these individuals from the denominator may therefore lead to overestimating population coverage rates. Consequently, NEHS definition 1, in which all participants with cataract and presenting bilateral VI were included in the denominator, is probably more apposite for analysis, policy formulation, and resource allocation in Australia. According to this definition, the coverage rate for Indigenous Australians is lower than appropriate.

The cataract surgery coverage rates for Indigenous people we determined were moderately higher than reported by the NIEHS for residents in Major City (63% v 57%), Outer Regional (57% v 50%) and Remote areas (71% v 67%), and moderately lower in Inner Regional areas (69% vs 82%). However, the NEHS rate of 30% for Very Remote communities is much lower than reported by the NIEHS (68%). As these two studies applied different definitions for coverage rates, these comparisons should be considered with caution. Considering the recent improvements in outreach eye health programs for very remote Indigenous communities,24 this difference in coverage is unlikely to represent a dramatic change in coverage in all Very Remote Indigenous communities. It probably instead reflects heterogeneity in service availability and uptake across Indigenous communities in the most remote parts of the country, as well as some sampling variation. We may have inadvertently sampled comparatively underserviced Very Remote communities, while the NIEHS may have sampled comparatively well serviced Very Remote communities. Given there were only ten Indigenous Australians in our Very Remote category, the 30% coverage rate found should be regarded with caution. Although this remoteness effect did not achieve statistical significance, such a low coverage rate is unacceptably low in any community, and future planning should identify underserviced Indigenous communities in the most remote regions of Australia and develop targeted interventions for improving cataract surgery rates in these areas. 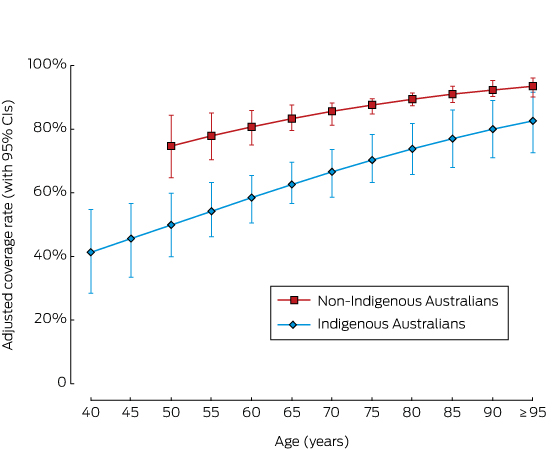 This study received funding from the Australian Government Department of Health and from Novartis. Neither was involved in any aspect of the research process.