The Specialty and Naughty/Nice Tendency Audit (SANTA): which medical specialists can be trusted to follow recipes?

Objective: To evaluate the influence of medical specialty on the likelihood of doctors making the Naughty or Nice lists this Christmas.

Design, setting, and participants: A quantitative observational study. Doctors in a medical parent Facebook group were asked about their specialty and their tendency to follow recipes.

Main outcome measures: Self-reported tendency to follow the recipe (always, sometimes, never) as an indicator of rule-breaking behaviour, extrapolated as indicating Naughty (unlikely to follow a recipe) or Nice (always follow recipes) tendencies, and consequently the likelihood of being included in the Nice list this Christmas.

Results: The majority of doctors in only 19% of specialties made the Nice list. When aggregated, 92% of surgical specialties reported that they either never followed recipes or did so only occasionally. Similarly, 80% of physician specialties reported being Naughty. In contrast, 50% each of those in critical care specialties were Naughty or Nice. General practitioners comprised the largest single group of respondents, and only 8% identified as Nice.

Conclusions: An overwhelming majority of medical parents were Naughty. As Santa makes his list and checks it twice, he will find out who is Naughty or Nice, and he may be surprised at the number of doctors who are on the wrong side of the inventory. When Santa Claus comes to town, he should be circumspect when indulging in any baked offerings by the Christmas tree, particularly those offered by surgeons and general practitioners.

The known Personality is thought to influence choice of medical specialty; it is also likely to influence whether a doctor tends to follow recipes or not. Santa expects food offerings beside the Christmas tree.

The new Most doctors do not follow recipes, despite admitting that the results are often less than desired.

The implications Santa will be disappointed by the quality of food offerings beside the Christmas trees of medical practitioners.

Each year Santa Claus prepares a list of those who are Naughty or Nice, and we thought to assist him with this sizable chore. Our study sought to determine whether doctors of certain specialties always make the Naughty list or the Nice list.

Recipes are essential for preparing food of consistent quality,2 and Santa may glean an indication of the likely quality of the food left by the Christmas tree from information about whether the occupants of the home are Naughty or Nice. He sees you when you’re sleeping, he knows when you’re awake, and he also knows if you’ve been bad or good, so he should have no trouble determining whether residents are Naughty or Nice.

A prospective survey was conducted in March 2017 in which participants reported their medical specialty and whether they followed recipes or not (on a 3-point scale: always, sometimes, never). The complete survey text is included in Box 1. Participants were members of a Facebook social media group consisting exclusively of doctors who were also parents (medical parents); at the time of the survey, it included 5937 doctors from across Australia and New Zealand. Participants were informed that this was a voluntary participation study, and that the de-identified data would be analysed for a publication. Participants who followed recipes were categorised as Nice, while participants who often or never followed recipes were categorised as Naughty.

The main outcome was the (indirectly) self-reported Naughty or Nice tendency, and this was compared with the reported medical specialty.

While the survey asked whether a recipe was followed or not (ie, yes or no), some respondents indicated that they followed the recipe on some occasions and not on others. The most common excuses included (mostly) following a recipe on the first attempt at preparing something, and (usually) following a recipe when baking, but not at other times. The “follow sometimes” responses were too few to analyse separately and were included among the Naughty responses.

A total of 485 out of 611 respondents (79.4%) identified as Naughty by responding that they only sometimes or never followed a recipe.

As the number of respondents from each medical specialty varied, Naughty and Nice tendencies were analysed by specialty. All participants from dermatology, clinical genetics, and nuclear medicine identified themselves as Nice, whereas every respondent from cardiothoracic surgery, ear, nose and throat surgery, oral surgery, vascular surgery, plastic surgery, surgical assisting, neurosurgery, radiation oncology, general medicine, cardiology, immunology, and occupational health was Naughty (Box 2).

The specialties were finally grouped into surgical, critical care, and physician categories (Box 3). General practitioners were included in the physician group, as they had a similar Naughty and Nice profile to others in the group. When we analysed these three categories, we found that 50% of doctors in critical care, 80% of those in the physician group, and 92% of those in the surgical specialties were Naughty.

In surgical specialties, there is the concept of “see one, do one, teach one” with regard to surgical procedures.3 Applied to cooking, it is no wonder that most surgeons do not follow recipes, or may only follow a recipe initially but not afterwards, given that the “do one” is often not the same as the “see one”.

A common comment by those who indicated they were Naughty was that they preferred to “wing it” when it comes to cooking. One respondent said they “intended to follow the recipe, but often added, substituted, or became lazy, or perhaps just think I know better than Stephanie Alexander.” Another admitted they “couldn’t be bothered measuring exact amounts.” One opined that they “tried to stick to the recipe the first time, but then let loose on repeat attempts, often with disastrous results.” This appeared to be a common theme: the results of “winging it” were more often than not less palatable than desired. Poor results, however, did not alter the fact that most practitioners in 34 of 42 specialties (81%) continue to be Naughty.

The specialty providing the greatest number of respondents was general practice, and an overwhelming majority of these doctors (92%) were Naughty. One general practitioner commented that this was characteristic for their specialty, perhaps implying that the nature of general practice required a similar approach of “winging it”. This may be another area for further research.

One limitation of our study was that the participants were all medical parents. Our findings may not apply to doctors who are not parents, or to parents who are not doctors. Interpretation is also limited by the small numbers of respondents in some specialty groups, which may limit the generalisability of our findings.

For Santa this Christmas: he better watch out, he better not cry, he better not shout, and we’re telling him why. Most doctors are Naughty and think they can “wing it” when cooking. But we implore Santa to consider the Nice that they do at work, and suggest that it may compensate for their culinary sins. We would, however, also advise caution when trying the food beside the Christmas tree.

Box 1 – The text of the study survey

When using a recipe, do you usually follow it exactly (stated amount, stated method) or not (throw in approximate amounts, tweak things), especially when using a recipe for the first time? Please also state your specialty and procedural. If the results are interesting enough, I’ll try to publish them in the MJA Christmas edition! Thanks for participating in the SANTA (Specialty And Naughty/Nice Tendency Audit) study.

Box 2 – Participation of medical parents in the survey, by specialty, and allocation of specialty to Naughty and Nice lists (based on 50% or more of the specialty identifying as Nice) 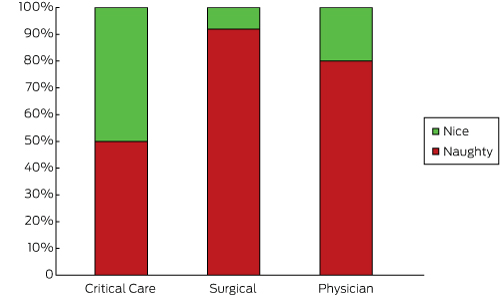