Objectives: To assess differences in the rates of angiography and subsequent revascularisation for Aboriginal and non-Aboriginal South Australians who presented with an acute coronary syndrome (ACS); to explore the reasons for any observed differences.

Design: Analysis of administrative data with logistic regression modelling to assess the relationship between Aboriginal status and the decision to undertake diagnostic angiography. A detailed medical record review of Aboriginal admissions was subsequently undertaken.

Conclusions: After controlling for age and other factors, the rate of coronary angiography was lower among Aboriginal patients with an ACS in SA. The reasons for this disparity are complex, including patient-related factors and their preferences, as well as the appropriateness of the intervention. Improved consideration of the hospital experience of Aboriginal patients must be a priority for reducing health care disparities.

The known Disparities in the treatment of Aboriginal and non-Aboriginal patients hospitalised with acute coronary syndromes have been reported.

The new After adjusting for age and other factors, Aboriginal status was independently associated with lower coronary angiography rates. Angiography was more likely if family members or Aboriginal liaison officers were present. Revascularisation rates and prescription of medical therapies were similar for Aboriginal and non-Aboriginal patients who had undergone angiography.

Given the extent of the inequalities related to cardiovascular disease, there is clearly a need to identify and overcome problems that contribute to these health disparities. To expand knowledge in this area, our study examined the in-hospital management of Aboriginal people with an ACS, focusing on explaining these disparities. Our aims were: (i) to assess differences in the rates of angiography and subsequent revascularisation for Aboriginal and non-Aboriginal South Australians presenting with an ACS, taking into account age and other factors; and (ii) to explore the reasons for any disparities by undertaking a detailed review of individual hospital admissions.

Establishment of the expert working group

Following the release of Better hospital care for Aboriginal and Torres Strait Islander people experiencing heart attack,6 it was recognised that contemporary SA-specific data were required for evaluating disparities in care in this state. Consequently, the Heart Foundation in SA, in collaboration with the SA Health Cardiology Clinical Network, established a research team to provide the data. The project was overseen by an expert working group with representation from the research team and each SA Health local health service, as well as Aboriginal health professionals.

To investigate differences in diagnostic angiography and revascularisation (PCI/CABG) rates in Aboriginal and non-Aboriginal people, hospital admissions for ACS to all South Australian public tertiary facilities, with separations between 1 January 2007 and 31 December 2012, were obtained from the Integrated South Australian Activity Collection (ISAAC). ISAAC records are coded using International Statistical Classification of Diseases and Related Health Problems, 10th revision, Australian modification (ICD-10-AM) codes. All records were based on separations (episodes of care) rather than individual patients. Records were included in the analysis if the principal diagnosis was AMI (ICD-10-AM, I21.x) or unstable angina (I20.x) and the admission was recorded as an acute episode of care with casualty/emergency department as the source of referral. To avoid contamination of the dataset, records for interhospital transfers were excluded. Records in which Indigenous status was not stated or was inadequately described were also excluded.

To further examine the in-hospital management of Aboriginal patients with an ACS, a chart review was undertaken, using 1:1 matching and a standardised case report form. The hospital medical records for each separation recorded in the administrative data of patients who were identified as Aboriginal or Torres Strait Islander were extracted. They were matched as closely as possible with the next admission to the same hospital of a non-Aboriginal patient of the same age (within 10 years) and sex, and with the same principal diagnosis. Documentation of the medical decision-making process about whether the patient received invasive management was also reviewed; influences on this process were categorised as clinical or non-clinical (ie, patient-related factors).7 Data quality for the chart review was ensured by using trained abstractors and record re-abstraction for 10% of cases. Training included a detailed data dictionary and coding instructions, a testing phase with training examples, and individual education sessions on site before and during data collection.

Age at admission (mean, standard deviation) for Aboriginal and non-Aboriginal patients was compared with the Student t test. Comparisons of categorical endpoints for Aboriginal and non-Aboriginal patients are presented as percentages, and were assessed by logistic regression. Unadjusted and age-adjusted comparisons are reported as odds ratios with 95% confidence intervals (CIs). The primary outcomes included receiving diagnostic coronary angiography and, for patients for whom angiography was performed, PCI and CABG rates. To explore the association between invasive management and Aboriginal status, logistic regression models were fitted for each outcome. Modelling commenced with fully saturated models that included Aboriginal status and all remaining predictors with P < 0.20 as factors; non-significant variables (P ≥ 0.05) were then systematically removed from the models.

Clinical outcomes for Aboriginal and non-Aboriginal patients are presented as percentages and compared by logistic regression as described above. Symptom duration in minutes (median, interquartile range [IQR]) was compared with the Wilcoxon rank-sum test. The primary outcome in the chart review was the prevalence of clinical and non-clinical factors associated with non-invasive management; outcomes for the two groups were compared by logistic regression, with unadjusted and age-adjusted results reported.

After adjustment for age, the odds of Aboriginal patients undergoing PCI were significantly lower than for non-Aboriginal patients (Box 2). The between-groups odds ratios for undergoing CABG were significant in neither the unadjusted nor the age-adjusted analyses. However, when the analysis of interventional procedures was restricted to patients who underwent coronary angiography, PCI rates for Aboriginal and non-Aboriginal patients were similar, as were those of CABG and revascularisation overall (Box 2). For admissions that included a coronary angiogram, multivariable models assessing independent predictors of revascularisation (PCI, CABG) did not find an association with Aboriginal status.

At discharge, the prescription of guideline-recommended therapies for AMI patients was similar for Aboriginal and non-Aboriginal patients (Box 6). Regardless of Aboriginal status, secondary prevention therapies, including aspirin, β-blockers and cardiac rehabilitation referral, were prescribed significantly less frequently for those who did not undergo coronary angiography than for patients who did (Appendix 3).

The lower age-adjusted odds of Aboriginal patients undergoing diagnostic angiography is concerning, but consistent with previous reports of lower rates of cardiac intervention in national5 and state-based datasets.10 Similar rates of CABG, but not of PCI, among Aboriginal and non-Aboriginal patients have been described.10 We, however, found similar rates of PCI for the two population groups; the reasons for this difference are unclear, but may include advances in PCI technology11 that have expanded the range of Aboriginal patients who can be treated with this intervention. Unlike other studies, we also undertook a restricted analysis of revascularisation rates that included only admissions where a diagnostic angiogram had been performed, thereby differentiating different sources of disparity; this analysis indicated that the major difference involved the decision about diagnostic angiography. Research in the United States exploring racial disparities in treating CHD also found that the greatest disparity was the referral to angiography.12,13

To further examine the causes of the disparity in angiography rates, we undertook a medical record review of all Aboriginal ACS admissions in the hospital data, matched with data for a non-Aboriginal cohort. This information provided insight into the medical decision-making processes for Aboriginal ACS patients and confirmed that a negative hospital experience, bias based on complex comorbidities or presumed adherence to medications that favoured conservative management, and patient choice were implicated in the difference in angiography rates.6,14,15

In 56% of cases in which Aboriginal patients did not undergo angiography, the decision was attributed to patient-related factors or no clear justification was provided, compared with 17% for non-Aboriginal patients. The rate of discharge against medical advice was high among Aboriginal patients who did not receive angiography (10.5%). This raises concerns about barriers to quality care for Aboriginal people, including poor engagement and communication, a lack of coordinated care, and inadequate cultural competence of health care providers.16,17 All of these factors can result in isolation, fear and disengagement by the patient.9

The importance of shared discussions and cultural support structures is highlighted by our findings, as Aboriginal patients who arrived at the hospital with an escort (family member or friend) were more likely to undergo angiography. Encouraging shared decision making and enabling systems that support a companion during the hospital stay are crucial for improving Aboriginal health care.14 Our data also strongly support the involvement of Aboriginal liaison officers, as their presence was associated with an increased likelihood of angiography. Although we cannot presume a direct causative relationship, these interactions are understood to improve communication and coordination, and to assist in alleviating fear.17

It has previously been reported that Aboriginal people with symptoms suggestive of a heart attack may delay presenting to a hospital.9 However, our findings suggest this situation may be improving, as symptom duration at hospital presentation was similar for Aboriginal and non-Aboriginal patients. Strategies that target early response and action may now be having an impact, with a number of culturally appropriate health resources and education tools available to patients and health care providers.

The major limitations to our study were that the data were drawn from one Australian state, and that the assessed records were based on hospital separations rather than individual patients. Further, patients receiving care in non-tertiary facilities were not included in our analysis. An evaluation of these patients, with a particular focus on comparing patients who were subsequently transferred with those who remained in a non-catheterisation facility, would be desirable. Our investigation could thus be strengthened by broader population coverage and by using linked data.

Our study provides important insights into the in-hospital treatment of Aboriginal patients with an ACS. We found a significant health disparity in the rates of coronary angiography for Aboriginal and non-Aboriginal patients that is not explained by the frequency of complex comorbidities in these populations. Hospitalisation for acute cardiovascular care can be distressing, and for Aboriginal patients this problem is compounded by limited understanding by health care workers of factors influencing Aboriginal health, leading to miscommunication that may reinforce negative perceptions, patient disengagement, and fear. In our study, engagement with the patient’s family and care facilitated by Aboriginal liaison officers each had positive impacts. While there are other contributing factors to disparities in treatment, health care workers and systems that facilitate a constructive hospital experience will improve the ability to provide effective care for Aboriginal patients. 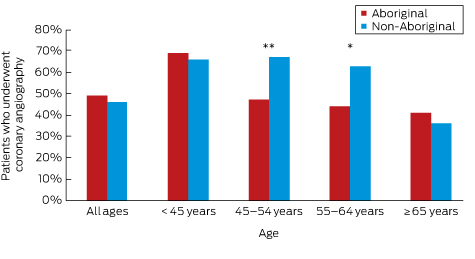 Box 4 – Age-adjusted comparison of Aboriginal and non-Aboriginal patients with acute coronary syndromes who underwent coronary angiography, based on chart review data, according to guideline risk stratification 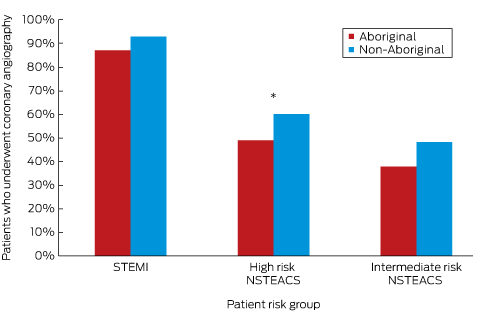 We acknowledge the funding provided by the National Heart Foundation (South Australian Division) for the case note review, and the detailed work of the case note reviewers at Royal Adelaide Hospital, the Queen Elizabeth Hospital, Lyell McEwin Hospital and Flinders Medical Centre. We acknowledge the contribution of knowledge by the Aboriginal Workforce and Cardiac Coordination Advisory Panel. We are grateful for ongoing advice and guidance throughout the project by representatives of the Council of Aboriginal Elders of SA, the Aboriginal Health Council of SA, and the SA Aboriginal Health Partnership. We acknowledge the ongoing support from SA Health data custodian Tina Hardin.

Alex Brown, Katharine McBride and Wendy Keech are working on a project commissioned by SA Health, the “State of Aboriginal Heart Health”, that includes the development of an SA Aboriginal heart and stroke plan. Through this project, they have access to SA Health hospital data.