Design, setting and participants: All people diagnosed with colorectal cancer in NSW during 2001–2007 were identified and their cancer registry records linked to hospital admissions data and death records. A medical records audit of a sample of Aboriginal people diagnosed with colorectal cancer during 2000–2011 was also conducted.

Previous studies of colorectal cancer survival in New South Wales,1 South Australia,2 Queensland3 and the Northern Territory4 have found that survival tended to be poorer for Aboriginal than for non-Aboriginal people. These studies identified disease factors and less access to primary and follow-up treatments as possible reasons for the survival disparities.

The recommended treatment for colorectal cancer is generally surgery combined with adjuvant chemotherapy or radiotherapy, depending on the cancer type and extent of disease.5,6 Treatment guidelines also highlight the importance of post-surgical follow-up care, as one in three people will die from disease recurrence after initial treatment.3 However, the Australian guidelines available during the study period for this article did not describe a specific protocol for follow-up care.5,6

We respectfully use the descriptor “Aboriginal people” throughout this report to refer to the original people of Australia and their descendants.

We analysed two different linked datasets, both of which have been described previously:7,8 data from the NSW Population-wide Study (2001–2007) and data from the Patterns of Care study (2001–2011). The NSW Population-wide Study data comprised incident cancer cases linked with hospital separations data and death records; the Patterns of Care study data comprised information collected in an audit of medical records of Aboriginal people with colorectal cancer (diagnosed during the period 2000–2011) linked to incident cancer cases, hospital separations data and death records. People were eligible for inclusion in the study if they were NSW residents diagnosed with primary colorectal cancer (International Classification of Diseases, revision 10, topography codes C18–C20, and International Classification of Diseases for Oncology morphology codes ending /3) and 18 years or older.

Demographic and disease information for all eligible people diagnosed with colorectal cancer during the period 2001–2007 was obtained from the NSW Central Cancer Registry. Cases were matched by the Centre for Health Record Linkage (CHeReL) with inpatient records from the NSW Admitted Patient Data Collection (APDC), death records from the NSW Registry of Births, Deaths and Marriages, and coded causes of death in Australian Bureau of Statistics (ABS) data. A person was determined to be Aboriginal if they were identified as Aboriginal in any of their linked records.

Information from the Clinical Cancer Registry included month and year of diagnosis, age at diagnosis, and spread of disease at diagnosis (reported as localised, regional, distant, or unknown). Cancers were also categorised by site (colon, rectum, or rectosigmoid junction).

Using the Accessibility and Remoteness Index for Australia (ARIA+),9 the Local Government Area (LGA) of residence of participants at diagnosis was categorised as major city, inner regional or rural (“rural” comprising outer regional, remote, and very remote). The LGA of residence at diagnosis was also assigned to a quintile of socio-economic disadvantage according to the Index of Relative Socio-economic Advantage and Disadvantage.10

We restricted our analysis to surgical treatment, both planned and emergency, as other studies have shown a high concordance between surgery recorded in the APDC and clinical audits of medical records.11

Comorbidities were any non-cancer conditions described in the Charlson Comorbidity Index12 that were recorded for any hospital admission in the 12 months before and the 6 months after diagnosis with colorectal cancer. People not admitted to hospital during this period were recorded as having “no comorbidity information available”.

Analyses were performed with SAS 9.2 (SAS Institute) and R 3.0.0 (R Foundation for Statistical Computing). We used Pearson χ2 tests to compare demographic data for Aboriginal and non-Aboriginal people. Logistic regression was initially used to compare the unadjusted odds of Aboriginal and non-Aboriginal people having surgery within 12 months of diagnosis. We then fitted a multivariable model by adding the variables sex, age at diagnosis, year of diagnosis, site of cancer, spread of disease, comorbidities, socio-economic disadvantage, and place of residence.

Colorectal cancer-specific survival was analysed with cumulative incidence curves and Cox regression models. Follow-up was censored at 31 December 2008 for all people whose deaths were not recorded. People who died from other causes were censored at the date of death. Variables were entered into the model described above, with the addition of surgical treatment as a variable. We included the statistically significant interaction between surgery and Aboriginal status in the final model. The proportional hazards assumption for Aboriginal status was satisfied in the final model.13

The probabilities of having a colonoscopy between 3 months and 3 years post-surgery were estimated for Aboriginal and non-Aboriginal people with localised or regional spread at diagnosis using cumulative incidence curves, with the competing risk of death without a colonoscopy included in the analysis.14

The information collected from 23 public hospitals and three clinical cancer registries included age, sex, year of diagnosis, spread of disease, postcode of residence, and comorbidities. Postcode of residence was used to assign quintiles of socio-economic disadvantage10,15 and ARIA&plus; category.9 Treatment information (surgery, chemotherapy and radiotherapy) included start and end dates, and reasons for incomplete or no treatment. We merged data for people who attended several hospitals, and data were checked for appropriate ranges of responses and any anomalies.

Compared with the Aboriginal people recorded in the NSW Population-wide Study data, the 145 Aboriginal people with colorectal cancer whose medical records we reviewed were, on average, younger at diagnosis (median age, 61 years), more likely to live outside major cities, and less likely to have been diagnosed with rectal cancer (Box 2, Box 7). As the two samples overlapped, formal statistical comparisons could not be made.

We found that the 5-year survival rate was lower for Aboriginal people in NSW with colorectal cancer than for non-Aboriginal people, despite their being, on average, younger at diagnosis and having a similar spread of disease, similar surgical treatment rates, and similar times to surgery. This disparity in survival was evident from 18 months after diagnosis, and was largely confined to those who had received surgical treatment, although we found no differences in post-surgical complications or in the 3-year rates of follow-up colonoscopy. We also found that the Aboriginal people in our POC data received adjuvant chemotherapy and radiotherapy at levels similar to those reported in a previous population-based survey of colorectal cancer care in NSW16,17 and in a more recent analysis of node-positive cases.18

The survival disparity was only observable from 18 months post-surgery, suggesting that Aboriginal people may have had higher rates of disease recurrence, recurrence that was not identified because of poorer follow-up, lower rates of follow-up colonoscopies to detect new tumours, or lower rates of adjuvant therapies. However, we observed no significant differences (when compared with non-Aboriginal people) in planned or emergency post-surgical admissions, or in the receipt of adjuvant therapies, and no differences in the rates of colonoscopy up to 3 years after surgery. Alternatively, the observed difference in mortality between Aboriginal and non-Aboriginal people may be due to differences in the proportions of people with microsatellite unstable tumours or to other tumour characteristics; information in this regard, however, was not available for this study.

As we found that Aboriginal people with colorectal cancer had poorer survival outcomes than non-Aboriginal people, but no obvious differences in the treatment or follow-up they received, it is plausible that small differences and delays along the treatment pathway, perhaps caused by cultural barriers, contribute to lower survival. This has been found for Māori people accessing chemotherapy for stage III colon cancer in New Zealand.19

Qualitative research on the health care received by Aboriginal people with cancer20 has identified several cultural barriers that may contribute to delays in their accessing mainstream health services (such as follow-up colonoscopies), including feelings of fatalism, shame, and embarrassment about colorectal cancer. More recent studies have identified lower health literacy,21 feelings of social exclusion when in hospital,22 and health services not fully responding to cultural differences as potential barriers to optimal care for Aboriginal people.23

Our analysis of the NSW Population-wide Study data is the first to include detailed information about the influence of comorbidities on surgical treatment and survival for Aboriginal people with colorectal cancer. However, it does have some limitations. First, the identification of Aboriginal people is dependent on correct recording of their status in the source datasets. As 98% of the Australian population is non-Aboriginal, the chance of positive misclassification is low, and we attempted to minimise under-identification of Aboriginal people by accepting any record of Aboriginal status in any linked record, including admissions not related to cancer. Second, using ABS information on deaths to identify Aboriginal people may have biased our survival results. In a sensitivity analysis we found, however, that using the APDC alone to determine Aboriginal status reduced the proportion of Aboriginal people who died from colorectal cancer within 5 years of diagnosis from 43% to 37%, and the overall survival patterns were similar to those reported here. Other potential sources of error include the possibility that we did not fully account for potential confounding factors that might contribute to the observed differences in survival, and measurement errors in the recording of covariates, such as comorbidities and spread of disease at the time of diagnosis. In addition, socio-economic disadvantage and place of residence were determined at the LGA level, and may thus be a source of measurement error. Further, although the POC data included more detailed information on the medical treatment of Aboriginal people with colorectal cancer than any other published study, the representativeness of the results may be limited, as we included only people from 23 hospitals and three clinical cancer registries. 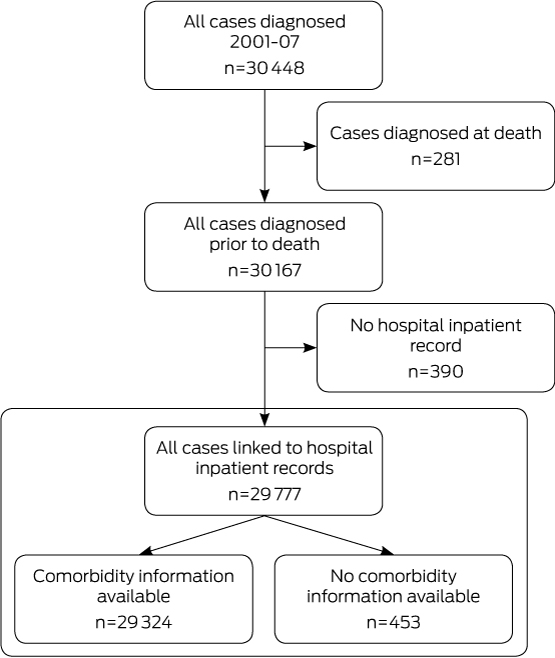 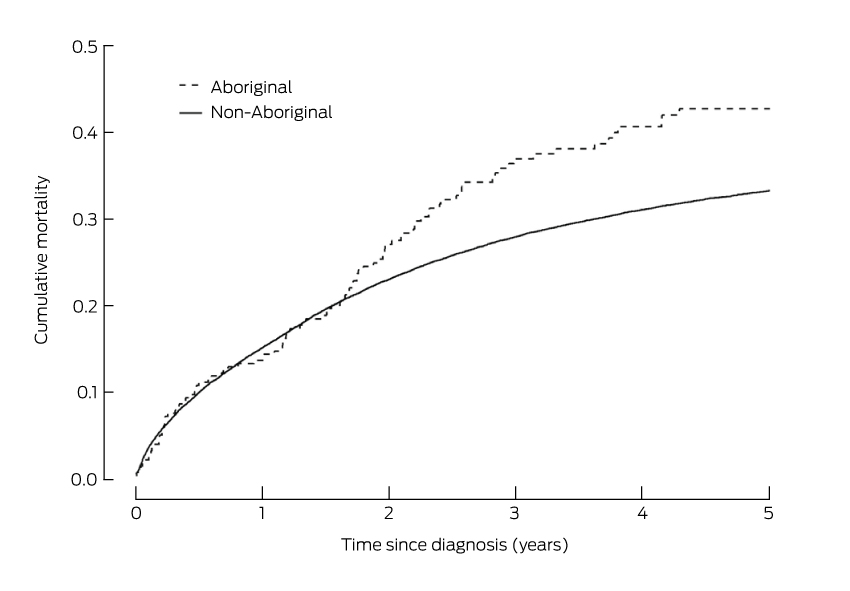 Box 4 – Mortality and hazard ratios for death from colorectal cancer for 278 Aboriginal people, compared with those for 29 499 non-Aboriginal people in New South Wales during 2001–2007 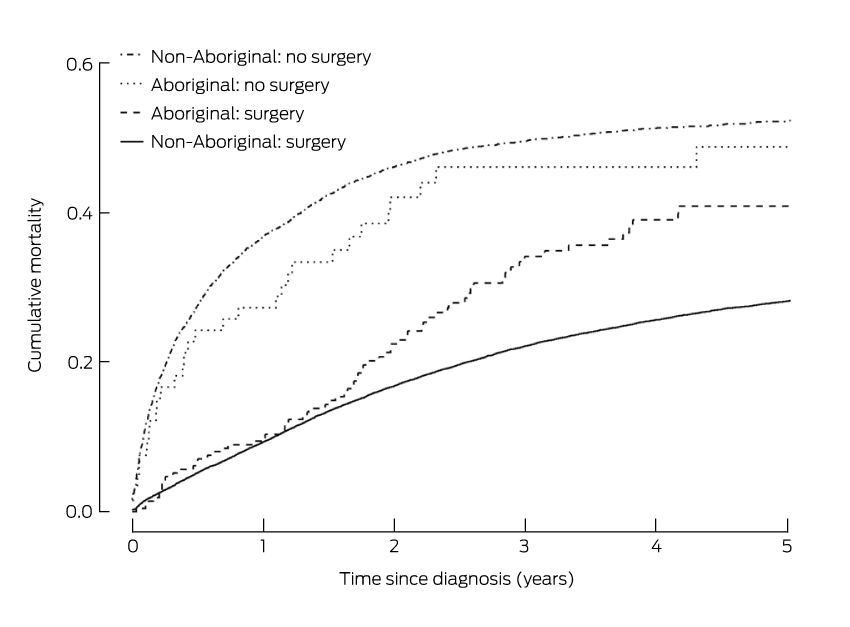 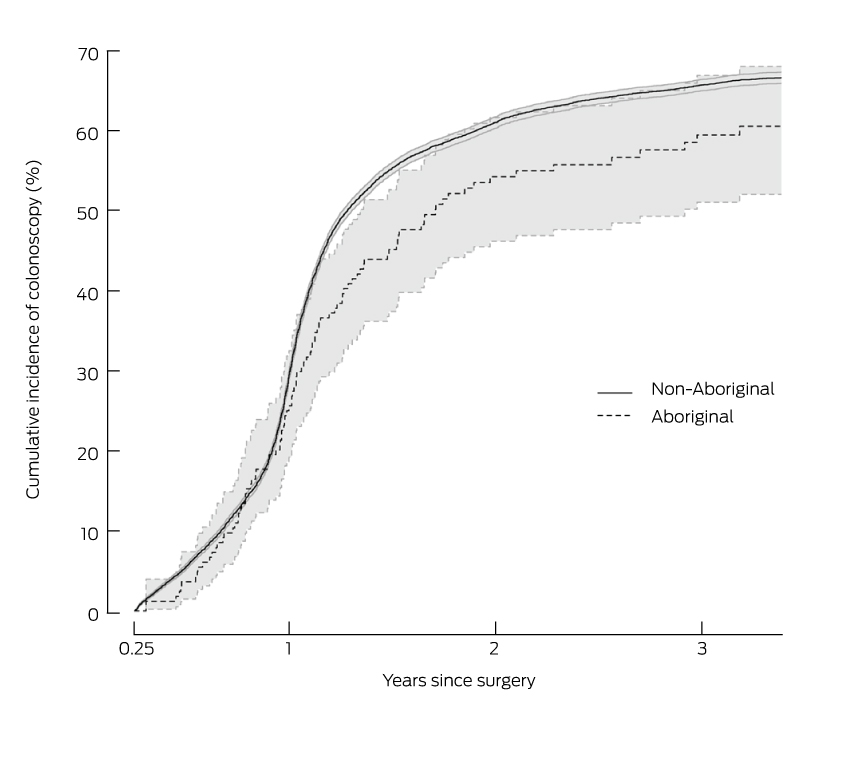 To the Editor: In the March 2016 issue of the Medical Journal of Australia,[1] the authors presented a thoughtful comparison of the surgical and survival outcomes for Indigenous and non-Indigenous Australians with colorectal cancer in NSW.
The article supports the current national statistics observing that risk of death for patients with colorectal cancer is higher for Indigenous Australians,[2] and was able to specify that it was not until 18 months post surgery that the disparity in survival emerged.[1] No discernible differences in the treatment and follow-up for Indigenous and non-Indigenous Australians were identified.[1]
A limitation of the study was the sole use of quantitative data sources (registries, inpatient health records and death records) combined with a conclusion identifying the primary health barrier to the survival disparity as ‘cultural barriers’.[1] The authors oblique definition for ‘cultural barriers’ echoes a deficit based approach to Indigenous health, focusing on negative contributing factors often associated with Indigenous Australians; health illiteracy, feelings of shame, fatalism and embarrassment.[1] The language utilised by the authors seems to place blame on Indigenous peoples rather than simply address an institutional barrier.
If the conclusions of the authors[1] are correct and more work is required to identify the actual health care barriers for Indigenous Australians with colorectal cancer, where do we look for this information?
While the digital collection and storage of health data on an ever-growing scale is currently being heralded as the answer for future innovations in oncology,[3] it is unlikely that ‘big data’, ultimately an extension of the data methodology utilised in the article by Weir,[1] will enable better health outcomes for Indigenous Australians.
Hopefully strength based projects like CanDAD (Cancer Data and Aboriginal Disparities Project)[4] will provide the relevant information required to discover what the actual health care barriers are and assist in the reformation of cancer care for Indigenous Australians.