How severe was the 2015 influenza season in Australia?

The answer depends on how much and which data one consults

Data were provided by the Australian Sentinel Practices Research Network (ASPREN), the Victorian Sentinel Practice Influenza Network (VicSPIN) and the Sentinel Practitioners Network of Western Australia (SPNWA). Together, these networks conduct Australia-wide surveillance of influenza-like illness (ILI; defined as cough, fever and fatigue). Participating general practitioners submit weekly reports on the number of patients presenting with ILI and the total number of consultations. Influenza polymerase chain reaction (PCR) test results of nose and throat swabs from ILI patients collated by ASPREN (a 20% systematic sample) and VicSPIN (selected at the discretion of the GP) were also available. Data were also provided by Flutracking, a national, weekly online survey of volunteers that can estimate the proportion of participants with ILI (defined as cough and fever, and/or the absence from normal duties). Notifications data are publicly available (http://www9.health.gov.au/cda/source/cda-index.cfm).

As shown in the Box, peak ILI rates in ASPREN, VicSPIN and Flutracking data during 2015 were not notably higher than during the preceding 5 years, and were similar to those of 2012. However, the percentage of positive PCR test results was lower in 2015 than in 2012. The peak ILI rate for SPNWA in 2015 was similar to the low peak of 2013. In contrast, cases of laboratory-confirmed influenza notified to the National Notifiable Diseases Surveillance System (NNDSS) increased by an average of 67% annually between 2010 and 2014, with a record 93 303 cases notified to 31 October 2015.

This discrepancy suggests that the increase in notified cases of influenza may be attributable to increased testing, rather than to increased morbidity. Medicare has reimbursed the costs of PCR testing since 2005, and public funding enabled the purchase of new PCR testing equipment after the 2009 influenza H1N1 pandemic; both developments facilitated increased routine influenza testing.3 A similar increase in notified pertussis cases was observed during 2008–2011.4 These data highlight the need for reporting negative laboratory results to calculate the proportion of positive influenza laboratory tests, and account for the effects of changing testing practices.5

Sentinel syndrome and laboratory surveillance data suggest that the magnitude of the 2015 influenza season was slightly higher than but nevertheless comparable with that of other post-2009 pandemic years. Increased media coverage that sensationalised the 2015 season, on the basis of notification data alone, was misleading. Interpretation of a season’s magnitude should draw on the multiple systems available that include data about community ILI, general practices, and emergency departments and hospitals. Selective use of data to motivate vaccination and other health-protecting behaviours in the population can mislead our health care professionals and compromise the community’s confidence in public health messages. 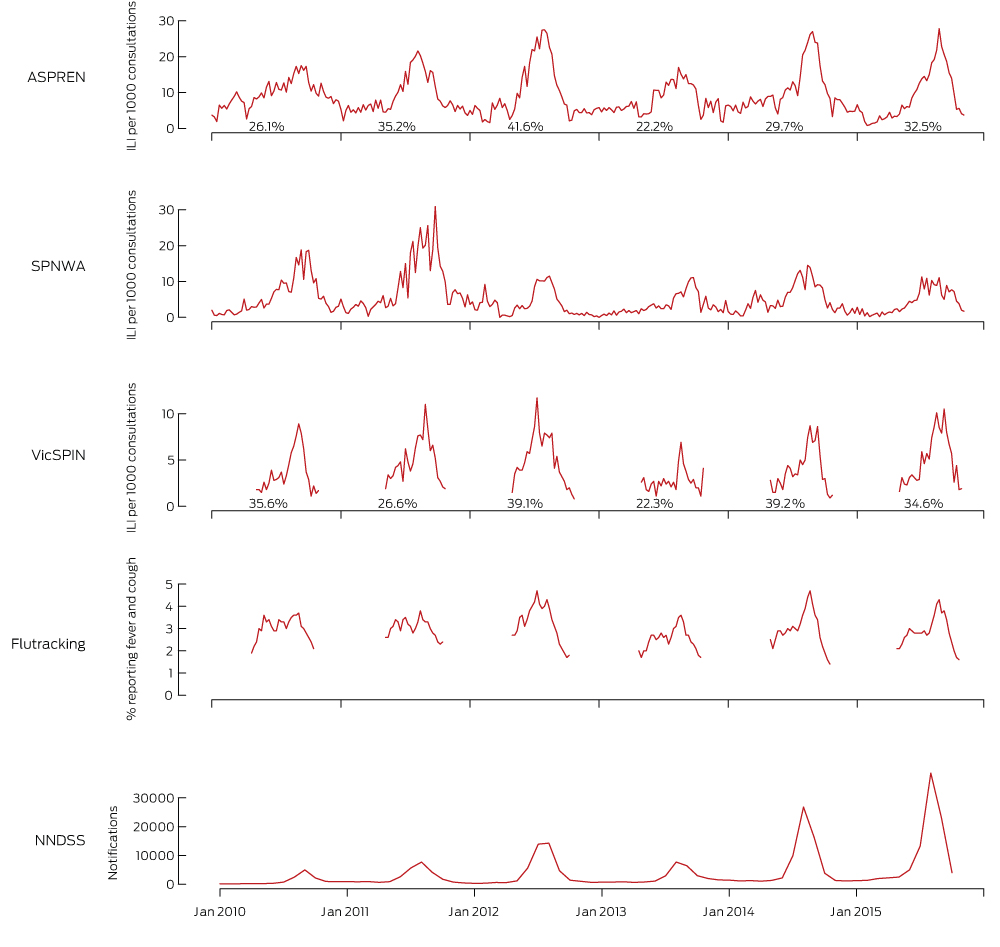