A 68-year-old man of European descent presented to our emergency department with rhabdomyolysis and acute-on-chronic kidney disease. He had a history of stage 3 chronic kidney disease (CKD3) — based on 17 tests in the year before this admission, his estimated glomerular filtration rate (eGFR) was 35 ± 7 mL/min/1.73m2 (CKD3: eGFR = 30–59 mL/min/1.73m2), his serum creatinine concentration was 179 ± 42 µmol/L (reference interval [RI], 60–120 µmol/L) — and of polyarticular tophaceous gout, type 1 diabetes mellitus, hypertension, ischaemic heart disease (coronary artery bypass grafting in 1998) and peripheral vascular disease.

His gout, diagnosed 13 years before this presentation, had been treated with allopurinol and then colchicine. Both, however, caused anaphylactic reactions. He had had multiple short courses of prednisolone to treat acute attacks on a background of naproxen. A month before this presentation, naproxen was withdrawn and treatment with a new hypouricaemic drug, febuxostat(40 mg daily) initiated. This drug was obtained through the Special Access Scheme of the Therapeutic Goods Administration. Two doses of febuxostat were withheld 12 days before this admission when he was admitted to hospital for 8 days with Haemophilus influenzae pneumonia and acute-on-chronic kidney disease, with his serum creatinine concentration peaking at 245 µmol/L. He was treated with intravenous ceftriaxone and azithromycin for 5 days, after which his renal function values had returned to baseline levels. He was discharged home and prescribed oral amoxicillin, which was to be continued for 5 days.

When he presented to our emergency department, the man was lethargic, oliguric, dehydrated and with acute-on-chronic kidney disease (serum creatinine concentration, 669 µmol/L; eGFR, 7 mL/min/1.73m2), but he was haemodynamically stable. There were no symptoms suggesting infection, and he was afebrile. Elevated serum creatine kinase activity (48 200 U/L; RI, 20–200 U/L) and the presence of myoglobin in his urine were consistent with rhabdomyolysis. The man was hyperkalaemic (potassium, 6 mmol/L; RI, 3.5–5.0 mmol/L) with tall T waves in his electrocardiogram; this responded to oral resonium and nebulised salbutamol. His serum creatinine concentration continued to rise despite intravenous hydration, peaking 48 hours after admission at 833 µmol/L (eGFR, 6 mL/min/1.73m2). His bicarbonate levels declined from 22 mmol/L to 15 mmol/L (RI, 24–31 mmol/L), reflecting worsening metabolic acidosis.

Febuxostat was considered to be the likely dominant precipitating factor and was withdrawn, as were simvastatin and gemfibrozil; he had used these two medications for 12 years, but febuxostat had only recently been prescribed. Further, application of the Naranjo adverse drug reaction (ADR) probability scale1 indicated that febuxostat possibly caused rhabdomyolysis in our patient.

Haemodialysis of the patient was commenced, and he had five cycles over the next 11 days. His renal function gradually returned to baseline (Figure). He was discharged on Day 23. Some months later, treatment with benzbromarone was started, a uricosuric drug that was also obtained through the Special Access Scheme. After taking benzbromarone for one-and-a-half months, his plasma urate concentration was 0.26 mmol/L (RI, 0.25–0.50 mmol/L).

Uncontrolled gout is a significant disorder because of the debilitating attacks of acute gout, the ensuing joint damage that causes pain, deformity and loss of function, and the organ damage involved, particularly renal dysfunction. The xanthine oxidase inhibitor allopurinol is an effective medication for reducing plasma urate concentrations to below 0.36 mmol/L, and this effect, if maintained, will almost always eliminate recurrent acute attacks of gout and the risk of joint and organ damage.2-4 As the active form of the drug is cleared exclusively by the kidney, the starting dose needed by patients with impaired renal function is lower.4 Risk of hypersensitivity, manifested as toxic epidermal necrolysis, is an uncommon but significant problem; a macular-papular rash is seen in as many as 2% of patients. These problems may be more common in those with impaired renal function or also using diuretic medications.5

There are alternative approaches for lowering urate levels in patients with hypersensitivity reactions. Uricosuric drugs, such as probenecid, are effective in patients with normal to moderately impaired renal function, but are not effective in those with severe renal impairment.6 Benzbromarone is a more effective uricosuric agent in individuals with renal impairment, but must be imported into Australia under the Special Access Scheme, as it is not registered in this country.7

The availability of a second xanthine oxidase inhibitor, febuxostat, is therefore welcome, especially for patients who do not tolerate allopurinol well. Febuxostat is registered in the United States and Europe, and was recently also registered in Australia (December 2014). The medication is generally well tolerated and dose adjustment is not necessary in patients with mild to moderate renal dysfunction. Liver function abnormalities and cardiovascular thrombotic reactions have been identified by postmarketing studies, but their incidence is very low. Only a few case reports have described hypersensitivity reactions. Cost is an issue, as febuxostat is more expensive than allopurinol, and should therefore not be the agent of first choice.

Rhabdomyolysis is noted as a rare side effect in the product information for febuxostat (following post-marketing experience), but there has only been a single published case report.8 In our patient, a serious additional decline in renal function was marked by substantially elevated creatine kinase activity, suggesting that rhabdomyolysis had caused this decline. It is likely that the concomitant statin and fibrate hypolipidaemic medications (ie, simvastatin and gemfibrozil) that the patient had taken uneventfully for several years contributed to his myositis. Dehydration associated with the patient's recent pneumonia probably also contributed to renal deterioration.

The options for reducing this patient's plasma urate levels — a critical goal, given his deteriorating renal function, progressive joint damage, and recurrent and severely painful acute gout — are quite limited. Febuxostat is now clearly contraindicated. Probenecid has limited efficacy when the glomerular filtration rate falls below 30 mL/minute. Benzbromarone, which is more effective than probenecid in patients with impaired renal function, can be obtained in Australia under the Special Access Scheme, and is a reasonable option. However, the patient's hepatic function would need to be carefully monitored, as the medication was withdrawn from the market in Europe and North America after rare reports of serious hepatic toxicity.7 Recombinant forms of uricase (such as rasburicase, pegloticase) would undoubtedly be effective in reducing urate levels, but repeated use would be prohibitively expensive; further, there is a risk of developing antibodies to pegloticase, which results in reduced efficacy and the possibility of adverse effects.9 Desensitisation to allopurinol, although complex, time-consuming and not without risk, also remains an option.10 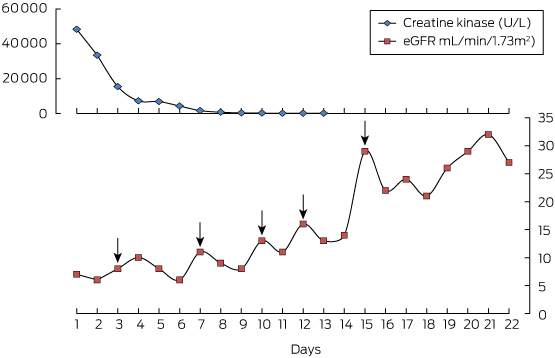 Time course of serum creatine kinase activity and estimated glomerular filtration rate (eGFR) in our patient. Arrows: Dialysis was undertaken on Days 3, 7, 10, 12 and 15.