Main outcome measures: For each NHPA, the total number of registered trials, planned recruitment, and the predicted numbers based on disability-adjusted life-years expressed as a proportion of the total burden of disease in Australia (%DALY).

Conclusions: Australian clinical trial activity for obesity and dementia interventions is lower that would be expected based on their relative disease burden. Trial registries provide a valuable public database to identify and monitor gaps in research activity.

Previous studies have reported a disparity between the level of National Health and Medical Research Council (NHMRC) grant funding for studies investigating NHPA conditions relative to their disease burden.2,3 The founding of clinical trial registries, including the Australian New Zealand Clinical Trial Registry (ANZCTR) in 2005, provides the first opportunity to examine how well clinical trial activity in Australia is targeted to NHPAs.

We conducted a retrospective analysis using ANZCTR and ClinicalTrials.gov (CT.gov) data to report on Australian trial activity and characteristics for NHPAs; and to compare the level of trial activity to the relative burden of disease for each NHPA.

Ethics approval was not required for this analysis of publicly available trial data.

Trial registration is voluntary in Australia.4

CT.gov is an online public registry of clinical trials maintained by the United States National Library of Medicine (https://clinicaltrials.gov). It records similar data items to the ANZCTR.

The trial sample included all trials of health-related interventions registered on the ANZCTR or CT.gov between 1 January 2008 and 31 December 2012 that included Australia as a country of recruitment. To avoid entering duplicate trial data, trials that listed a CT.gov or ANZCTR registration number as a secondary identifier were only included in the ANZCTR trial list.

To describe disparities in relative trial activity by NHPA, we identified NHPAs where the observed trial activity was less than 50% or more than 200% of expected values. The χ2 goodness-of-fit test was also used to test for statistically significant differences between observed and expected trial activity for each NHPA. For these analyses, a two-sided P < 0.006 was regarded as statistically significant using the Bonferroni adjustment for multiple comparisons (nine comparisons).

We also calculated the frequency distribution of trial characteristics for each NHPA. SAS, version 9.3 (SAS Institute) was used for data analyses.

The proportions of registered trials that investigated dementia or injury interventions were less than half those expected from their %DALYs (65/185 [35%] and 137/360 [38%], respectively; Box 1). The proportions of obesity and asthma trials were also lower than expected (195/386 [51%] and 68/123 [55%], respectively). In contrast, the proportion of registered arthritis and musculoskeletal diseases trials was about twice as high as expected on the basis of the %DALY (Box 1).

This study provides the first overview of clinical trial activity in Australia. We found that more than half of Australian registered intervention trials and planned trial recruitment are targeted to NHPA conditions.

Trial activity for cancer, cardiovascular diseases and mental disorders was high relative to other NHPA conditions, consistent with their position as the three major contributors to disability and premature death in Australia. In contrast, trial activity for obesity and dementia interventions was substantially less than the level expected from their contribution to the total DALY.

To interpret these results, the number of trials can be considered to provide a proxy measure for the number of active research questions being investigated to identify more effective interventions in each area. Planned trial recruitment provides a measure of the number of patients actively participating in research to determine best practice in each area.

These findings suggest there is a need to further examine research activity for obesity, dementia and asthma to determine if and how clinical trials research in these areas should be increased. However, this study does not allow us to define the optimum level of trial activity for each condition. Clearly, not all important research questions for NHPAs are amenable to investigation through clinical trials. For conditions where trial activity is already high relative to other disease areas, further increases may still represent good value for money by improving health care. For example, if promising new interventions are available; or practice variations or controversies exist with gaps in evidence to guide best practice. Conversely, for some conditions where trial activity is currently low, research priorities may warrant other study designs, such as those used in translational research or behavioural science, to develop new interventions.

This study also provides the first opportunity to assess the extent to which Australian trials are designed to provide robust, high-quality evidence for guiding practice. The use of randomisation and blinding provides a measure of trial quality; trial size provides an indicator of study power. Trials enrolling more than 100 participants are generally required to assess clinically meaningful health outcomes and to weigh up the benefits and harms of the new strategy, whereas smaller trials are generally designed to assess surrogate outcomes. About three-quarters of Australian trials used a randomised design; however, only around half reported blinding, or planned recruitment of more than 100 participants. These findings are slightly more favourable than those of a recent analysis of 79 413 intervention trials registered on CT.gov between 2000 and 2010, which reported that 70% used a randomised design, 44% used a blinded design and 38% enrolled 100 or more participants.7

One commonly raised concern about clinical trials research is the applicability of trial data to routine clinical practice populations and settings. Our finding that more than two-thirds of trials in NHPA areas did not exclude participants aged 70 years or older is encouraging.

The main strength of our study is that it provides a unique, timely overview of Australian clinical trials to inform current debate on the achievements, limitations and future directions for clinical trials research in Australia. Clinical researchers can use the same methods to further explore gaps for conditions within specific disease areas, as has been performed for cancer trials.8

There are two main limitations to our study that could affect our estimates of trial activity in different directions. First, we relied on trial registrations to estimate trial activity. As trial registration is not compulsory in Australia, we may have underestimated trial activity. Additionally, we only included international trials registered on the ANZCTR or CT.gov. A search using the WHO International Clinical Trials Registry Platform Search Portal (http://www.who.int/ictrp/search/en) showed that 11 096 of 11 412 (97%) trials with Australian sites are registered on these two registries. The total number of registered trials may therefore be 3% higher than our study estimate.

Second, our estimates of trial participation may overestimate the number of Australians participating in clinical trials, because 1622 of 5143 trials (32%) included sites outside Australia. Nevertheless, by including Australian sites, these trial recruitment figures capture participation in trials that can be expected to provide evidence relevant to Australian practice.

Despite these limitations, we believe our findings are valuable in informing initiatives to increase clinical trial activity.9,10 It is well documented that trial research is often not available to guide many routine clinical decisions about selecting interventions.11 To guide practice, large trials with adequate long-term follow-up are needed to identify small incremental improvements in health outcomes and/or adverse events. Our findings on trial size suggest that further efforts are needed to promote and support the conduct of large trials, or support the conduct of small high-quality trials that can later contribute data to meta-analyses.

Overall, we demonstrate the feasibility and value of using publicly available trial registry data to examine the profile of trials research for particular conditions and identify gaps in trial activity to inform trial initiatives. The ANZCTR provides a valuable resource for researchers to ensure new studies build on, or contribute to, existing trials.

1 Number of registered Australian intervention trials and total planned recruitment in National Health Priority Areas, as a percentage of total trial activity, and comparison to the expected number based on %DALY, Australian New Zealand Clinical Trials Registry and ClinicalTrials.gov, 2008–2012 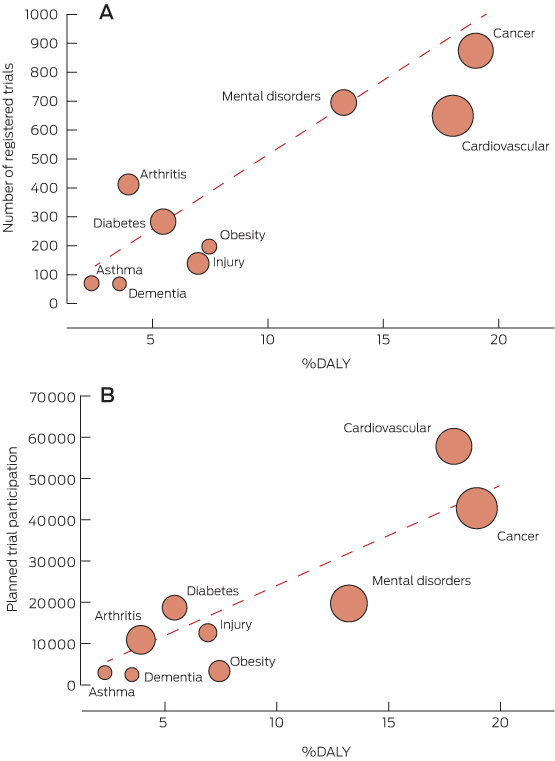 %DALY = disability-adjusted life-years expressed as a proportion of the total burden of disease in Australia.1 NHPA = National Health Priority Area.

Data are no. (%) unless otherwise specified. * Trials may be classified under more than one NHPA (eg, obesity and diabetes). † Includes trials that did not specify age limits.

The ANZCTR is funded by an NHMRC enabling grant, Therapeutic Innovation Australia, and the Health Research Council of New Zealand.

Lam and colleagues recently examined whether Australian clinical trial activity in National Health Priority Areas (NHPAs) reflect relative disease burden based upon 2003 estimates (1). They concluded that the proportion of registered Australian arthritis and musculoskeletal diseases trials is about twice as high as expected. We drew the opposite conclusion from our recent investigation, which included review of 191 registered musculoskeletal trials recruiting Australian participants in 2011 or 2012 (132 on the ANZCTR and an additional 59 on the WHO International Clinical Trials Registry)(2).

According to the WHO Global Burden of Disease (GBD) 2010 study, musculoskeletal conditions rank second after cancer (15.3% versus 16.2%), in their relative contribution to total disease burden in Australia (3). We therefore performed a reanalysis of the data presented by Lam et al., using the latest disease burden estimates from the WHO GBD study, which are publicly available as a series of data visualisations (4). Importantly, these estimates are continuously updated as further data become available.

We welcome Buchbinder and colleagues' reanalysis of Australian clinical trial activity for musculoskeletal conditions using updated estimates of relative burden of disease from the Global Burden of Disease (GBD) study. Using the Australian Institute of Health and Welfare (AIHW) 2007 burden of disease estimates, we found musculoskeletal trial activity did not fall outside our pre-specified boundaries of less than 50% or more than 200% of expected values for trial number or planned recruitment (1). Using the GBD 2010 estimates, musculoskeletal trial activity is 54% of expected for trial number and below 50% of expected for planned recruitment, ranking close to obesity and dementia as an area of need, with important implications for assigning research priorities as discussed by Buchbinder and colleagues. The GBD 2010 estimates also indicate the relative disease burden from obesity and dementia has increased over the last decade further supporting our original study conclusions for these conditions.

We hope the public availability of trial registry data will similarly encourage other researchers to explore research gaps in other disease areas to better inform research programs, policy makers, and funders about research priorities. Following our study period end date in December 2012 (1), over 3600 new trials with Australian sites have been added to the WHO International Clinical Trials Registry Platform (available at: http://apps.who.int/trialsearch) which receives weekly uploads from the Australian New Zealand Clinical Trials Registry and 15 other trial registries, allowing public access to up-to-date trial data.