Open speeds on Northern Territory roads: not so fast

Road safety should remain a public health priority, not a political issue

There are many possible factors contributing to this large discrepancy. Among NT road users, alcohol usage is high and seatbelt usage is low.2 Additionally, NT roads are almost invariably single lane and unseparated, many are unsealed, they are subject to the extremes of weather and are also exposed to wandering livestock and wildlife. Consequently, NT roads have attracted the lowest of Australian Road Assessment Program safety ratings, with over half having one and two stars out of five.3 The NT is unique in many ways and these differences threaten the survival of road accident victims. Road traffic is light and, as a consequence of this, victims may not be found for many hours after an accident. Hospitals and retrieval assets are sparse, resulting in prehospital times of many hours. The “golden hour” of trauma — that window immediately after injury when medical intervention can be life-saving — seldom exists for Territorians in remote areas.

Indigenous Australians comprise nearly 30% of the NT population, and most of these people live in remote areas. The risk of road trauma is magnified in these remote communities, as cultural and linguistic differences are a barrier for driver licensing and training and there is a paucity of public transport, and yet there are frequent cultural demands for short-notice mass transport.4

Before 2007, there was no speed limit on most NT highways, and drivers were free to travel at whatever speed they felt comfortable with. In 2007, in response to the high road toll, the NT Government introduced speed limits of 130 km/h on the four main highways and 110 km/h on other rural roads.5 Since then, differing political, professional and public opinions have been discussed frequently in the NT media. These speed limits were reconsidered in 2012, and the NT government made an election promise to conduct a review on the feasibility of reintroducing open speeds.6 The government commissioned reports from road safety experts, but this information remains cabinet-in-confidence. In February 2014, the NT Government reintroduced open speeds for a 200 km section of the Stuart Highway on a trial basis,7 despite voiced concerns from medical, policing and road safety groups. The response from the current NT Government to these concerns is to cite the role of fatigue, to emphasise the roles of alcohol and seatbelts, to deny that speed is a major factor in many crashes and to promote individual driver responsibility.7

The relationship between speed and a motor vehicle collision goes beyond the kinetic energy released being proportional to the product of mass and velocity squared. Researchers have developed several formulas to describe the multifactorial nature of road accidents, involving multiple variables; however, in each of these models, speed remains a decisive factor. An increase in vehicular speed increases crash risk either exponentially or to a power ratio.8 Modelling has suggested that the greater the difference in speed between two vehicles, the greater the crash risk for both the slower and the faster vehicle.8 The implications of a mix of open speed and speed-restricted vehicles, such as towing vehicles, heavy vehicles and probationary drivers, are obvious. Further, Australian and international case–control studies have shown that reducing posted speed limits by 10 km/h on rural roads decreases crash risk by 20%–25%. Multiple examples of this are included in the National Road Safety Strategy 2011–2020.9

What seems to be lacking in this debate is a dispassionate examination of the available evidence. Allowing individual motorists to drive to conditions seems optimistic and discounts that there will always be a cohort of inexperienced drivers. This policy seems to place blame on individual motorists, overlooking the conditions that increase the risks of fatal crashes. Higher vehicle speeds are promoted by lobby groups as a solution to reducing fatigue. While combating fatigue is important in improving road safety, swapping one risk factor for another is not the solution. Campaigns to combat drink driving and poor rates of seatbelt use are appropriate, but road safety is a package, and a vital element of the package is missing.

The small numbers involved make statistical interpretation difficult. The Australian road deaths database shows a decrease in fatalities of 3.4 per year on those NT roads with speed limits of 110 km/h and above after the abolition of open speeds (mean deaths: 2000–2006, 31.1 per year; 2007–2014, 27.7 per year).10 For every road death in Australia, 23 other people are hospitalised as a result of a road crash,9 which amplifies the potential societal benefit of any reduction in speed limit. Other legislative measures, infrastructure and trauma system improvements are likely to have contributed to this reduction, but attempting to minimise the role of speed in crash risk would seem unwise.

Trauma is too often considered an accident when it should be considered a preventable disease. We understand the causes and effects and we know, to an extent, how to prevent this trauma from occurring. Every crash is multifactorial, and alcohol and seatbelt use should remain a focus of a strong road safety package. However, allowing unlimited speed on major highways sends the wrong message to the NT population, especially when they are already three times more likely to die on the roads than people living in other parts of Australia, and at a rate that is equivalent to that in many low- and middle-income countries.11 The available evidence in the literature suggests that the piecemeal reintroduction of open speeds on the highways of the NT will eventually result in an increased number of fatalities and serious injuries. The NT Government should strengthen its road safety package and tailor it to the unique needs of its population, not abandon components due to popular demand. A comment from scientist Richard Feynman on the interplay between science and politics resonates here:

For a successful technology, reality must take precedence over public relations, for Nature cannot be fooled.

Comparison of annual road deaths per 100 000 population in the Northern Territory with the national total, 2004–2013* 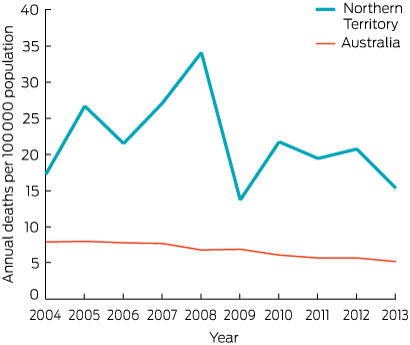 I acknowledge Christopher Gowing for his assistance in preparing this manuscript.

A very useful article on the 'no speed limits' policy being implemented by the current Northern Territory government. A commentary on the decision made to re-introduce open speed limits was published as a commissioned article in The Conversation in October 2013, see:
https://theconversation.com/goodbye-speed-limits-the-nts-risky-road-safety-strategy-19241.

Dr Read's article confirms the issues that I raised in this earlier article.

It is worthwhile, I think, to read through the published comments made in response to The Conversation article. I note, in particular, a comment by John Lambert earlier in 2015: "The fatality rate on this section of road [the part of the Stuart Highway subject to open speed limits] prior to the trial was around 2.5 - 3 times higher than would be expected on a rural road based on 272 km with 410 vehicles per day. Average deaths were 1.2 per annum and fatal crashes would have been around 1 per year. And the number of those 12 fatalities over 10 years expected to be due to inappropriate speed would have been around 3 so the fact the number was zero is statistically possible due to chance alone. Over the 11 months of the trial to date, the fact there has not been a fatality means absolutely nothing. What they need to be using is fatal plus serious injury crashes. And even then it would take at least three years before any finding of significance could possibly be made - if the variation in crash rates was low then it would take much longer."

Despite some publicised reports of excessively high speeds being reached (e.g., a driver taking a Porsche 918 hybrid sports car to 350km/h, Northern Territory News, April 15, 2015 12:00AM http://www.ntnews.com.au/news/only-in-the-territory/porsche-918-hybrid-sports-car-does-350kmh-on-stuart-highway-in-northern-territory/story-fnk2tg5d-1227303666639), it seems that most drivers are choosing to travel at the speeds they drove prior to the trial commencing. That is, drivers are electing to drive at 120-140 km/h in daylight conditions for light passenger vehicles, much slower for other vehicles and at night. To date, the Northern Territory government has not released any comparative speed distributions for the Stuart Highway section subject to the open speed limits trial, despite claiming the trial to have already been a success and announcing that planning is underway to open further sections of highways in the Northern Territory to the no speed limits policy.

Competing Interests: Over 2007-2009, Ian was, together with Professor Mark Stevenson and Professor Rebecca Ivers, appointed as the Northern Territory Road Safety Expert.

Thanks for great perspective Professor Read.
I'd like to draw attention to your statement:
"Allowing individual motorists to drive to conditions seems optimistic and discounts that there will always be a cohort of inexperienced drivers."
In fact the introduction of speed limits in the first place was because it is impossible for individual motorists to drive safely to conditions. The NT government is taking us back 70 years to an era before speed limits, in a time when there are cars that can drive 300km/h. Sadly it is people such as Professor Read himself as trauma surgeon, those who are killed on NT roads both local and visitors, and their friends and relatives, and all tax payers who pay for this childish policy.