Objective: To estimate the current and future prevalence of atrial fibrillation (AF) in the Australian adult population according to age and sex.

Main outcome measures: Estimated prevalence of AF in 2014 and future prevalence projected to 2034.

Conclusions: These data are indicative of a largely underappreciated AF prevalence in Australia. They mandate a more systematic effort to both understand and respond to an evolving AF burden.

Atrial fibrillation (AF) is the most common sustained cardiac arrhythmia observed in medical practice. It ranges in severity, from isolated and benign episodes of electrical disturbance to a chronic cardiac condition that results in cardiac remodelling and functional impairment. Typically, AF progresses from paroxysmal to more permanent forms, irrespective of management practices and intervention, leading to a significant and independent risk of thromboembolism, cardiac failure and mortality.1,2 AF also adversely affects patients' quality of life.3

AF has substantial economic impact, particularly due to AF-attributable stroke, the incidence of which is increasing in parallel with ageing populations as treatment remains suboptimal.

The evolving burden of AF has been influenced by a combination of population ageing, changing patterns of cardiac risk factors and improved survival rates in other, contributory forms of cardiovascular disease.1-5 As such, reports from high-income countries have demonstrated that AF exerts a major and evolving public health, social and economic burden.

Much of the current literature describing AF epidemiology reports on statistics calculated from data derived from North American and European populations6,7,11-14 and, more recently, from Asian populations.15 The number of affected individuals is projected to increase exponentially over the next four decades.7 Large population-based epidemiological studies assessing the burden of AF in Australia are yet to be undertaken. Of significance, a recent analysis of national data in Australia confirmed a 7.9% annual increase in hospitalisations due to AF (as a principal diagnosis), with around 45 000 hospitalisations attributable to AF per annum.16 These data provide further impetus to understand the underlying caseload of AF in Australia.

The primary objective of our study was to estimate the current prevalence of AF in Australian adults most commonly affected by AF (those ≥ 55 years) using robust and reliable population data and international prevalence statistics. A secondary objective was to further estimate the likely prevalence of AF in Australia over the next two decades to 2034 as the population continues to age and the natural history of AF, and therefore its prevalence, remains unchanged.

We have previously undertaken a comprehensive review of the epidemiology of AF in high-income countries.8 For our current analysis, we assessed seven international epidemiological studies identified in the review and collated statistics to obtain estimates of AF prevalence that would be most applicable to the Australian population.6,7,11-15 We used data from studies that provided the most comprehensive age- and sex-specific prevalence estimates (including 95% confidence intervals) for individuals aged ≥ 55 years. We included studies with a prospective study design that presented more recent data for relatively large samples of relative similarity to the Australian population and with a rigorous method for definitive diagnosis of AF (ie, confirmed by electrocardiography). The Rotterdam Study11 most explicitly fitted these inclusion criteria.

We obtained data representing the Australian population by single year of age as calculated on 30 June 2014 from the Australian Bureau of Statistics (ABS).17 Data for all individuals aged ≥ 55 years were combined into 5-year age brackets (except those aged ≥ 85 years, who were treated as one group). This was undertaken for the overall population and for each state and territory separately. We applied international AF prevalence statistics to each age group and to men and women separately. Ethics approval was not required for this research, as it involved the use of publicly available anonymised data and did not directly involve human participants.

We obtained population projections for 2014 to 2034 from the ABS based on the last census (2011) and representing annual data as at 30 June. These projection data represent the growth and change in the Australian population that would occur if certain assumptions about future fertility, mortality and migration were to prevail over the projection period.18 Projections for the total population and by sex were condensed into 5-year age groups (for people ≥ 55 years). Conservatively, we assumed that AF prevalence would remain stable from 2014 to 2034 and, therefore, the same prevalence statistics were applied. Three main series of projection data were available for use. We chose the series that largely reflects current trends in fertility, life expectancy at birth and net overseas migration.18 We also undertook a sensitivity analysis in which the upper and lower limits of prevalence CIs were applied to all data (Appendix 1).

Estimated prevalence of AF in 2014

Projected prevalence of AF in 2034

Appendix 2 also shows the projected number of affected individuals and prevalence of AF within each Australian state and territory in 2034. It is estimated that NSW will still have the highest number of individuals with AF (191 578), a 1.7-fold increase, but Queensland will have the greatest increase (from 61 613 to 123 142; twofold). All Australian states and territories are projected to have between 1.7–2.3 times the number of individuals with AF.

A steady increase in AF prevalence predicted between 2014 and 2034

Despite global recognition of an increasing burden of AF within the ageing populations of high-income countries,8,19 there is a paucity of data to quantify the number of Australians affected by this potentially deadly condition. Using contemporary population data and conservative estimates derived from robust international studies, we estimated that 5.35% of the adult population aged ≥ 55 years (5.97% of men and 4.79% of women) are currently affected by AF.

This proportion is projected to rise to about 1.2 times this value by 2034, to 6.39%. We predict that between 2014 and 2034 AF will continue to be more prevalent in older age groups and in men compared with women. Of all states and territories, NSW (being the most populous state) will experience the greatest increase in the number of cases (almost doubling, to just under 200 000), although the greatest increase in prevalence is expected in Queensland, most likely due to the ageing of an older resident population.

Overall prevalence of AF has risen substantially over recent decades, as shown by European, North American and Asian studies;6,7,11-15 however, there have been no contemporary large-scale, population-based studies conducted to determine AF prevalence in Australia. The last prospective Australian study collecting data specifically on the burden of AF was conducted in Western Australia between 1966 and 1981.20 Therefore, the contemporary epidemiological profile and cost burden of AF in Australia cannot be specifically described.

Data from the our report contribute to exploring the size of the AF burden, reflecting global observations of prevalence, including sex and projection patterns. Reported AF prevalence is higher in older individuals, illustrating the influence of ageing; and prevalence in men remains consistently higher than in women, although absolute numbers of affected women are greater.

Our recent pooled analysis of international population data suggests that the prevalence figure (in the adult population ≥ 20 years) is likely to be between 2.5% and 3.5%,8 supporting the prevalence estimates presented here. Studies have confirmed that the prevalence of AF in community-based studies ranges between 0.1% and 4.0%9 in individuals aged ≥ 15 years and that overall prevalence of AF in Sweden was 3.0% (3.4% in men and 2.6% in women) in 2010.10 The two previous studies assessing AF prevalence in Australia demonstrate consistency with the conservative international estimates applied within our study, providing support for their use within the Australian context. Prevalence was reported to be 4.9% in WA adults ≥ 60 years (5.6% in men, 4.2% in women) between 1966 and 198120 and 4.0% in adults ≥ 30 years overall (6.0% in men, 4.0% in women) attending general practice in 2000.21 Our projections suggesting a pronounced escalation in AF cases in the coming decades match similar projections for European and North American populations.7,19

Perhaps the greatest impact of escalating AF prevalence will be economic. AF is associated with a five- to sevenfold increased risk of stroke and a threefold increased risk of heart failure.22 Within an ageing population, most costs will be driven by the need to manage stroke risk (via thromboprophylaxis), prevent cardiac dysfunction and manage patients after events secondary to AF (via hospitalisation, provision of therapy and increased surveillance). Although current Australian projections predict that prevalent AF cases will almost double in 20 years, others have predicted doubling over 25–35 years in North America.7,23 This differential is likely reflective of Australian population growth over the next two decades that will be shaped by increased international migration, urbanisation and population mobility.

Some specific limitations of our work require comment. In order of importance: first, it is unknown whether the international prevalence statistics obtained from the Rotterdam Study are applicable to the Australian population and what the implications are of applying them. AF is known to be more prevalent in individuals of European ancestry,8 so the applied statistics may not translate to the increasingly multicultural Australian population. The prevalence of AF in Australian Aboriginal and Torres Strait Islanders remains unknown, but is potentially higher than in white Australians due to the increased cardiovascular disease burden within this population.24 Consequently, the selection of these international prevalence statistics may result in the over- or underestimation of prevalence within this population.

Second, increasing disease awareness, potential introduction of broad screening programs, and the ageing population will influence the incidence of AF. For example, single time-point AF screening identified an overall incidence of previously unknown AF of 1.0% (1.4% in those ≥ 65 years), of whom 67% were at high risk of stroke.25

Next, projections must be interpreted with some caution, given that certain factors may negatively or positively affect AF incidence and survival rates (fundamental drivers of prevalence). The current impact of antecedents and comorbidities of AF (eg, hypertension, obesity, obstructive sleep apnoea, diabetes, acute coronary syndrome) may change over time owing to increasing prevalence or improved therapies and management, suggesting that projections may potentially under- or overestimate prevalence, depending on the factors considered. The true prevalence of asymptomatic and paroxysmal forms of AF also remains unknown, potentially resulting in prevalence underestimation.

Finally, research will lead to acquisition of new knowledge on the natural history, treatment and progression of AF; for example, the development and introduction of novel therapeutics for management, which will have positive influences on survival. Assumptions were made when population projections were calculated; most critically, we assumed that AF prevalence remained static over time. Next, we chose population projections that largely reflect current trends in fertility, life expectancy and migration. We did not determine low and high estimates founded on alternative assumptions.

Our data provide a snapshot of the potential current and future impact of AF in Australia. They support the expectation that AF will reach epidemic proportions worldwide in the coming decades. Large-scale, population-based studies are required to ascertain the true burden of AF, including social, health and economic (direct and indirect) costs. Understanding this burden is premised on the availability of high-quality epidemiological studies. The increasing prevalence of AF will greatly influence health care systems and communities. Therefore, substantial integrated efforts to understand the complex causes and clinical presentation of AF in Australia are required to attenuate the large economic, social and individual costs associated with this potentially fatal cardiac condition.26 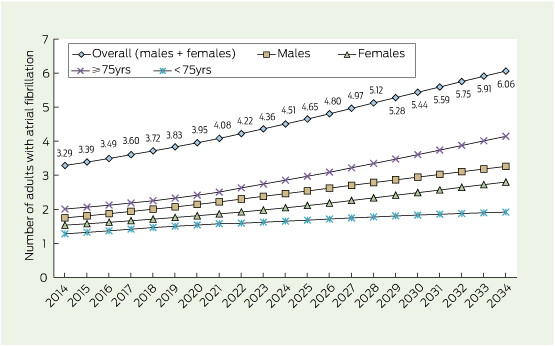 All authors are supported by the National Health and Medical Research Council (NHMRC) of Australia. This research was supported in part by the Victorian Government's Operational Infrastructure Support program. The NHMRC and Victorian Government had no involvement in the writing or preparation of this manuscript.