In 2009, the Australian Diabetes Society (ADS) published a position statement recommending individualisation of glycaemic targets.4 The general glycated haemoglobin (HbA1c) target for most people with T2D is ≤ 53 mmol/mol (7%), however:

Despite the increasing range of therapies available, achieving glycaemic targets can be difficult. To assist with selecting glucose-lowering pharmacotherapy for people with T2D, the ADS developed this position statement (Box 1). Its aim is to describe the place of the various drug classes in the glucose-lowering therapeutic algorithm (Box 2), drug options in the setting of renal impairment (Appendix 1) or hepatic impairment, the Pharmaceutical Benefits Scheme (PBS) prescribing restrictions for obtaining subsidised products in Australia (Appendix 2), and the current PBS-subsidised and unsubsidised costs (Appendix 3). A more detailed version of the statement that will be updated annually is available on the ADS website (http://www.diabetessociety.com.au).

Metformin decreases hepatic glucose output, lowers fasting glucose levels and is generally weight-neutral. It decreases HbA1c level by up to 15–22 mmol/mol.5 Gastrointestinal side effects are common. Metformin should be started at low doses and titrated. People with gastrointestinal side effects should be offered one of the slow-release formulations, which cost about 40% more per dose (Appendix 3). Metformin is contraindicated for patients who have severe renal, hepatic or cardiac failure (Appendix 1).

Sulfonylureas have favourable long-term safety and outcome data and are cheap and effective, with decreases in HbA1c level of up to 7–16 mmol/mol when combined with metformin.6-8 They trigger insulin release in a glucose-independent manner. Their main side effects are hypoglycaemia and weight gain. The risk of hypoglycaemia is highest with sulfonylureas with long half-lives and renally excreted active metabolites, such as glibenclamide.7

Dipeptidyl peptidase-4 (DPP-4) inhibitors decrease inactivation of glucagon-like peptide-1 (GLP-1), thereby increasing its availability. GLP-1 improves β-cell function and insulin secretion and slows gastric emptying. A meta-analysis reported decreases in HbA1c level of 7–8 mmol/mol, except for vildagliptin (11 mmol/mol).9 Common side effects include gastrointestinal disturbance and nasopharyngitis, which often subside over 10–14 days. Rash is a rare but potentially serious side effect. Postmarketing surveillance has reported an association between DPP-4 inhibitors and pancreatitis. People with diabetes have an increased background risk of pancreatitis and it remains unclear whether DPP-4 inhibitors augment this risk.10

At the time of writing, there were five DPP-4 inhibitors available in Australia that were approved for PBS-subsidised use with either metformin or a sulfonylurea but not both. Triple therapy and monotherapy are not PBS-subsidised; nor is dual therapy with insulin or sodium–glucose cotransporter 2 (SGLT2) inhibitors (Appendix 2).

Thiazolidinediones (TZDs) are transcription factor peroxisome proliferator-activated receptor PPARγ agonists, which lower BGL through insulin sensitisation. Side effects include weight gain, fluid retention, heart failure and an increased risk of non-axial fractures in women.11 Pioglitazone is associated with an increased risk of bladder cancer. In a limited number of people, TZDs combine well with metformin and sulfonylureas.

Acarbose is an α-glucosidase inhibitor that slows intestinal carbohydrate absorption and reduces postprandial BGL. Its main side effects are bloating and flatulence, which lead to discontinuation in up to 25% of people. If tolerated, it can be effective, particularly when combined with metformin.

Two SGLT2 inhibitors (canagliflozin and dapagliflozin) were listed on the PBS in 2013. These drugs inhibit a renal sodium–glucose cotransporter to produce urinary glucose loss and decrease BGL. Urinary glucose loss is the mechanism for the weight loss associated with these drugs. Side effects include dehydration, dizziness and increased risk of genitourinary infections. The first two can be prevented with adequate fluid intake, and the latter diminished with meticulous hygiene. Use with loop diuretics should be avoided. SGLT2 inhibitors have diminished efficacy in people with renal impairment. PBS reimbursement requires use with metformin or a sulfonylurea but not both.

GLP-1 receptor agonists (GLP-1RAs) are administered by subcutaneous injection. They stimulate β-cell insulin release and slow gastric emptying, which contributes to weight loss but may cause nausea and vomiting. Effects on BGL are slightly superior to those of oral agents. An increased risk of pancreatitis (about 50% above a baseline of one to two episodes per 1000 patient-years in T2D) has been reported.10 These agents should be avoided in patients with a history of pancreatitis or pancreatic malignancy.

Insulin has extensive effects on metabolism and is generally necessary for cellular glucose uptake. Short-, intermediate- and long-acting insulins are available, as well as premixed preparations. The major side effects are hypoglycaemia and weight gain. In many people, insulin is initiated only after an unnecessarily prolonged period of hyperglycaemia. Insulin is the most potent glucose-lowering agent. With adequate dosage and dietary adherence, it can almost always achieve target BGL. Insulin should be considered early if BGL is very high.

The algorithm in Box 2 summarises the available clinical evidence for pharmacotherapeutic strategies to achieve target HbA1c levels in people with T2D. At each step, there are proven and effective approaches. Indications that may be PBS-subsidised are highlighted in the algorithm by a red border. It should be noted that use of a medication outside PBS-approved indications requires that it be purchased through private prescription. The current cost of these medications is given in Appendix 3. The algorithm is structured with a usual approach to treatment initiation, and intensification and alternative approaches at each stage.

First-line treatment is appropriate diet and exercise. This should be reinforced at every stage. Both weight loss and prevention of weight gain are important.

When lifestyle measures alone no longer achieve desired targets, metformin should be added if there is no contraindication. If metformin is not tolerated or is contraindicated, a sulfonylurea should be used. Other medications are also available but, apart from acarbose and insulin, are not PBS-subsidised as initial treatment.

If glucose control is not achieved with a single agent, there are many second-line treatment options. Sulfonylureas are good second-line agents, achieving similar decreases in HbA1c level as other second-line oral agents, for about 25% of the daily cost (Appendix 3). For patients who experience problematic hypoglycaemia, weight gain or other side effects, an alternative agent should be considered. The most common alternative second-line agent is a DPP-4 inhibitor. These are available in combination tablets with metformin, which may improve compliance.

SGLT2 inhibitors are another option and are PBS-subsidised with either metformin or a sulfonylurea. Addition of acarbose is another second-line alternative. GLP-1RAs can also be used with metformin or a sulfonylurea as second-line therapy. As always, insulin is an option that should be considered, especially if the HbA1c level is > 75 mmol/mol (9%) after use of an oral agent, as the likelihood of achieving good glycaemic control with oral agents alone becomes lower.

After failure of dual oral therapy, treatment options become more complex. Metformin should be continued for its insulin-sensitising effects unless contraindications develop. Ineffective therapies should be ceased and substituted with a different medication. Comparative evidence from RCTs to inform prescribing is scarce. The options are triple oral therapy or the addition of a GLP-1RA or insulin.

Metformin, sulfonylurea and DPP-4 inhibitor: Limited RCTs examining the addition of sitagliptin12 and linagliptin13 to metformin–sulfonylurea have demonstrated reductions in HbA1c level of 7–10 mmol/mol versus baseline and placebo, respectively,12,13 but with small increases in weight that are significant in some studies. With triple therapy, the advantage of lower risk of hypoglycaemia with DPP-4 inhibitors appears to be lost.12,13 It is reasonable to escalate from metformin and a sulfonylurea or metformin and a DPP-4 inhibitor to triple therapy with all three. However, this combination is not currently PBS-subsidised.

Metformin, sulfonylurea and acarbose: Acarbose is PBS-approved for triple therapy with metformin and a sulfonylurea. One double-blinded crossover trial of this combination reported a 1.9% decrease in weight and a 15 mmol/mol decrease in HbA1c level with the addition of acarbose.15 Acarbose in other dual-therapy combination studies more commonly decreases HbA1c level by about 6–9 mmol/mol.16

Metformin, sulfonylurea and GLP-1RA: Triple-therapy studies of metformin, a sulfonylurea and a GLP-1RA are few but show reductions in HbA1c level of about 11 mmol/mol, with a little weight loss.17-19 Hypoglycaemia is common but may be attenuated by reducing sulfonylurea dosage. The available GLP-1RAs have approval from the Therapeutic Goods Administration for use with metformin and sulfonylurea, but only exenatide is PBS-subsidised.

Insulin: Insulin can be used at any stage in the treatment cascade. It is commonly initiated as once-daily basal insulin added to oral drugs, particularly metformin. Alternatively, it can be initiated as once- or twice-daily premixed insulin, again usually in combination with metformin. Insulin therapy can be intensified by combining long-acting insulin with multiple injections of short-acting insulin.

Recent studies have explored combining insulin with newer therapies, including DPP-4 inhibitors, SGLT2 inhibitors and GLP-1RAs, with good effect. These combinations are not PBS-subsidised.

Glucose-lowering therapy in people with renal or hepatic impairment

In the setting of renal dysfunction, pharmacokinetic changes develop that may increase the risk of hypoglycaemia and side effects. Changes are most evident with chronic kidney disease stages 4 and 5, and must be considered when deciding on therapy (Appendix 1). Drug doses may need reduction or cessation. Among the oral agents, glipizide and gliclazide can be used at a reduced dose up to stage 4, as can sitagliptin. Linagliptin is acceptable without dose adjustment, even with dialysis.

Liver disease may also affect pharmacokinetics. Most drugs do not need discontinuation in the setting of mild–moderate hepatic impairment. Drug half-lives, doses, interactions and risks of drug-specific adverse effects should be considered. There is little experience with use of the newer drug classes in people with advanced hepatic impairment.

In older people, glycaemic targets need to be moderated in light of life expectancy, cognitive impairment or frailty.4 This may mean that the glycaemic target should be symptom control only, or ≤ 64 mmol/mol (8%). Assessment of estimated glomerular filtration rate is important, as serum creatinine level is not as reliable a marker of renal function. Cardiac dysfunction is more common in older people, and severe congestive cardiac failure is a contraindication to metformin. Use of multiple drugs should prompt regular review, to minimise polypharmacy. Drugs should be used at the minimum doses needed to achieve practical and safe glycaemic targets.

Diabetes is a progressive condition and, as such, glycaemic targets should be reviewed at regular intervals. The importance of diet and exercise should be reinforced at each step of the therapeutic pathway.

With the range of therapies now available in Australia, there is considerable scope for individualising therapy. If the patient experiences adverse effects with one glucose-lowering agent, another should be substituted. This will often take the form of combination therapy. With diabetes education and an engaged patient, it is now possible to achieve good glycaemic control in more people with T2D.

The Australian Diabetes Society (ADS) council appointed the authors to draft the position statement, with a focus on results of recent trials of triple therapy and newer agents.

The draft statement was reviewed by the current ADS council and revised, then sent to all ADS members for comment and revision. 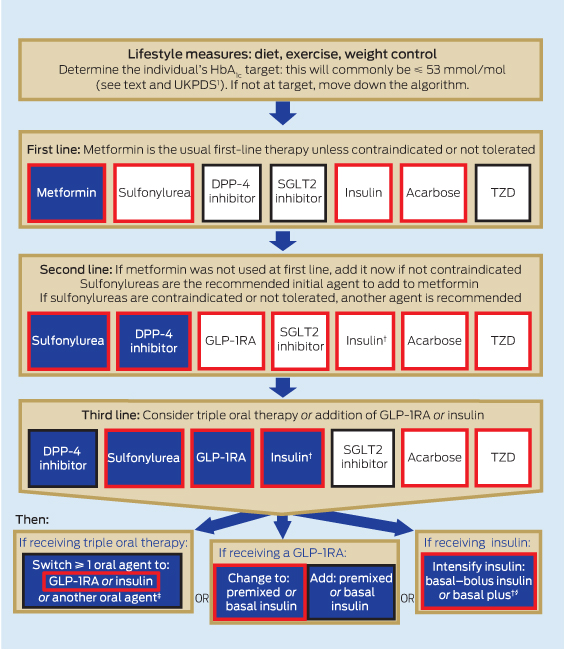 † Unless metformin is contraindicated or not tolerated, it is often therapeutically useful to continue it in combination with insulin in people with type 2 diabetes.

‡ Switching to another oral agent is likely to have the smallest impact on glycaemia.

We thank Jennifer Conn and Merryl Koschade for help with reformatting the treatment algorithm, and the ADS membership for their comments on the position statement.